It gets easier, right? (Bogota to Villa de Leyva)

My phone was telling me to turn left. “A la isquierda,” the voice in my head repeated several times in Spanish. I’m not sure why my GPS app was set to Spanish, but it didn’t hurt. To my left was what would barely qualify as a farmers track. That couldn’t be right, I thought.

I stopped and pulled out my phone to take a look at the map. It wanted me to go left in order to make a U-turn. I had just enjoyed a wonderful, paved, five-kilometre downhill cruise, and now I was being told I missed a turn and had to go back up. “Are there other options?” I wondered.

I looked at my Open Street Maps (OSMAnd) app and it did show I could follow some roads back to the main highway and onward to my destination of Villa de Leyva. Or I could turn around, go back up, and follow the route that I originally plotted. I chose option B, since it was a little shorter, and turned around and slowly retraced my tracks, plodding uphill through the same sweeping curves I’d just come down so merrily. This time I wasn’t as merry.

Soon, I saw where I went wrong. The turn I missed pointed me straight up an impossibly steep dirt road – no wonder I ignored it.. A sign pointing to Raquira, and another to Villa de Leyva. The latter was my destination, so up I went…

This part of Colombia is filled with endless farms.

Let’s back track a bit. That was day two of my ride from Bogota to Villa de Leyva and up until then, things had been going pretty well. I left Colombia’s capital on Sunday, enjoying the weekly Ciclovia, when they shut down the main roads for cyclists and the whole city comes out to ride their bikes. I had read about Colombia’s cycling culture and here it was on full display. I cruised north through the endless metropolis looking for Calle 85, where I would start the climb into the mountains that dominate Bogota’s eastern skyline.

The climb was my first big test and I pedaled ponderously up the six kilometre hill, gaining almost 600 metres in the process. I was passed by hundreds of cyclists young and old on all sorts of bikes. Once in a while I would crawl past someone and beam with pride; my bike weighed a tonne and was not exactly fleet of foot. Soon enough, I reached the top of the climb and pulled into a gas station to rest up. As I stopped, I was approached by a man and a beautiful young woman, both curious about my trip. I did my best in my extremely limited Spanish to explain I was on my way to Villa de Leyva and hoped to get there in two days. I couldn’t really understand them, but the woman gave me the contact of a friend in Tunja, not for from Leyva, and the man, Oscar, offered to escort me part way.

Gotta love the bike signs in Colombia. This is near the top of the hill out of Bogota.

I followed Oscar north as the road rose and fell on pristine pavement. I bombed past Oscar on the downs and he raced past me on the ups. We traveled through farmland and small towns alongside dozens of other cyclists out for a Sunday ride. It was surprisingly peaceful out here considering how close we were to the chaotic streets of Bogota. Oscar led me to a small town called Sopo, where I stopped for lunch and he continued his circuit back home to Bogota. He offered to put me up if I returned to Bogota. Unfortunately, I neglected to take his picture.

Also unfortunate, it turns out Sopo wasn’t on my planned route and I should have turned off about 10  kilometres earlier. It wasn’t the end of the world, but it did mean I hadto ride through an ugly industrial area towards the town of Zipaquira before veering off and towards another small town Nemocon. From there, the GPS track I had plotted online directed me up and over a hill to Suesca. I was a little worried as a I climbed upwards, because the road wasn’t on my GPS app. Thankfully, it connected through and after a pretty good slog, I was able to whiz downhill and grinded it out on a bumpy dirt road to Suesca, where I went looking for a campsite that was marked on my GPS. 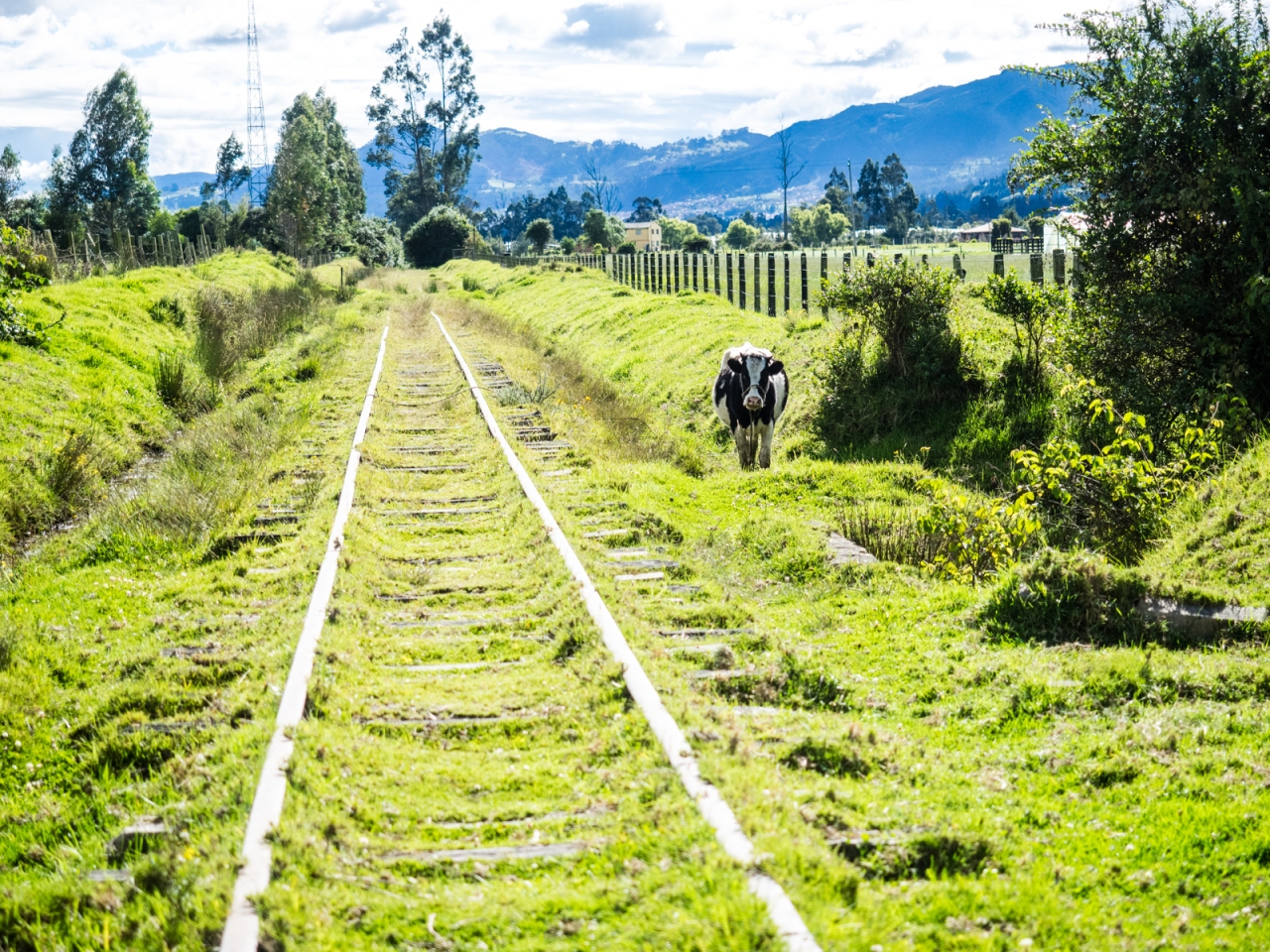 My first dog encounter happened while taking this picture. 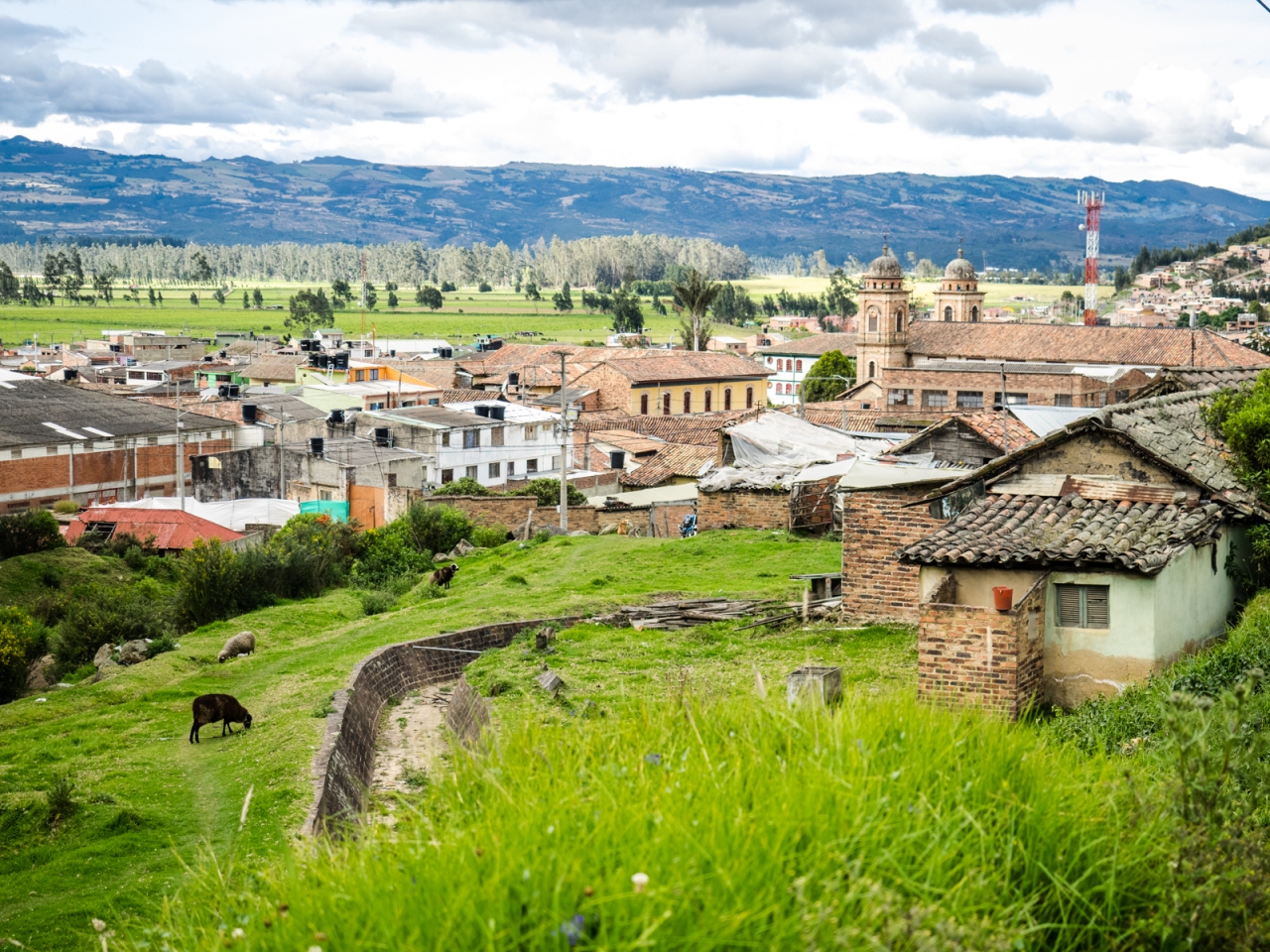 Looking back at Nemocon, a town famous for its old salt mine.

Suesca is a small, unremarkable town that happens to be next to Colombia’s rock climbing Mecca. To access the campsite, I followed an old train track, passing people on their way home from their weekend outing. I could hear the grunts of the last few climbers of the day. I was one of the only people camped there that night.

I was in bed early that night and slept fitfully while dogs barked all around. I was up at first light and started to move quickly, but packing took longer than planned. I rode out along the tracks and through Suesca, where the first brutal climb of the day awaited me.

You can see why this is Colombia’s rock climbing centre.

My Salsa Fargo, on its way out of Rocas de Suesca.

I plodded my way up the dirt road and regretted not being in better shape. It didn’t help that I started at 2,500 metres elevation on a climb that topped out at almost 3,100m. It also didn’t help that instead of following the main road, I followed the more direct side road that turned out to be so steep and muddy at points that it took all my strength to push my bike up the hill. I also had my first of many encounters with the dreaded South American canine – not the friendly kind that lopes alongside you, but the nasty one that chases after you, yapping away and threatening to bite your ankles. 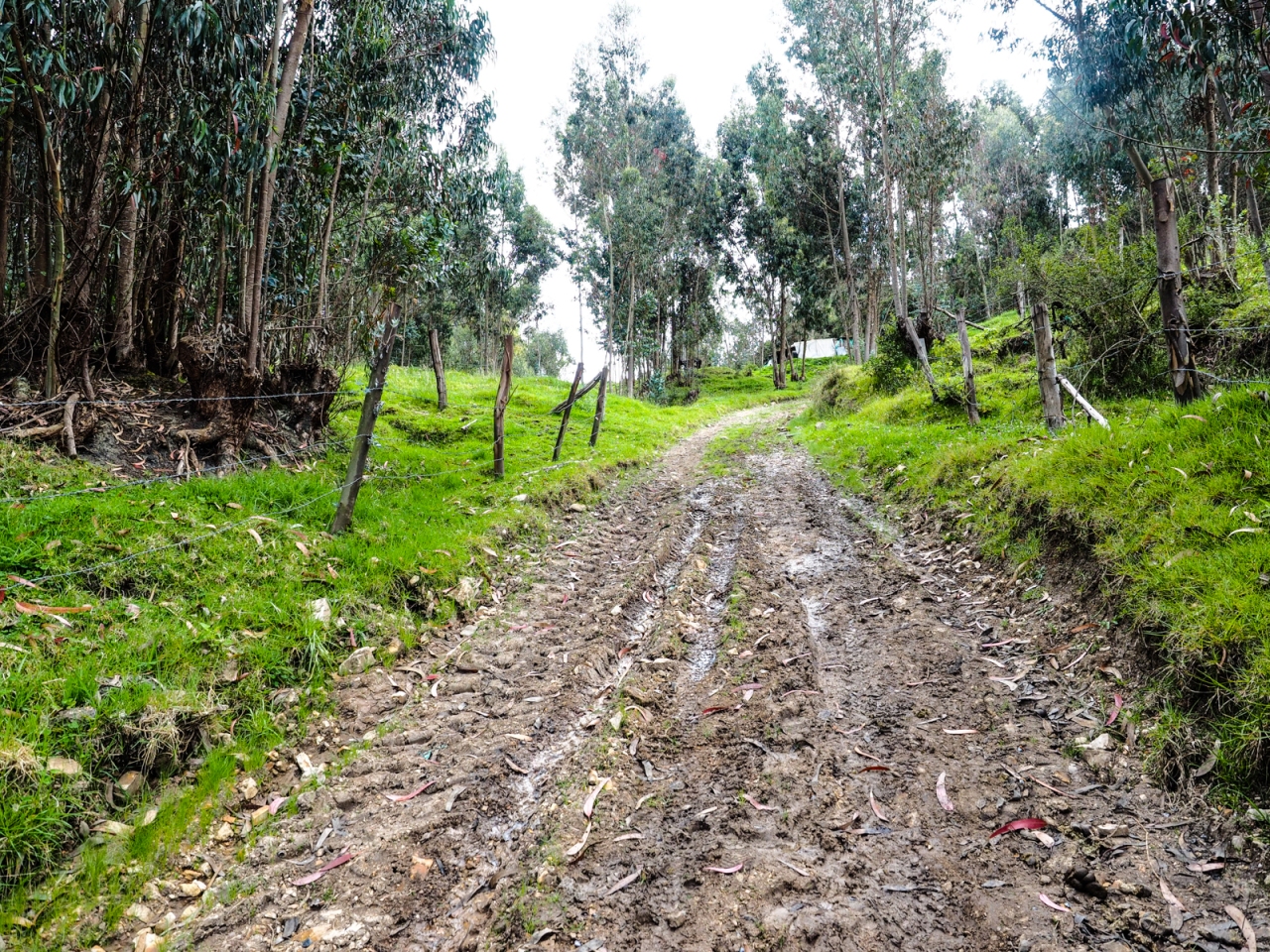 When you take the side road.

Of course, with long climbs come beautiful views and long descents. After lots of puffing and panting, I made it to the top and rode through mountainous farmland into the next valley. There, I was met with another long but steadier climb, and another descent before I arrived in Lenguazaque at noon, starving hungry and tired. I was given strange looks as I passed through, and stopped for lunch at a basic restaurant where I was served a huge bowl of potato soup and a plate of meat, potatoes, rice, veggies and fried plantains for a few dollars. It’s the plata tipica and it’s common in Colombia and perfect for the touring cyclist in that it’s cheap and more food than you could normally eat, but you’re expending as many calories as I am, you can eat everything.

The road out of Lenguazaque was paved and much busier than what I rode into town on. Big coal trucks rumbled past but the riding was easy and I cruised along with a full belly energizing me. That’s when I got carried away, missed a turn and went the wrong way downhill. It was a detour I couldn’t afford to make given the big day I was riding. 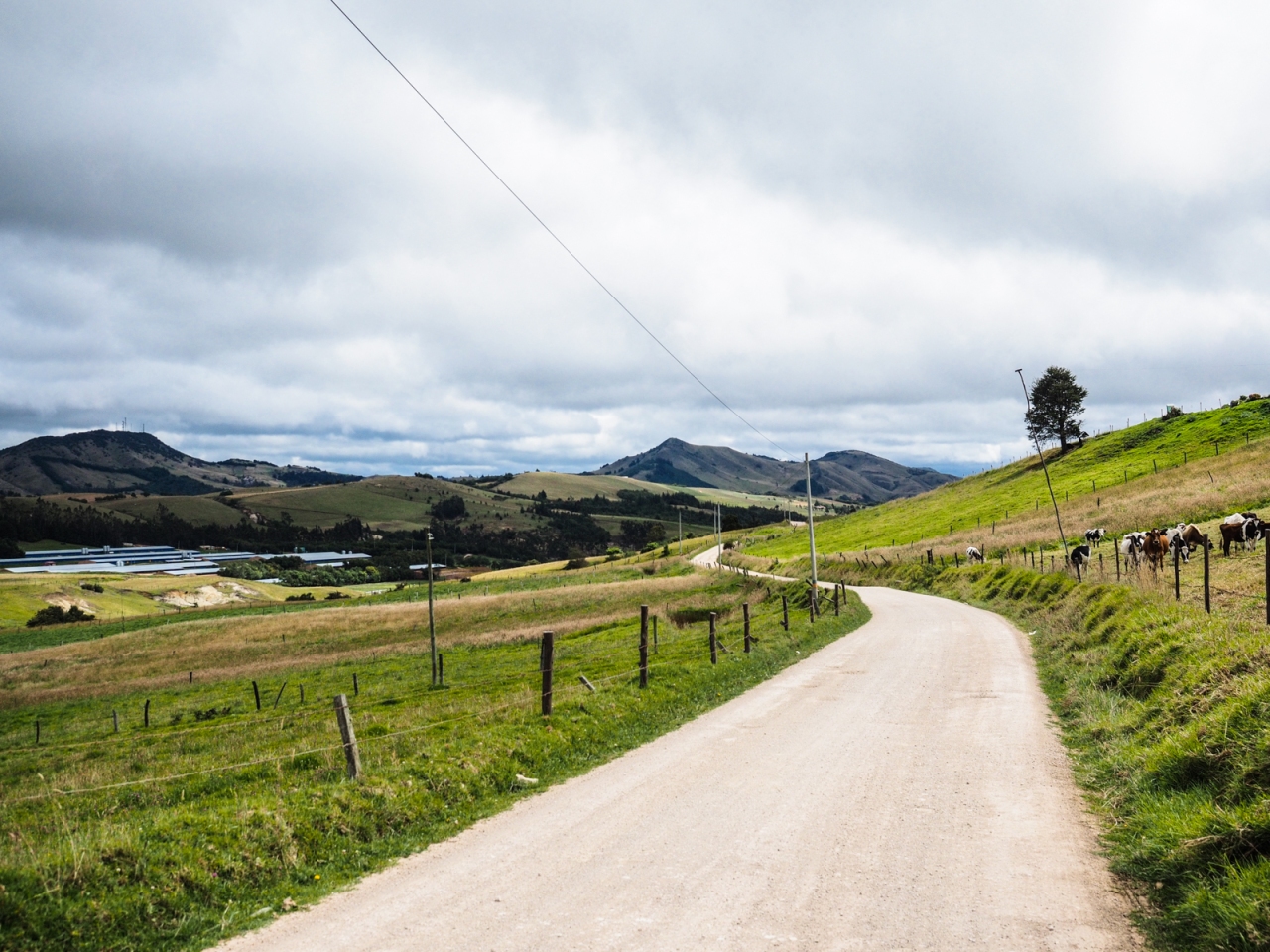 This is the type of dirt road riding I can get behind.

When I got back on route, I was greeted with another endless climb to over 3,000 metres. I stopped more times than I’d like to admit and as I neared the top, my saddle sores started to get the best of me. I rode standing up, pushed for a bit, and then stripped off my chamois and rode commando to make it more comfortable. Another lesson learned.

For a while the road cruised along a ridge top and whenever I thought the descent would start, it would go up again. I knew my destination was lower than where I started the day,  but I was crushed and couldn’t wait to start going down.

Yep, that’s a long way down.

When the descent came, it was thrilling and terrifying. The road was steep, unpaved and rocky, and I bounced along, slowing down for the switchbacks and opening up as much as I felt comfortable on the straights. I paused a few times to rest my arms and when I finally reached Raquira at the bottom of the 1,000m descent, I had to adjust my brakes because they were so worn down from controlling my overloaded bike that I was pulling the levers all the way in and still couldn’t come to a full stop.

Raquira is famous for its pottery.

By this point I was so exhausted I ignored the dirt roads my GPS wanted to send me down and hit the highway to Villa de Leyva. Given the time, I probably should have stopped in Raquira but I was determined to get to my destination. It quickly got dark and the last stretch saw me navigating a maze of farm roads with only my bike light and GPS to guide me. I arrived in town in the dark and still had one good hill to climb to get to the the hostel I wanted to stay at. I pulled in completely shattered after a day that was far too ambitious.

At the hostel I was faced with the ultimate dilemma: whether to eat, shower, or drink a beer first. I did C and B together, then had a quick, cold shower to get the sweat off before going to bed.

I woke up this morning thinking I would have an easy day in the saddle. Instead, after enjoying a free coffee, I decided to rest up. It’s still early in my trip and I’m not really in that much of a rush. I was also pretty exhausted after yesterday. Instead, I lazed around, wandered into town to check out the largest central square in Colombia and bought some groceries. Then I walked back up to the hostel, found a hammock and that’s about it.

You can find the GPS track for this route here: https://ridewithgps.com/trips/20078480 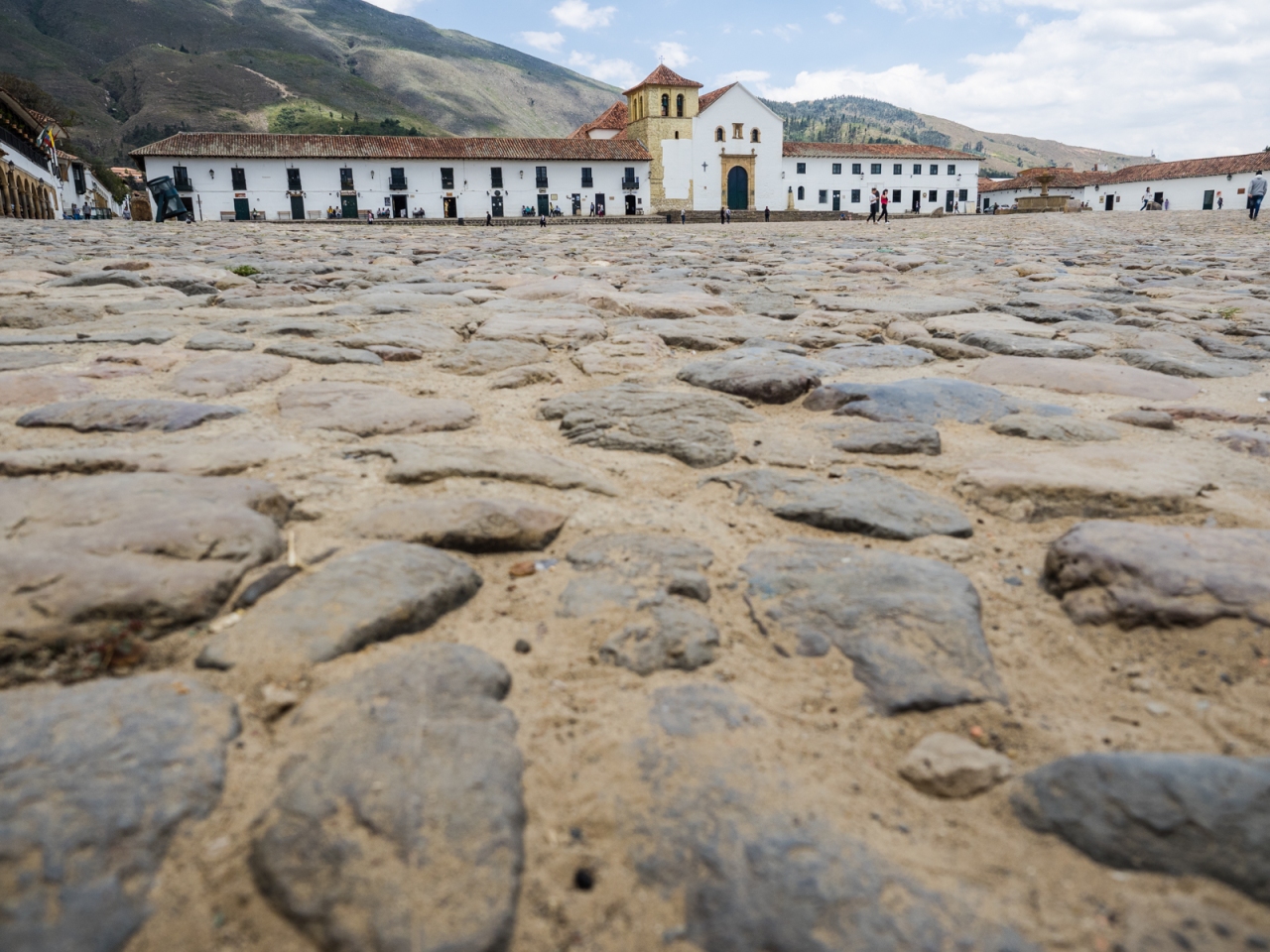 Tomorrow it’s off to Paipa for some hot springs, then I’m going to make way up to San Gil, the so-called adventure capital of Colombia.

Before that, here’s the cutest picture ever. The dog is named Terix and he and his owner have been motorcycling around South America for two years and counting. Follow their adventures here: https://www.facebook.com/terixpelomundo/