Manizales and the return to dirt

(Note: My laptop won’t charge so I’m posting this from my phone.  For some reason the photos are showing up in the wrong order.)

Until a few days ago, I’d never actually cried tears of joy. The other day, while biking at 4,000 metres in Parque Nacional Nevado del Ruiz, I welled up. It was the combination of the grueling six-hour climb to get there and the sheer beauty off the mountains shrouded in clouds that did it. As I rode along, I felt so elated at the scenery around me that I worked so hard to experience. The awe overwhelmed me as I pedaled through open fields under 5,000-metre high mountains. I cried, and definitely wasn’t ashamed. 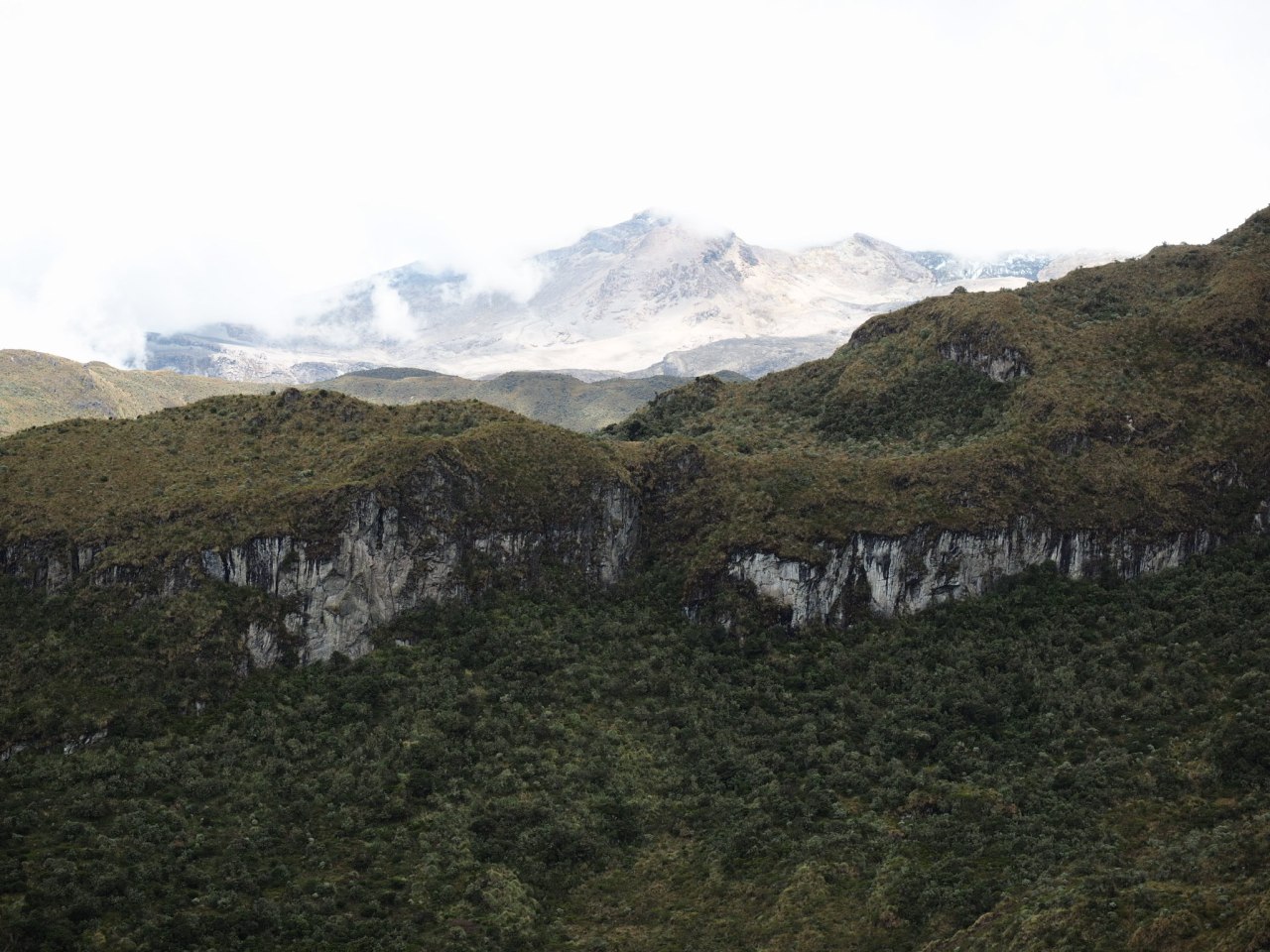 A taste of Nevado del Ruiz.

I’m in Salento right now, a quaint tourist town in the heart of Colombia’s main coffee growing region. It’s on the Gringo trail and I’ve pitched my tent at a beautiful hostel with incredible views overlooking the surrounding farmlands. Getting here from Manizales was a 2.5-day affair, including the hardest day of my trip yet. It didn’t have to be that way. I had two options to get here from Manizales – a one day cruise down the highway, or a multi-day journey up dirt roads and into the mountains. If you’ve been following this blog, you know there was really only one option.

Let’s start in Manizales. It had big city energy but wasn’t overly hectic and I enjoyed the vibe. My trip there was crushing so I spent my first day looking for some chammy cream, a decent lunch, and relaxing at the Kaleidoscopo hostel. I wanted to rest up for a planned day trip on my bike to Nevado del Ruiz. 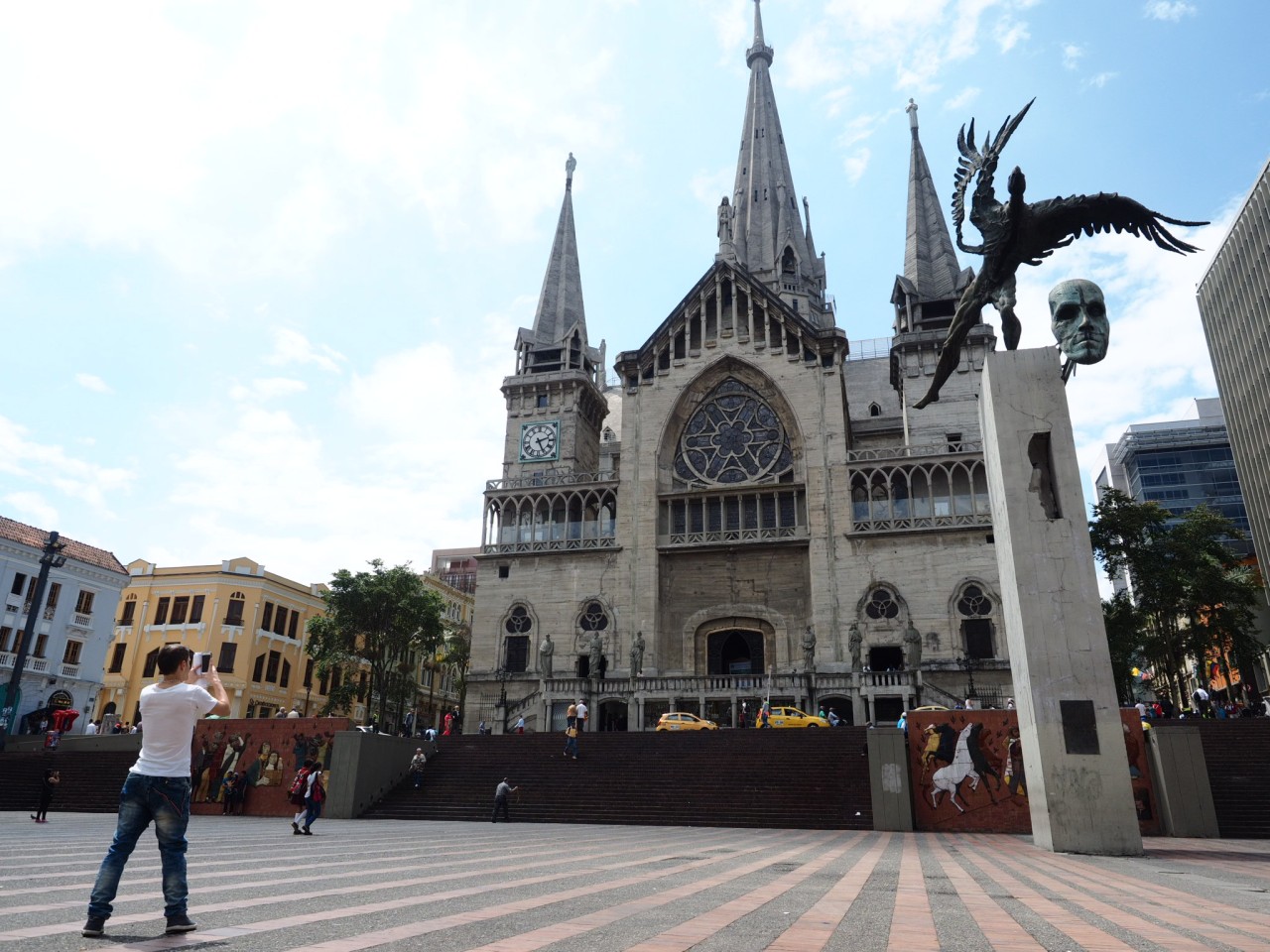 The next day I was up early and jumped on my bike for a ride into the national park. For once, I could ride it unloaded. My initial plan was to go up the highway into the park, then down the old road back town, with a stop at some hot springs on the way back. I was examining the route, I noticed a back road on Open Street Maps that would take me to the top of the pass, so I decided to go that way instead of the busy highway.

At first I was loving my decision. I rode out of the city on to a pleasant country road filled with mountain bikers. Then there was a gate, but lots of tire tracks went around it and a local said I was good to keep going. Slowly, the road narrowed and turned into a mellow double track. Then it went to single track.  Then it got steeper.

Then it turned into the most punishing hike-a-bike I’ve ever put myself through. The track resembled a slick creek bed more than anything else and I dreaded the potential of rain, which would have made it downright dangerous. At first it wasn’t too bad, but by the time I knew I should have turned around, I had reached the point of no return. No matter which way I went, I knew I wouldn’t make it to the national park. Going down would have been easiest, but I had already worked so hard, so I kept going up, waiting for the views to open up. Tangled roots, muddy trenches, and piles of wet rocks, slowed my upwards progress. 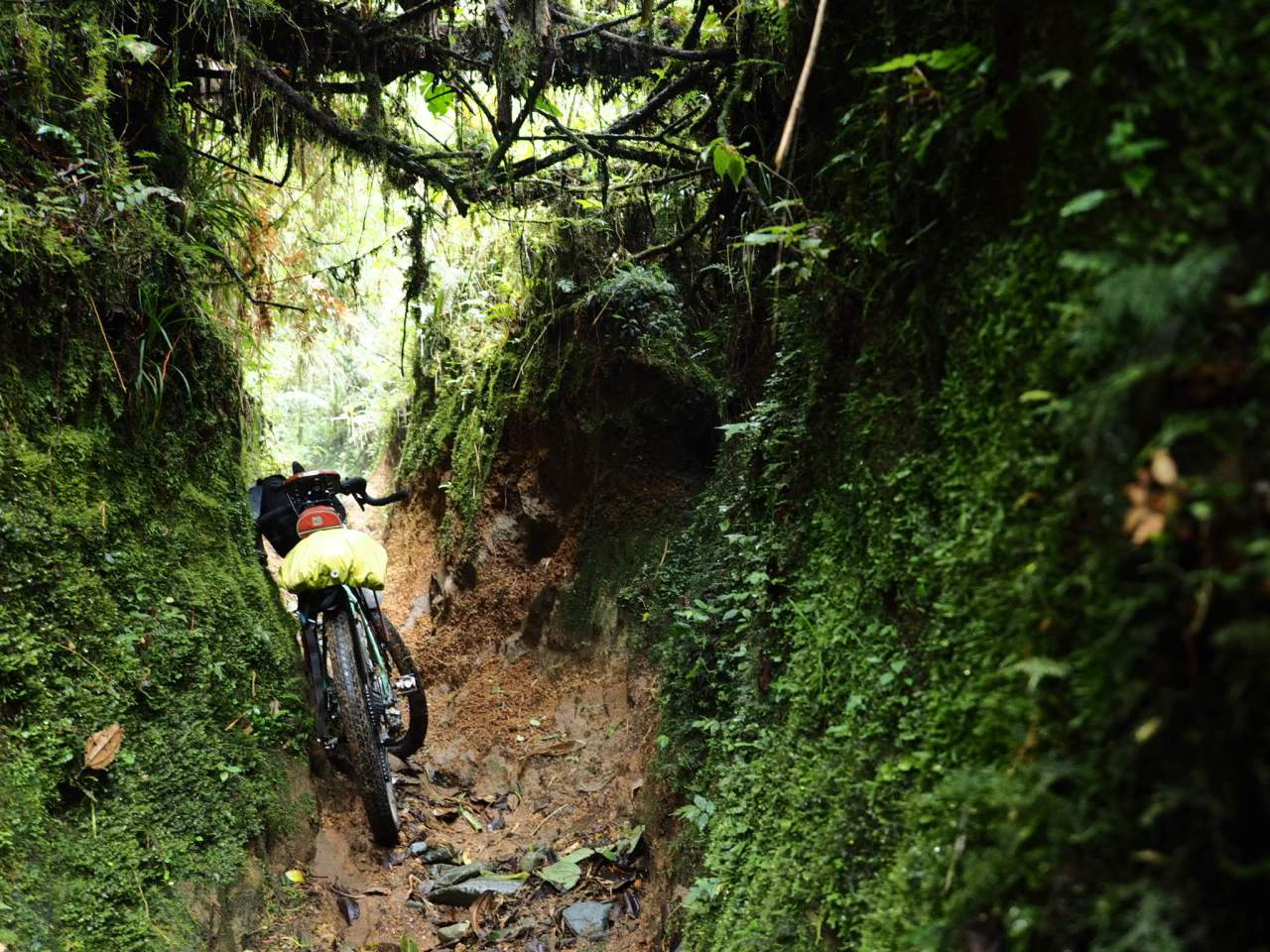 I continued to haul my bike up and over rocks and roots as I struggled to keep a grip on the muddy floor. At times the track was so narrow I had to carry my bike on my shoulders and shuffle sideways so it wouldn’t get tangled in the jungle brush. I measured my progress in tens of metres. Once in a while the trail would pop out into a farmers field, but the clouds obscured most of the views. I had to scare away an angry dog and stare down a curious cow to progress.

Finally, after hours of pushing I reached a dirt road, which I followed to the highway at Letras Pass (coming from the east this pass marks the top world’s longest hill climb). I devoured a late lunch and got back on my bike as the rain I feared all day materialized. I put on my rain gear and proceeded to bomb down the highway, dropping some 1,700 metres vertical back to Manizales. I went for a soak at some hot springs, then returned to the hostel for dinner and bed after a far more exhausting day than planned. 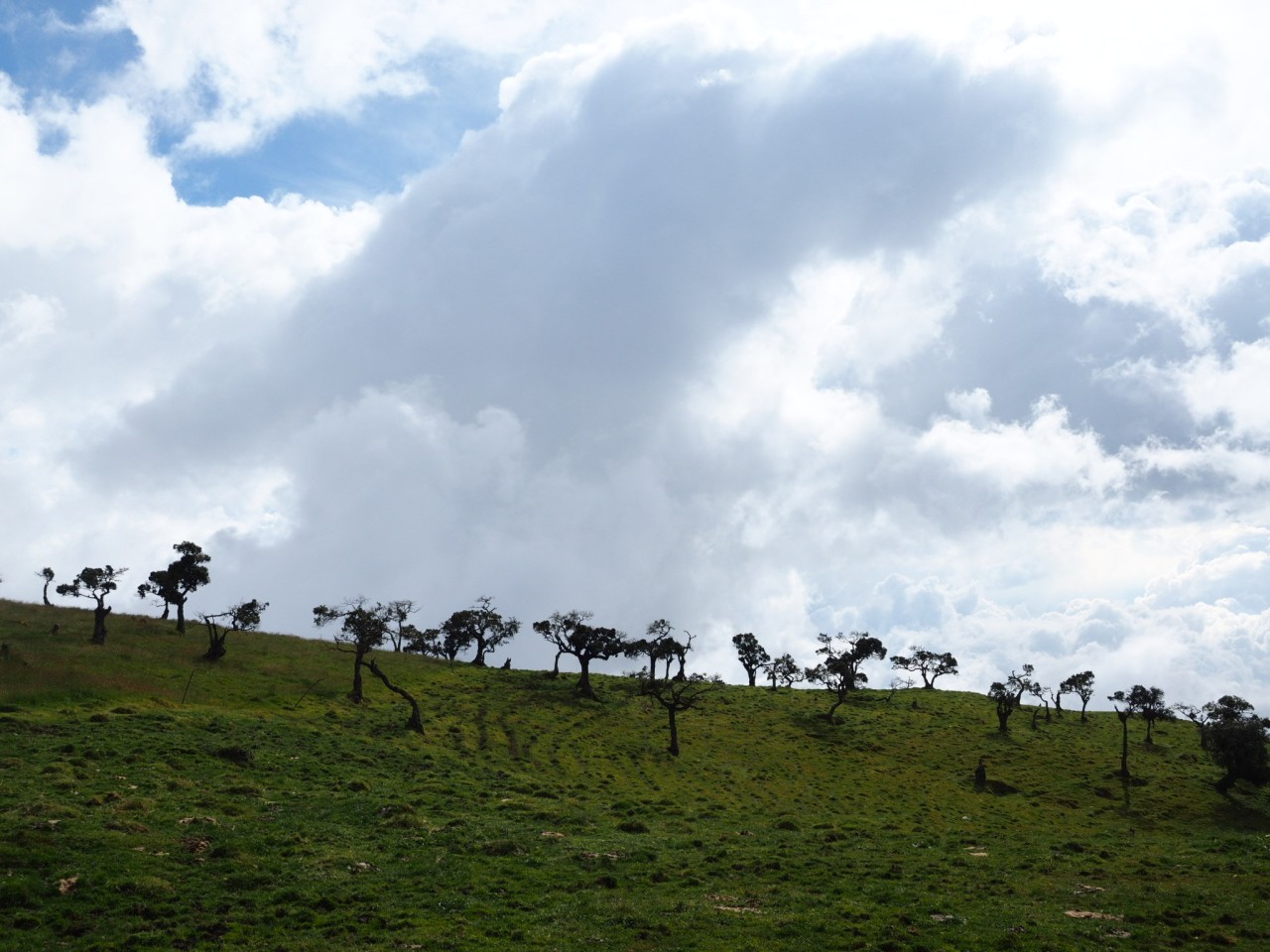 Views from the alpine. 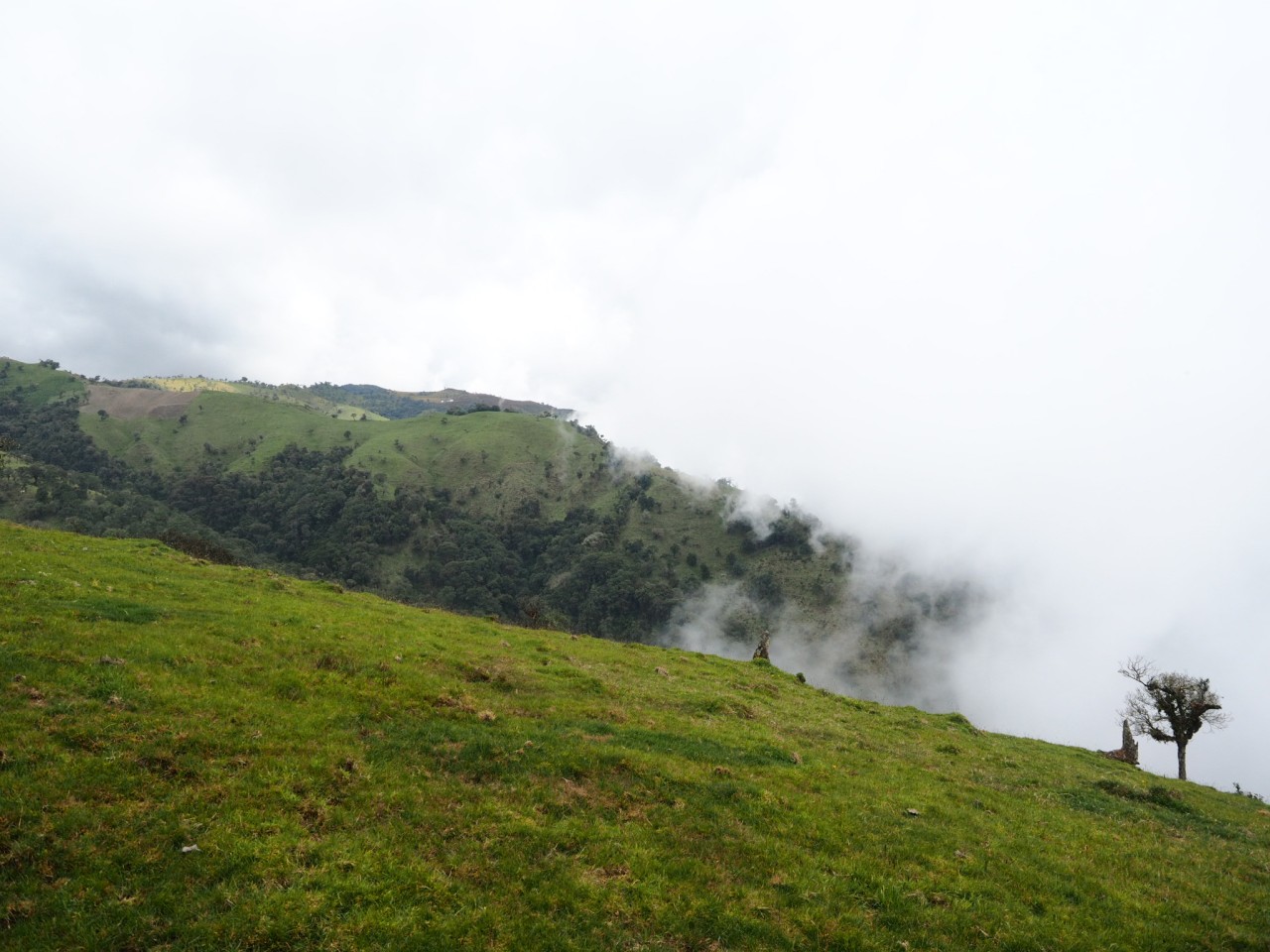 The next morning I debated my route options to Salento – the easy way or the hard way. Normally, the hard way is a no-brainer, but after yesterdays ordeal, the easy way tempted me. Of course, I chose the hard way, determined to make it to Nevado del Ruiz after the previous day’s failure. My goal was a modest 25 kilometres on day one to a campsite a little closer to the park. It was a fairly mellow afternoon, with only about 500 metres of climbing to the campground. 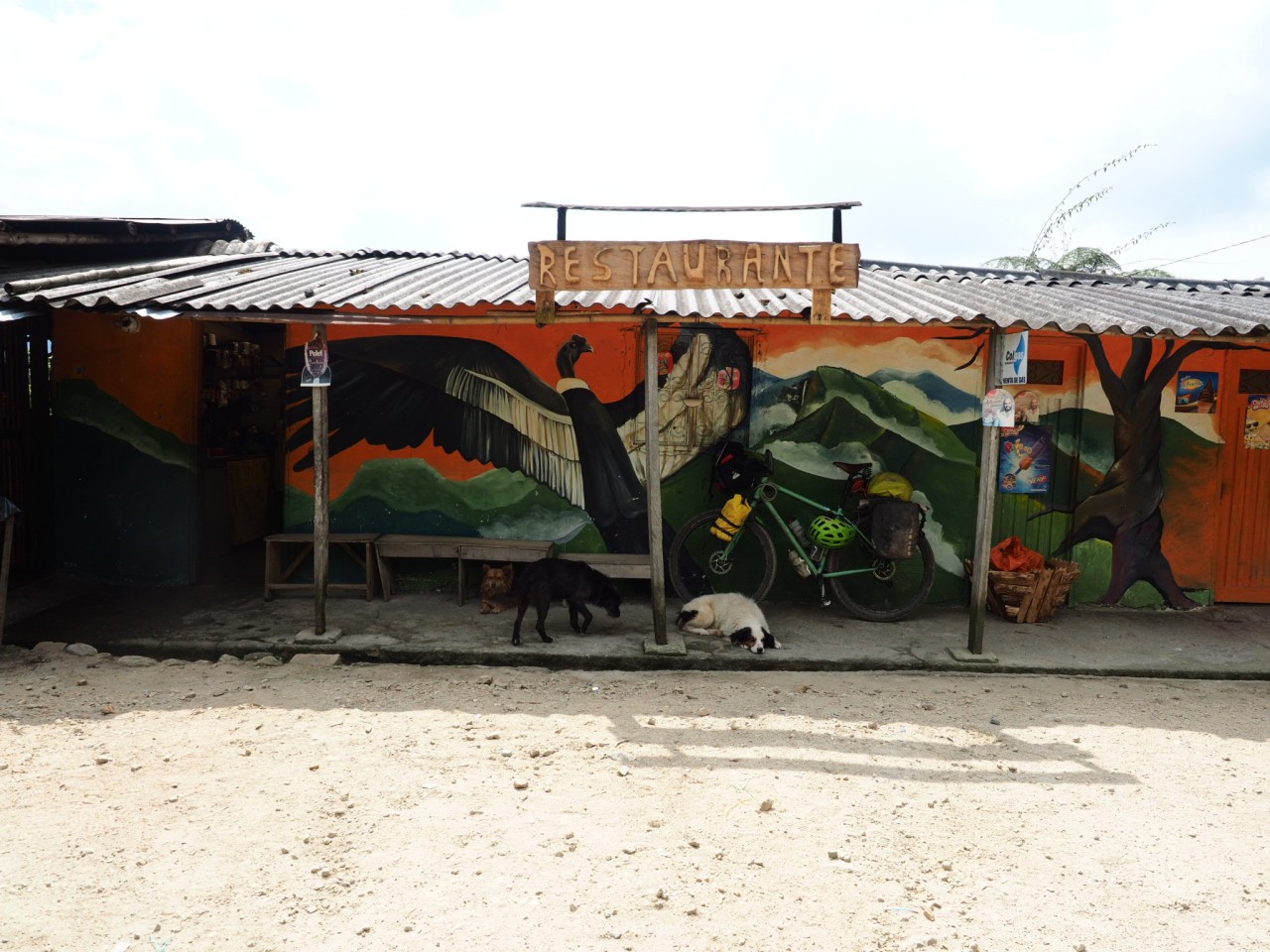 Fortunately, there was a restaurant on the way up.

Sunday turned into my biggest climb of the trip. The campsite was only at 2,300 metres and I’d be going up to 4,000 metres in the span of about 20 kilometers all on dirt, which is pretty ridiculous. It was slow going as I sought to keep a steady pace to the top. I was able to get into a groove but periodically the road would get impossibly steep, which was made worse by the fact the road surface would degrade in direct proportion to the steepness of the slope. When it got too loose and rocky, I would get off and push.

Still, the return to these quiet dirt roads that meandered through farmers fields renewed my riding spirits after spending the previous segment of trip spinning my wheels at the edge of a busy highway. The scenery got more and more incredible as I cycled upwards towards the peaks of the national park. The clouds flowed in and out of the mountains and through the fields, adding drama to the landscapes.

It took me about five hours to reach the entrance to the park and I was extremely hungry, having not packed enough snacks in anticipation of running into a store or restaurant on the way up. The park warden at the gate working was extremely kind and offered me some agua panela (a warm drink made from sugarcane juice) and bread. She warned the next section would be really steep, something I was bracing for based on the squiggly switchbacks on my map and the cliffs that loomed ahead. A bit more pedaling and a bit more pushing and I reached the top. My phone said I was at 4,011 metres, the first time in my life I’d cracked 4,000 metres. I celebrated by collapsing by my bike at the side of the road. 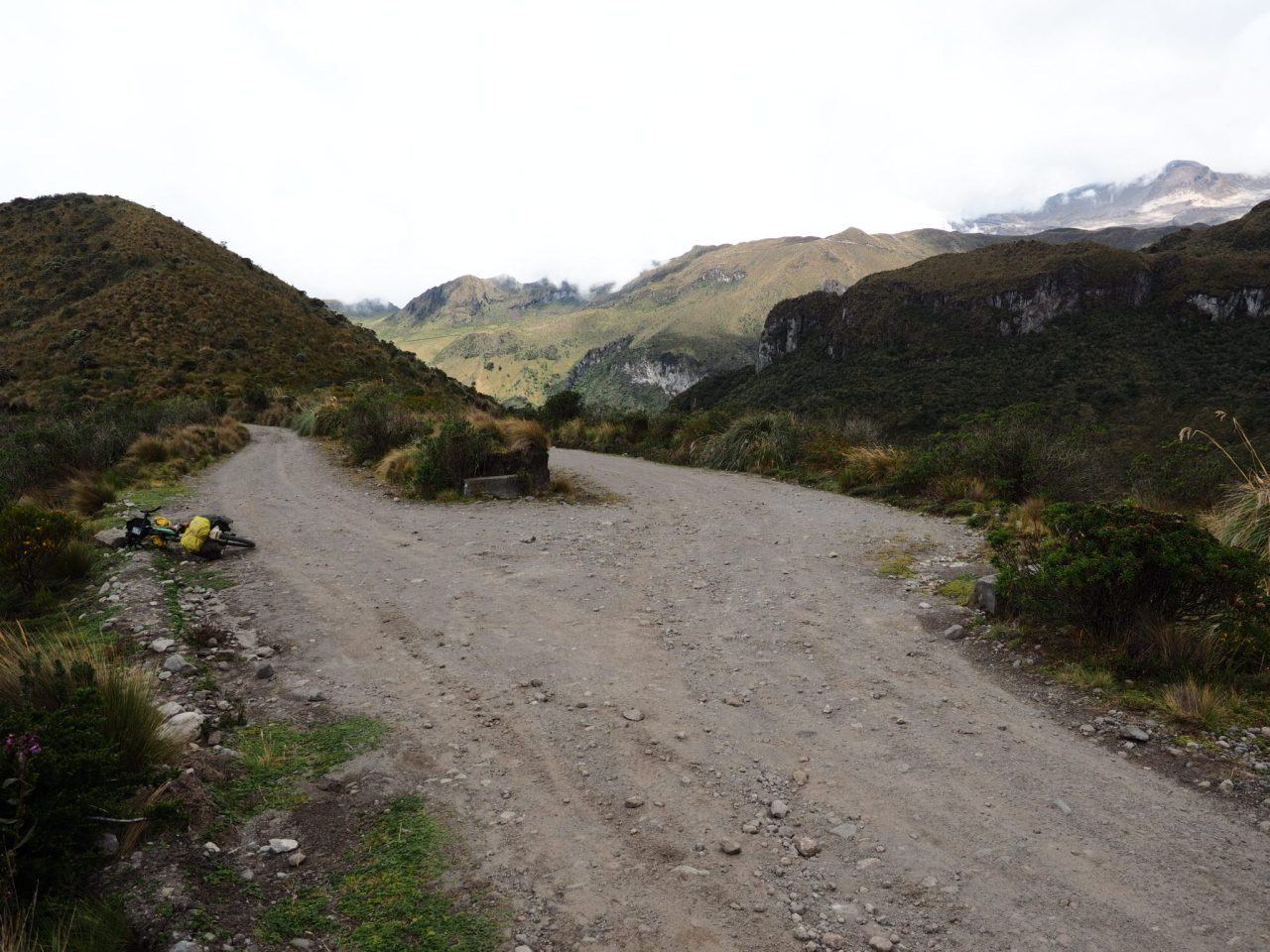 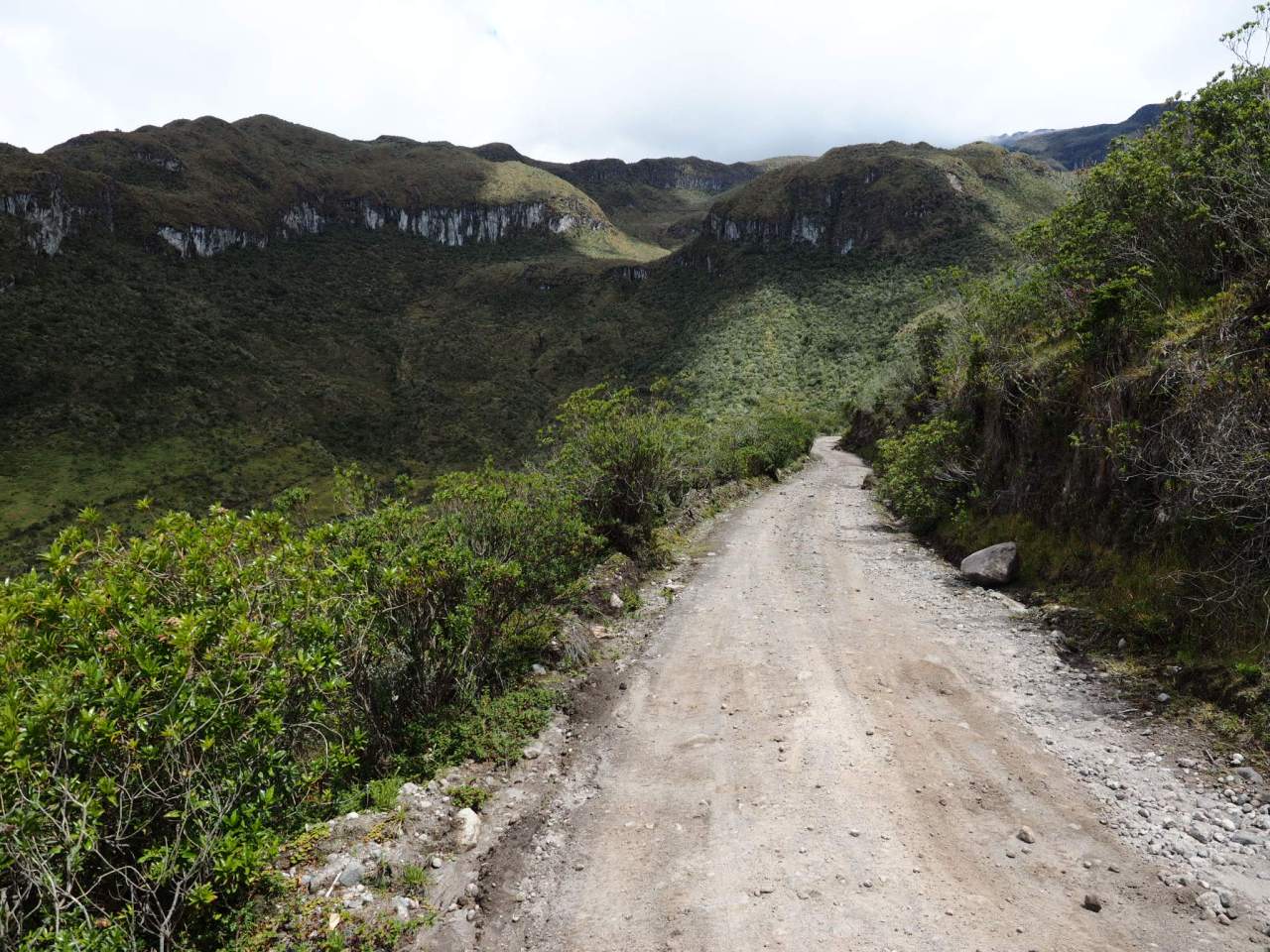 I ate my last chocolate bar when two jeeps filled with tourists rolled past. I got a few cheers and was handed a bag of snacks that I ate as I admired the view. I could see patches of snow in the distance, though the peaks of the glaciated volcanoes that make up the park were hidden from view. 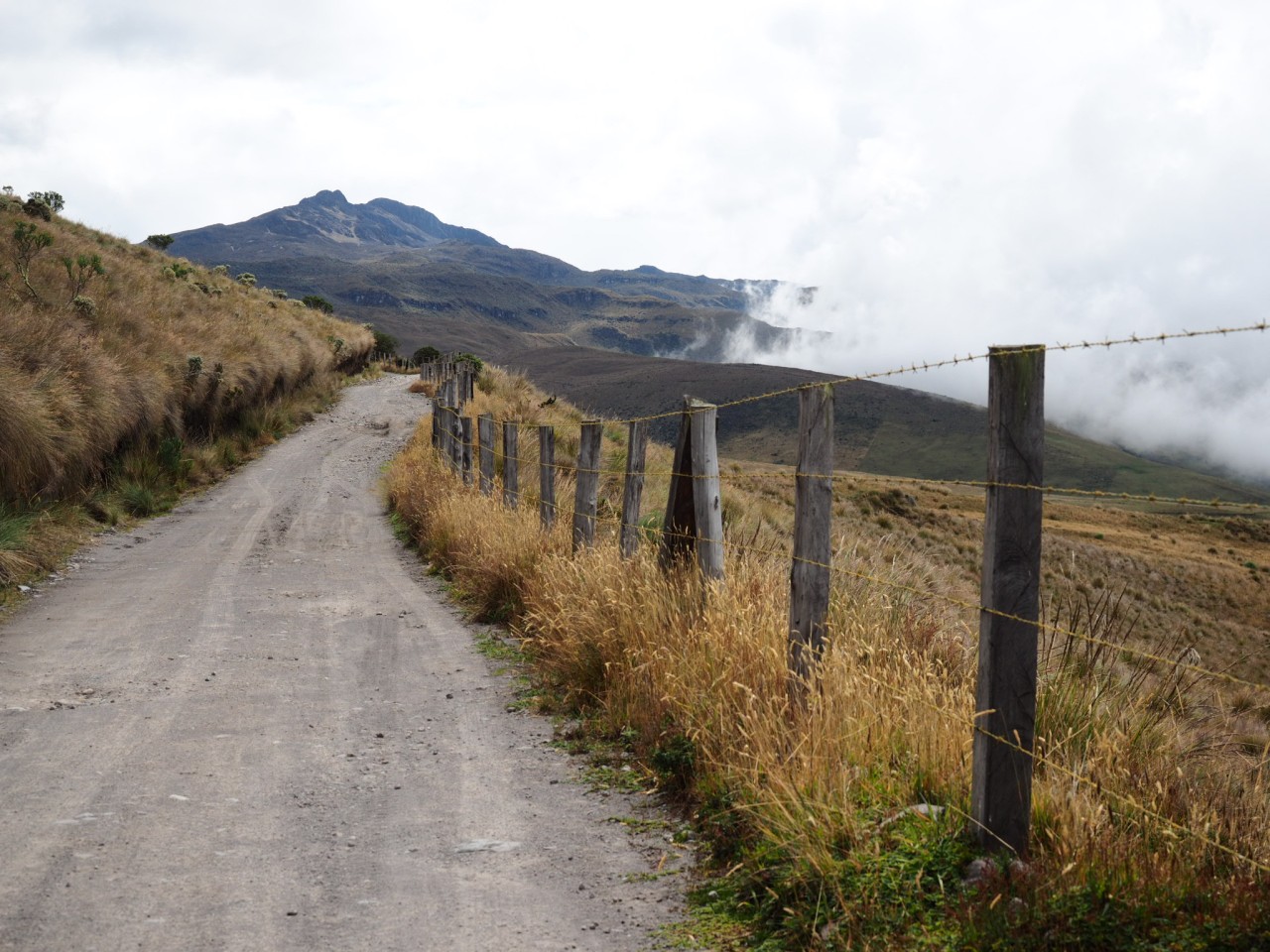 I rode on through the alpine, a big smile on my face. The clouds danced across the mountains, opening one amazing scene after another. I reached a ranger station where the staffer greeted me and pointed me to a restaurant a few hundred metres away. Starving, I was elated. To be completely honest, this is where I shed tears of joy. (What I didn’t mention above, it’s that being able to finally eat is what really got me crying.) There was several jeeps parked there while members of a Colombian women’s mountaineering club dined following their ascent of nearby Nevado Santa Isabel. I joined them and debated camping there. Two things stopped me. One was that stopping there would mean a huge effort the next day to get to Salento. The other was there was a hot springs with camping at the bottom of the mountain. In the end I was lured by hot springs. 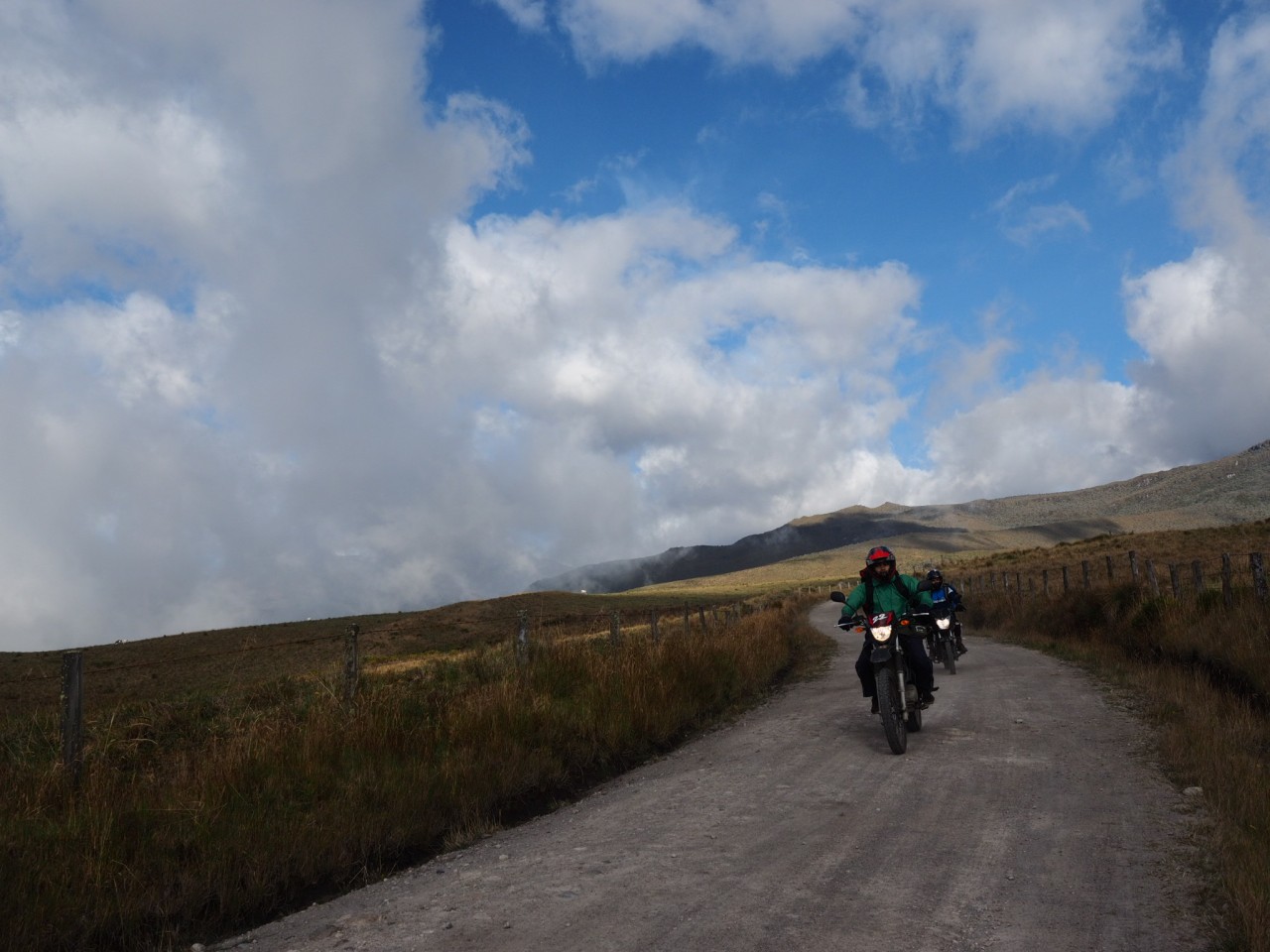 From here, it was all downhill, until it wasn’t. I coasted down the road, losing altitude rapidly. The elevation profile showed a long descent followed by a climb and another long down. What wasn’t obvious was all the shorter climbs along the way. I was pushing my bike up one of these – an impossibly steep hill that I just watched a truck barely make it up – when a pick-up truck pulled up and offered me a ride. It was 5 p.m. and I still had 12 kilometres to go, which in these mountains is a lot.  I loaded my bike into the box and climbed in next to it. Thank God he showed up because there was a lot more climbing left that expected. He let me out at the turn off to the hot springs and I cruised down the hill as it got dark.

Termales San Vincente turned out to be a busy resort packed with families.  Cars were parked along the road leading up to it and they were charging 85,000 pesos (about $38 CDN) to camp, including breakfast – about double what I expected. Without any other options, I grumbled and pulled out my credit card and payed up. I enjoyed a nice soak and cooked myself dinner before going to bed. They were really nice hot springs, but the camping area left a lot to be desired.

The next day was an uneventful ride along the highway to Salento. The highlight was pulling into Sanya Rosa De Cabal just on time for a parade that I think was celebrating the founding of the city. I stayed there a little longer than planned but still made it to Salento with time to spare. 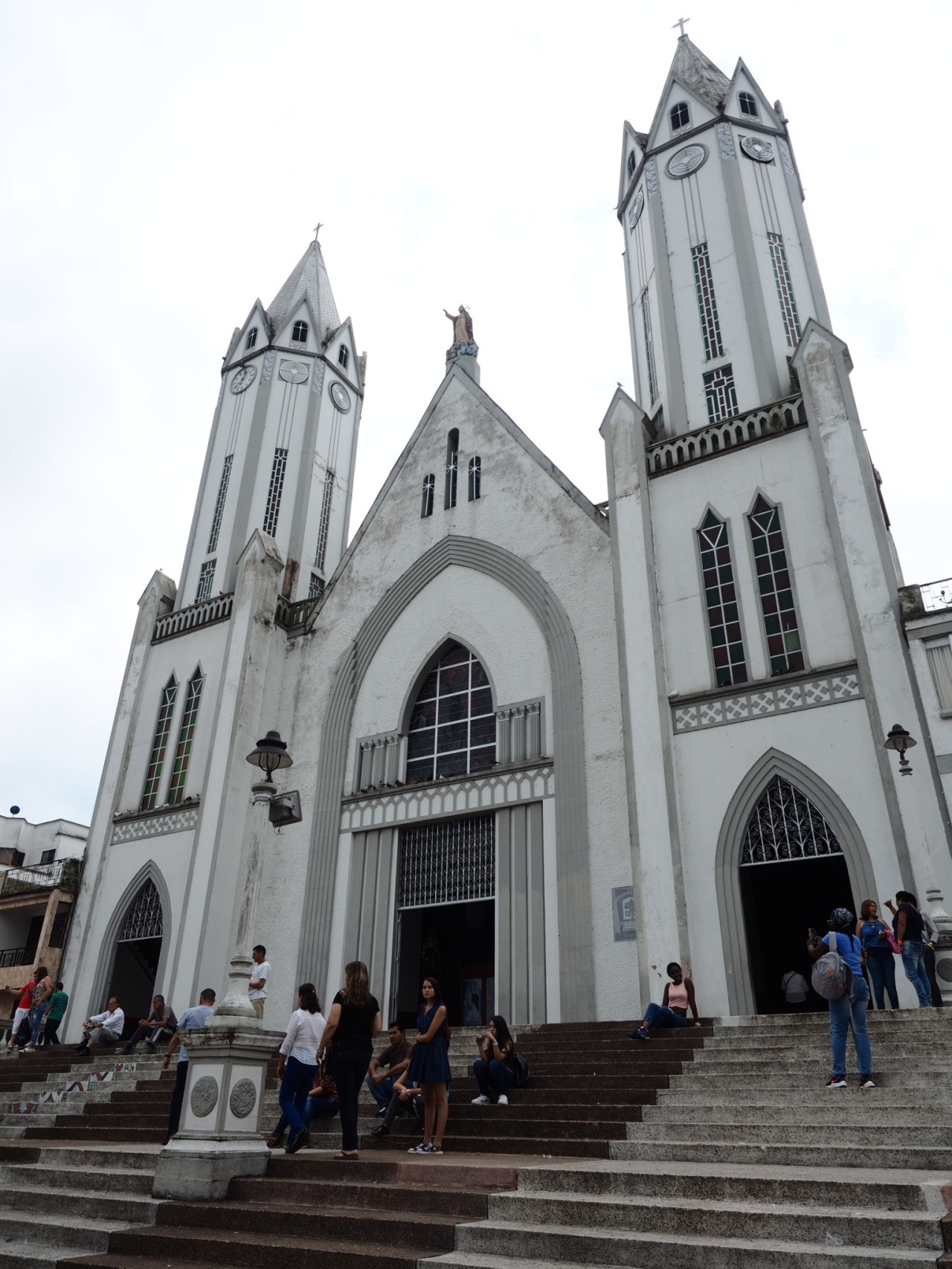 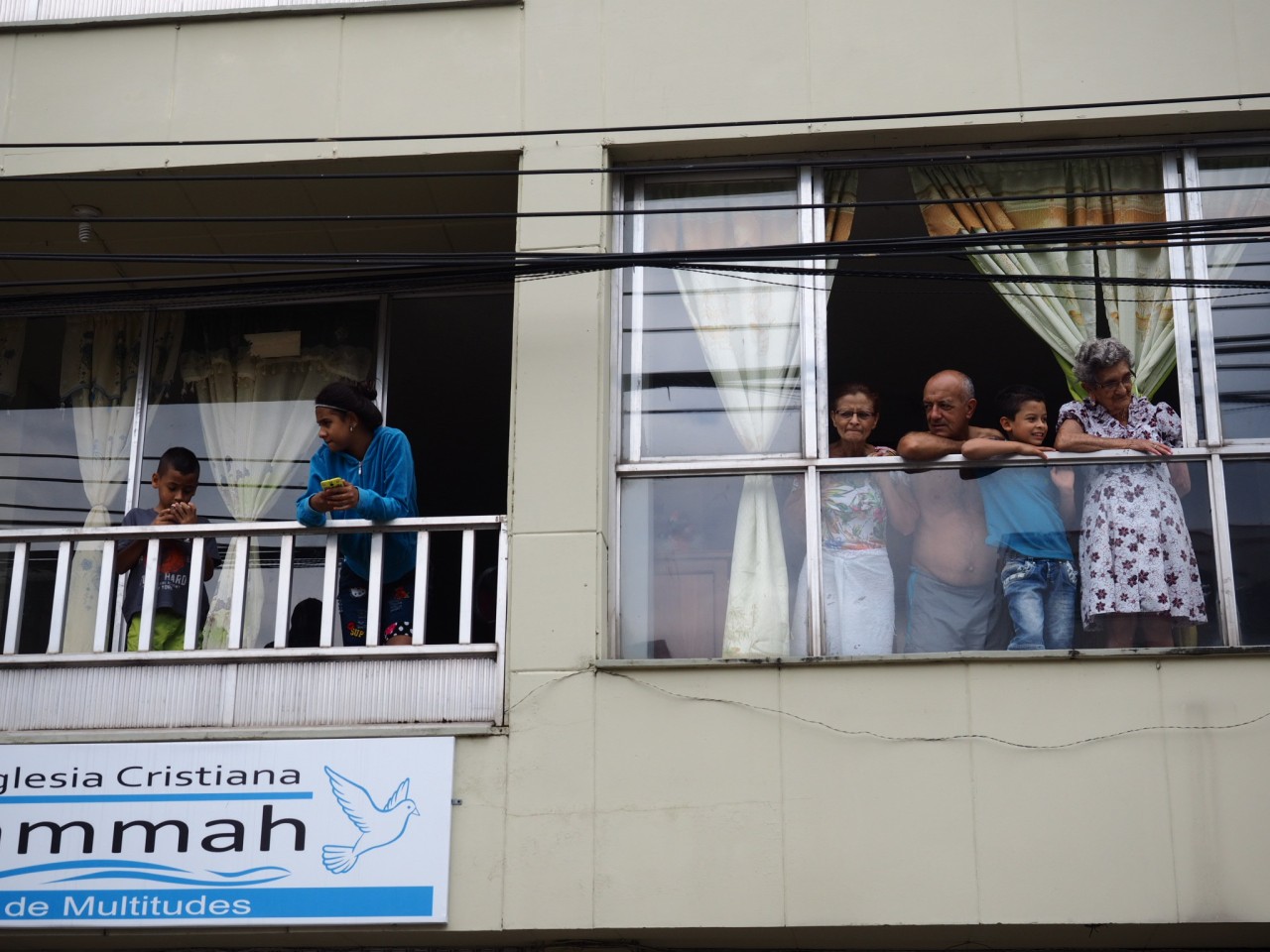 It’s been a lazy two days here, relaxing at La Serrana, a wonderful eco-hostel/organic farm a few minutes walk from the town centre. The extent of my activity has been wandering back and forth for lunch. I’m about to take a mountain road to Ibague and I’ve been told there’s some hot springs along the way with a restaurant where I can camp for free. Hopefully that information is true.

The GPS track for this route can be found here: https://ridewithgps.com/trips/20079404 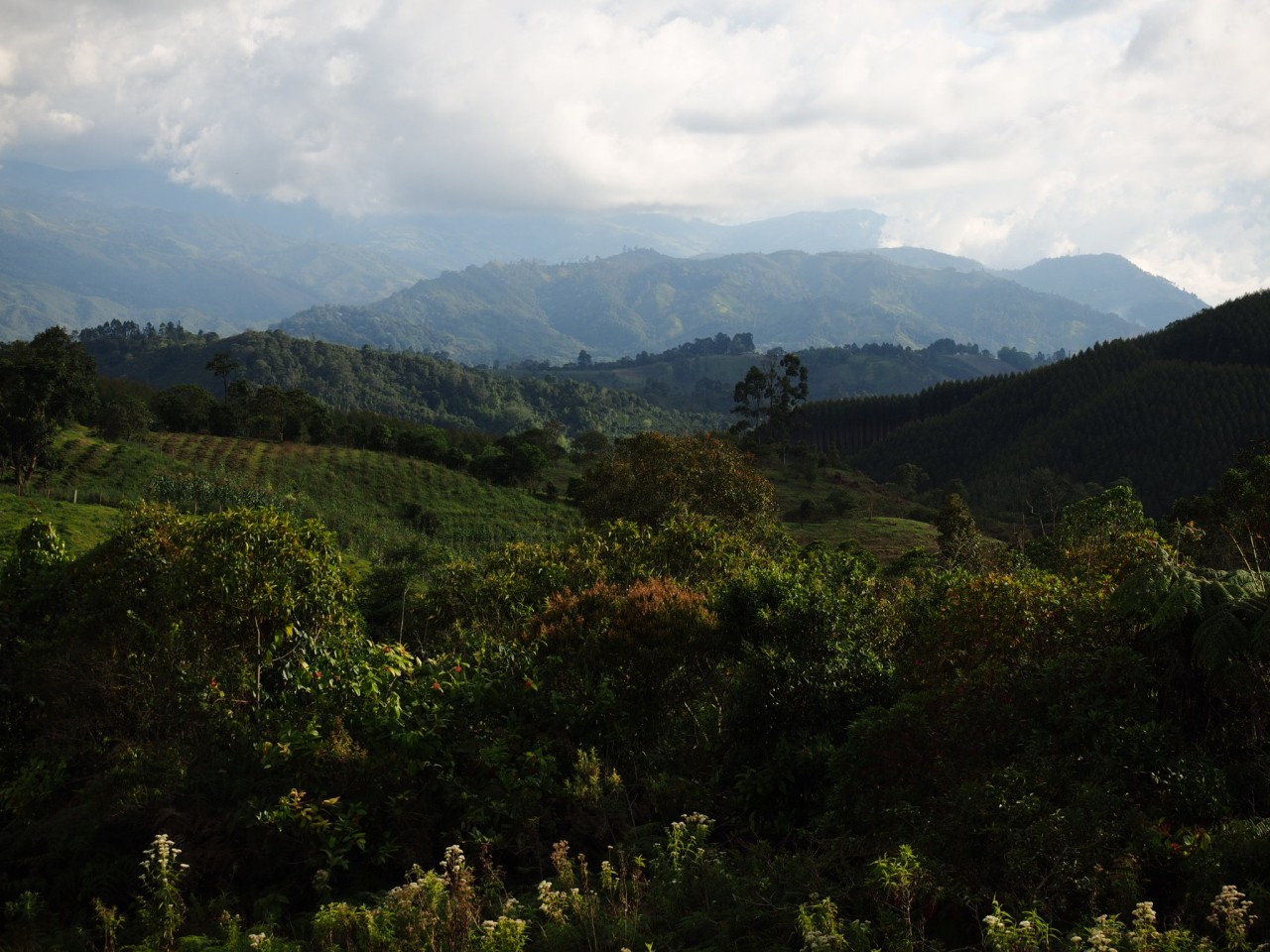 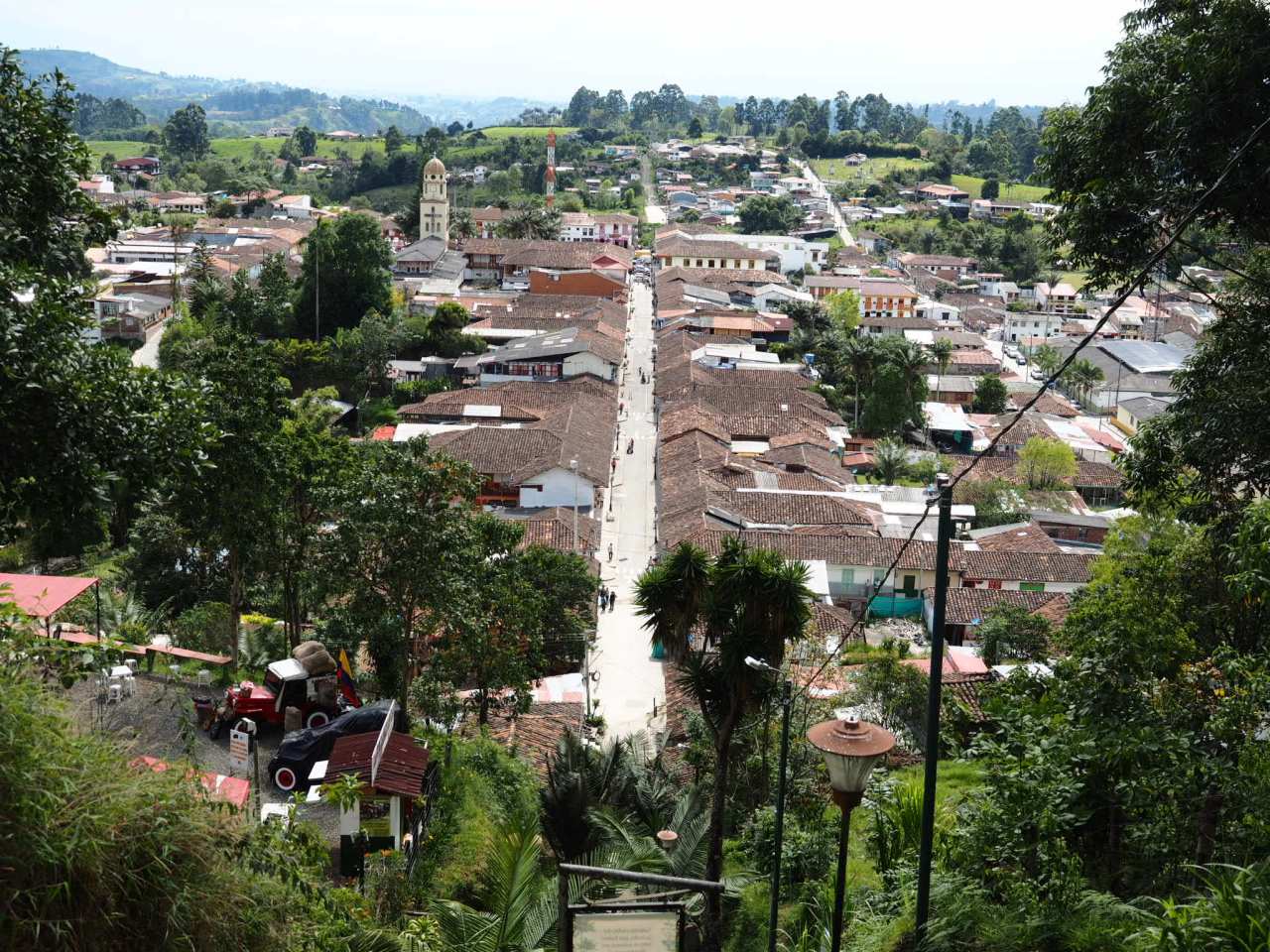 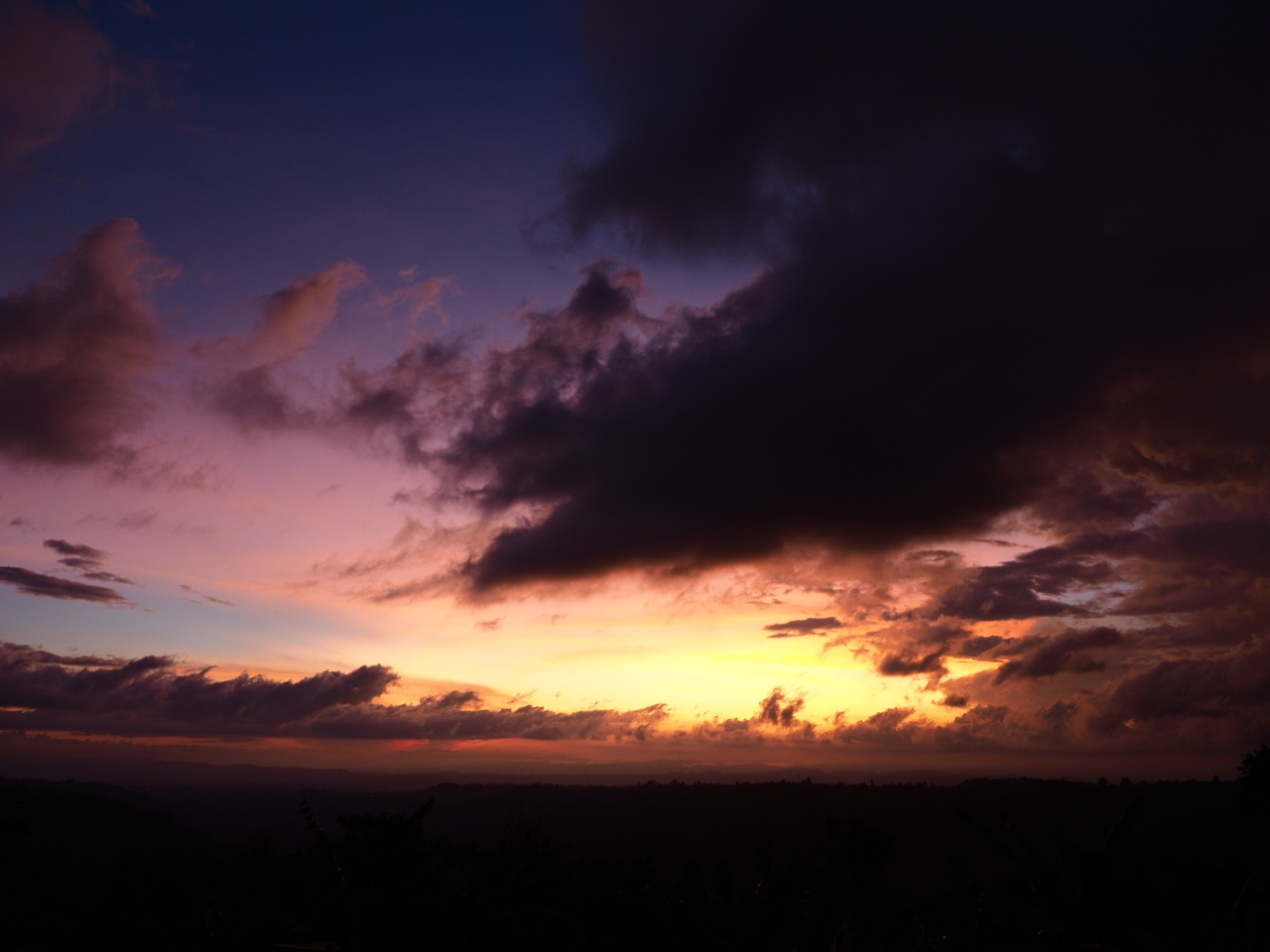