One thing I’ve found about living in Revelstoke, is it’s hard to create good bikepacking loops. The mountains here are steep and the valleys deep, so few roads pass through them. Most logging roads will go to the end of a drainage, where they runs up against an impenetrable wall or alders and devil’s club. If you’re willing to suffer, you can fight your way through the dense scrub and make your way up and over a pass to a road on the other side. As the first European explorers discovered when trying to find a route for a railway, this is brutal country. This would be hard enough on foot. With a bike, well, I’ve yet to hear of someone trying.

A little south, the mountains ease up a little, so I found myself staring at maps, trying to see if something was possible in the maze of logging roads between Nakusp and Slocan Lake. After carefully examining Google Earth, and contacting the local ATV club, I was able to map out a route that would take me around the craggy Valhalla Range. It would use a mix of highway, rail trail, logging road, mine roads, ATV tracks, and some alpine hike-a-bike to make its way around the range. I set out on Labour Day weekend, 2019, with one ominous storm in the forecast, but nothing that scared me off. Though maybe I should have been worried about climbing Hailstorm Ridge with a storm in the forecast. Not to mention almost 5,000 metres of climbing over 210 kilometres 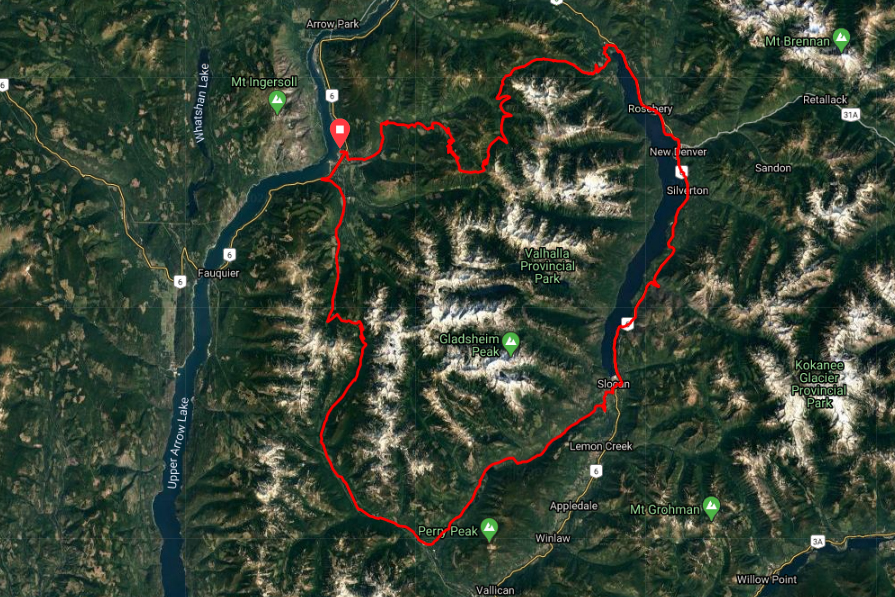 I left town Friday after work and camped at Roseberry Provincial Park, where I was able to park my car for the weekend. The ride began by following the Galena Trail along the shores of Slocan Lake. Pretty soon, I had reached the community of Hills at the end of the lake and the first long climb of the tour began – 17km and 1,250m of climbing. It wasn’t a particularly tough climb other than a few steep and loose sections, and it didn’t take overly long to reach the top between Mount Vingolf and Ruby Peak. This set me up for a rollicking descent down a degrading road and the climb to the evocatively-named Hailstorm Ridge.

The view from the top.

A homestead in Hills.

It was a pretty smooth climb for the mos part.

Remains of logging and fires.

Just the name Hailstorm Ridge was enough to make me want to go up. The fact a mining road crossed over the top didn’t hurt. The ATV maps of the area also showed a proposed trail that would pass along another ridge, linking Hailstorm to an abandoned mine on Tilicum Mountain. It would likely mean some hike-a-bike, but also incredible views. I’m all for views as long as they don’t kill me.

The road to Hailstorm Ridge was in reasonable shape given the only use it sees is probably from ATVers and dirt bikers. The final few kilometres were too steep and loose to ride, but soon enough, I was on the ridge. Much to my chagrin, there was a jeep parked up there. To my even bigger disappointed, the owners were having a little party where I was going. So much for being alone in the wilderness.

From Hailstorm Ridge, I had two options. I could either go straight down the other side on an existing road, or I could do the hike-a-bike I planned. The former option would have been far easier and more sensible given the storm in the forecast, but after getting a glimpse of the views from the hike-a-bike option, I had to choose option two – lightning be damned.

One of many abandoned structures in the area.

An abandoned mine shaft.

“Bad roads” was the theme of this tour.

I pushed my up what’s called Londonderry Trail on the map, but which was little more than an animal track in real life. Gaining the top, the partiers ignored me and I happily ignored them and went on my way. It was a gloomy evening, with clouds shrouding the Stegosaurus-like peaks of the Valhalla Range to the east, and the more rounded Monashees far to the west. I found a nice meadow to set up camp and settled in for the night. The storm passed to the north and I could enjoy the show from the comfort of my tent.

The next morning I continued the push along the ridge under partly cloudy skies. My new set up of strapping a backpack to my rack instead of using panniers paid dividends. After a few easy scrambles, I came across an ancient mining track, and while I couldn’t really ride most of it, it did give me a track to follow. Eventually I found myself crawling down a steep road made out of jagged rocks to the Tillicum Mine. 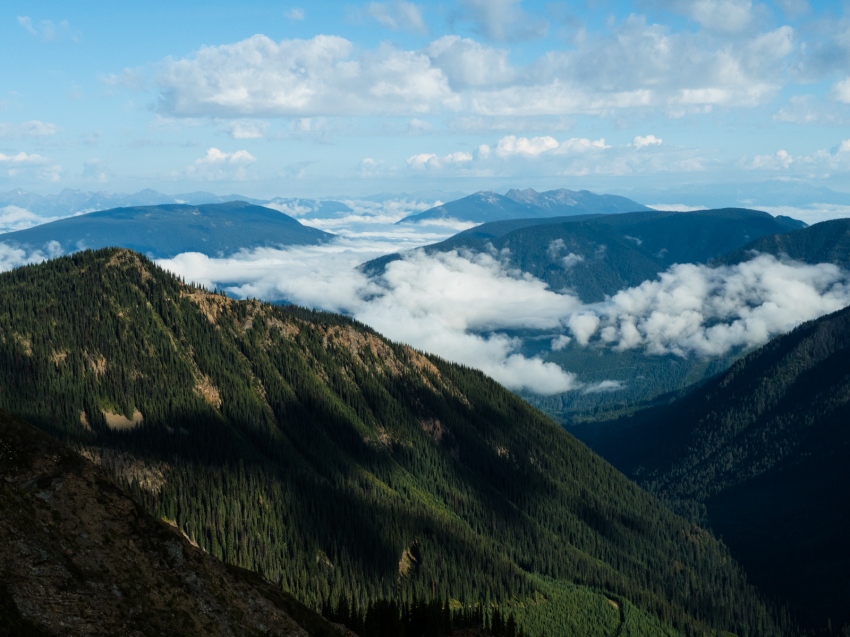 Early morning views towards the Monashees.

Another bad road, but at least it’s a road.

Moody skies on the ridge.

I’m torn about these abandoned mines. On one side, they do need roads to get to and they are interesting to explore. On the other, they are a blight on the landscape and surely pollute the surrounding landscape. Most old mines haven’t been remediated, the cleanup will cost a fortune, and the taxpayers will likely foot the bill, if it ever gets done. Tillicum mine is relatively small by most standards, but it’s still made an impact. Roads have been carved up and down the mountain, mine shafts sit open, and old buildings and machinery have been left to crumble. It’s passed through multiple hands since it was last operational, and who knows if it will start up again, or simply remain abandoned to the mountains.

Reaching the mine meant the end of the first stage of this trip. From here, it was downhill on a smooth logging road to the community of Burton on the shores of Arrow Lake. The community campground offers some of the best views in B.C. and I highly recommend it. I just stopped for lunch as I was hoping to tackled another pass in the afternoon.

The Tillicum Mine is a mess..

Views from the Burton campground.

My target for the afternoon was an ATV track through an unnamed pass below Mount Lequereux. It started off fairly typical, following a logging road that slowly deteriorated the farther it got from the highway. Eventually, the road crossed the creek, but my route went straight. It had been decades since the road ahead was last used. The bush was taking it over slowly but surely, but there was still a passable track through the middle of the encroaching alder. The ground was solid and the grade gentle and for a while it wasn’t too bad. Occasional ATV tracks gave me hope that I was going the right way.

Of course, it got worse. After a few kilometres, I could no longer pedal through the whipping alder and had to get off and push, barely able to follow the remnants of the road amongst the thick brush. I reached the end of the valley where the road started climbing steeply up its eastern flank. This is when I started to get serious doubts about this route. The road was so eroded, rocky and full of sturdy trees, I seriously wondered if it had been travelled recently. I’m not an ATVer at all, but I couldn’t imagine getting a bulky machine up here. But I was still on track so I kept going. 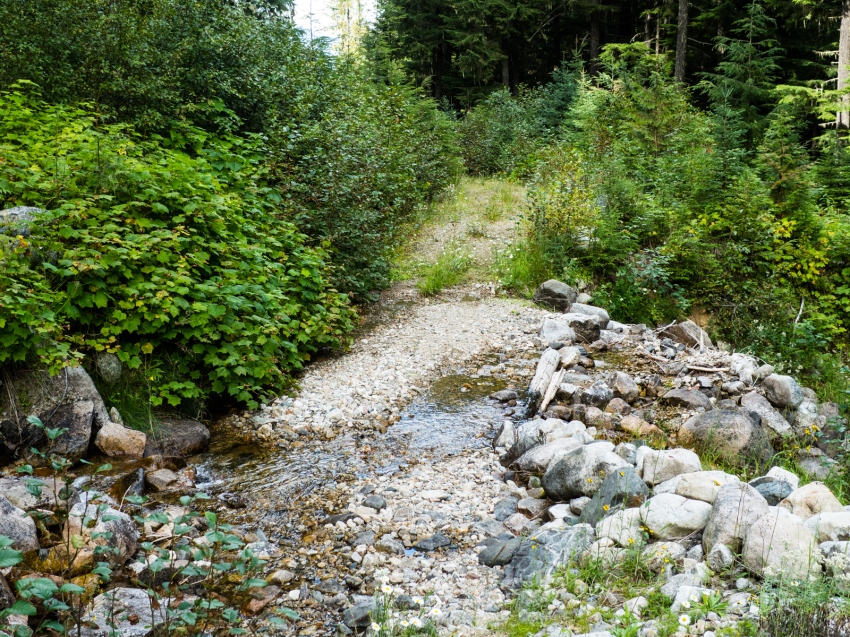 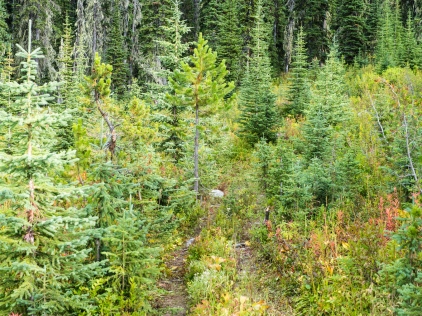 Eventually I reached an adolescent clearcut and soon the forest beyond. For the first time in a while the trail was clearly defined and it didn’t take me long to summit the pass. On the other side was a perfectly graded logging road and I zoomed down some 30 kilometres until I found a nice campsite on Koch Creek. I was able to gather enough wood to get a fire going and enjoyed a peaceful night camped out by the creek.

The final day was pretty uneventful. I had 80 kilometres to go – half on logging roads and the other half on Highway 6 along the shores of Slocan Lake. The logging road portion was pleasant and seemed to pass by quickly. The highway was a slog (with amazing views across Slocan Lake to the Valhallas) but eventually I was able to turn onto the Galena Trail and follow it to Roseberry, where my car awaited. 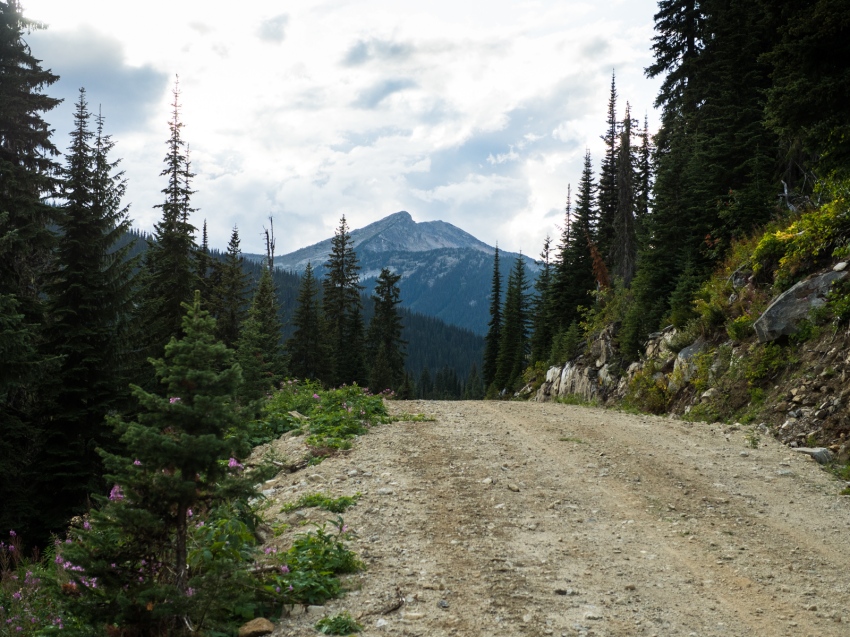 The top of the final pass. 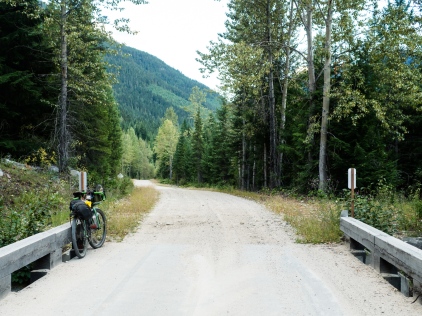 Would I recommend this route? If you don’t mind a little hike-a-bike and a little bushwacking, it’s not bad. There’s definitely some amazing views and it is an adventure. I wouldn’t travel to ride it, but if you live in the area and don’t mind a bit of suffering, it’s worthwhile. It is one of the few bikepacking loops in the West Kootenays.

Here’s a link to the route. 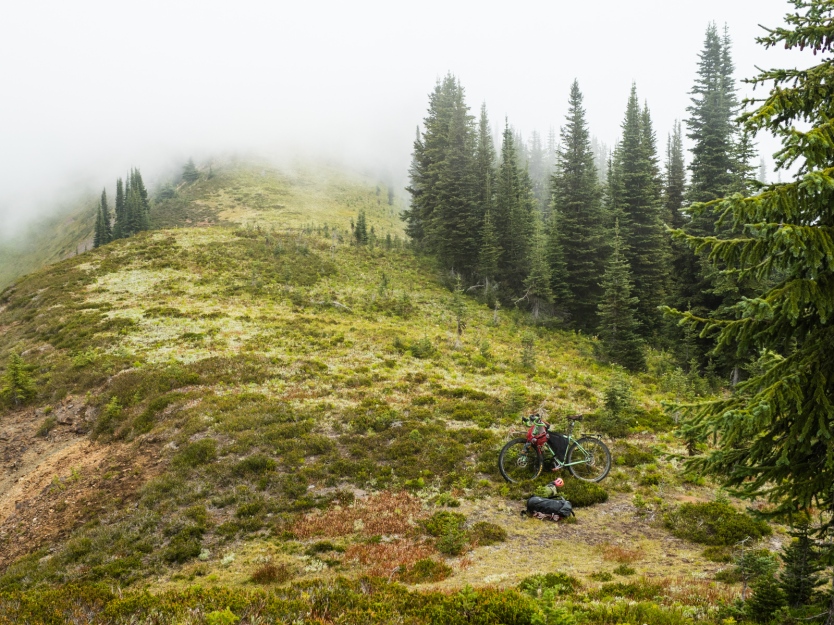 Moody skies on the ridge. 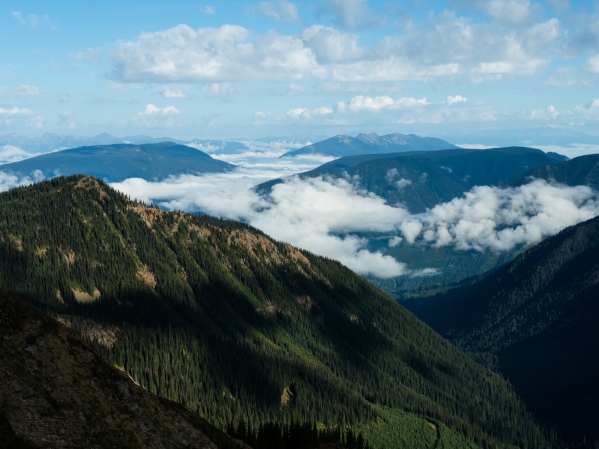 Early morning views towards the Monashees.