The stunning beauty of Thor Lake

If there’s one place around Revelstoke I want to return, it’s the Thor Lake valley. It’s a land of where milky white clouds blend with greying glaciers, that break apart over the rocky peaks. From there, water trickles, first in gentle streams, then into thundering waterfalls, tumbling from lakes into ponds, it’s path shaped by meadows filled with a rainbow-array of wildflowers and soft heather.

Fifty kilometres of highway, 20 kilometres of logging roads and a few kilometres along a rough trail in a jungle-like temperate rainforest brings you into one of the most stunning valleys around Revelstoke. The scenery is exceptional even for one of the most spectacular corners of the world. Wandering through this valley, on a trail that barely exists, it feels as wild as ever.

My first trip to Thor Lake was two years ago with my friend Meghan. We left early and were in a rush since she had to drive to Calgary that afternoon. Using directions from the invaluable RevelstokeTrails.com, we made our way to the trail head with the intention of running the trail.

Camping at the small, three-car parking lot, was Craig Lewis, the unofficial custodian of the trail. We started our run but quickly discovered the path was too rough and too covered in brush to move quickly. You couldn’t see your steps under the tall grass and we slowed to a fast hike as we moved through old cut blocks checkered with the remains of giant cedars, and into the lush forest. Here, the trail crossed Thor Creek on a smooth, slick log. A rope was set up to assist the crossing, but it was easier to straddle the log than to walk.

From there, the trail got steeper as it ascended through some of the densest, lushest, greenest forest I’ve seen outside the tropics. We climbed up and over logs and followed the flagging tape when the trail faded. It skirted the creek where it roared downwards, eventually emerging at a log jam at the end of Thor Lake. We scrambled through boulder fields and bashed our way through alder as we skirted the edge of the lake. The trail continued past the lake, through marshy wetlands where my running shoes filled with water. The thundering honk of a moose startled us and later we saw it running away across a giant bog. 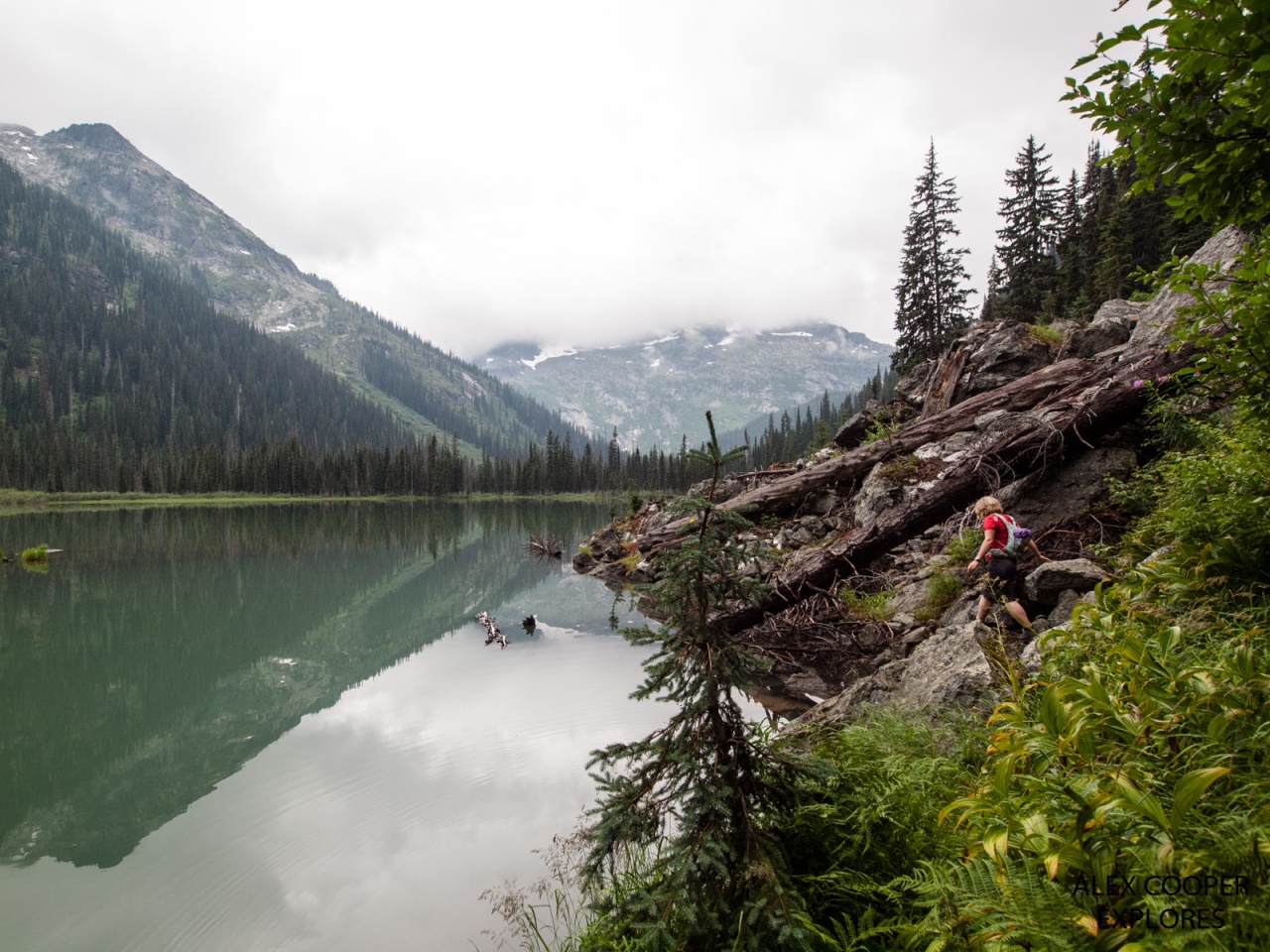 By now, the trail was little more than a flagged route through marsh and trees. We reached a junction where one sign other pointed to the Rock Garden and another pointed upwards to Three Island Lake. We knew nothing of the latter and given our time frame, we kept going straight into the vaguely known. Still, I kept Three Island Lake in mind for the future.

By  now we were in full-on bushwhack mode, limboing under the alder and parkouring over deadfall. Finally, the forest ended and we found ourselves in an open valley that turned south before dead-ending below the glacier hanging off Kelly Peak. Meghan hopped up a small knoll covered in beautiful purple arctic lupine flowers and I followed.

The other side was one of the most idyllic mountain scenes I’ve witnessed. Twin waterfalls cascaded out of the clouds and down the mountains into a small pool and then flowed out through the appropriately named Rock Garden, turning into Thor Creek. If there was a sequel to The Beach set in the mountains, it would be set here. Of course, there’s only one thing to do in a situation like this. We dove into the chilly water before retracing our path back to the car.

A few weeks later I texted my friend, the talented photographer Steve Shannon, to see if he wanted to check out Three Island Lake with me. There was no information about this place online but I had spotted the lake on Google Earth and had a rough idea of where it was. Google’s satellite image showed the lake frozen over and the alpine still covered in snow, so we didn’t really know what we were getting into.

After some cajoling, I convinced him to come. We set off early and made quick work of the trail to the junction. This time, I wore proper hiking boots and my feet stayed dry. It was also a beautiful sunny September day and the glaciated peaks were in full view.

The trail to Three Island Lake involved a long, steep climb through alder. It didn’t help that we missed some flagging, and so had to bash out our own route instead of following the one already hacked in upwards. We found some flagging tape on the way up, so we were able to mark our way back, just in case.

If the Rock Garden was idyllic, Three Island Lake was absolutely stunning. We emerged out of the alder slopes into sub-alpine meadows filled with giant boulders that had tumbled from the rocky highs many years ago. A waterfall slid down a smooth, rocky outcropping, presumably into the pool I had enjoyed a few weeks earlier.

Some scrambling up a boulder field and a bit of easy route-finding led us to our destination – an sublime alpine lake with three rocky outcroppings that give it it’s name. 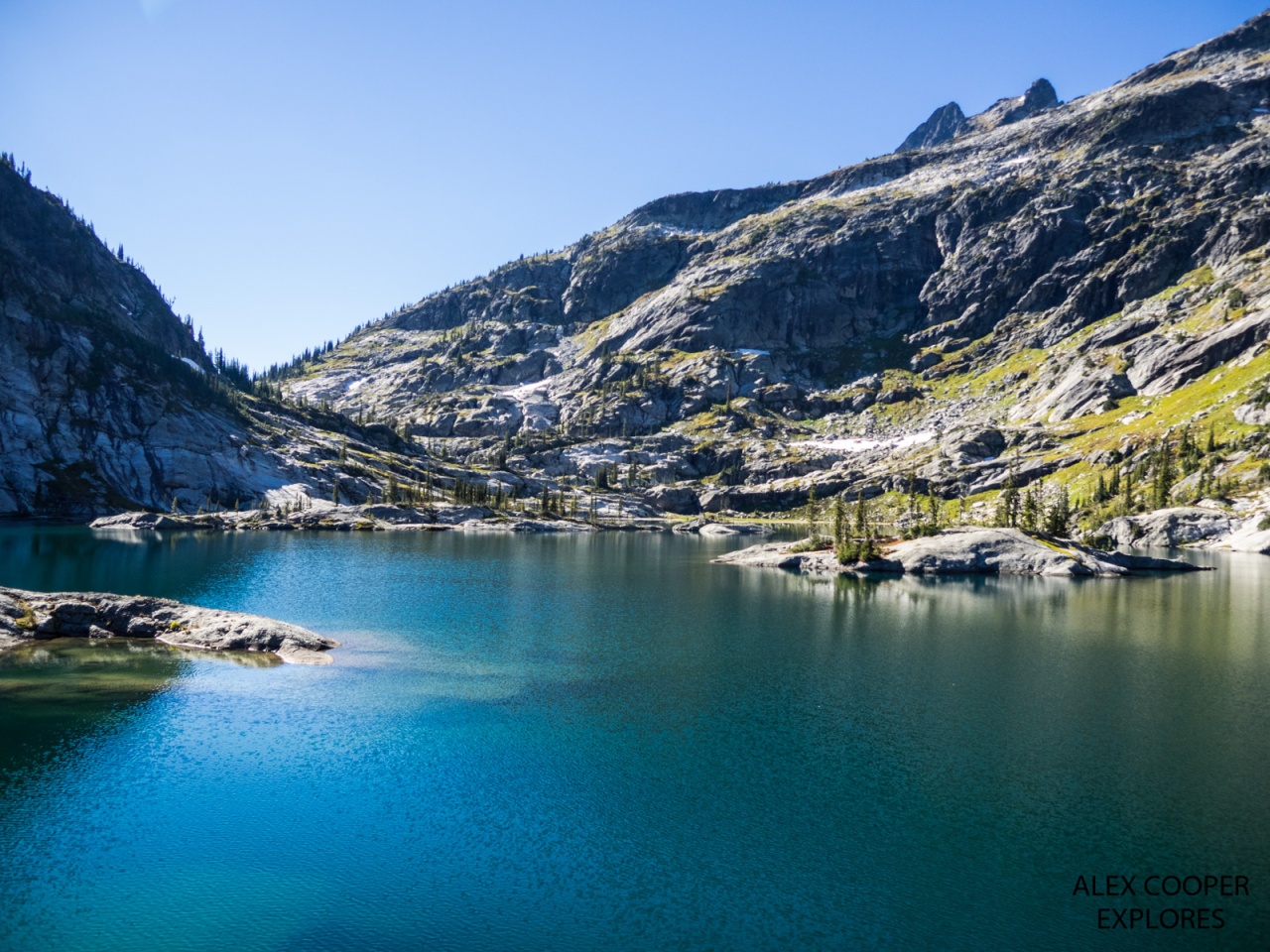 But the real joy of the area was the endless streams and waterfalls that flowed out of the lake and through the surrounding meadows forming an Escher-esque backdrop. Every time you turned a corner or topped a hill another incredible landscape emerged – all backed by Mount Thor.

I made one more trip back to Thor Lake in 2015 with my friend Robyn. Unfortunately, Mother Nature was having a moody day and we decided not to hike to Three Island Lake lest we get caught in her tears. Instead, we returned to the Rock Garden and walked right to the end, where it ran up against the face of Kelly Peak. We scampered from rock to rock, staying out of the riverine valley The clouds rolled over top of us and it even snowed a bit, but in the end the heavy rains held off and the sun was out in full force by the time we returned to the car. 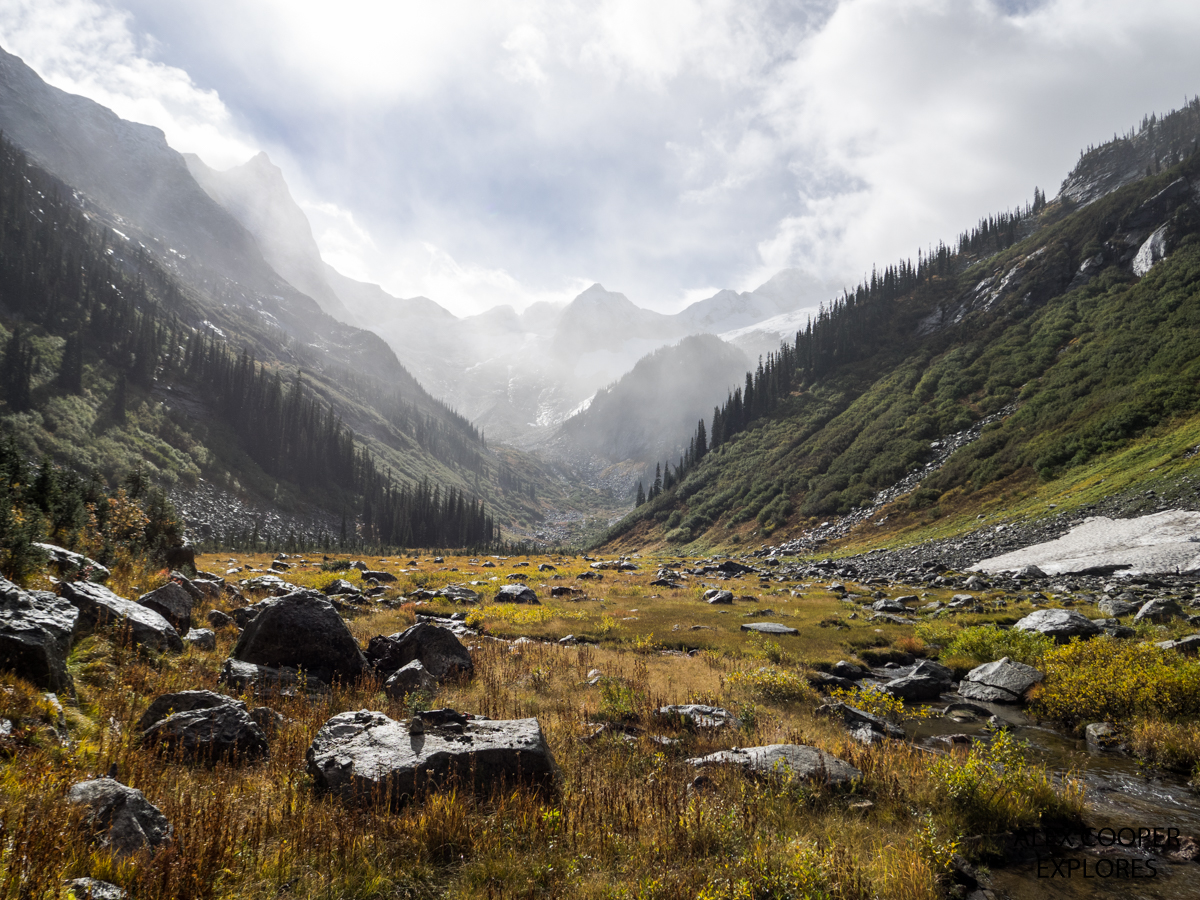 I still want to go back to Three Island Lake, this time for a few days with the goal of exploring the area further and possibly summiting a peak or two. One day…