It’s been a while since I’d spent much time in a city. Since leaving Manizales sometime in mid October, I’d passed through many small towns but my city experiences were limited to a day in Ibague, lunch in Ipiales, and a night in Tulcan. I’ve actually enjoyed my time in South American cities – even the ugly, mid-sized, non-touristy ones like Ibague. I think they give you a better view of how most people live than more popular locales like Medellin, though they may not be quite as nice.

So it was I found myself rolling through Ibarra and Otavalo on my way to Quito in Ecuador.

Ecuador greeted me with rain and hail, followed by a spectacular sunrise in El Angel Ecological Reserve my second morning in the country. That sunrise set the stage for the next week.

I left El Angel and rolled down a cobblestone road into the reserve’s namesake town, where I located the local bakery and devoured a couple of pastries in the town square with the local drunks who were off to a early start. I admired the hedge carvings and stocked up on snacks before heading off again. From there it was a short climb to San Isidro and then a beautiful, paved 2,000 metre descent to the Pan-American Highway. 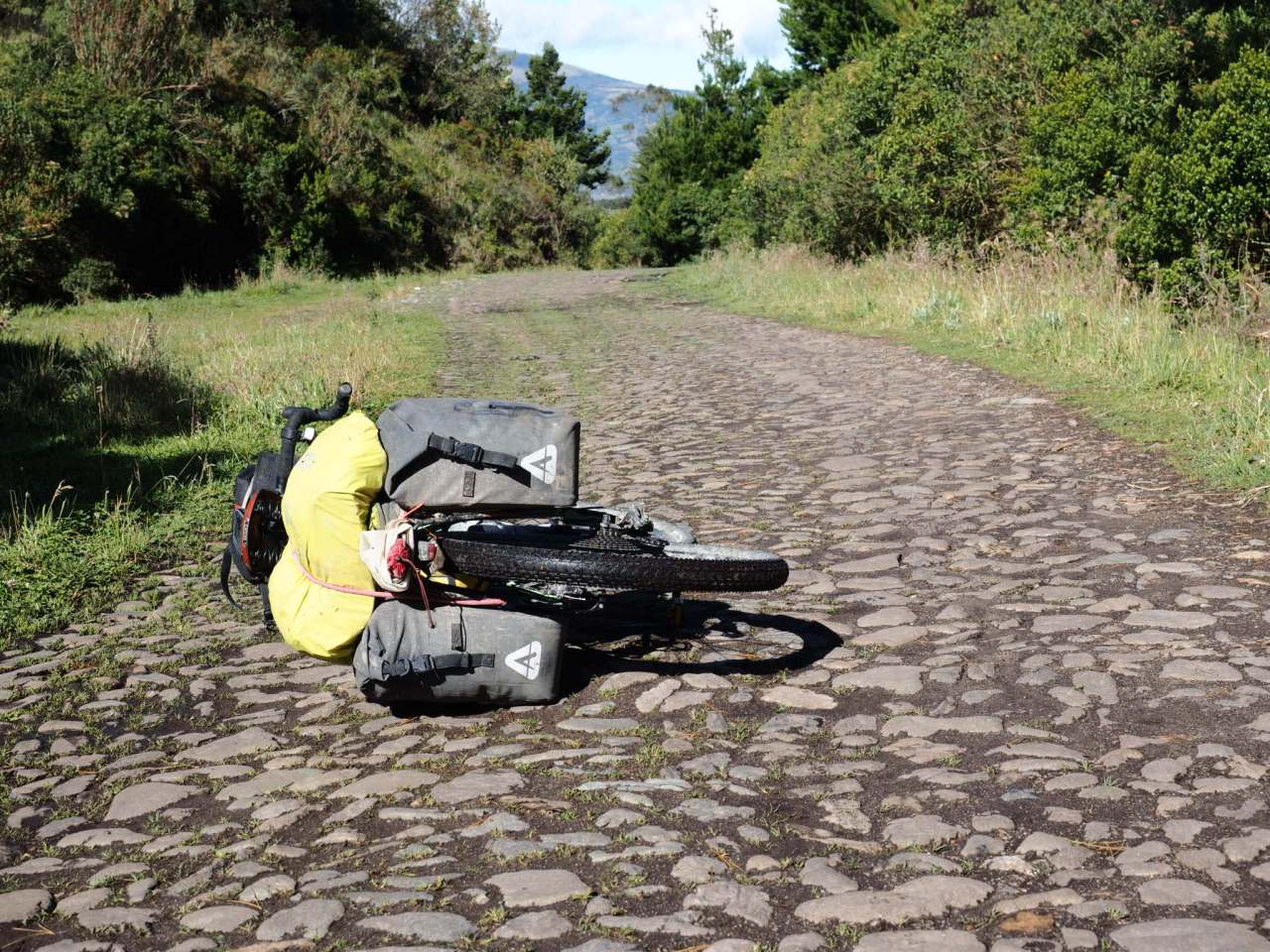 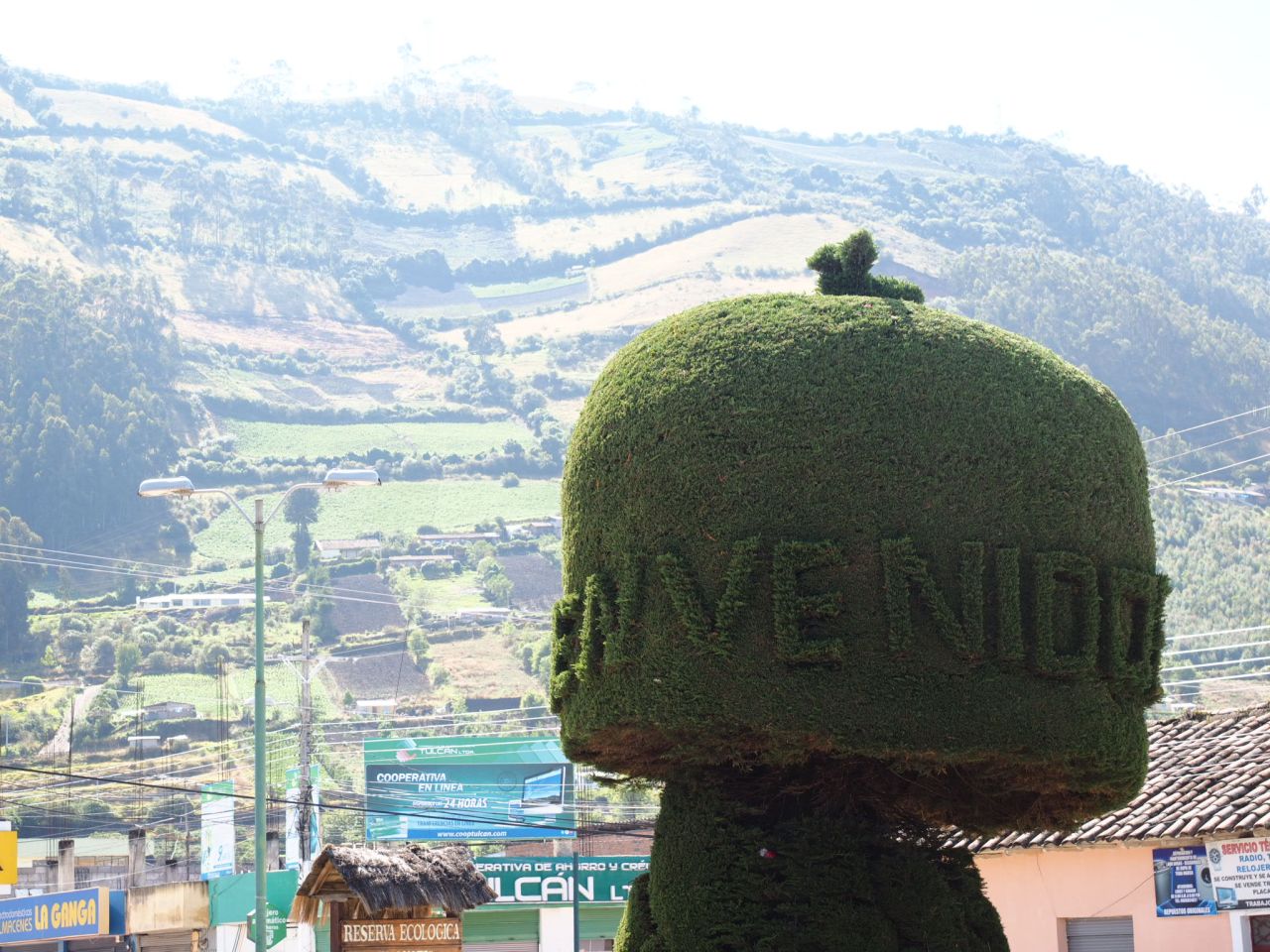 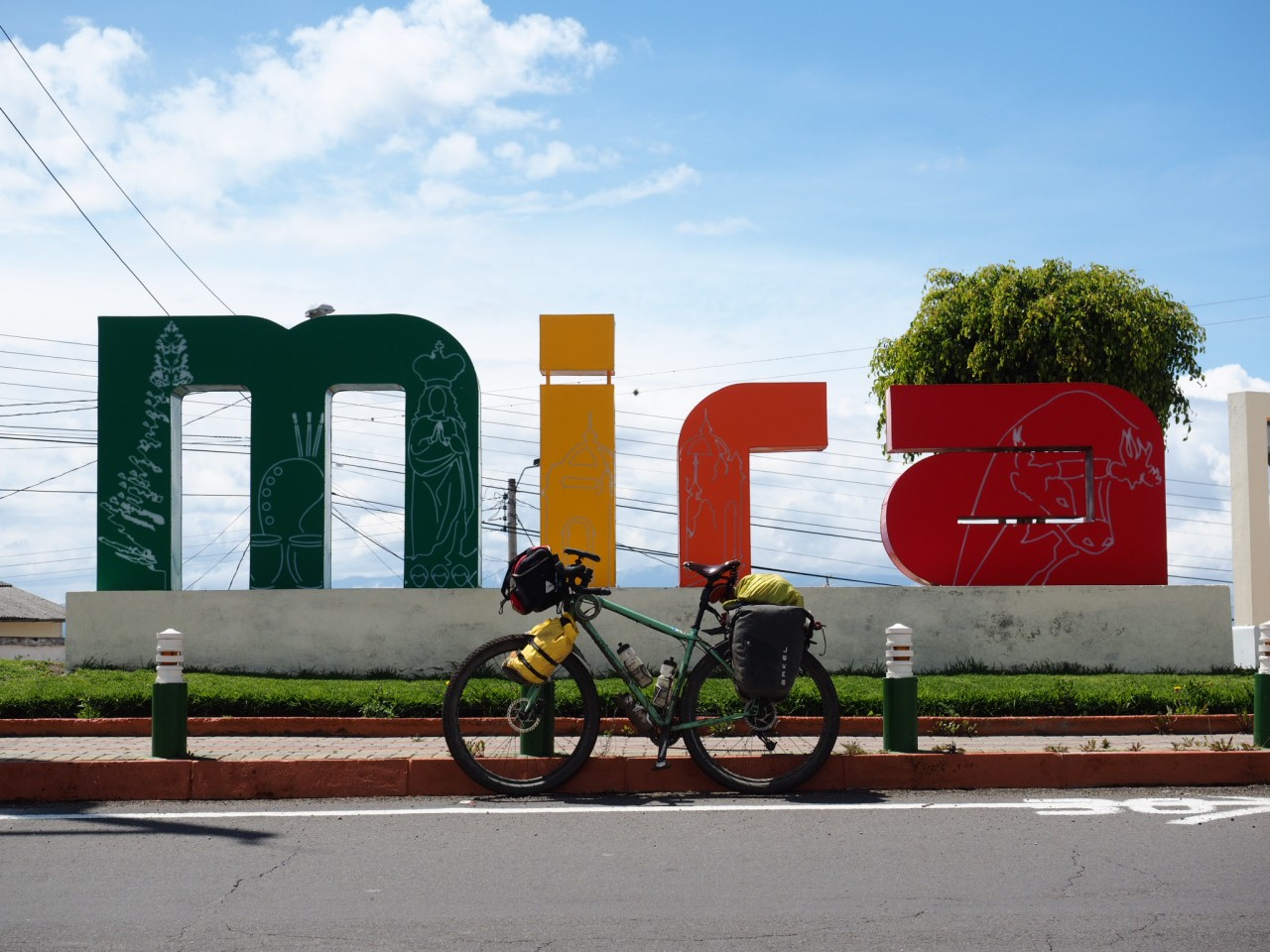 Hitting the highway meant entering an entirely new landscape. I left the wet highlands for the dry, dusty, cactus-filled inter-Andean valley. I also had to contend with a fierce headwind that nearly had me in granny gear to keep going forward. Hungry, and not seeing any roadside restaurants, I turned off the highway into the desolate town of Salinas, where I had lunch at the only restaurant, and then followed a sandy side road to Ibarra. Volcan Imbabura loomed ahead of me the whole way, but my one brief stop to take a photo led to a fierce sandfly attack so instead of taking a picture of the 4,700 metre high volcano, I kept going. 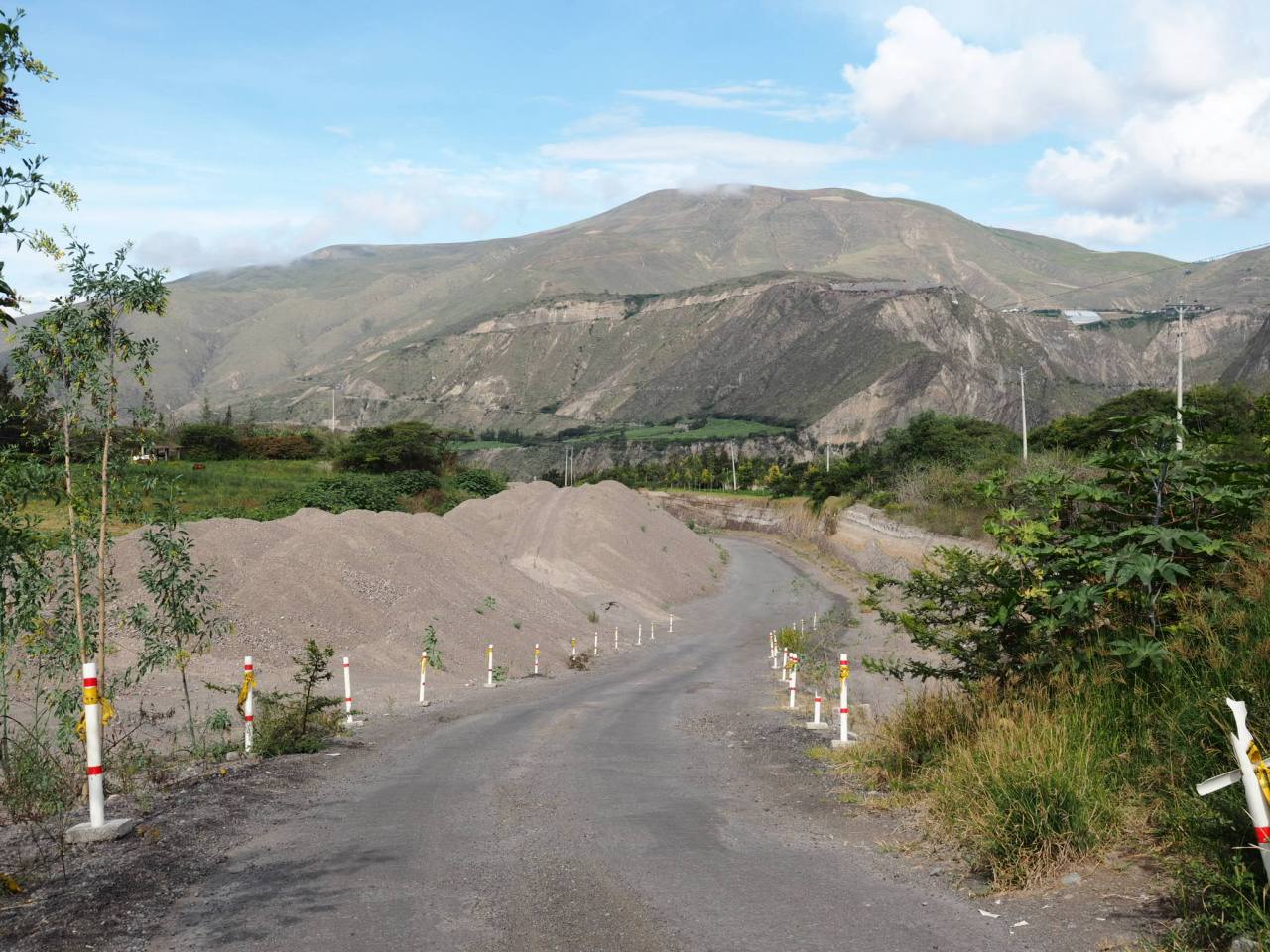 I reached Ibarra around 4:30 and settled in at the pricey but very nice Real Dream guesthouse. I went to the chaotic central market to buy veggies to for dinner and got there just as it was closing. One thing I’ve always loved about travelling In Latin America is the vibrant markets, and Ibarra’s was no exception. It spread from the central building into the surrounding streets and was full of life. Have I mentioned produce here is incredibly cheap? An onion, pepper, zucchini, carrot, two oranges and a bucket of blackberries cost $1.50. Its going to be tough grocery shopping back home after this trip. 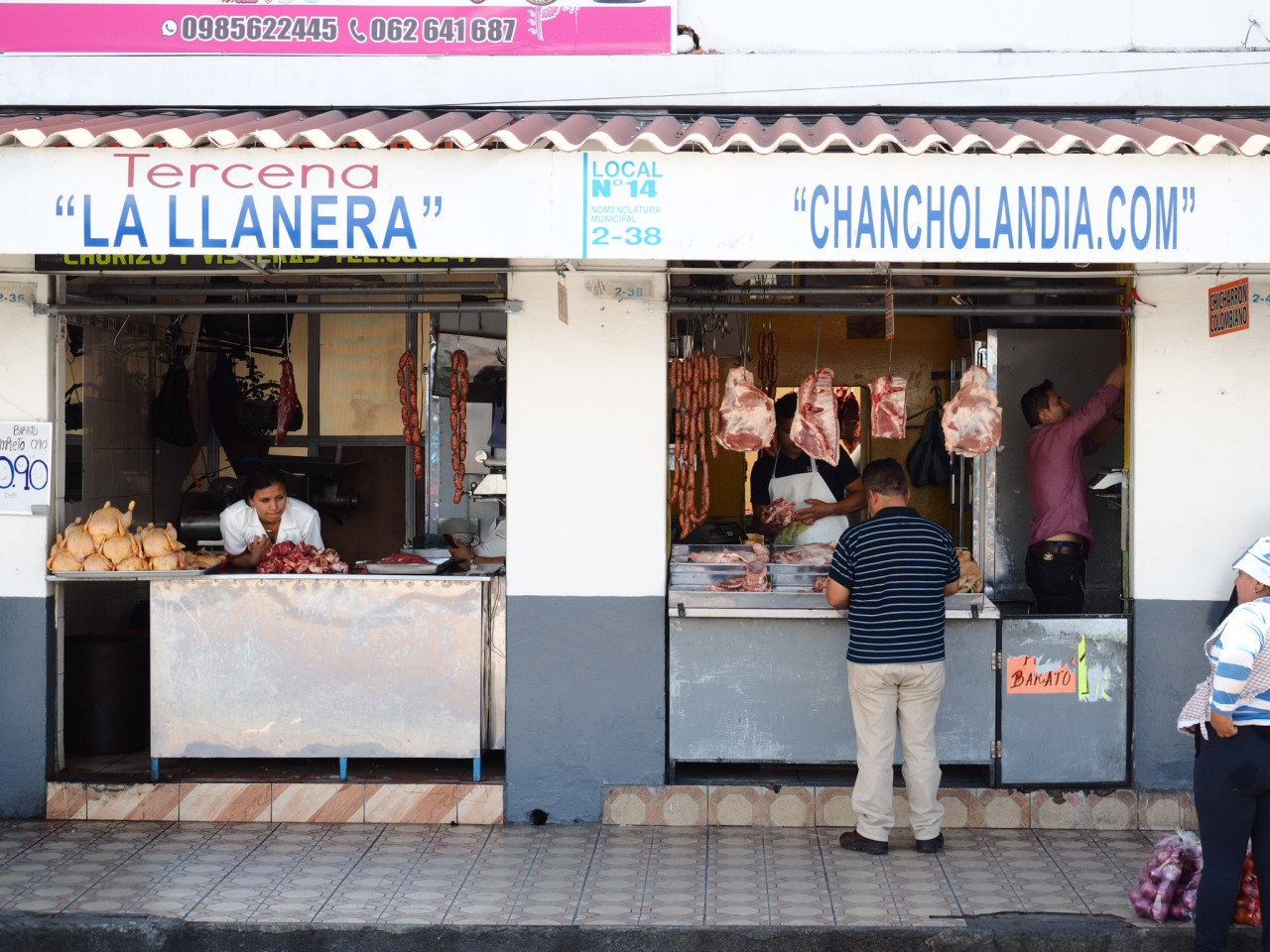 The next morning I wandered into Ibarra’s historic centre. The tourist blurbs brag about the beautiful whitewashed buildings, but to me whitewashed equates boring. It was incredibly quiet in town, with the city was all but shut down for Day of the Deceased – the Ecuadorian version of Day of the Dead. 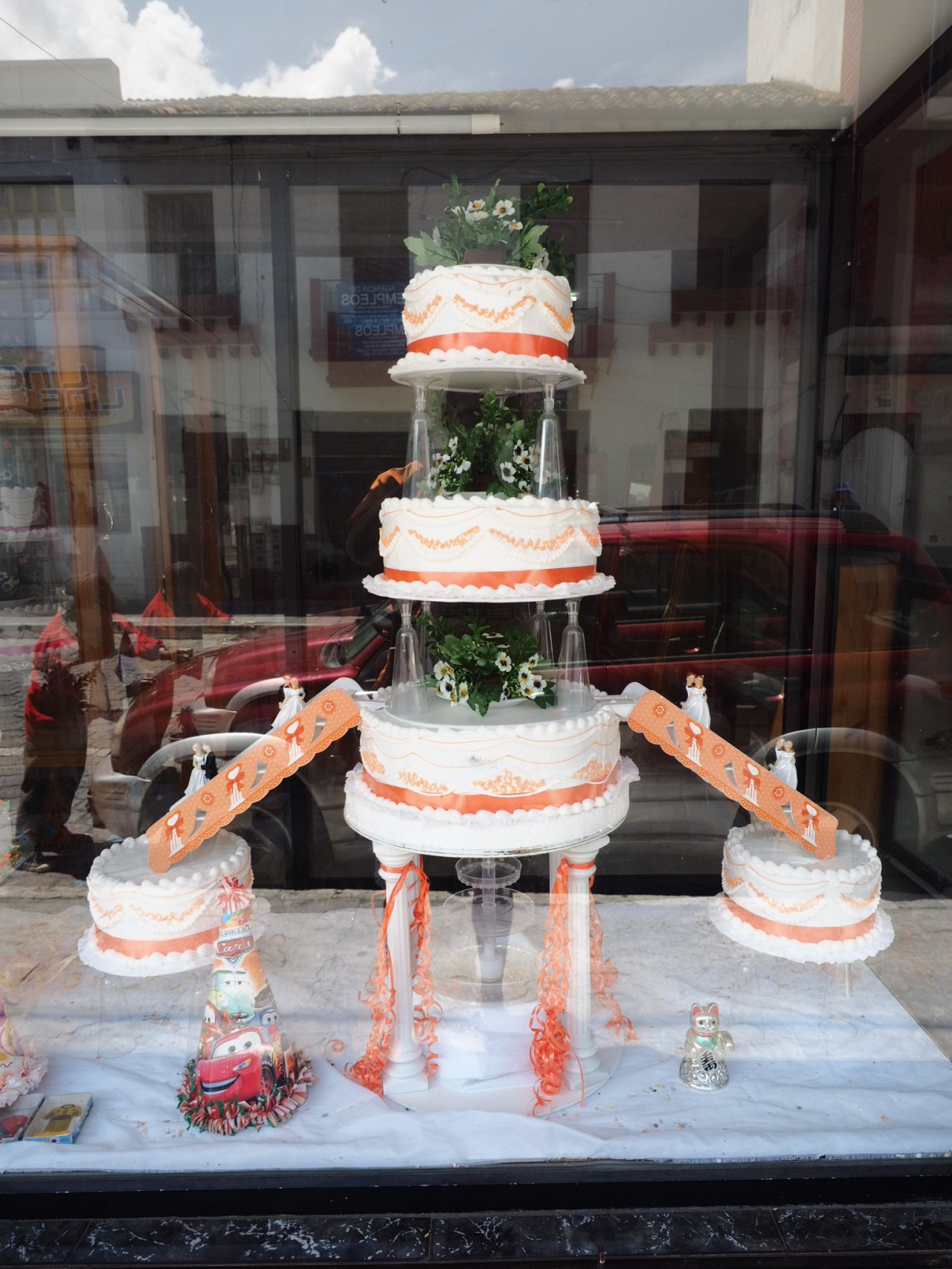 I’m sure most people are familiar with the Mexican version of Day of the Dead, when people dress up in macabre costumes and parade down the street to honor the dead. In Ecuador, people mark the occasion by going to the local cemetery during the day and placing cards and flowers at their loved one’s graves.

I was staying a few blocks away from the cemetery so I walked down past the food and flower vendors and wandered in. The most interesting part was simply seeing the cemetery. Instead of a big field covered in tombstones, in Ecuador the graves are stacked row upon row, one on top of another. The graves had little pockets for flowers and most were already filled or being adorned. 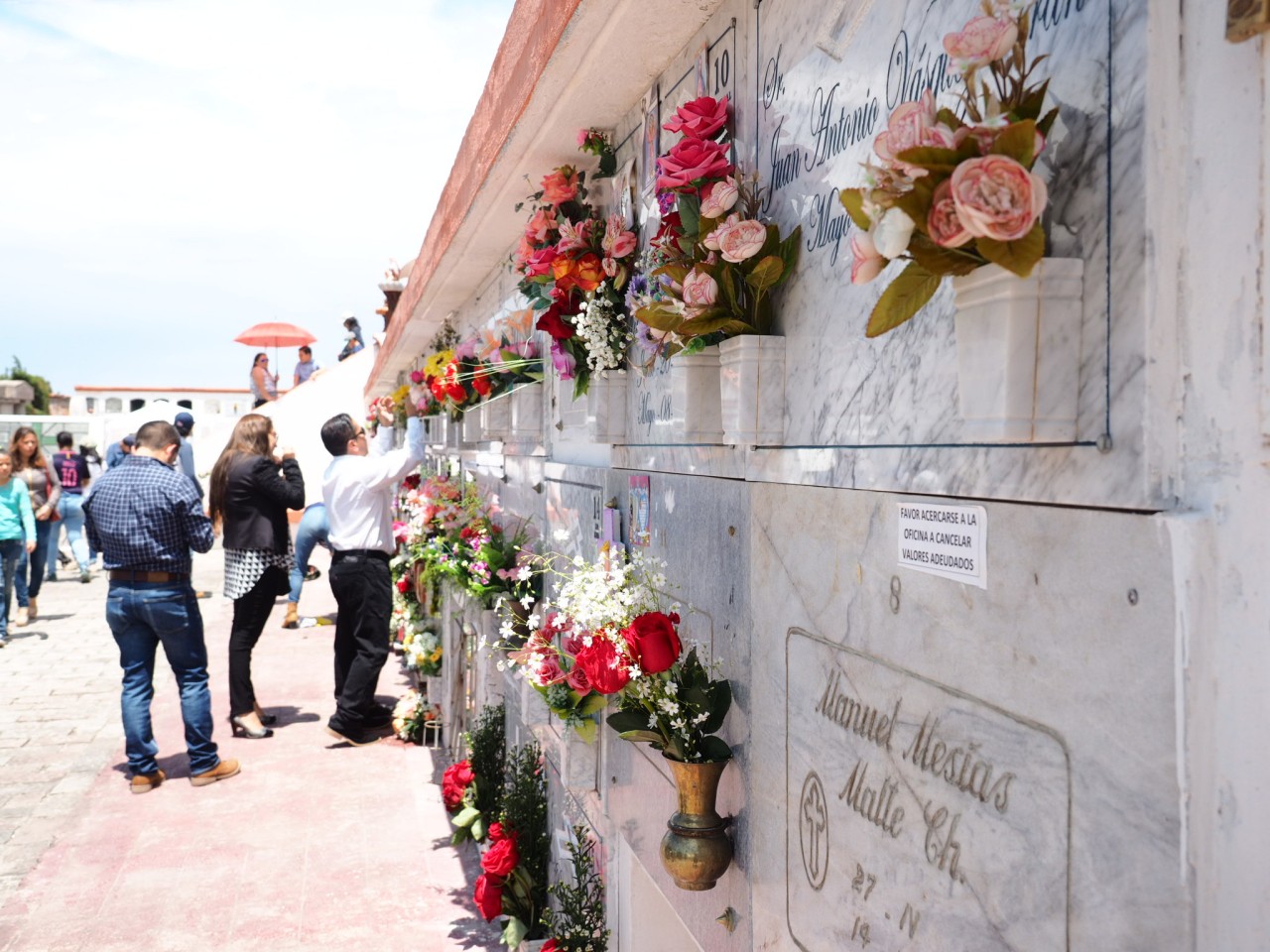 That afternoon I made the 30 kilometre ride to the famed market town of Otavalo. I took a rest day on Friday ahead of the Saturday market, which may be the biggest in South America. I did make it to the food market, which is in a rather dull and orderly building lacking all of the atmosphere you’d hope to experience at a Latin American market, but with all the food you could desire.

My first stop Saturday was the animal market, which should alarm any animal rights activist – and disturb anyone else. I was too late for the cattle and pig auctions but did witness people walking about swinging chickens by their legs as if they were dolls. There was cages packed with chicks, guinea pigs, and rabbits, and even a few puppies for sale. It wasn’t pleasant, but it provided a bit of insight into local life. 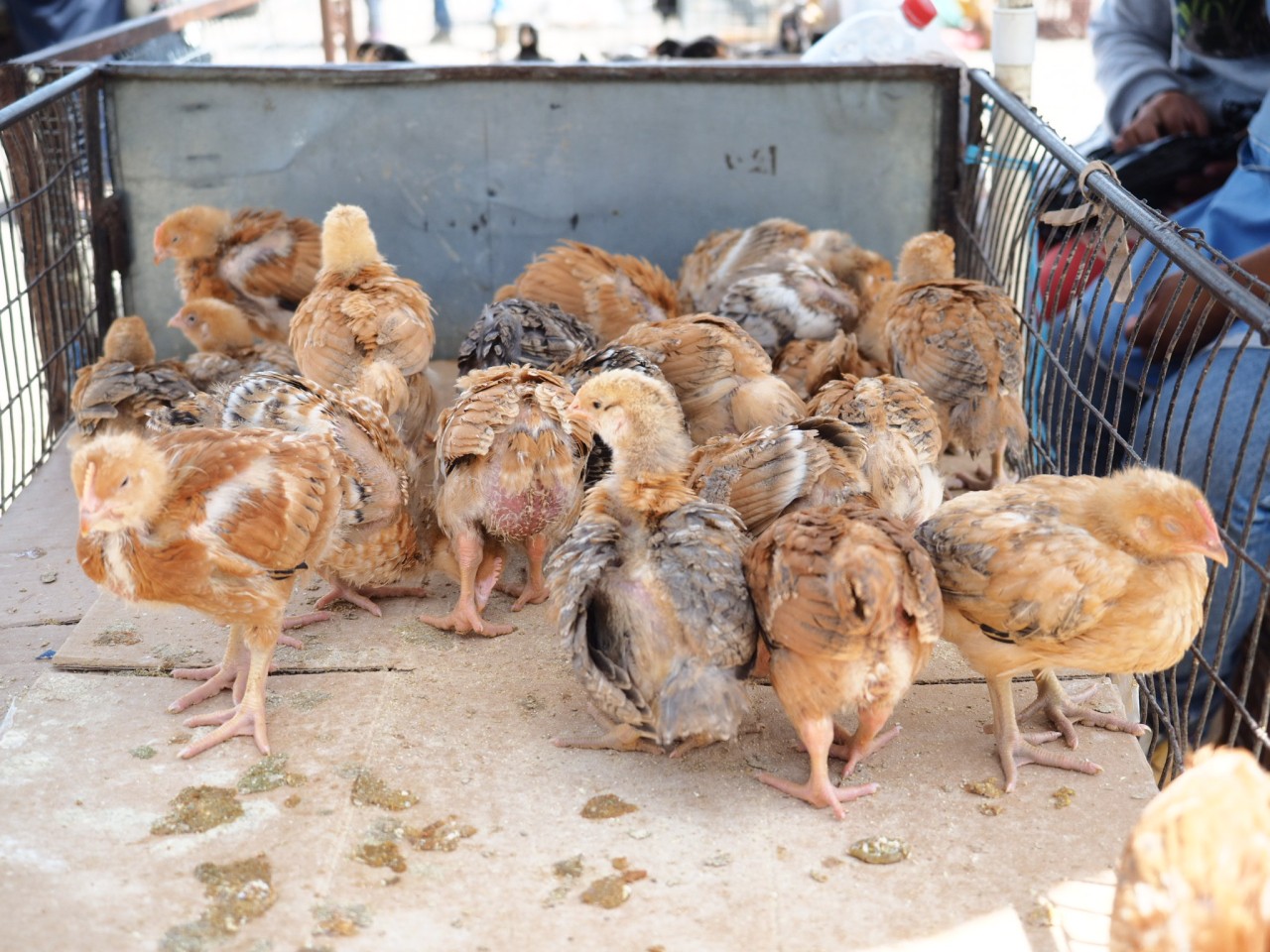 I moved on to the central market, which sprawled from Poncho Plaza throughout the streets of Otavalo. Vendors sold everything from cheap cotton shirts to diapers to toiletries to knock-off shoes. But the highlight of the market, and the reason it’s so famous, were the many, many Otavalans selling traditional handcrafted Ecuadorian goods. Much of it was geared towards tourists but quite a bit was very utilitarian. The market has been in existence for eons and remains a brilliant showcase of local indigenous culture, with the women in their traditional dress and the men with their long dark hair. Despite how touristy it is, it’s absolutely worth checking out.

They say a picture is worth a thousand words, so here’s a look at just a few of the things you can buy there: 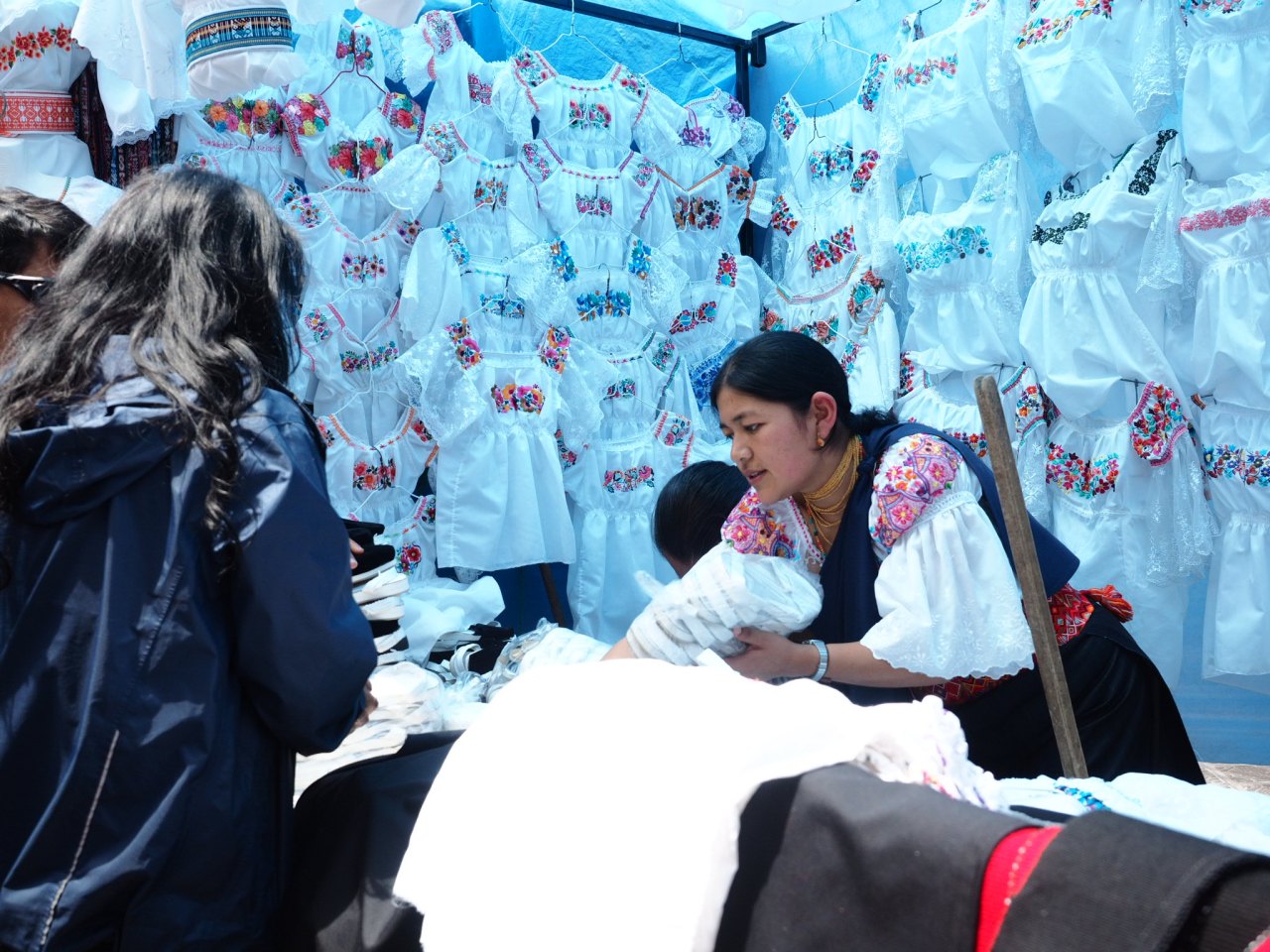 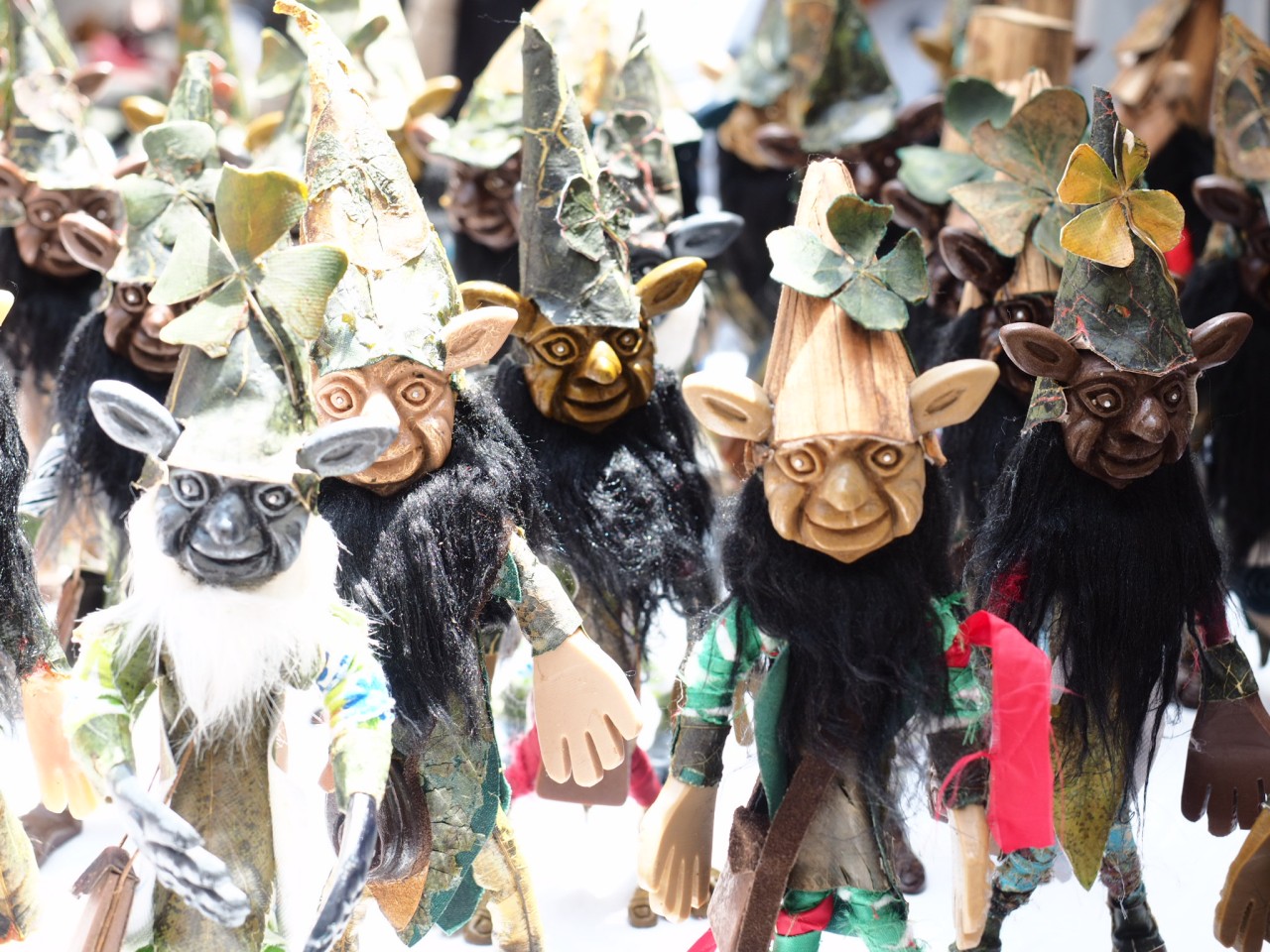 I left Otavalo on Sunday with a slightly heavier load. I had a short day planned – a 17 kilometre ride to Laguna de Mojanda and a hike to the top of Fuya Fuya, which tops out at 4,279 metres. I left the city on a steep cobblestone road that never let up. Most blogs about bike touring in Ecuador talk about the rattling these roads induce, but my Salsa Fargo handled it fine, though it wasn’t easy and progress is definitely slower on the cobblestones. I reached the lake around one and had lunch at the makeshift cafe run by local women on weekends before starting the hike up Fuya Fuya.

I was about 15 minutes into the hike when I realized I left my water bottle behind – not a smart thing to do at altitude. It wasn’t a long hike so I kept going rather than doubling back. The trail climbed steeply through tufts of yellow grass, making quick work of the 600 metres of elevation gain. It was slow going because of the elevation but as long as I kept a slow pace, I was fine. As I climbed, the crater lake revealed itself below and glacier-capped Volcan Cayambe emerged into view beyond the far ridge. I reached the top and watched as the clouds from the west ran into the mountains and whispered across the meadows below. 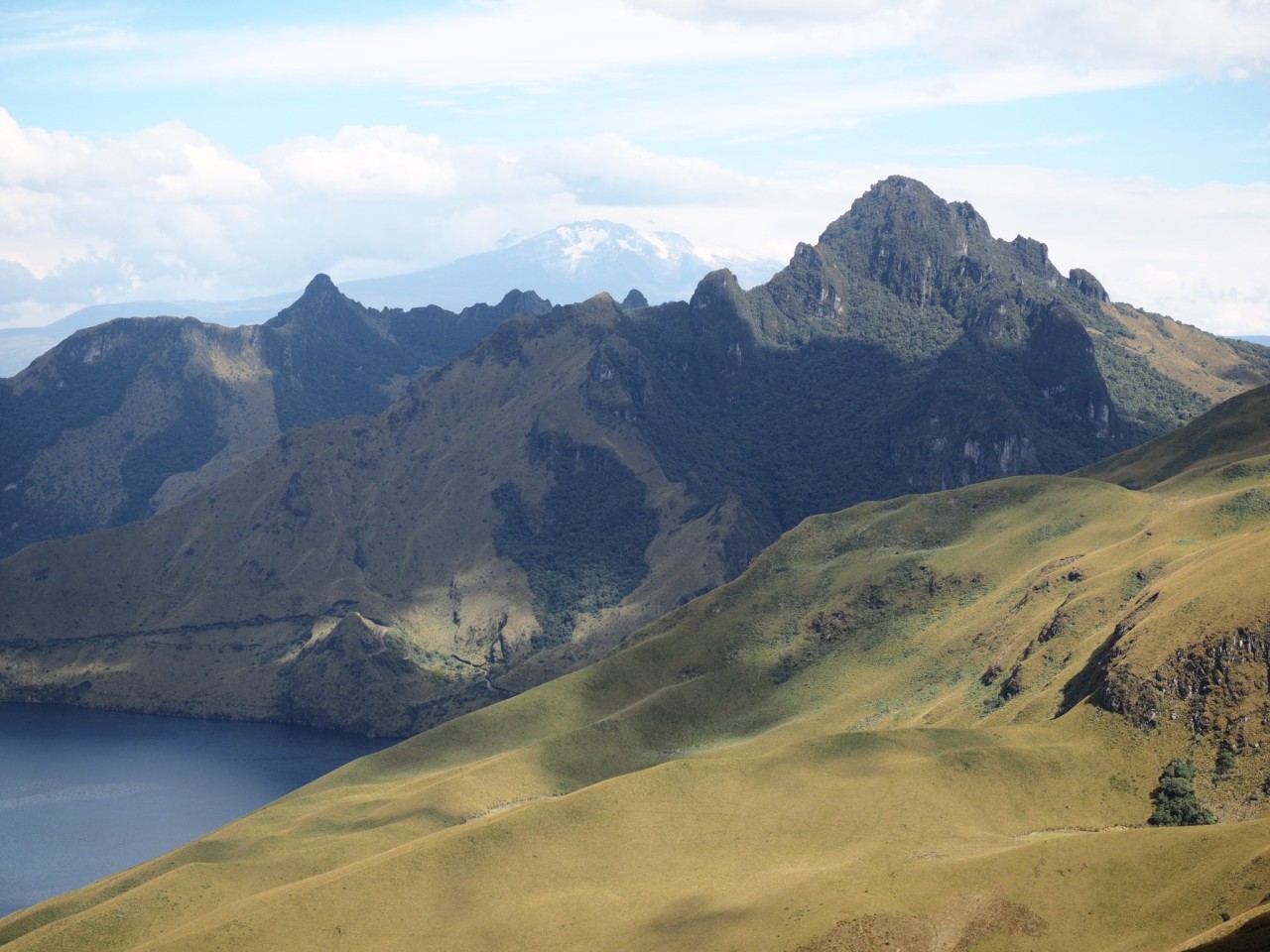 That night I camped by the lake and watched the moon rise next to a campfire lit by a French couple and their Belgian friend. It was a fabulous day and I went to bed early because I hoped to ride 105 kilometers to the casa de ciclista in Tumbaco outside Quito the next day.

The ride was mostly down, starting on a very rough dirt road before I reached some pavement, followed by a stretch of sandy roads. Eventually I hit the Pan-American, where I had a very anti-climatic equator crossing (the only indication was a red dash at the side of the road). I followed the Trans-Ecuador Mountain Bike Route up the highway, onto another dirt road that was cut into the side of a canyon, then onto an old rail trail, where I was stopped by a landslide that had blocked a tunnel. I turned back and was able to pick up the trail a bit further on and followed it most of the way to Tumbaco, right to the door of the casa de ciclista, where I was greeted warmly by the owner Santiago. 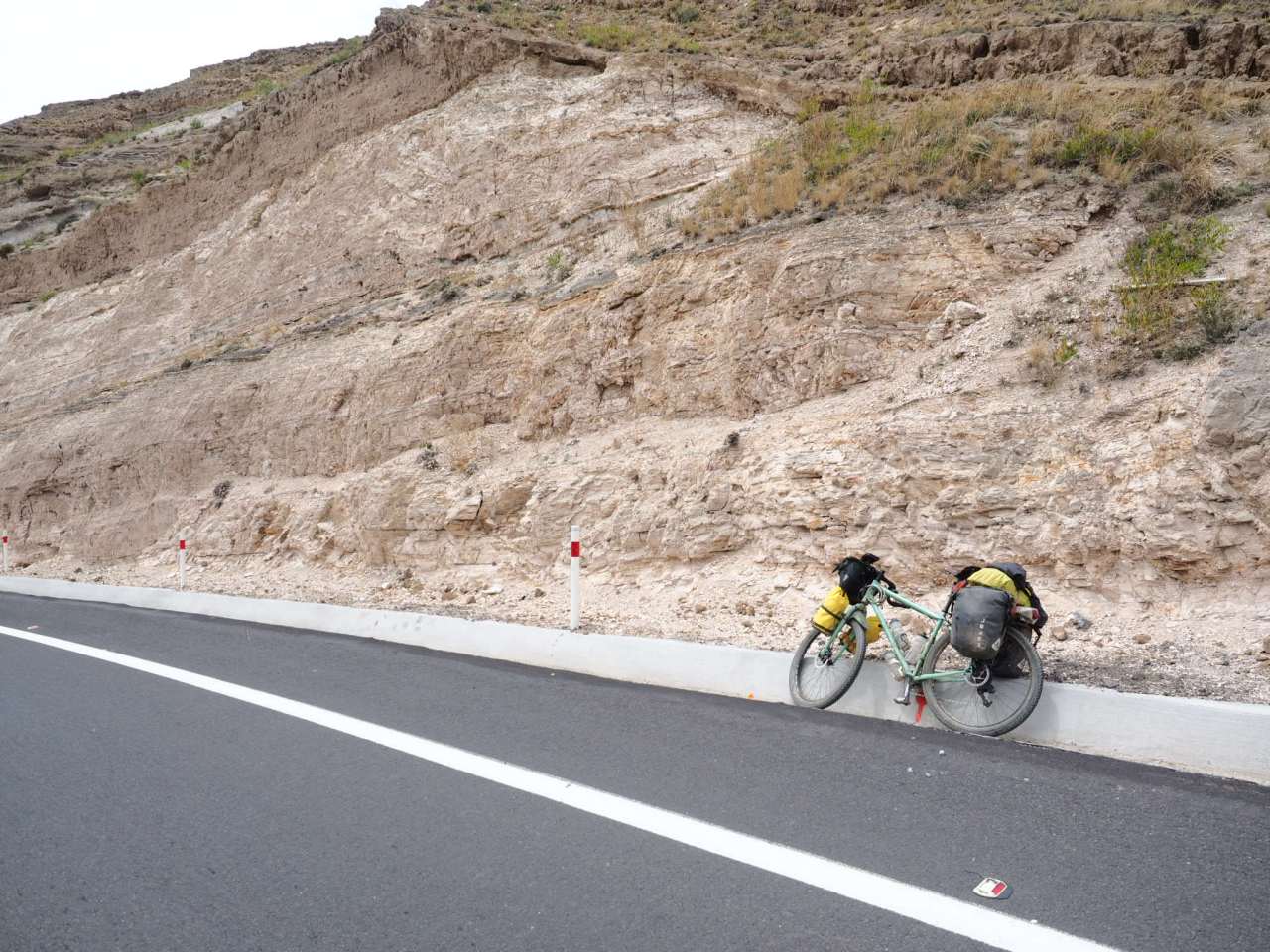 Santi, as he’s known, is a legend on the South American touring circuit, having opened his house to cyclists for some 30 years. He owns a nice home with plenty of space on the lawn for guests to pitch their tents. I was the only Gringo amongst a hodgepodge of South American cycle tourists and was offered a shady spot to set up.

My first day at the casa I traveled into Quito to find a place to get my laptop fixed. It took a few tries, but in finally found the official Lenovo repair centre and left it with them. The next day I probably should have rested, but knowing I was about to fly to the Galapagos, I decided to go back to the city to take in the free walking tour. We met at the Community hostel and ambled through the central market and into the historic city centre. We walked along beautiful streets lined with well-preserved colonial buildings, stopping in various plazas, learning about the city’s and country’s history, and entered one of several incredibly elaborate churches built by Christian missionaries over the years.

Quito’s city centre is a South American highlight, but despite being full of tourist sites, it still maintains a bit of local charm. It helps that all the over-priced tourist restaurants are further north in the La Mariscal neighborhood.

After a nice lunch of ceviche and fish at the market I returned to the casa and packed my bags for the Galapagos and a bit of rest and relaxation.

You can view the GPS track for this route here: https://ridewithgps.com/routes/26716921 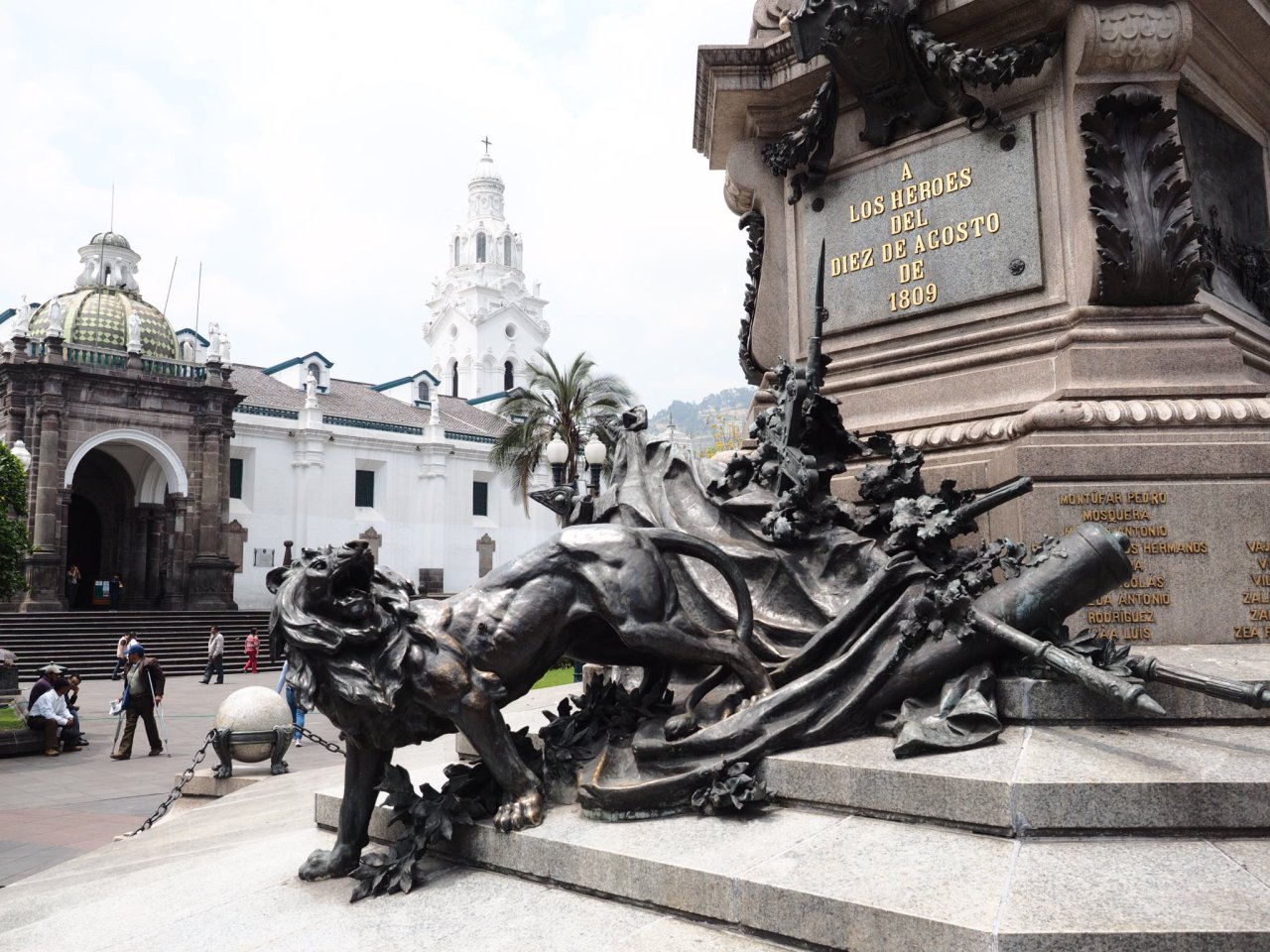 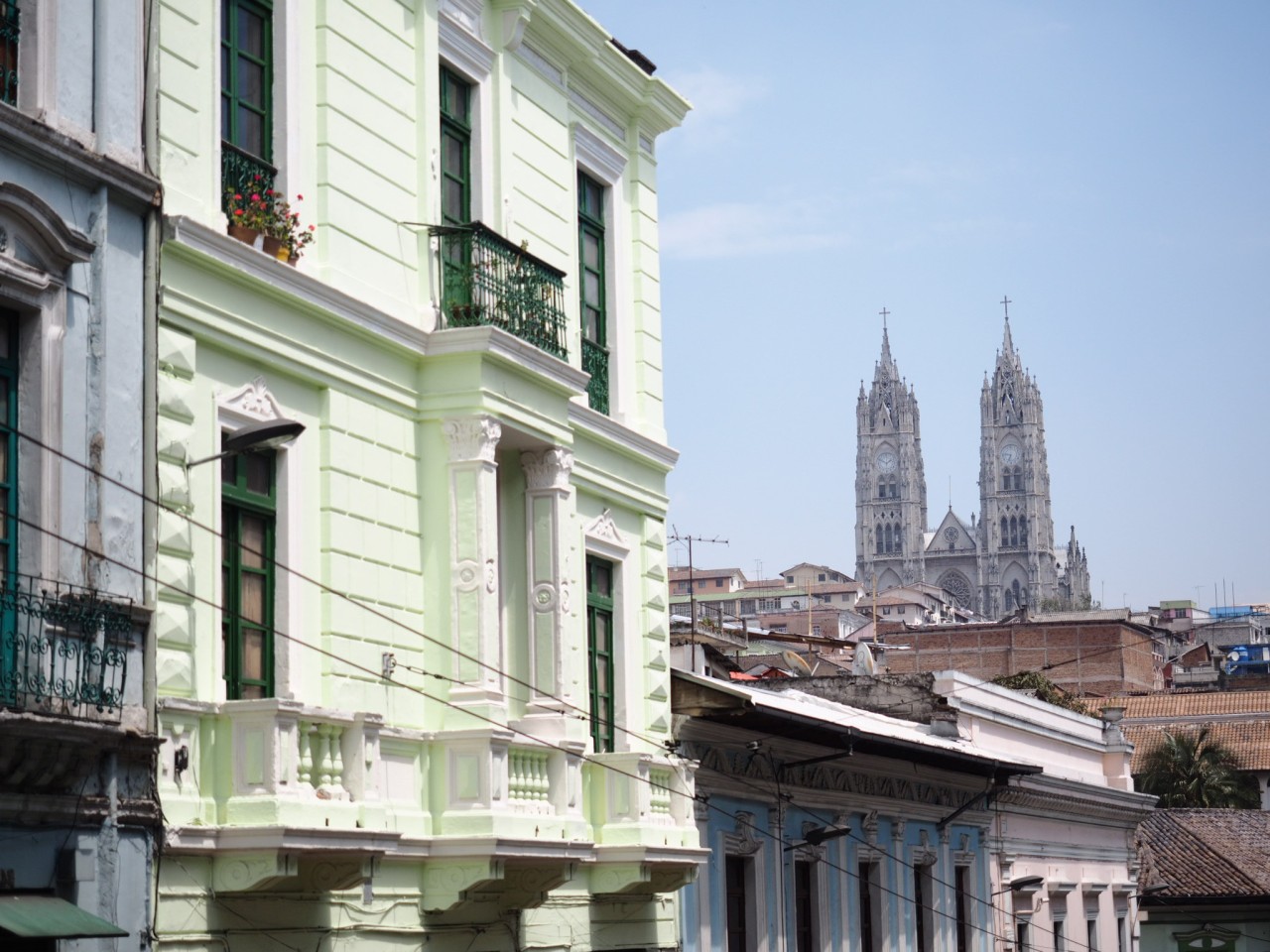