From sea level to 5,000 metres: Quito to Cotopaxi

I was keen to leave the Galapagos and return to the mountains and my bike. But first, I had some unfinished business to take care of in Quito before leaving on the second stage of my adventure through the Andes.

I landed at the airport and headed straight into Quito instead of dropping by the Casa de Ciclistas in Tumbaco, which would have been on the way. My friends Rob and Krystin were there on vacation and we had a day to hang out. I made the long trip into the city and met them at a brew pub for dinner, where I got a great burger and, more importantly, a couple of really good beers. Most of the beer in South America has been pretty generic, so it was great to have an IPA for the first time in two months. Also, a guy drew a sketch of us enjoying our beers:

The next day we and a few others from the hostel took a tour to Mitad del Mundo – a series of kitschy tourist attractions right on the equator. Our first stop was a lookout over Pululahua, a dormant volcano who’s crater has been turned into farmland by the locals. We then got take to the Intinan Solar Museum, which features small exhibits on Ecuador’s indigenous communities, and a bunch of demonstrations about things you can only do on the equator – like balancing an egg on the head of a nail and walking in a straight line with your eyes closed. I’m pretty sure some of the “facts” are made up, but it was still fun. FYI, I succeeded in walking in a straight line, but not at balancing the egg. Next, we went to the official equator monument, which it turns out isn’t quite on the equator. Feeling equatored-out, we decided to not enter the museum and instead just took a group photo outside before heading back to town. 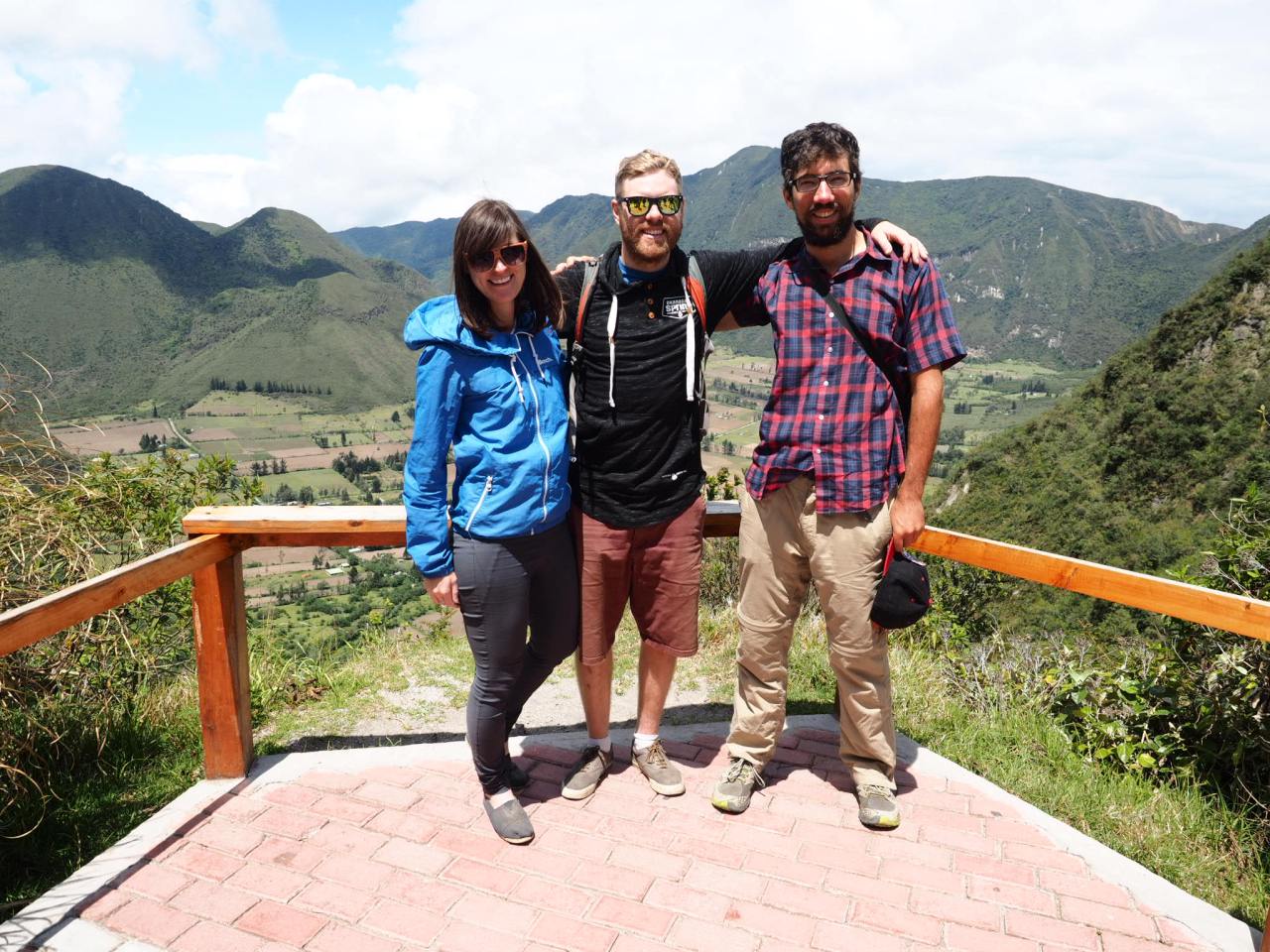 Krystin, Rob and I at Volcan Pululuhua

Sadly, Rob did not buy this sword.

A sundial on the equator.

Me, on the equator. 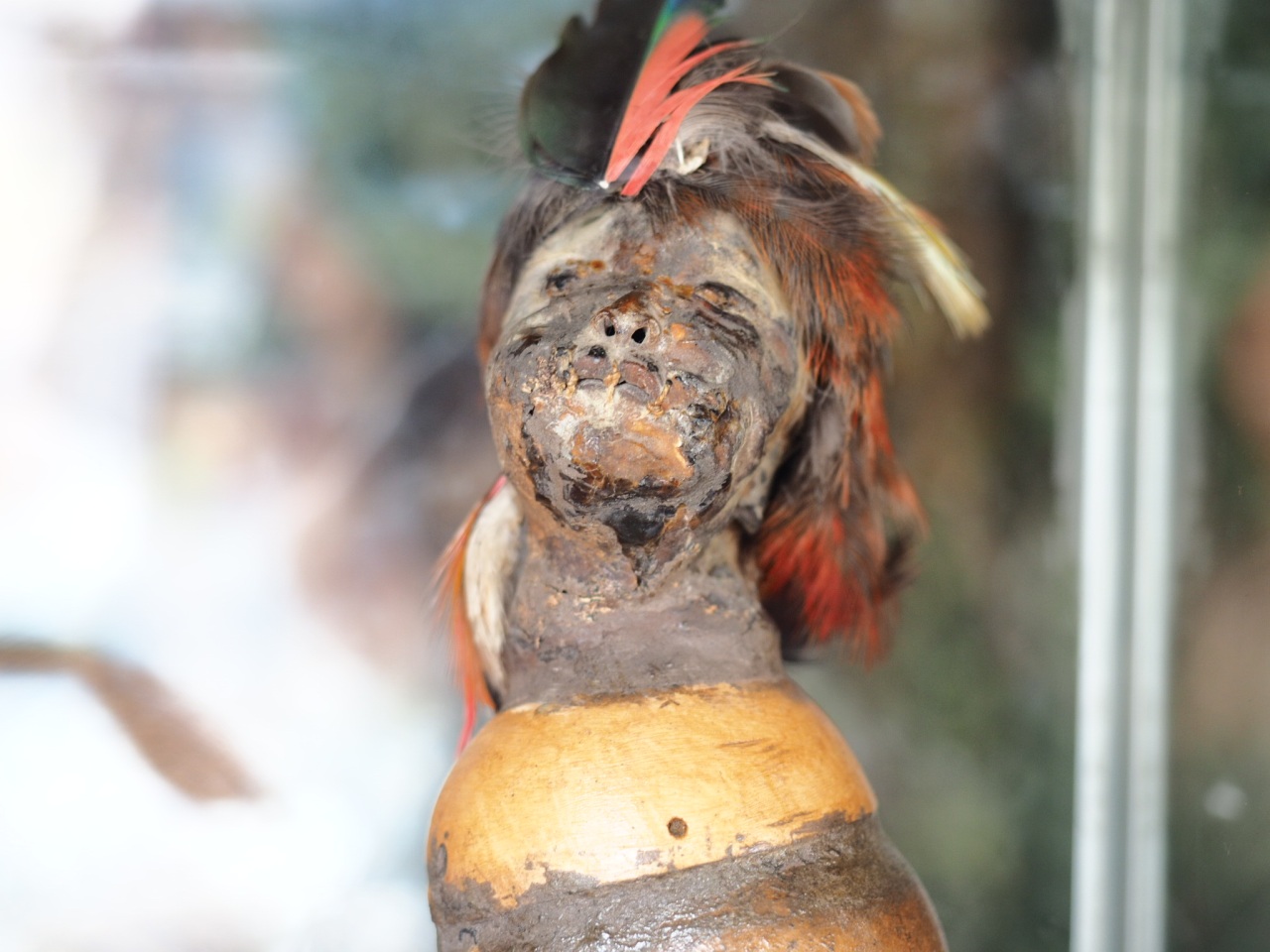 John tried to balance an egg on the equator. 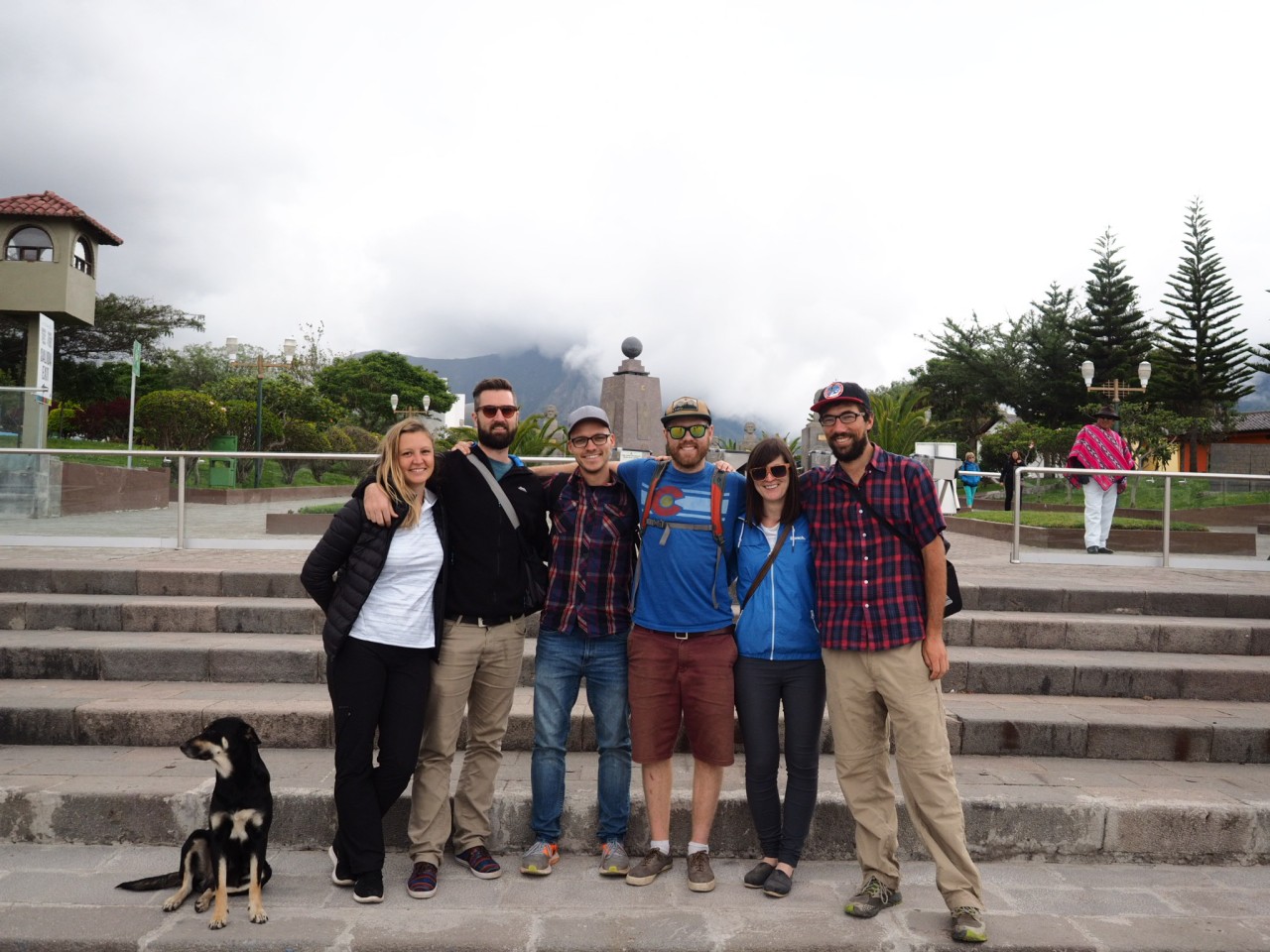 That night I said farewell to Rob and Krystin, who flew back to Canada in the morning. The rest of us decided to head up Quito’s TeleferiQo and go for a walk up Ruca Pichincha, a 4,700 metre high peak that looms to the west of the city. The gondola whisked us up from the city into the alpine at 4,000 metres. Considering I’d been at sea level less than 48 hours earlier, I was suffering a bit from the elevation. We admired the views of Quito below, masked slightly by the haze, and tried to identify the half-dozen glacier-capped volcanoes visible to the west. We wandered off through the paramo, along a trail lined by tussocks of tall grass towards the summit of Ruca Pichincha. While the trail was fairly gentle to start, we made slow progress, stopping frequently to take photos and catch our breath. I didn’t plan on going to the summit and packed accordingly (meaning I didn’t have enough food or water), but as we got closer, I knew I would be going up, especially with Joseph so keen to make it.

The first three-quarters of the trail followed by a ridge, while the last quarter went straight up to the top. We struggled up the deep sandy slope before I realized there was a much easier path to the right. From there, it didn’t take long to reach a col, where Joseph and I began the scramble to the top. Elodie stopped at the bottom of the climb and her partner John turned around at this point. For me, it was the highest I’d ever been.

Looking down at Quito, almost lost in the haze. 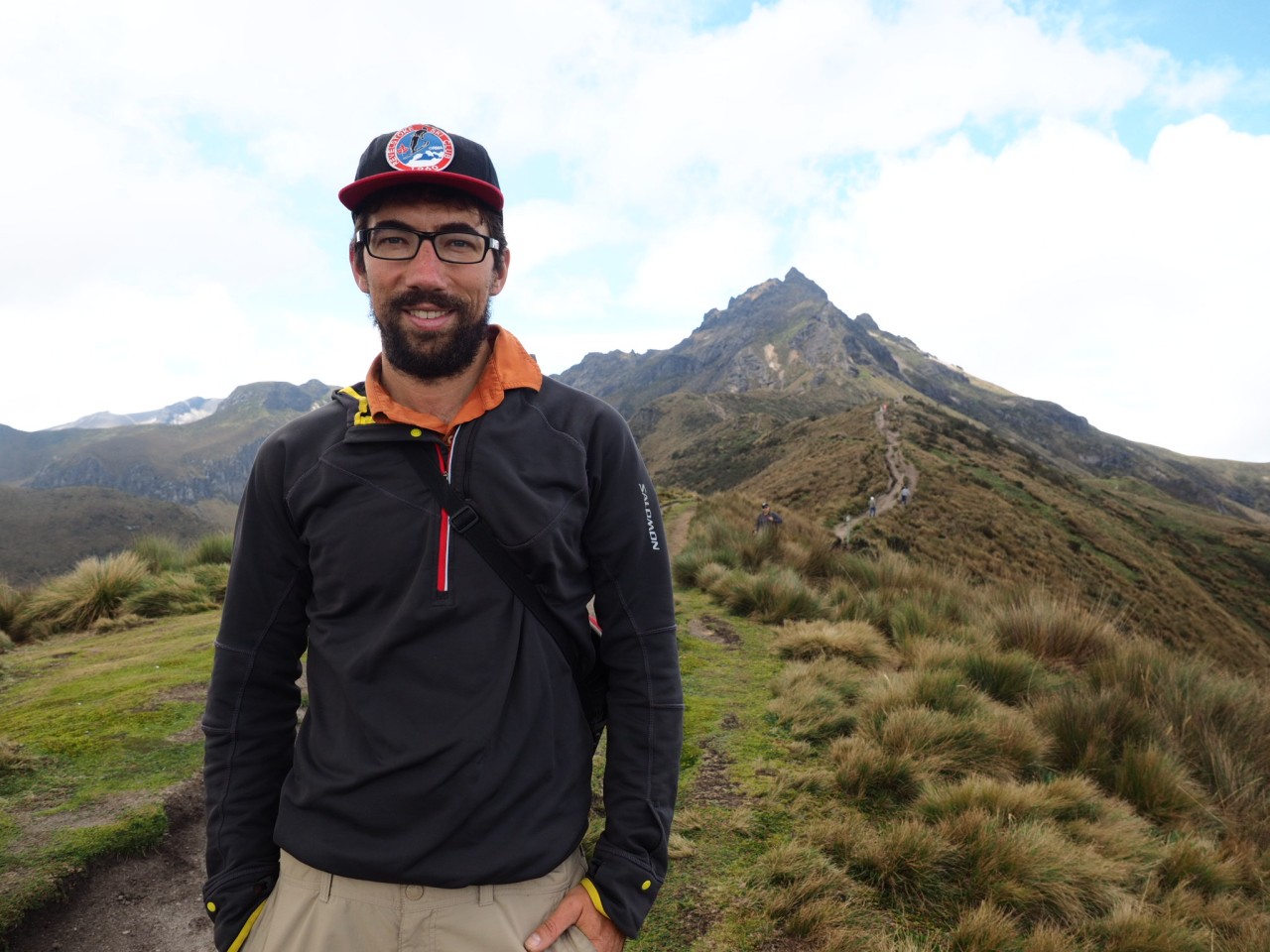 Me, with Ruca Pichincha in the background.

Heading towards the top of Pichincha. Not long after this, the trail would get really steep.

The views from the 4,700 metre summit were incredible. The clouds parted to reveal a sprawling range to our north and south. To the west, an endless sea of clouds hovered over the jungle plain leading to the Pacific Ocean. A pair of colourful birds posed for photos as we admired the view. The way back down started off trick, but once we hit the sandy slope, it was fast going. The sun emerged even brighter than before, and the haze lifted off the city below, giving us even better views.

Looking down at Quito from the summit.

The view from the top.

These birds were happy to pose for us.

Quito emerged from the haze as we returned to the teleferico.

Returning to the city, I grabbed my bags and returned to the casa de ciclista in Tumbaco. I spent three days there – one doing nothing, another running around the city in an unsuccessful attempt to find a new charger for my laptop, and sending a package home, and the third working on my bike. On my second night back, a New Zealander name Michael showed up with the plan of riding a route called Los Tres Volcanes. As it’s name suggests, the route passes three volcanoes – including the two highest in Ecuador – Cotopaxi and Chimborazo. Since our routes mirrored each other until Cotopaxi National Park, we agreed to set out together. 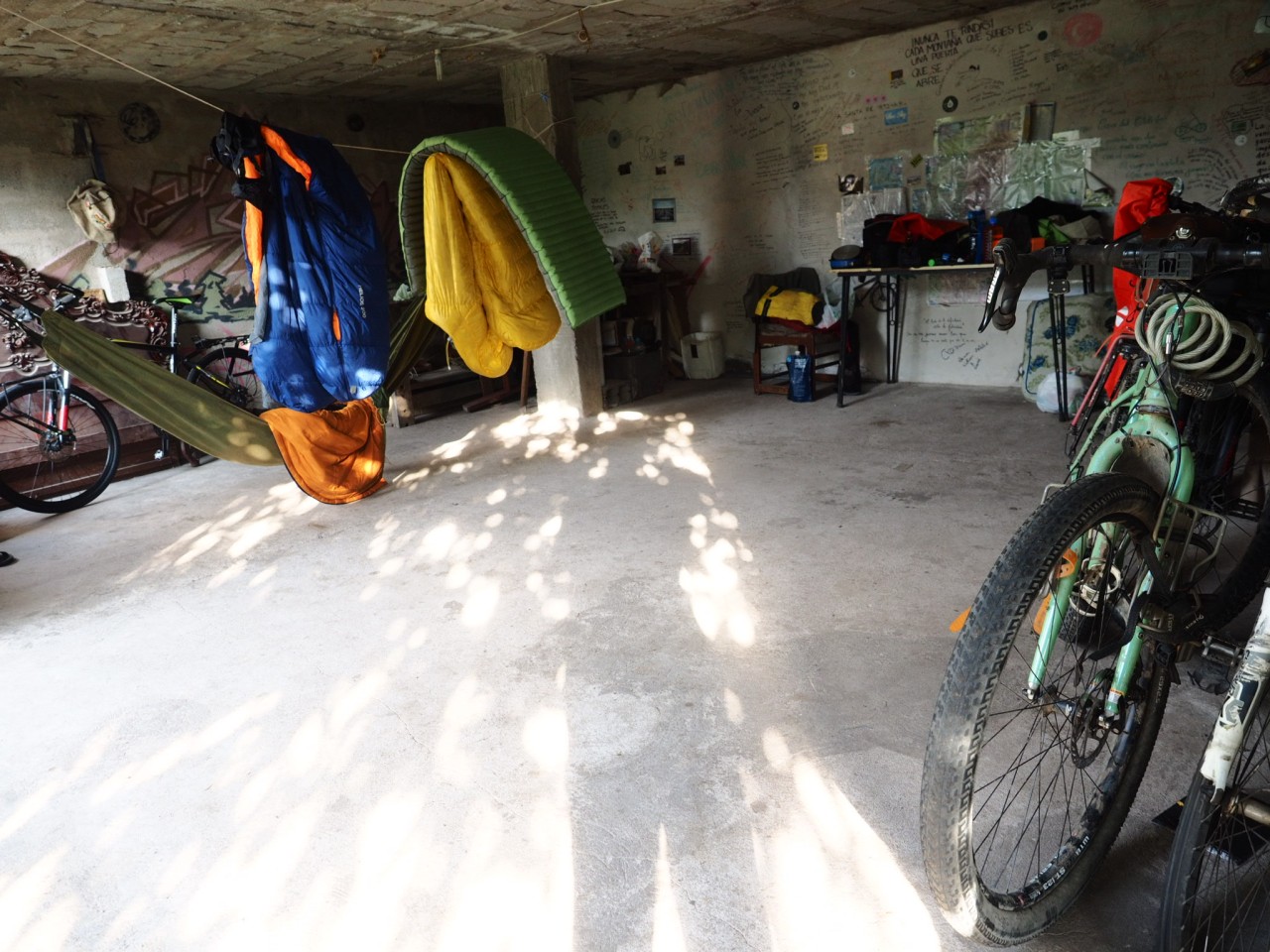 The bunker at the casa de ciclista. 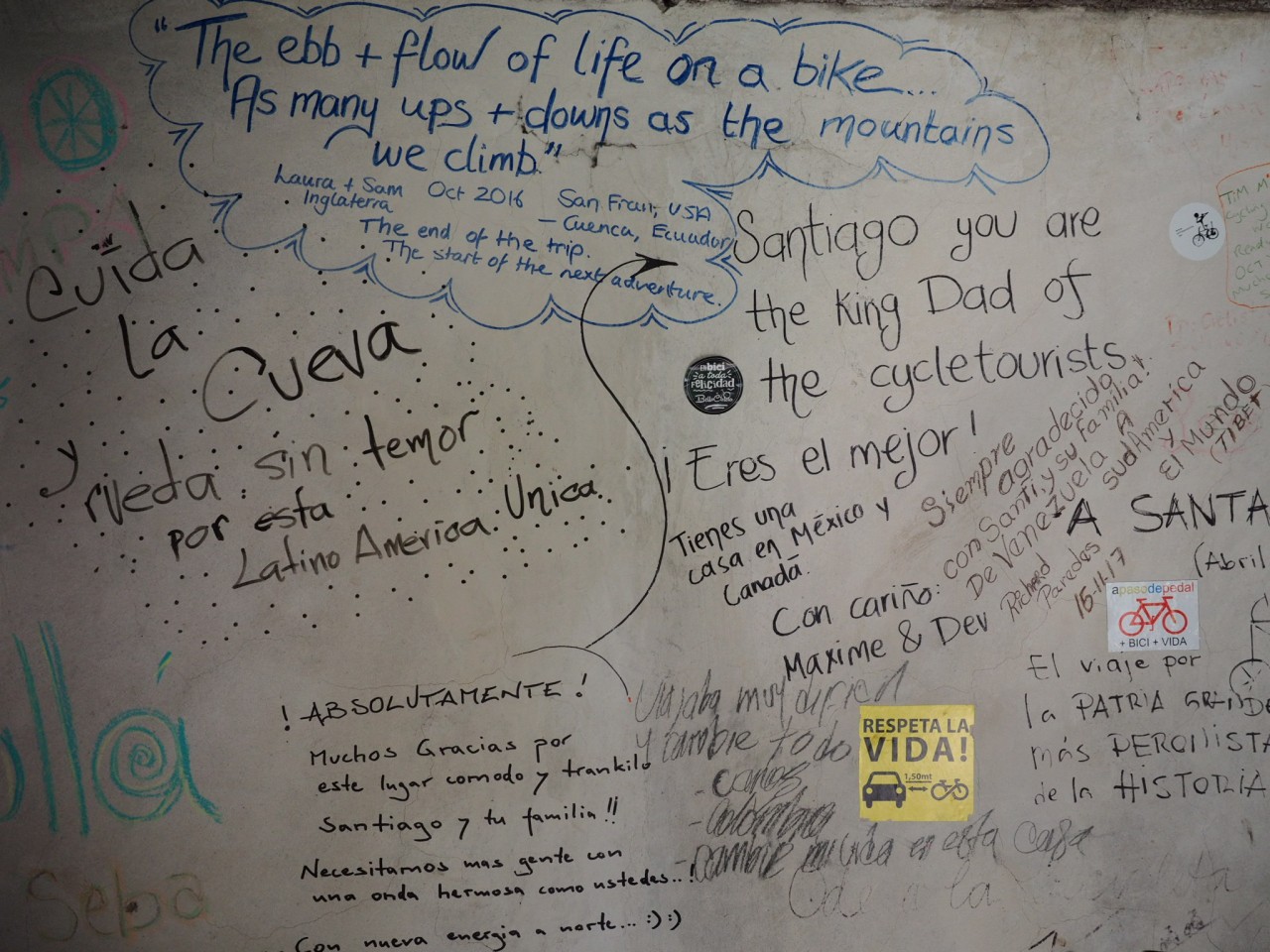 The walls of the bunker are filled with messages from other bike tourers.

Like any good casa de ciclista, there are lots of old bikes lying around.

Saying farewell to the casa.

It was a Wednesday – 16 days since my last day on the bike – that Michael and I set off together. We rode out of the city, into the countryside, riding a mix of dirt and cobblestone roads to Pintag, where we stopped for lunch. We could see Cotopaxi’s iconic cone in the distance, beckoning us onwards. And while I hoped to make it to the park in one day, the mix of long climbs and endless cobblestone roads after lunch slowed us down immensely. As it got later, it started to rain and finally, at around 5:30 p.m., we were allowed to camp in a farmers field. 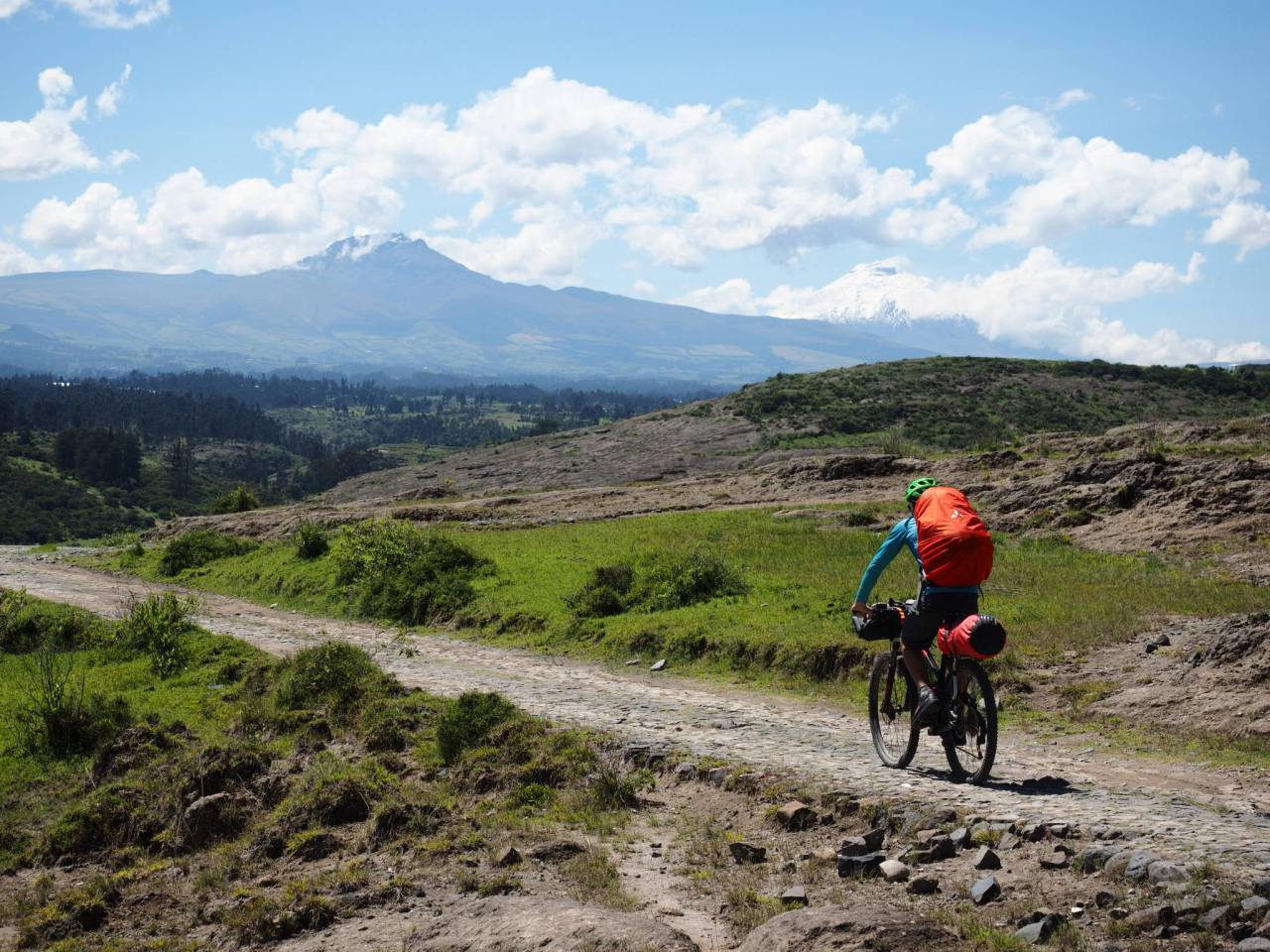 Riding off towards Cotopaxi.

Michael rockets down a cobblestone descent. Unfortunately, most of the riding was up these same-style roads. Not fun!

Michael rides into the sunset just before a brief shower hits us.

We were allowed to camp in this farmers field. They kindly brought us a big jug of creek water to cook and drink. Naturally, we filtered it first.

The next we got off to a slow start as Michael adjusted his packing system to remove some weight from his huge backpack. Part of me wanted to get going, but another part of me was content to sit back, knowing we didn’t have far to go to get to Cotopaxi National Park, so why rush? My only concern was that it was pretty cloudy and rain threatened, and I hate to waste valuable hours of dry weather.

It was about 10 a.m. when we finally left the farm. We continued on a mix of dirt and cobblestone roads that were relatively flat, but punctuated by one really steep climb. Soon, we left the last farmers field behind us and entered into a wide open plateau criss-crossed by rough roads and a raging creek. We stopped to put on our rain gear and kept going – the incredible scenery more than making up for the inclement weather. There was a bit of hike-a-bike as we entered the national park on rough jeep tracks that were occasionally little more than a set of tire tracks through the grass. Cows and horses grazed as we pedaled through the dramatic landscape, though Cotopaxi itself was hidden in the clouds. 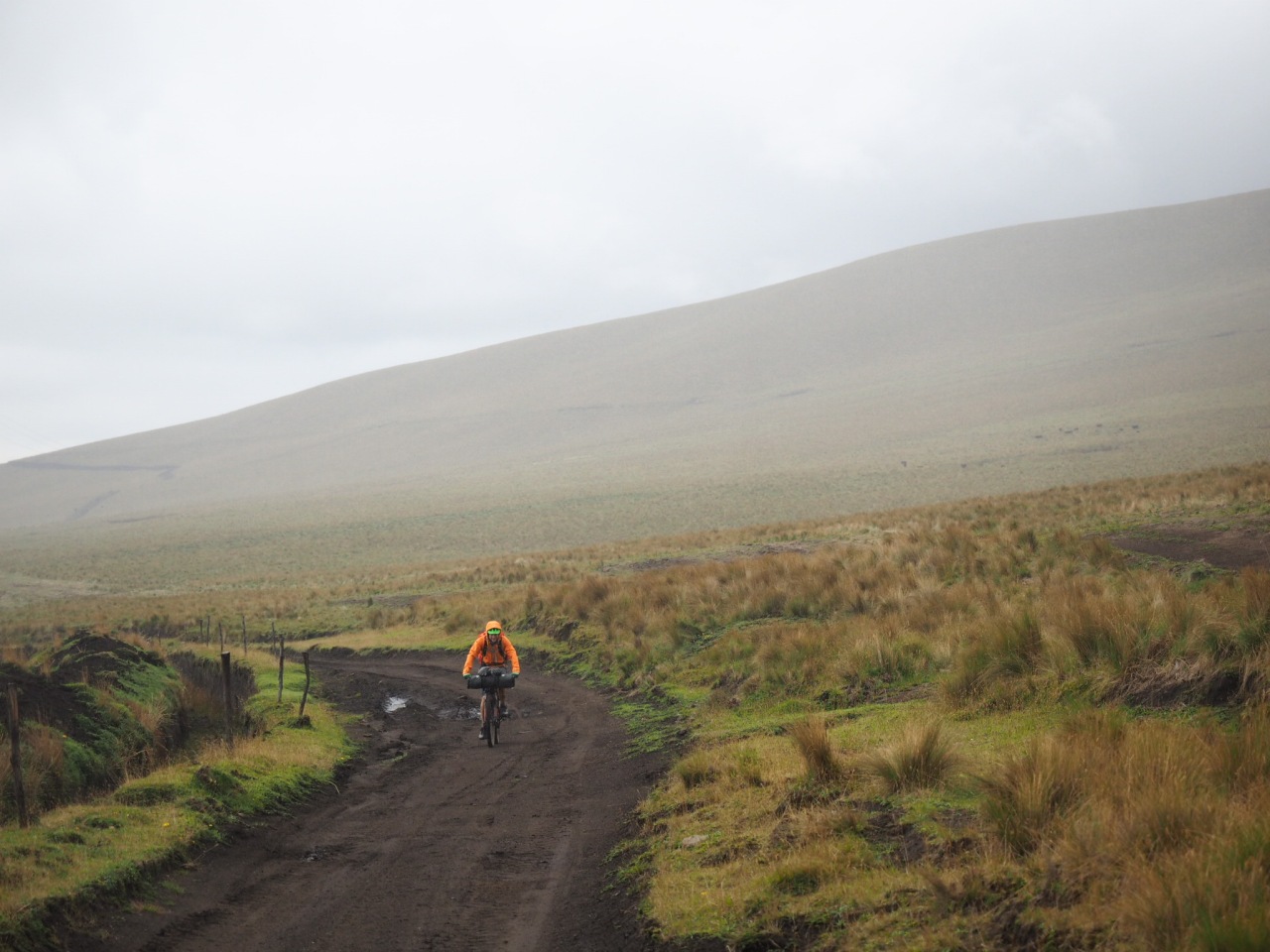 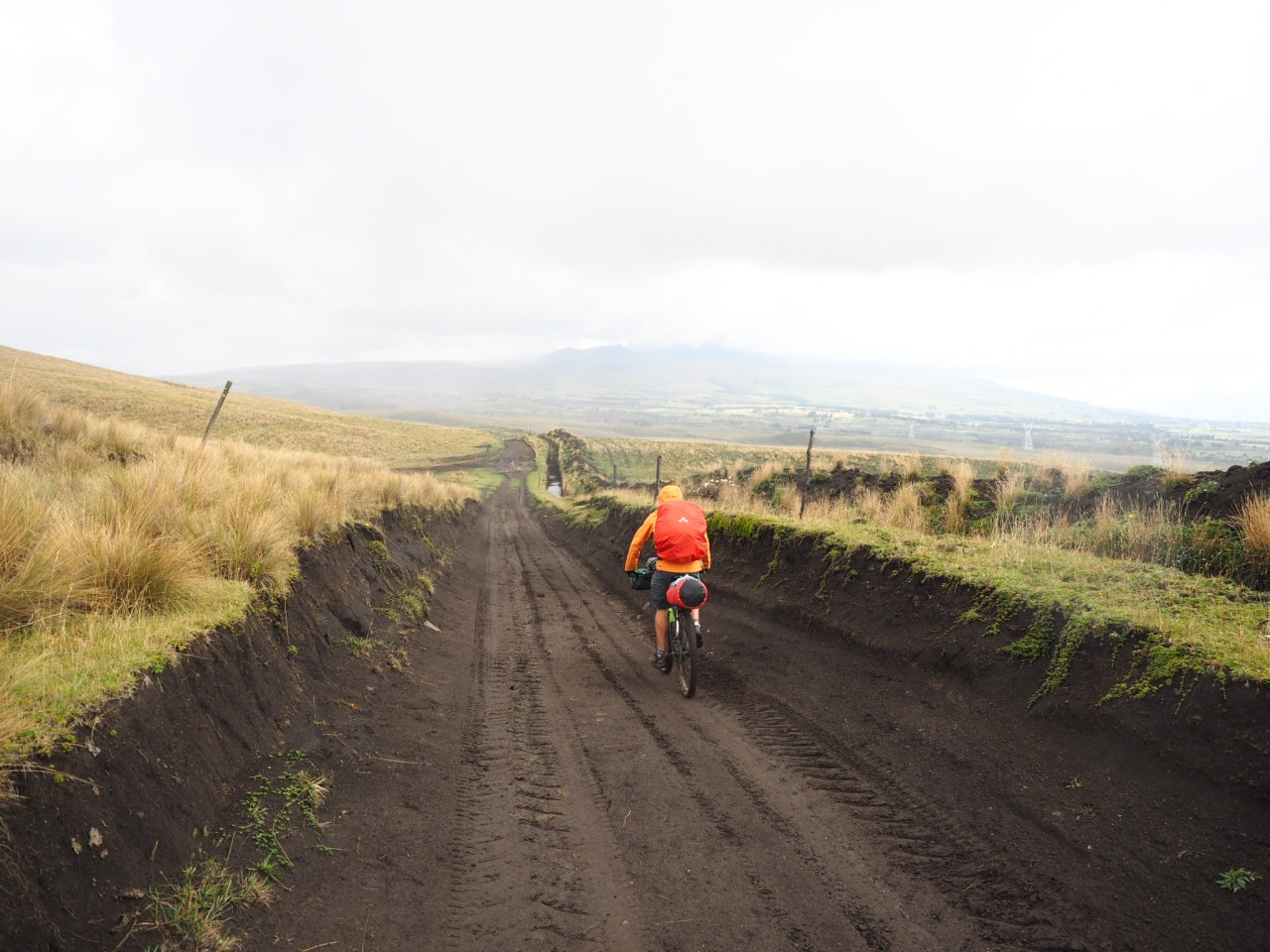 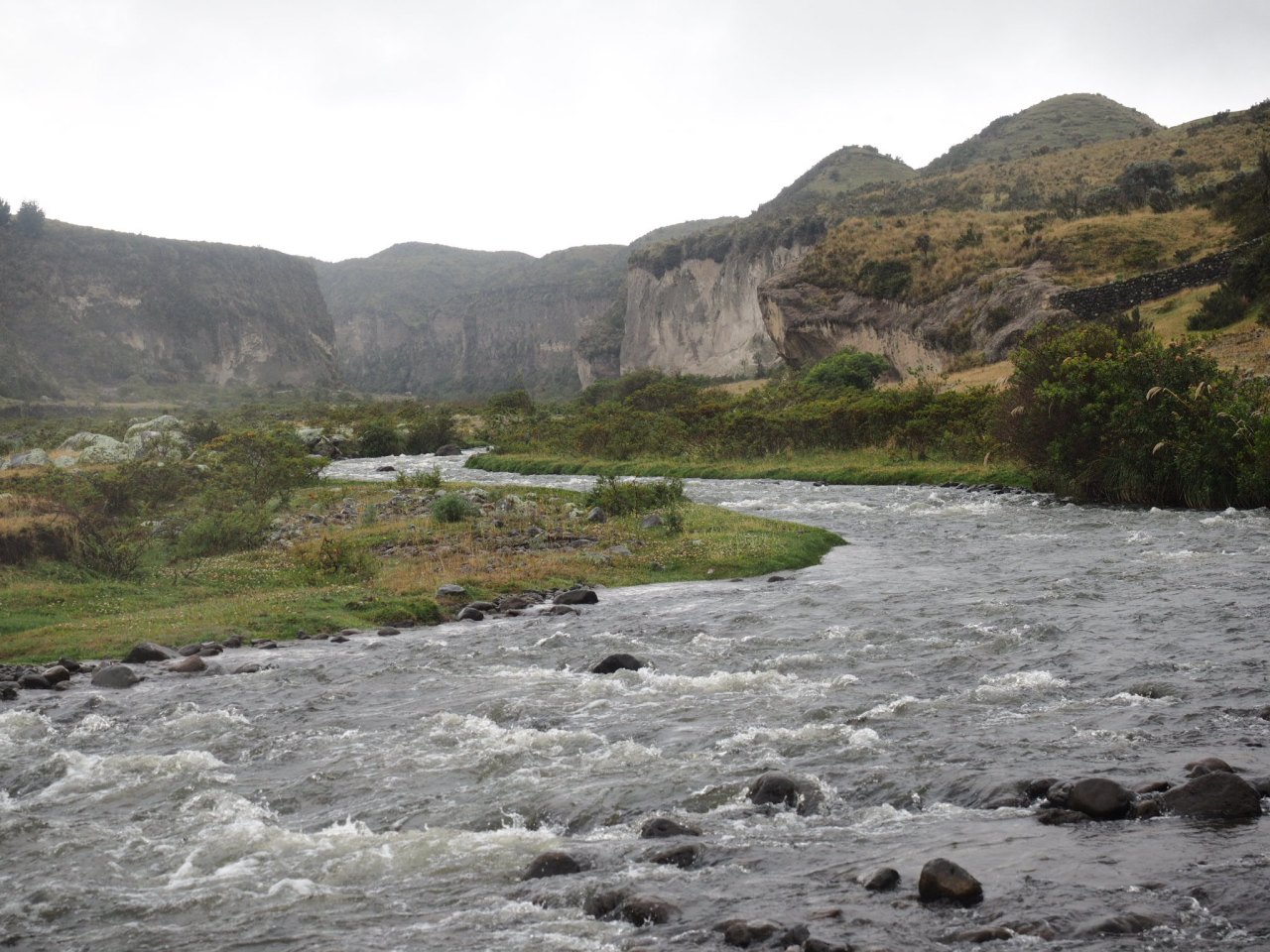 A little hike-a-bike was required to get into the park. 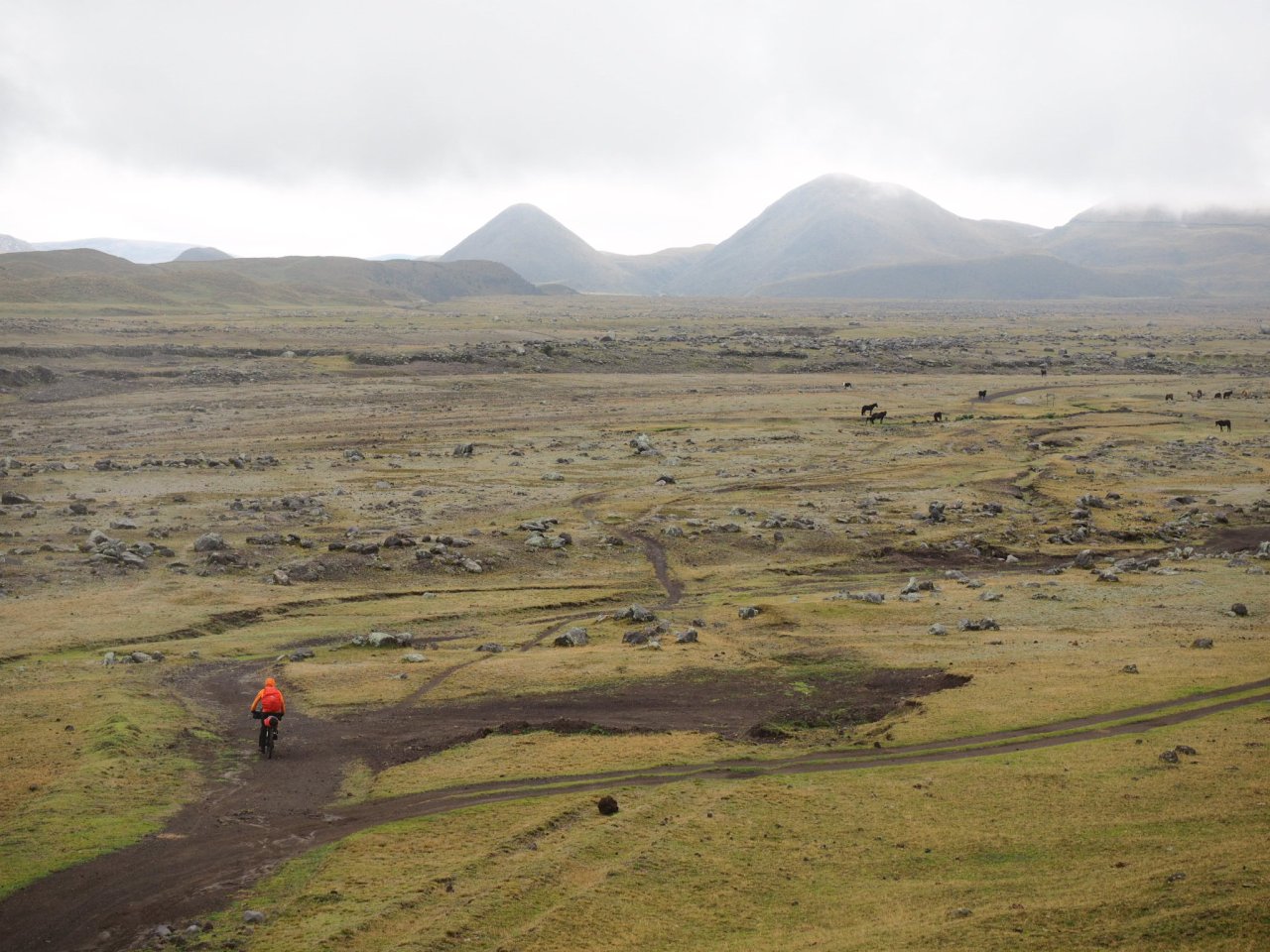 Riding through the northern edge of Cotopaxi National Park.

The views inside Cotopaxi National Park.

At this point Mike and I split up. He was taking the more challenging, single-track route around the east side of the volcano, while I, with my rigid bike and heavier load, opted for the easier west route. I finished the climb and cruised downhill to the visitor centre for a delicious lunch. With the rain incessant, I found an unlocked, unused cabana, and laid out my sleeping pad for the night, hoping that Cotopaxi would reveal itself the next morning.

I woke up the next day under the cover of cloud, but I could feel the sun shining through and had hopes that it was clear higher up. I locked up my bike at the visitor centre and filled up water bottles, then stuck out my thumb in order to hitch a ride to the Refugio Jose Rivas, which sits at a lofty 4,850 metres. I was picked up by a group of friends on holiday who were heading to the north end of the park to go fishing. We sped up the road, through the thin layer of clouds, and Cotopaxi emerged into view, it’s cone topped by a wisp of clouds, like a white-haired wizard. I was dropped off at the junction of the road to the refugio and I admired the view and enjoyed the sun’s rays as I waited for another ride.

Cotopaxi, in all it’s glory.

I was picked up by a group of two French and two Germans who had hired a guide to take them to the refugio and the glacier above. I jumped into the back of the truck and we sped away to the parking lot. From there, it was a short but slow walk up a meandering trail to the refugio. I was able to keep a slow but steady pace at this elevation, but had to keep my head down, lest I get dizzy.

The refugio was a surprisingly nice and spacious building perched on a bench 200 metres above the parking lot. I pondered the effort it must have taken to bring up all the building materials needed to erect the brick structure. After a brief rest, we continued up to the glacier, another 200 metres above. The trail wasn’t too steep, but at this elevation, any exertion was slow going. Part of my reason for coming up here was to see how I react to elevation because I hope to climb Chimborazo, which at 6,300 metres high, is Ecuador’s highest mountain. I felt slow and light headed, but made it to the glacier 15 minutes faster than the guide said I would, so I’m not sure what to make of that.

Clouds move in as we ascend Cotopaxi.

Looking up at the glacier. 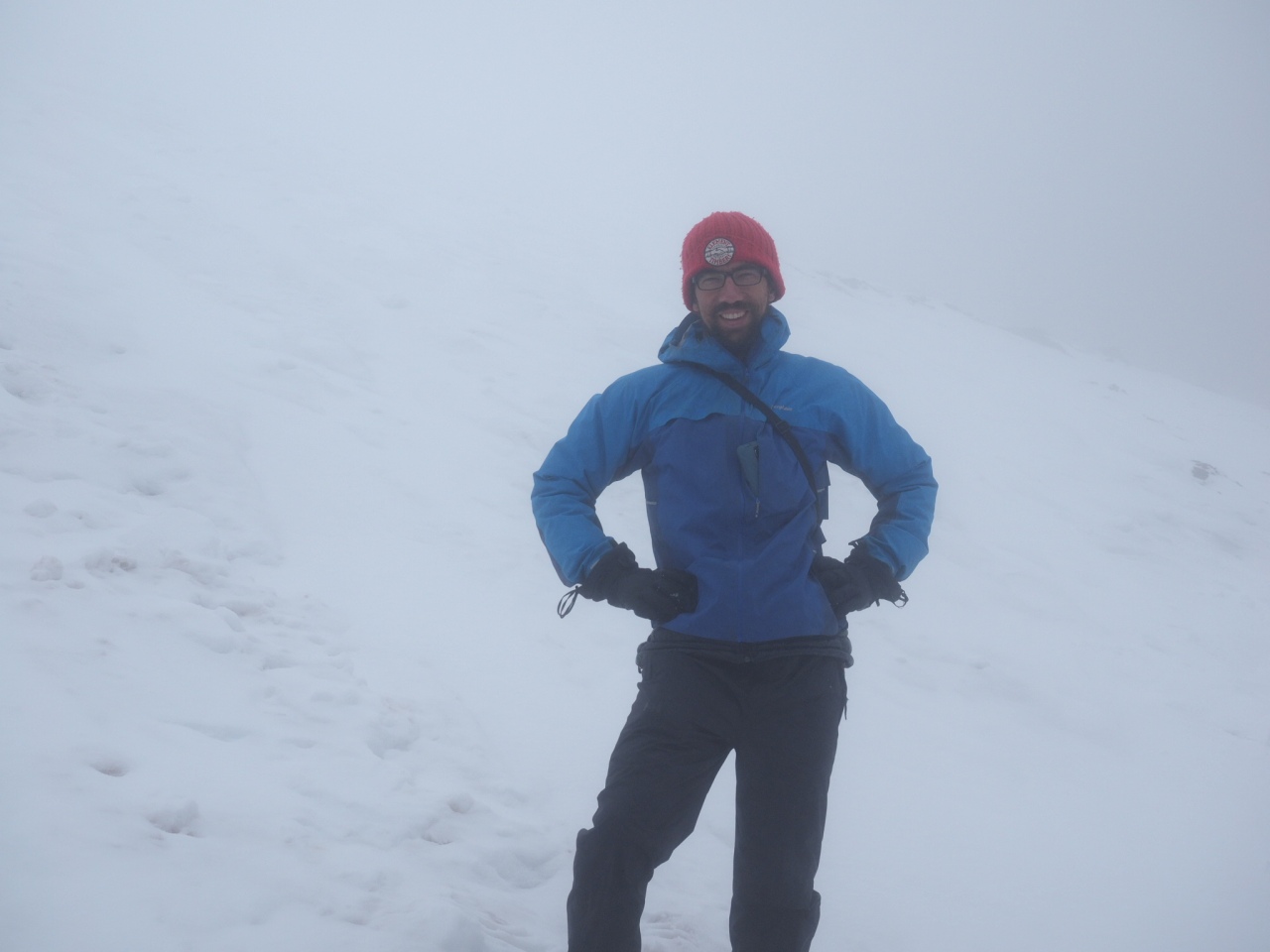 The clouds had moved in by the time we reached the glacier. We played around in the snow a bit before turning around and descending back to the refugio for a hot chocolate and sandwich. From there, it was a quick walk back to the truck, then a rocketing ride downhill to the visitor centre. On the way, the guide let us out to go for a walk through the paramo, where we enjoyed views of the canyons carved out of the earth by past eruptions of the volcano. 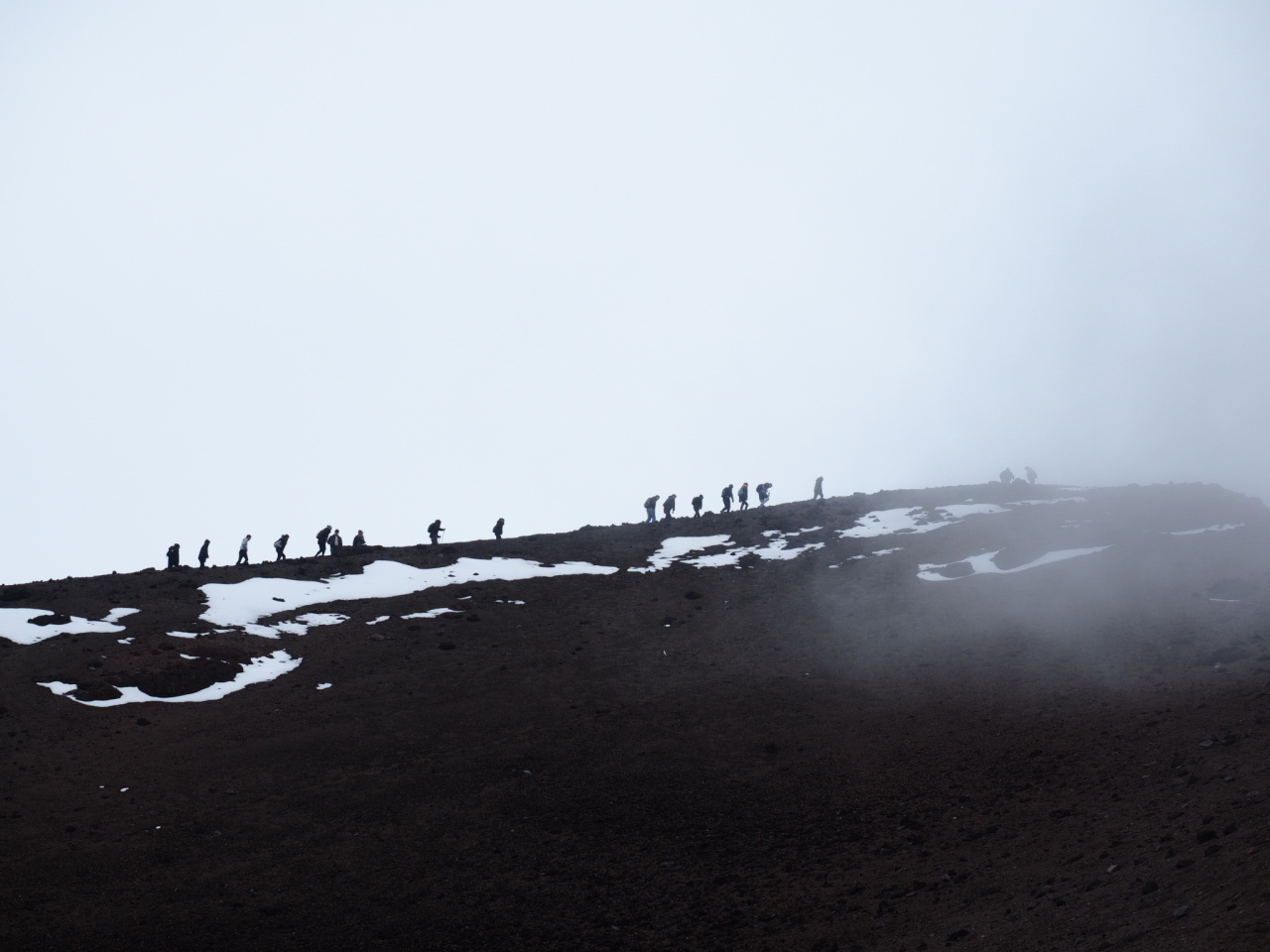 A big group hikes up the refugio as we make our way down.

The fast way down. 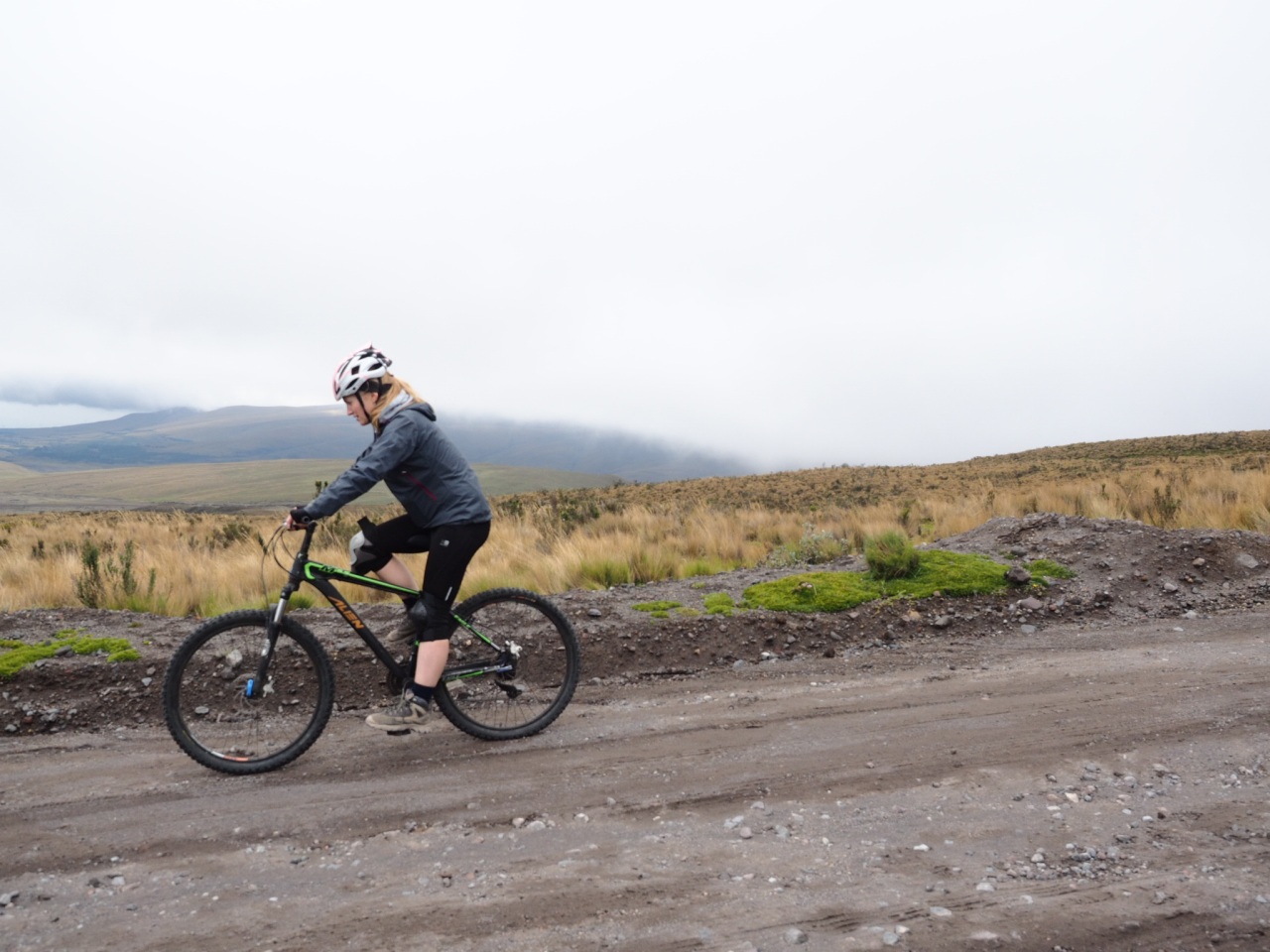 Mountain biking trips, where you drive up and then ride the dirt road back down, are very popular.

A canyon formed by one of Cotopaxi’s many eruptions.

Another canyon formed by the volcano.

That afternoon I rode down to the town of Lasso where I found a comfortable room with hot water at the Cabanas Volcanes. After a few nights camping in the cold, I wanted to warm up, dry out my gear and get ready for the next stage of trip through the Quilotoa region.

You can view the GPS track for this route here: https://ridewithgps.com/routes/26716998