Out of the highlands: From Salinas to Banos

Forty-seven years ago, an Italian missionary named Father Antonio Polo was sent to the rural Ecuadorian town of Salinas de Guaranda (also de Bolivar, depending on the map) to help build a school. He was there for three months, but decided that wasn’t enough to effect real change, so he went back. Salinas was a poor, isolated, rural community reliant on the salt mine for employment. 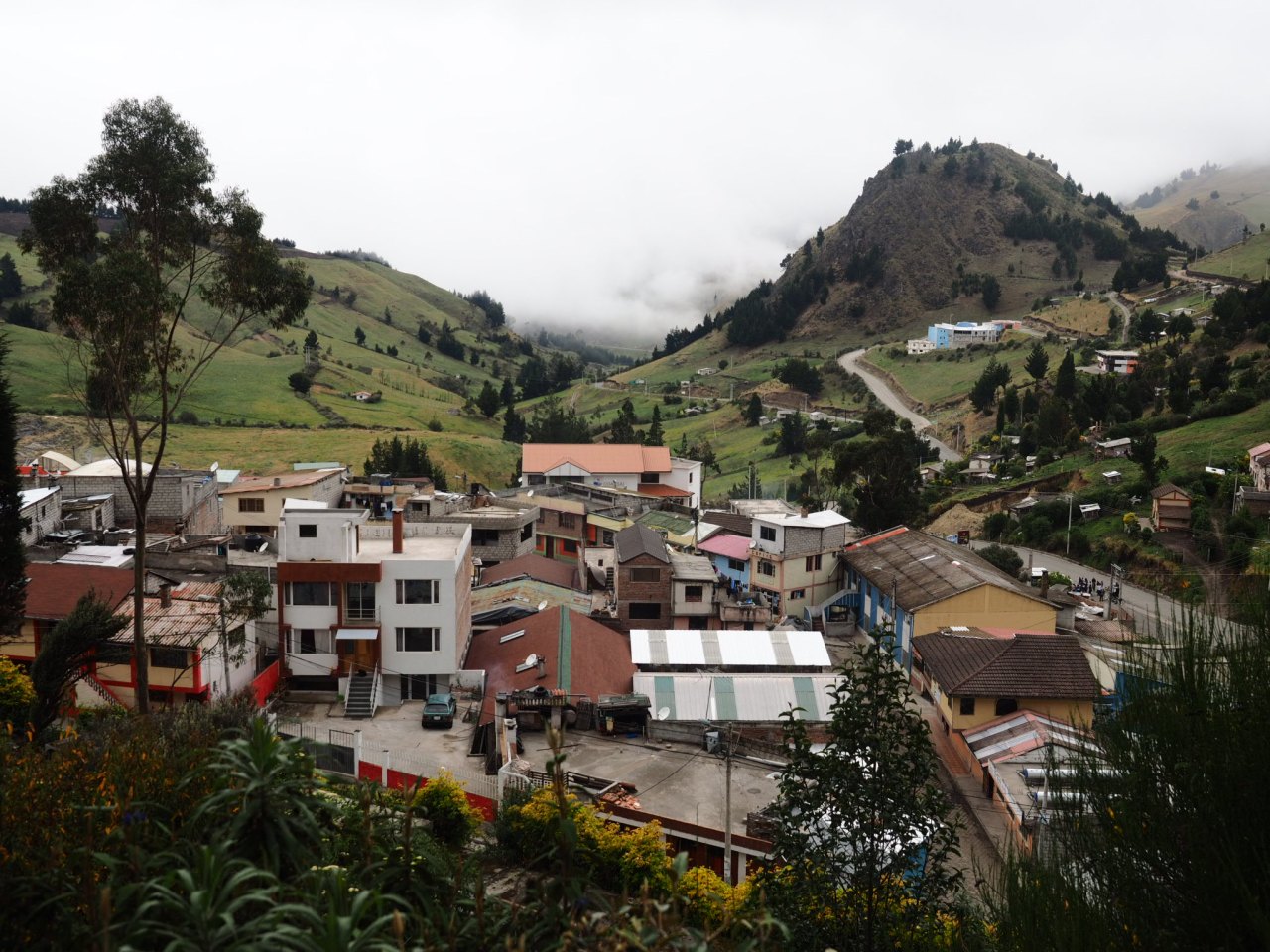 As the story goes, Father Polo saw potential in the area and he organized the locals, helping them receive the skills and support necessary to start up several community cooperatives. They started a cheese factory, using dairy brought in by local farmers. They started a chocolate factory. They started a wool factory. Salami, soccer balls, dried fruit, dried mushrooms – they are all manufactured in Salinas today by a multitude of community-owned businesses that use the brand name Salinerito to market and sell their products around Ecuador and beyond. The companies employ as many locals as possible and the profits go back into the community. 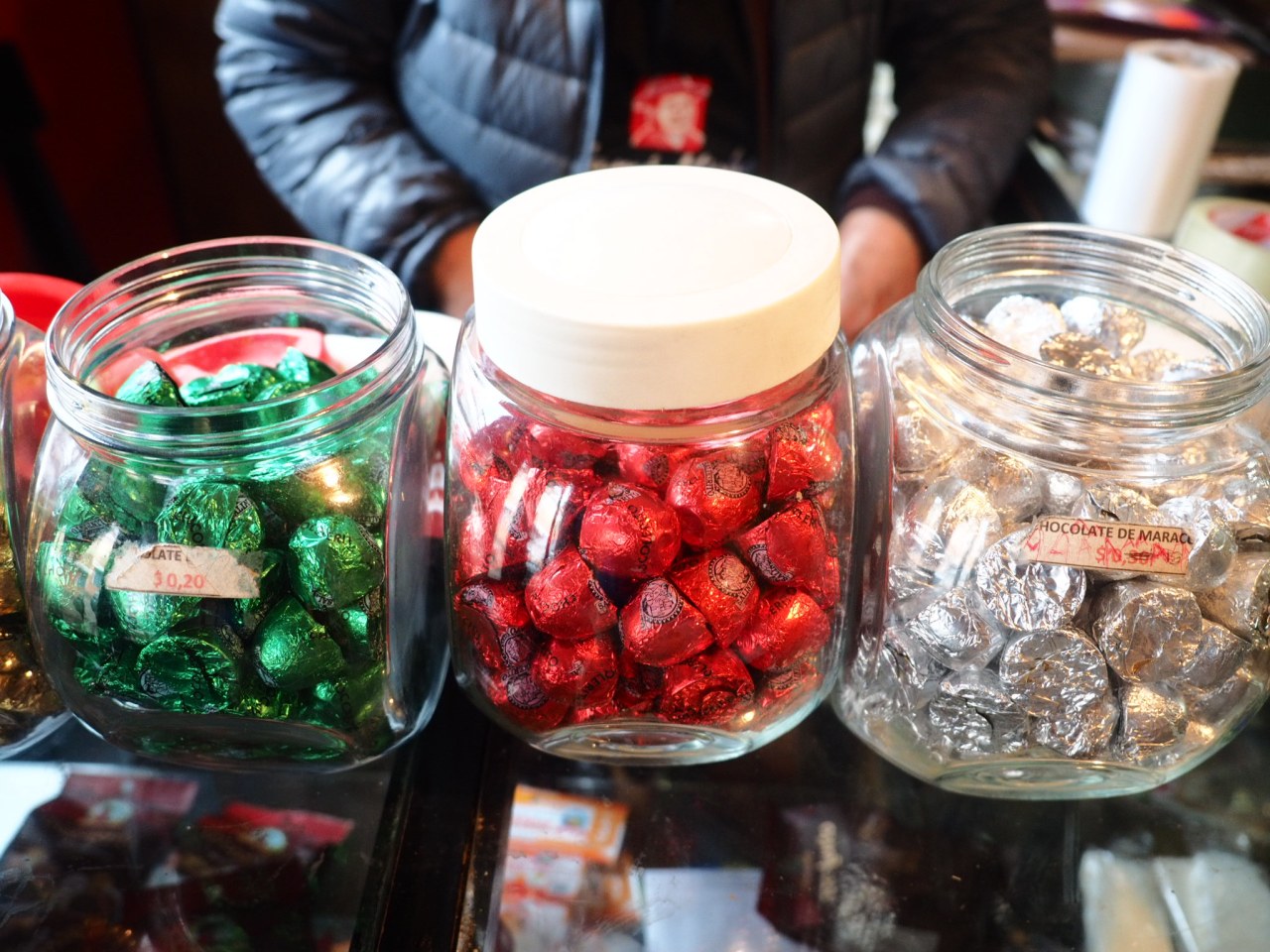 Salinas chocolates – I ate too many of these.

Salinas even has its own radio station.

The town is a remarkable and inspirational success story, and it’s where I found myself for a rest day after a grueling ride to get there. It’s a small town of about 1,000, with 10,000 more in the surrounding area. It has a few accommodations and several great pizza restaurants fitting of a town that’s home to a cheese factory. It’s located at about 3,500 metres, surrounded by green hillsides and small farms.

A mural in Salinas. 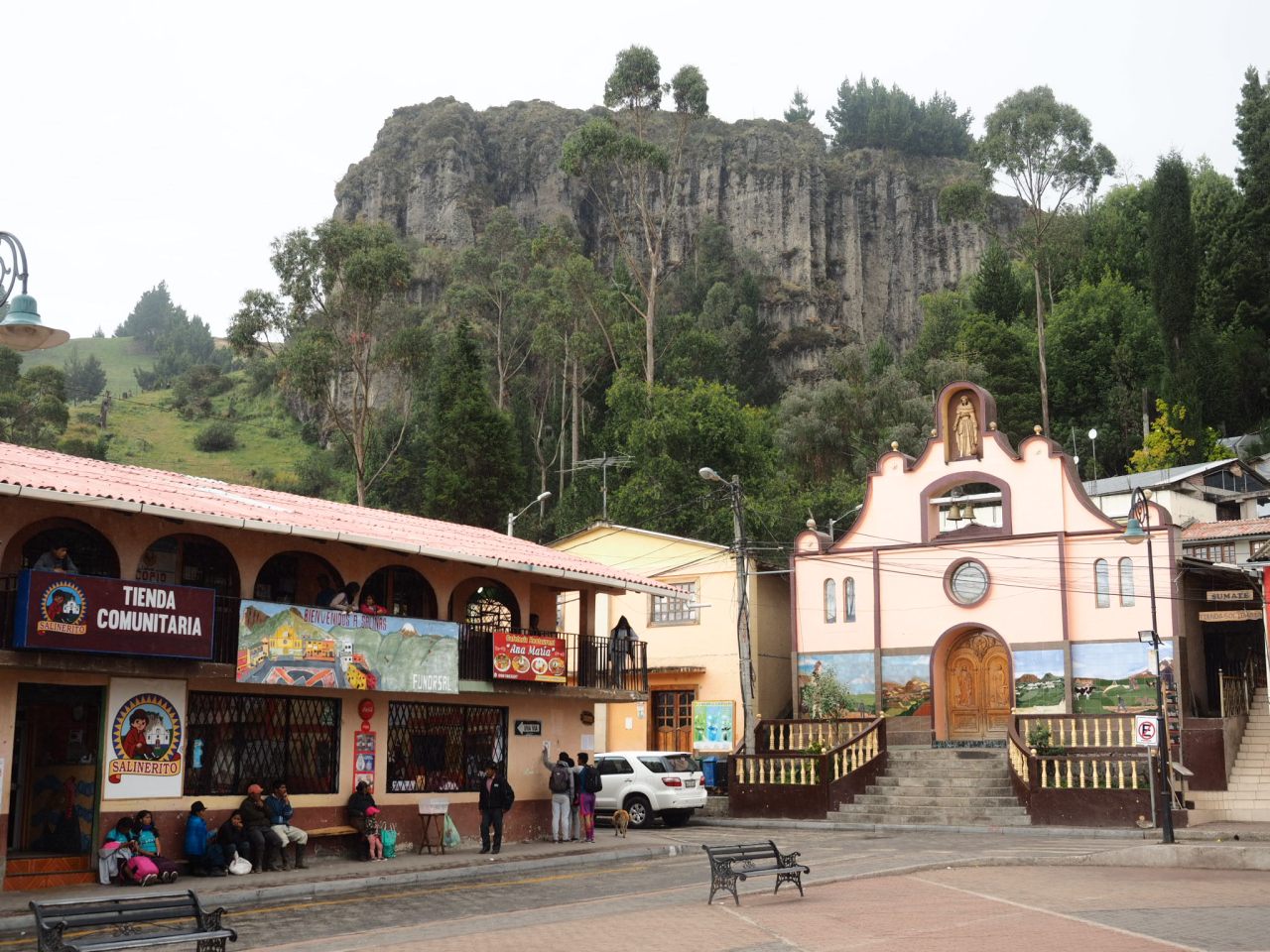 Locals would gather in the plaza for evening games of volleyball.

You can actually take a tour of the various cooperatives in town, but instead I enjoyed a lazy day at La Minga Hostal where I wrote two blog posts in between short walks around the town and up into the hills. On one of those walks, I met Father Polo, who still lives in the community. He was tending to a small botanical garden tucked next to a creek, beneath some cliffs. He invited me in for a coffee and we chatted in a mix of Spanish, French and English until the language barrier meant I ran out of things I could ask about. I ate too much chocolate and stocked up on cheese, mushrooms and salami for the road ahead. 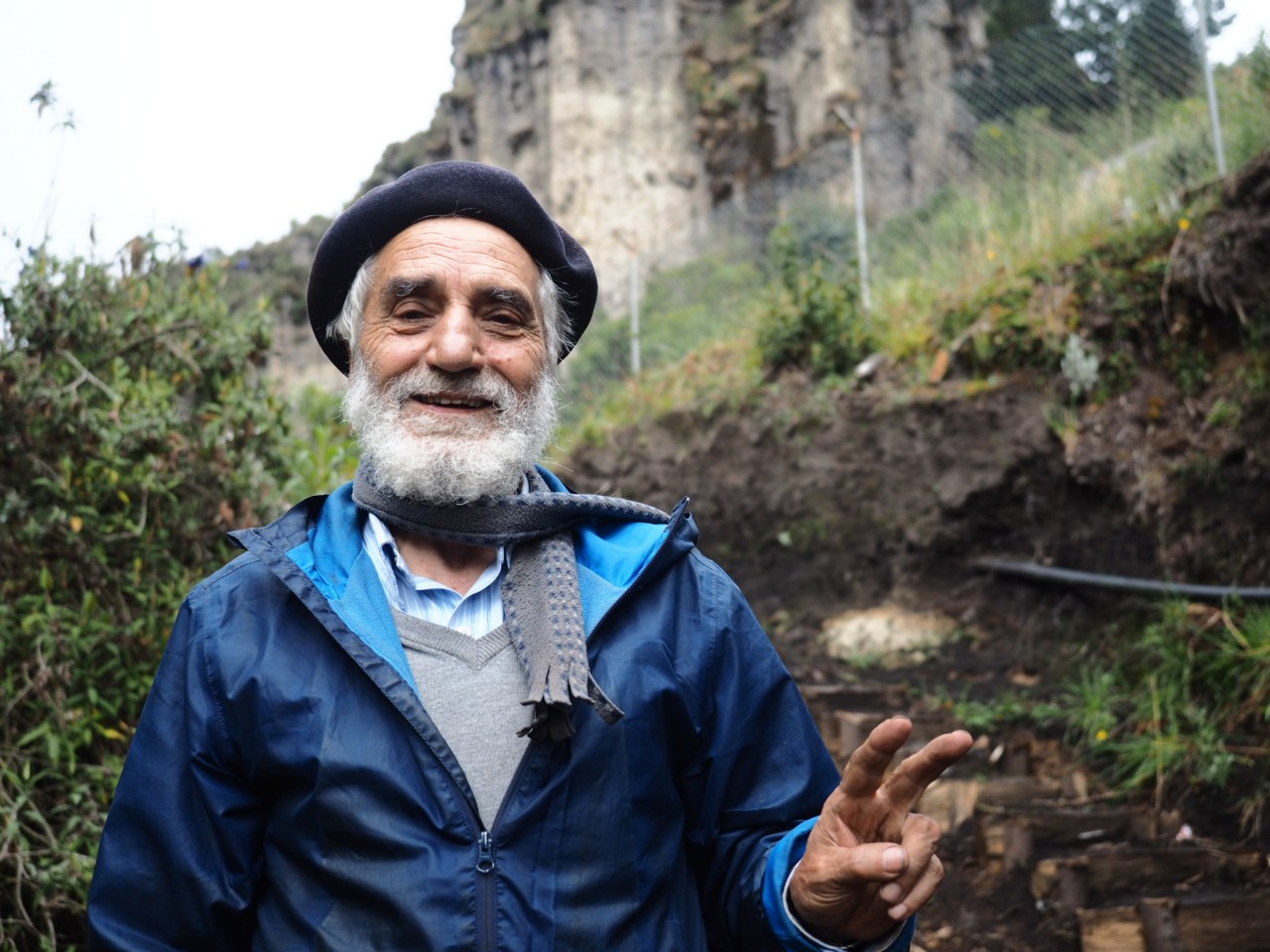 The only downside to the day was the weather, which continued to be gloomy and rainy. It was a pattern that would continue for the next few days and made me decide to head to Banos and get out of the mountains for a bit. But it would take two days of riding to get there.

Rested and with a handlebar bag full of chocolates, I left Salinas on a beautiful dirt road towards Chimborazo National Park. At 6,300 metres, Chimborazo is Ecuador’s highest mountain, and due to the bulge in the earth at the equator, the summit is the furthest point from the centre of the planet. Climbing it was on my list of things to do in South America (because why not?), but I could tell by the thick clouds and consistent rain that it wasn’t in the cards.

The ride into Chimborazo involved about 30 kilometres of climbing to more than 4,400 metres elevation. It wasn’t an easy day, but it wasn’t too difficult either, though my slow pace was emphasized by the local farmer who walked alongside me and pushed me up the steeper hills. I pedaled up a rough four-wheel drive road before hitting the main dirt road into the north end of the park. The final stretch was on a paved highway to the visitor centre, where I enjoyed a coca tea and warm empanada while waiting out the rain. I thought about heading up to the refugio a further eight kilometres and 500 metres higher, but with the weather being what it was, I decided to hunker down at the visitor centre instead. 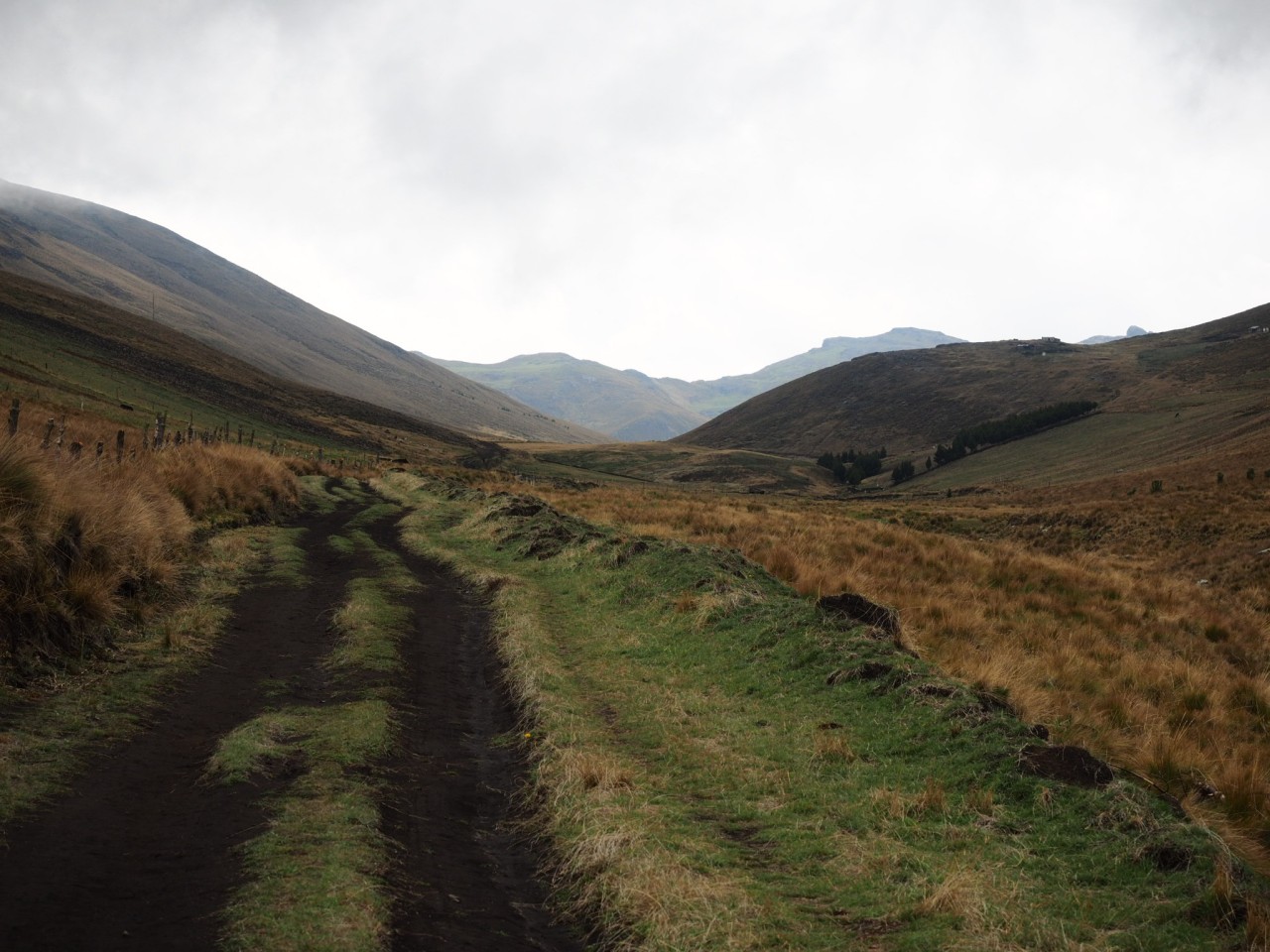 The road out of Salinas – the kind I love.

This is llama country.

Thick fog rolls through the fields.

There wasn’t much visibility on the way into Chimborazo National Park. 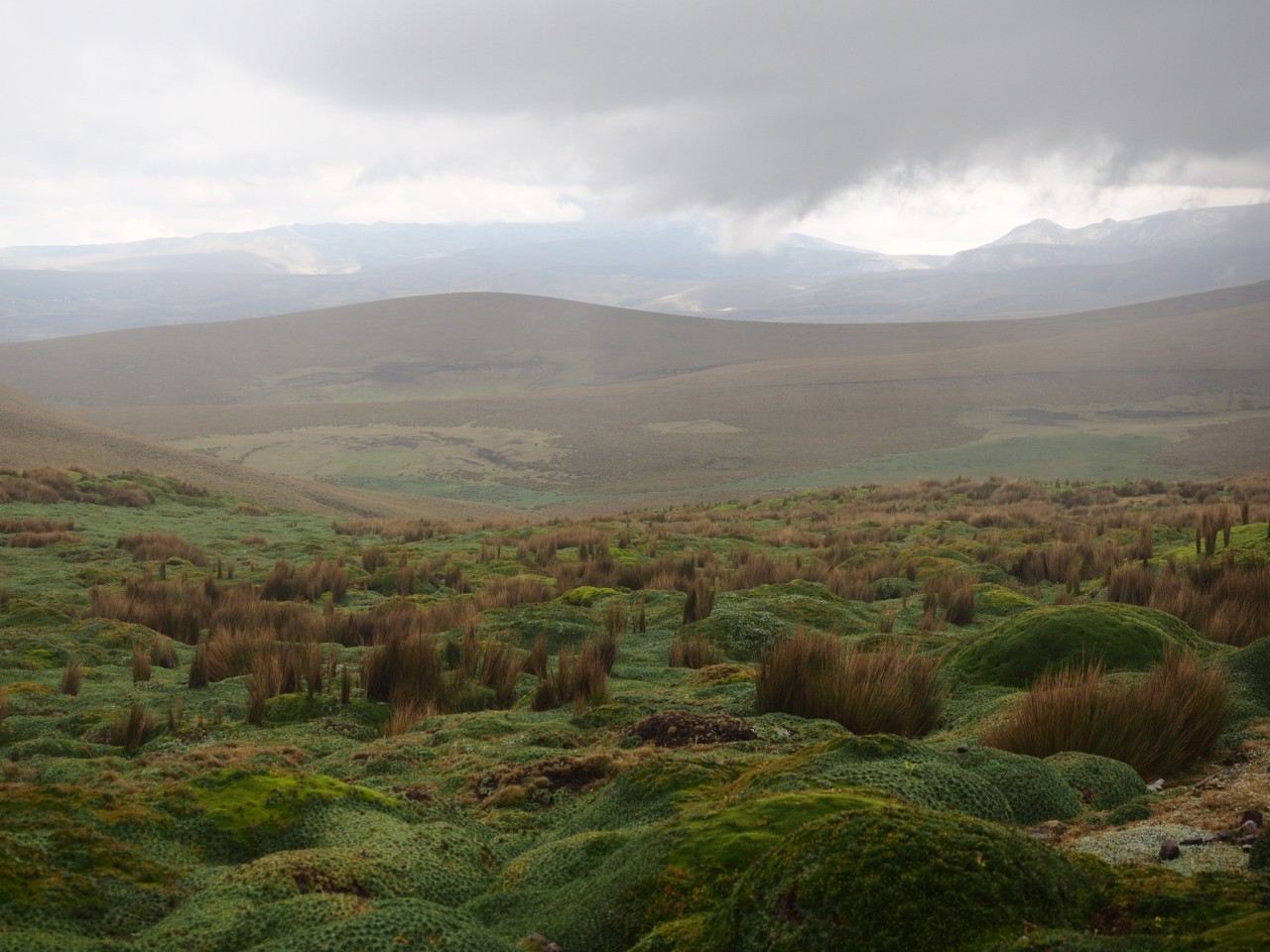 Fortunately the views opened up inside the national park. 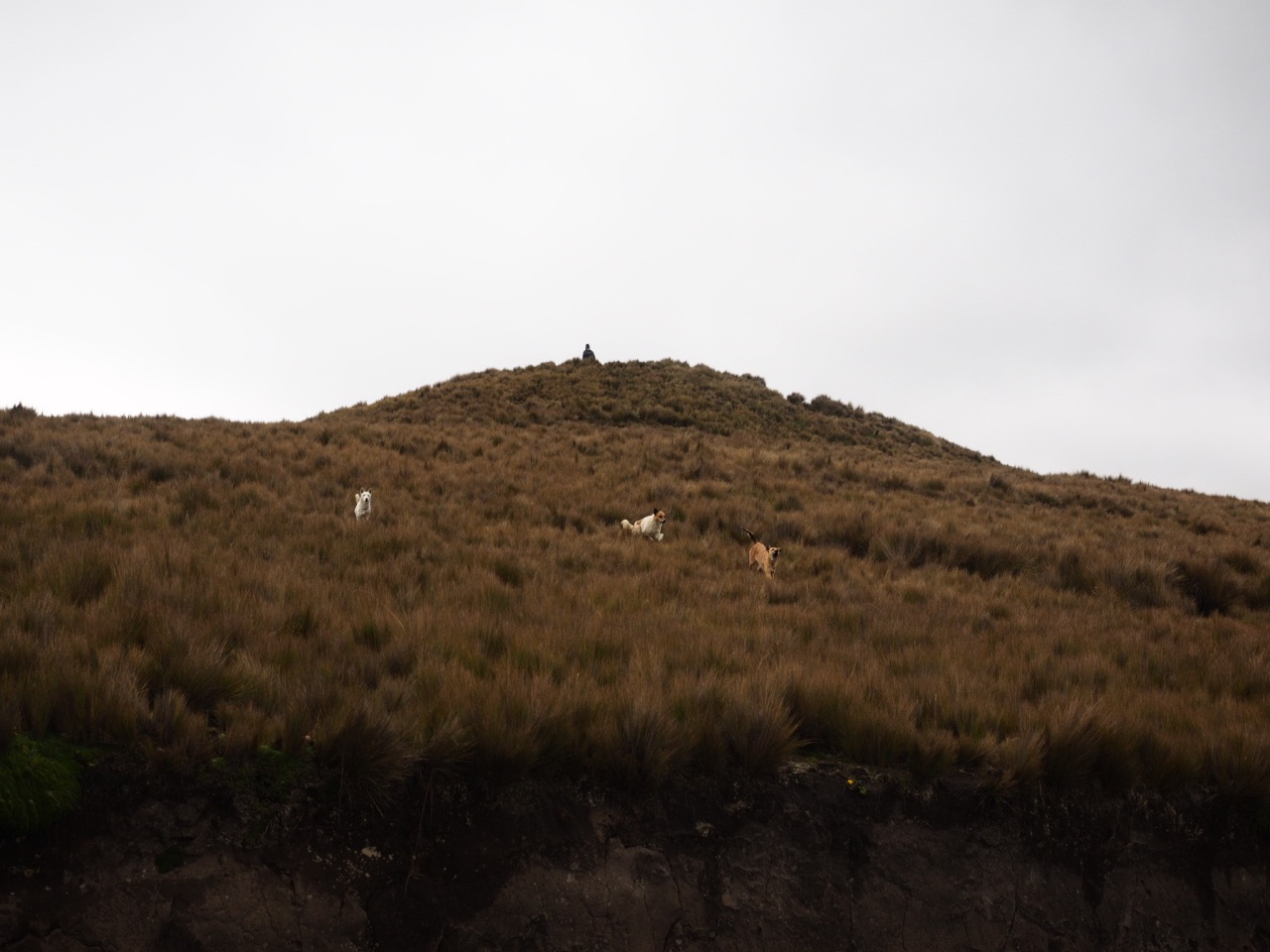 This pack of dogs came bounding after me but were stopped by the steep embankment.

Chimborazo shows itself below the clouds. 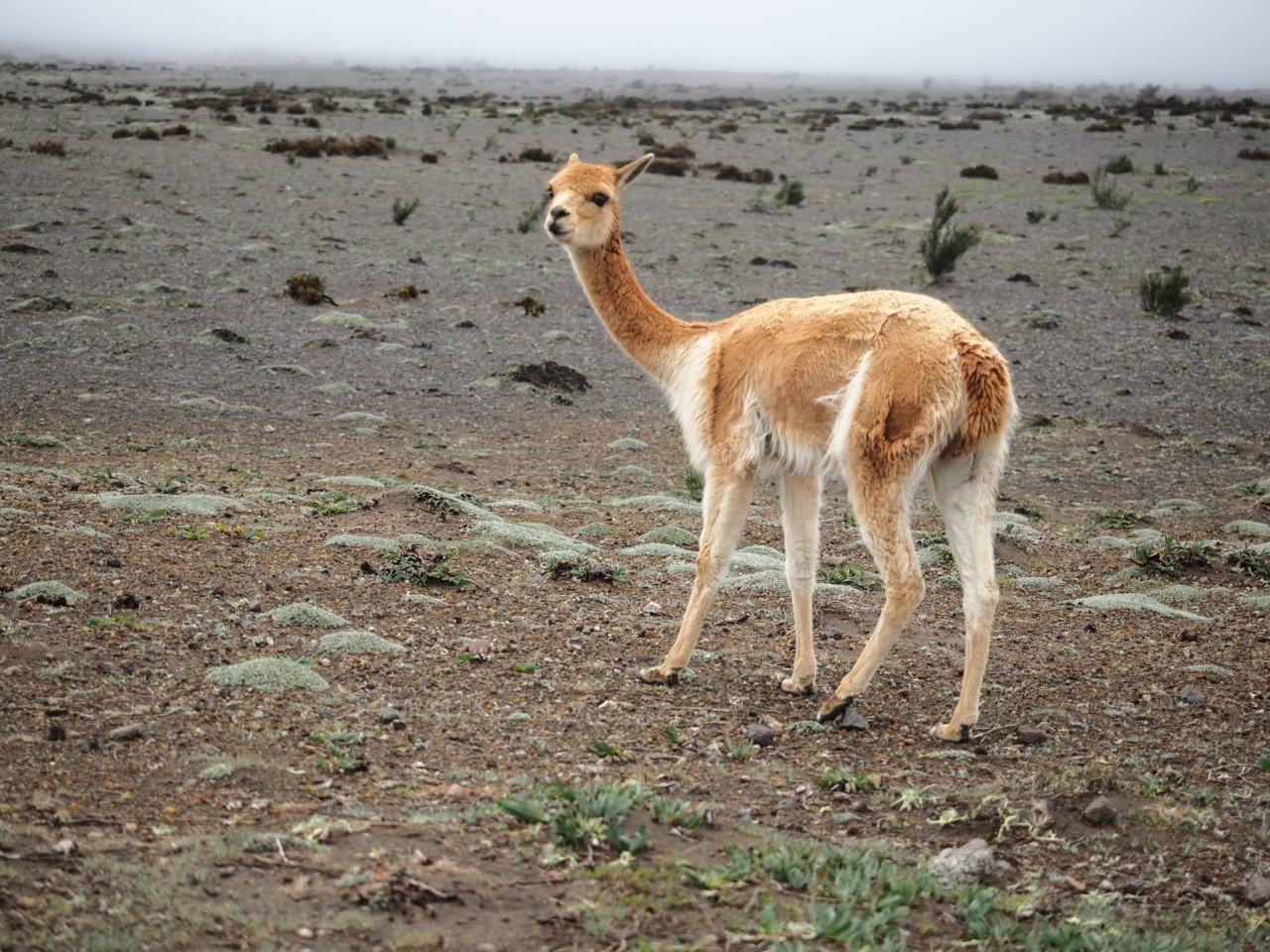 Wild vicunas lined the road. Most ran away when I got close, but this guy was less shy.

Vicunas are basically the Bambi’s of the Andes.

The park wardens were friendly and let me camp in a nice dry spot inside the entranceway to the visitor centre. As I prepared to start dinner, the rain stopped briefly and as I returned from the bathroom with water, the upper slopes of Chimborazo came into view. It wasn’t dark yet, so I grabbed my camera and went for a walk through the barren landscape, watching the wild vicunas and hoping the skies might part some more for an even better view of the volcano. Alas they wouldn’t. That night I ate a delicious meal of pasta, dried mushrooms, smoked pork, and cheese – all from Salinas except the pasta. It was the best camp meal I;ve had this trip. 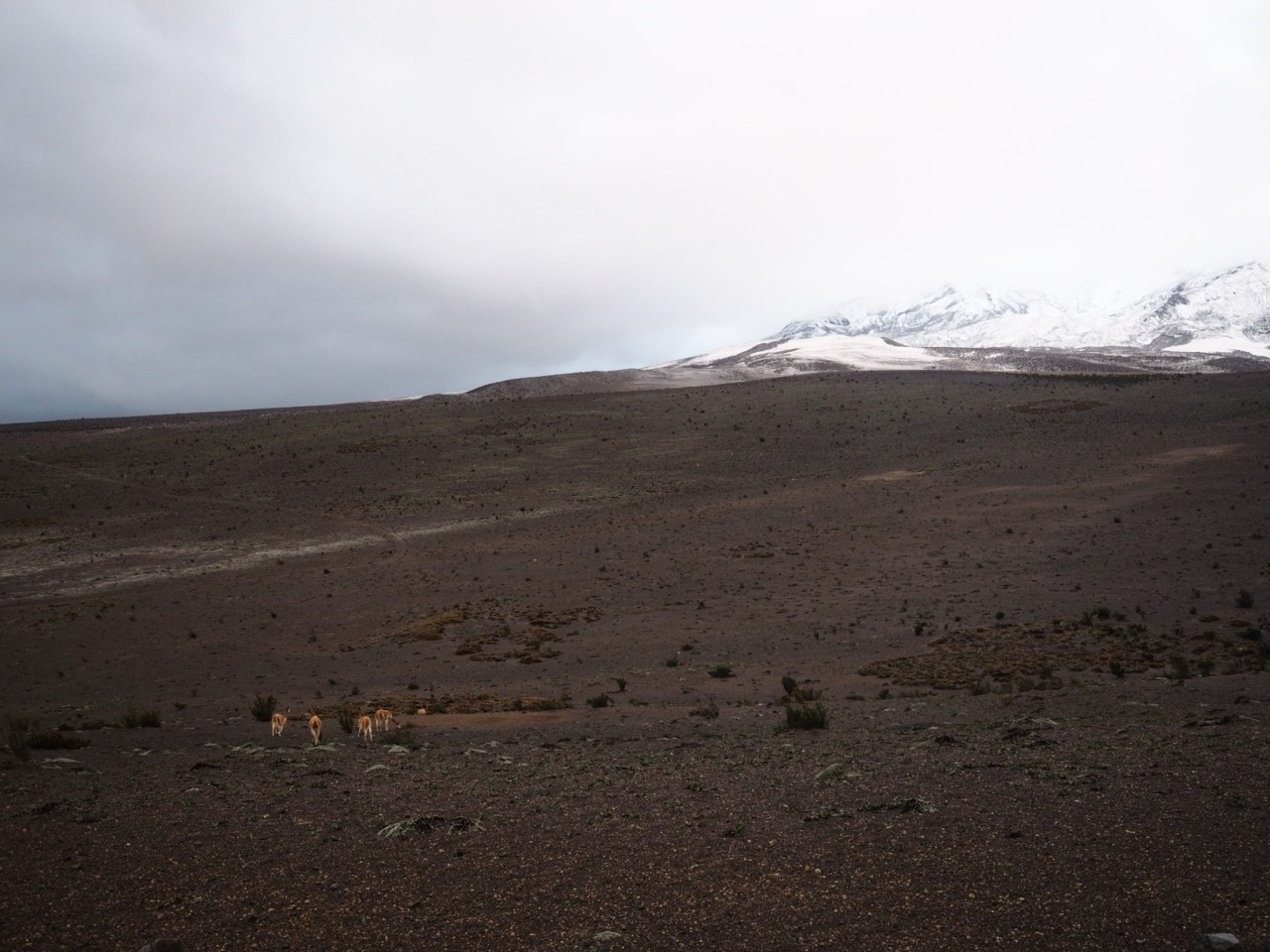 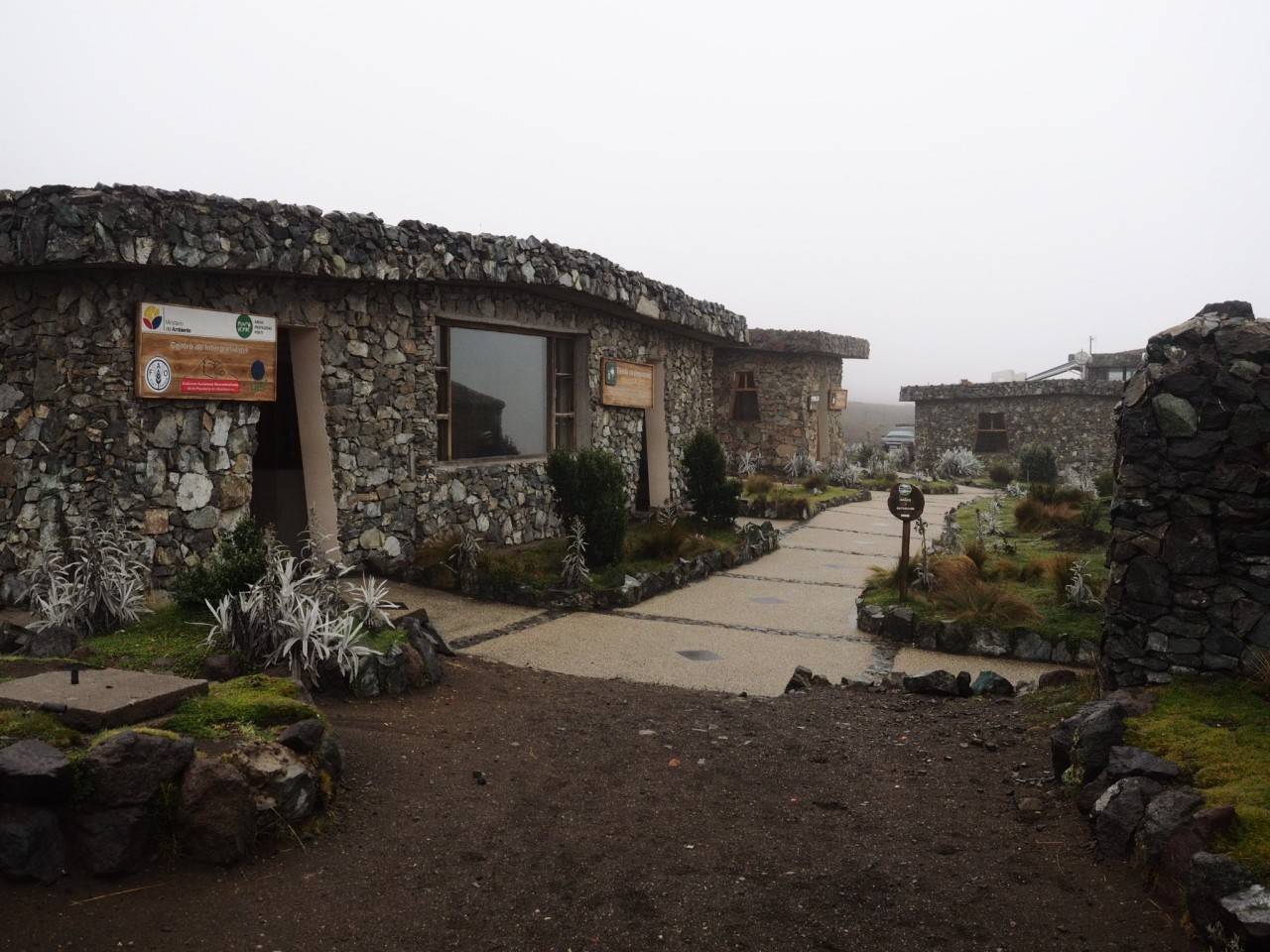 The Chimborazo visitor centre – my home for the night.

I slept surprisingly well that night – sleeping at altitude has been a struggle at times – but when I woke up the rain and fog returned and visibility was less than 100 metres. I packed up my bike but I didn’t rush up in the hopes I could get a ride up to the refugio and go for a hike before leaving. Alas, no one was going that way, so I hit the road.

The ride out of the visitor centre was cold, wet, and windy as I sped downhill on a paved highway. I missed my turnoff and ended up descending further than needed, which meant having to climb back up through rural farmland, where I received many quizzical looks from the locals. Eventually I got back on track and kept climbing until I reached the Pan-American Highway. From there, it was almost all downhill to Banos, perched in a valley beneath Volcan Tungurahua. I love paved downhills, where I can really let the bike fly, but this road had lots of traffic and not much of a shoulder, so it was fairly nerve wracking. In all, I descended to 1,800 metres from 4,400 metres. Add in more than a 1,000 metres of climbing, and there was a lot of coasting on the day and I barely stopped to take pictures.

A rural train station on the way to Banos.

Banos is the self-proclaimed adventure capital of Ecuador and it’s where backpackers and Quitenos flock by the thousands to go rafting, mountain biking, canyoning, bungee jumping, ziplining, dirt biking, paragliding and more. And, of course, they go to the thermal baths, which I missed. I have mixed-feelings about these tourist towns because in one way it is nice to meet other travelers and socialize in English after lonely days on the road, but at the same time, I find the whole experience a little off-putting. And when you’re traveling in the mountains by bike, some of those activities just don’t seem as thrilling. On the plus side, it does mean there’s a plethora of good restaurants to try.

The view of Banos.

Banos is along the Ruta des Cascadas, and there are indeed waterfalls everywhere, including one that plummets right into town. 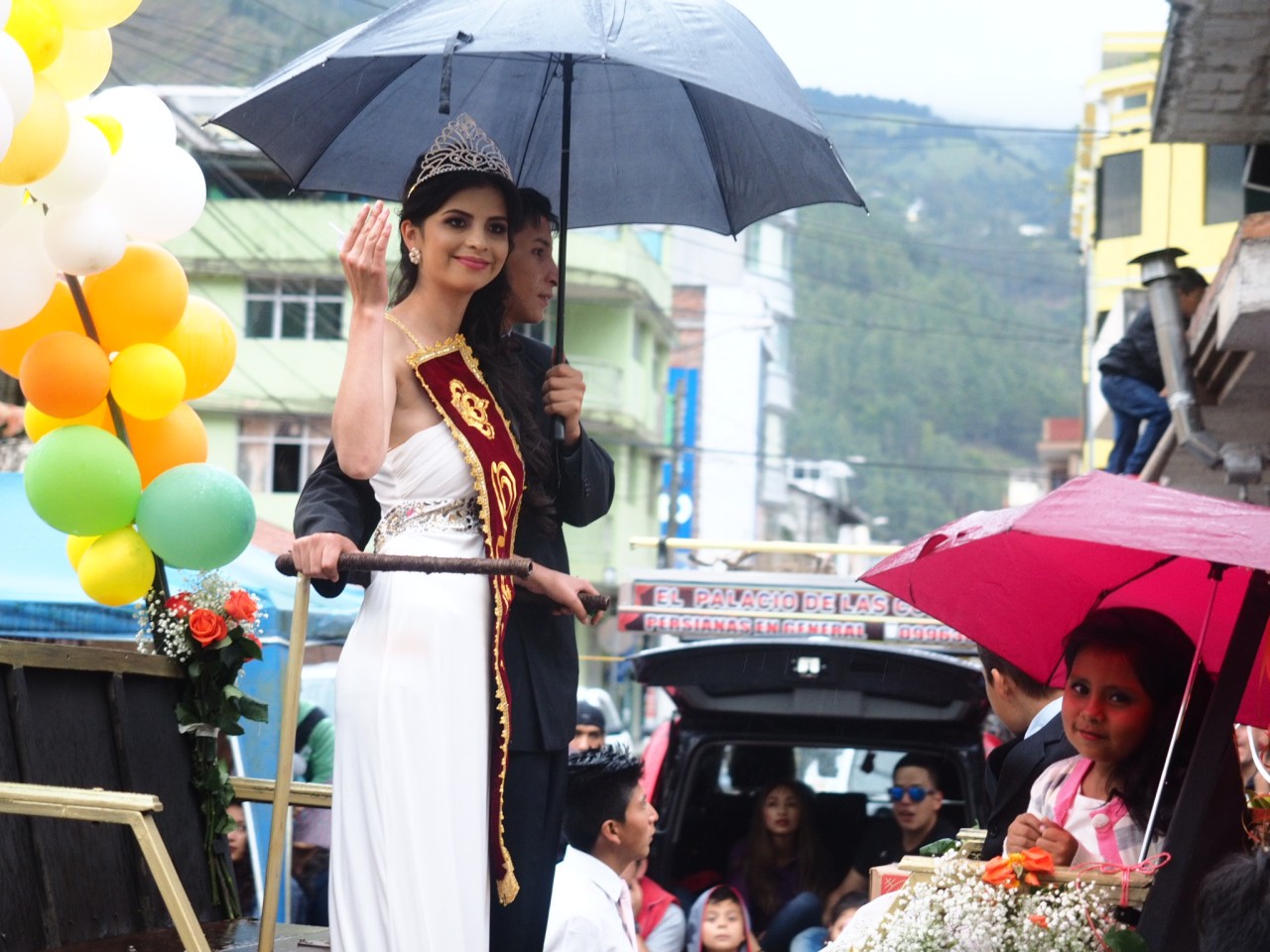 Banos is the third town I’ve shown up in on parade day. 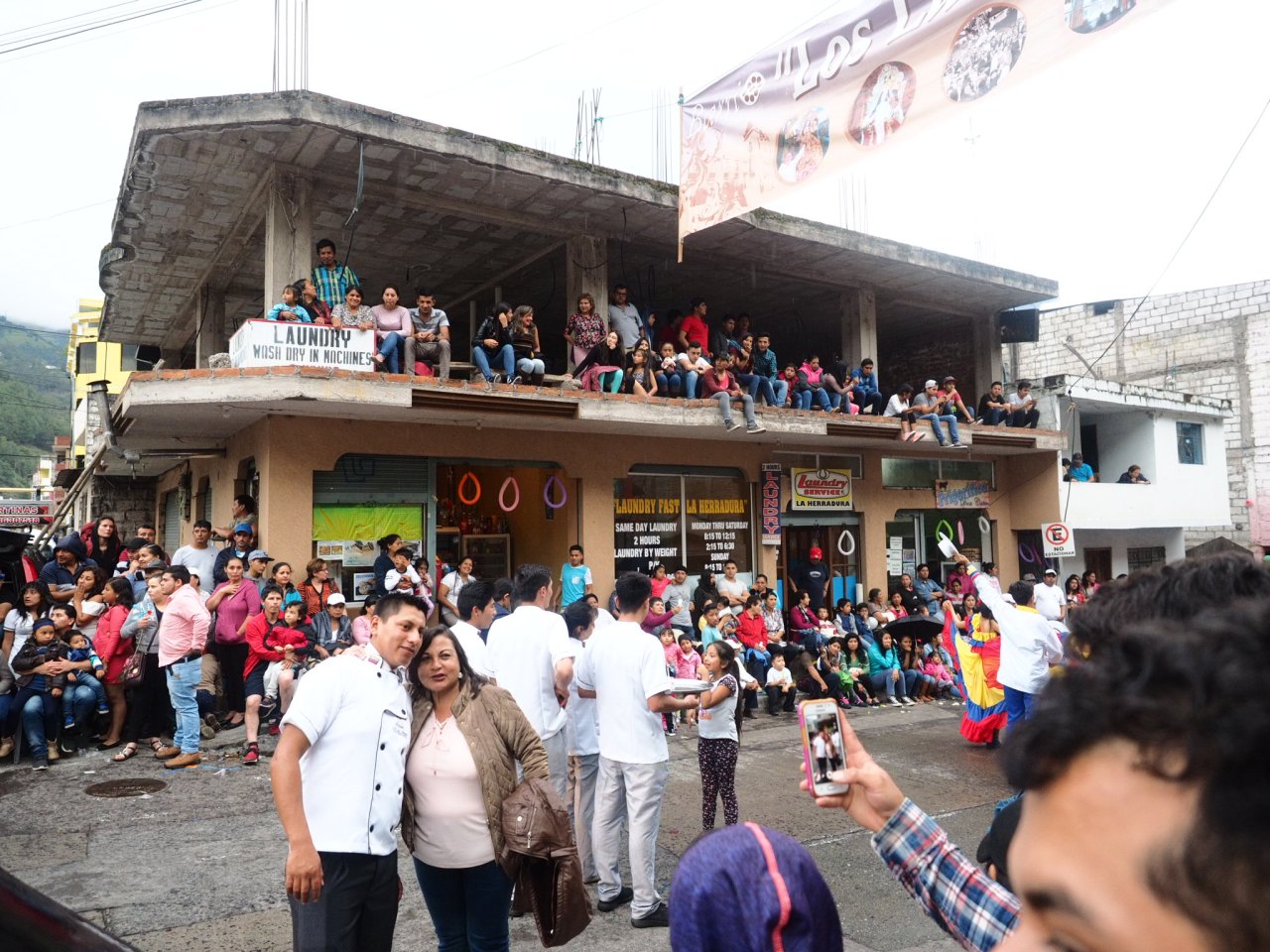 I never did find out what the parade was for, but the streets were packed.

Dancers in the parade.

There was a downhill mountain bike race going on while I was in Banos, but I managed to miss all the action.

I spent two days in Banos. The day I showed up there was a big parade happening in town. On day one, I went up to the famous swing above town for the view and a photo-op. On day two I went canyoning, which involved rapelling down a series of waterfalls. I thought about doing more, but I wasn’t feeling the whole vibe of the place. I did like the fact there was a great variety of restaurants, and I did meet a cool mountain biking and kayaking British techie named Harry, but after two days, I just wanted to get back on the bike. I had plotted out a route that would take me to the edge of the Amazon, along a series of dirt roads. I knew this wouldn’t be the “true” Amazon, but I was eager to mix it up after months of riding through the mountains. I was looking forward to less climbing and, strangely enough, some heat. But more on that next week.

You can view the GPS track for this route here: https://ridewithgps.com/routes/26717057

The swing at Casa del Arbol.

The swing at Casa del Arbol.

Esteban, Zoe and I, at a lookout above Banos.

Just chillin’ before the first drop. 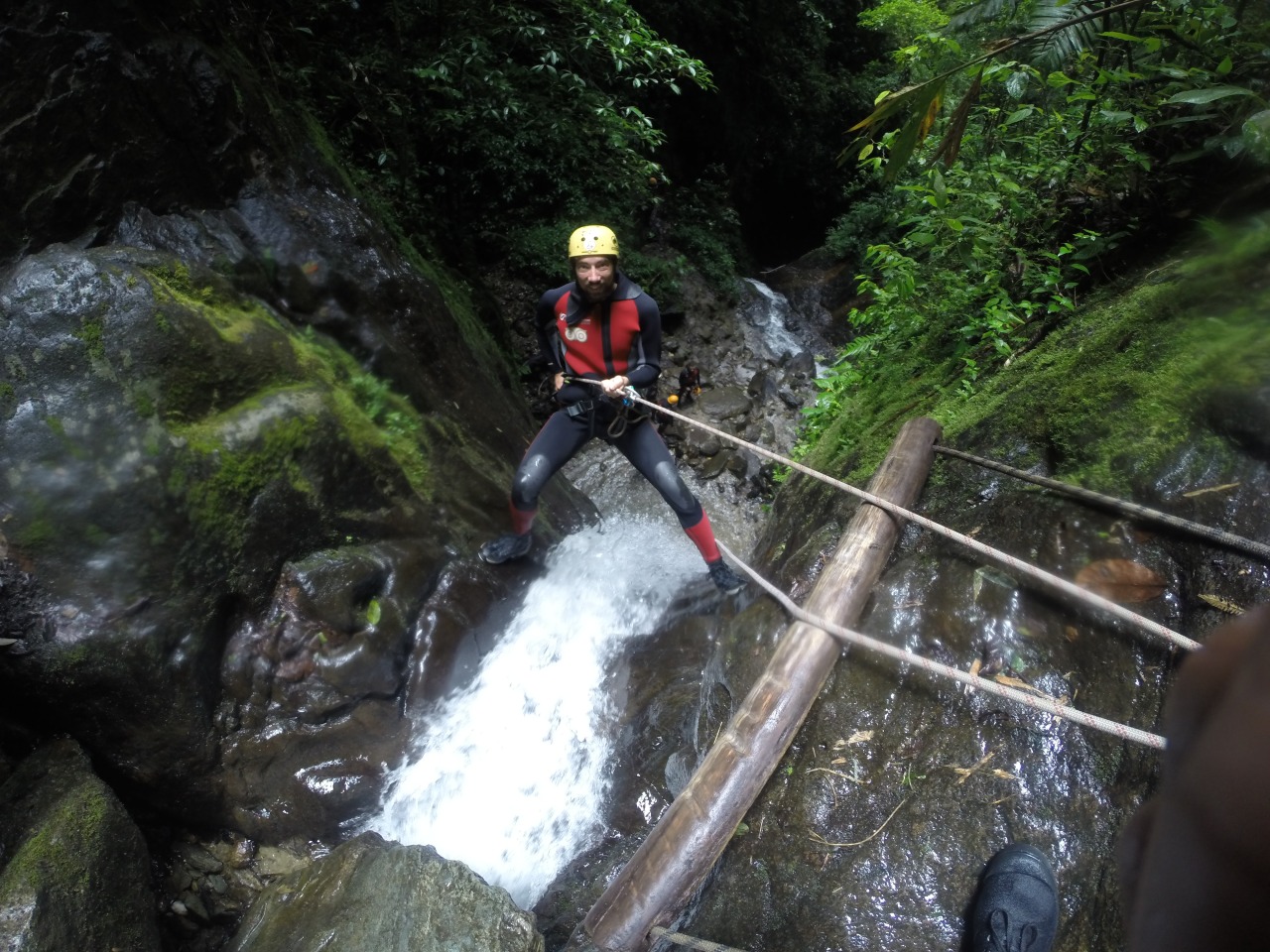