After several days straight of cold, gloomy and wet weather, I was starting to feel a little grim. I knew it was rainy season, but up until this point, I’d been lucky with the weather. But after lots of climbing and little views from Quilotoa to Chimborazo, I decided to follow through on an idea and ride along the edge of the Amazon jungle, from the adventure-tourism town of Banos to Mendez and then up to Cuenca.

The road east out of Banos is one of its attractions, and everywhere in town rents bikes so tourists can coast downhill, stopping to gawk at the various waterfalls along the way. I was told about one spot where you could take a zipline across the valley and over two waterfalls, but the only stop I made was at the thundering Pailon del Diablo. I’m a little skeptical of waterfalls – let’s face it, most are pretty much the same – but this one was definitely impressive as it roared down. I coasted downhill, locked up my bike and hiked down to the base of the falls, then followed a trail that almost took me right under the fall, and got me very wet. 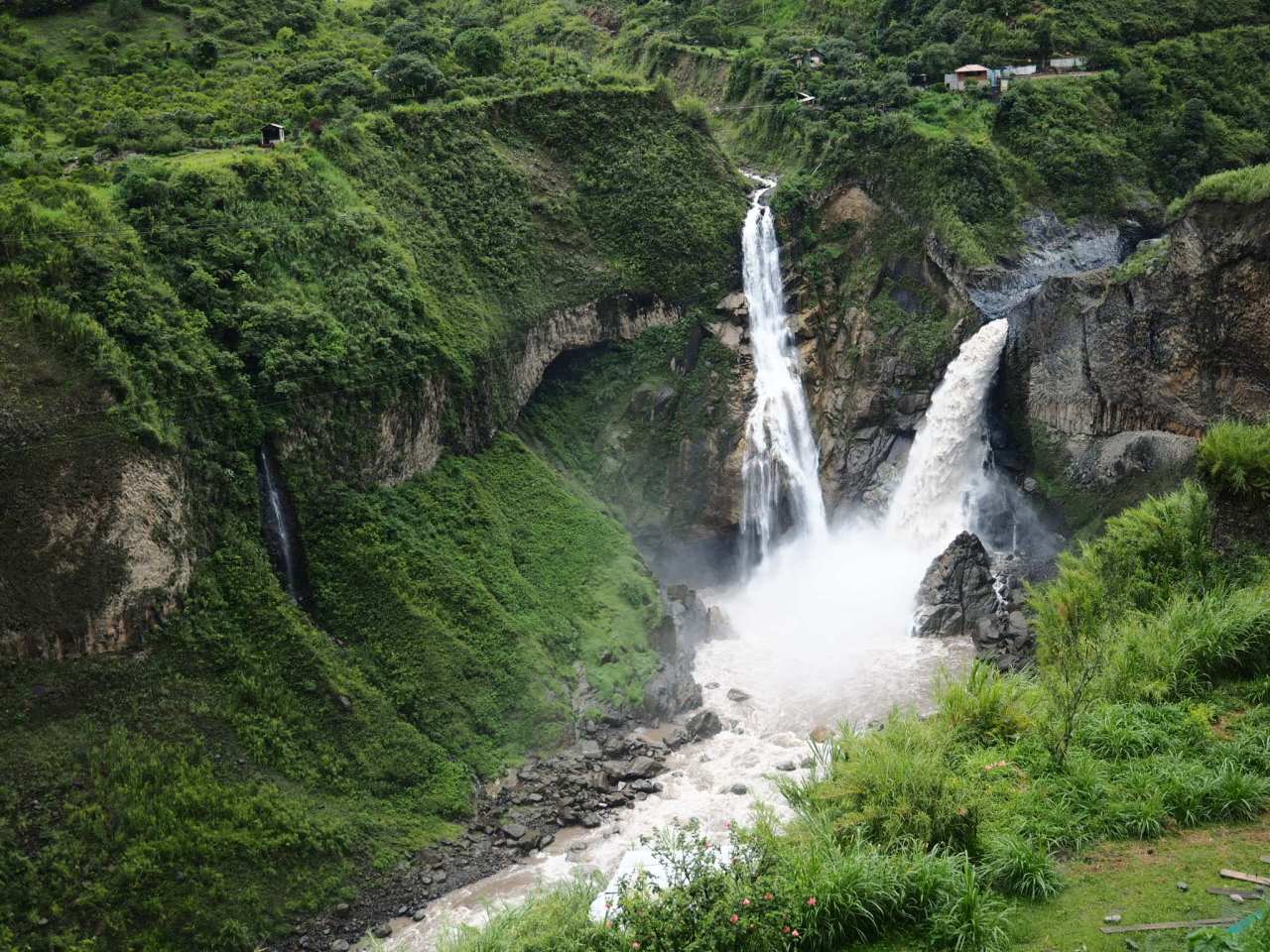 One pair of waterfalls along the Ruta des Cascadas.

The Pastaza River flows out of the mountains into the jungle. 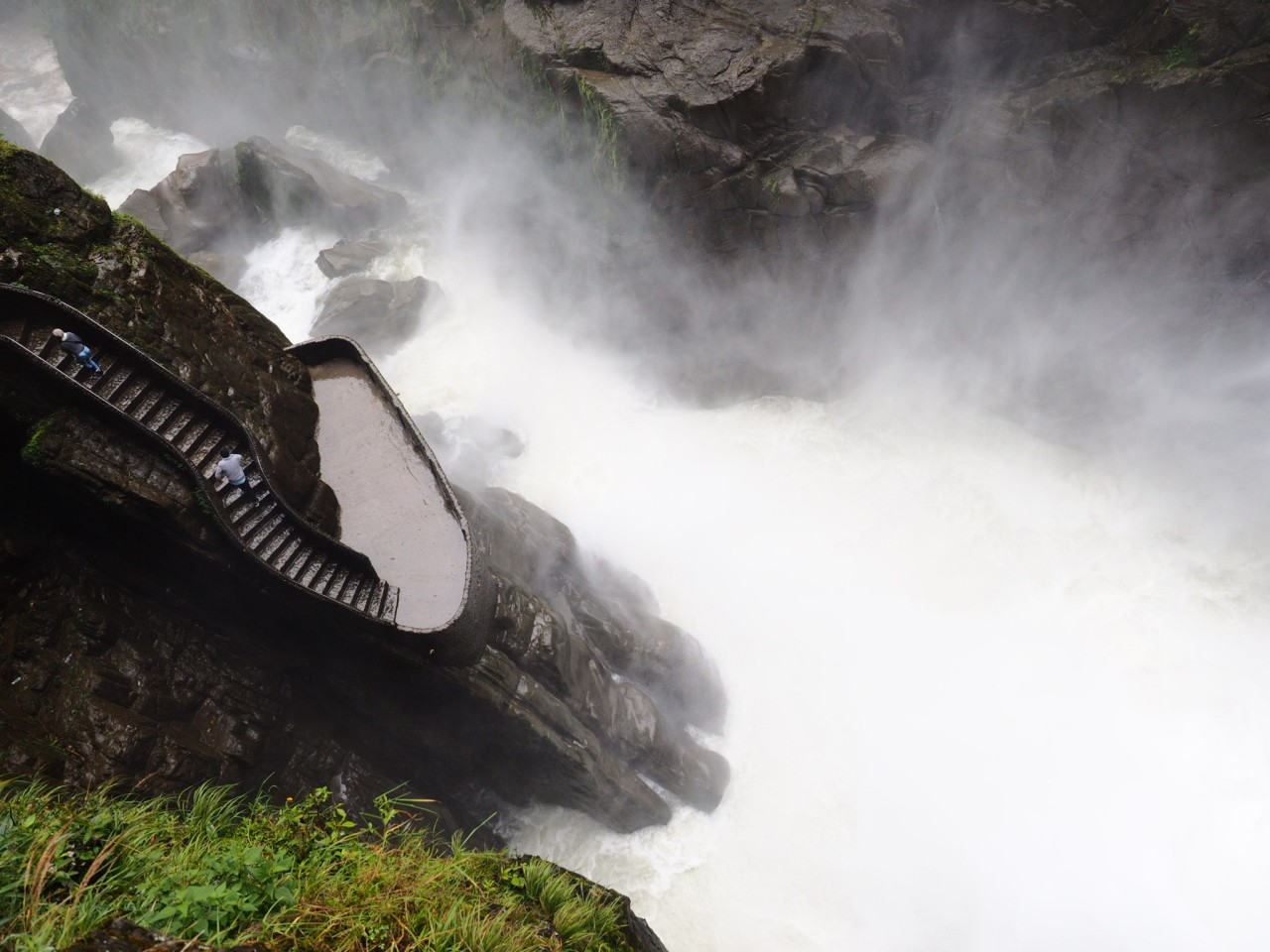 After the waterfall, I jumped back on my bike and continued to coast down the road, keeping one eye on the pavement and another on the Pastaza River that snaked through the canyon below. I had plotted out a dirt road route, so I turned off the highway just before the town of Mera, crossing the river on the first of several rickety wooden bridges I would encounter over the next few days.

The road took me through small villages, logging clearcuts, and farms and over numerous creeks and rivers. I had to ford one river that was lacking a bridge, but the cool water was a relief in the jungle heat. I found a nice wild campsite by a river, only to discover that neither of my lighters worked. Fortunately, I had a good supply of snacks and I wasn’t far from the next town, so I devoured those before hitting the hay. 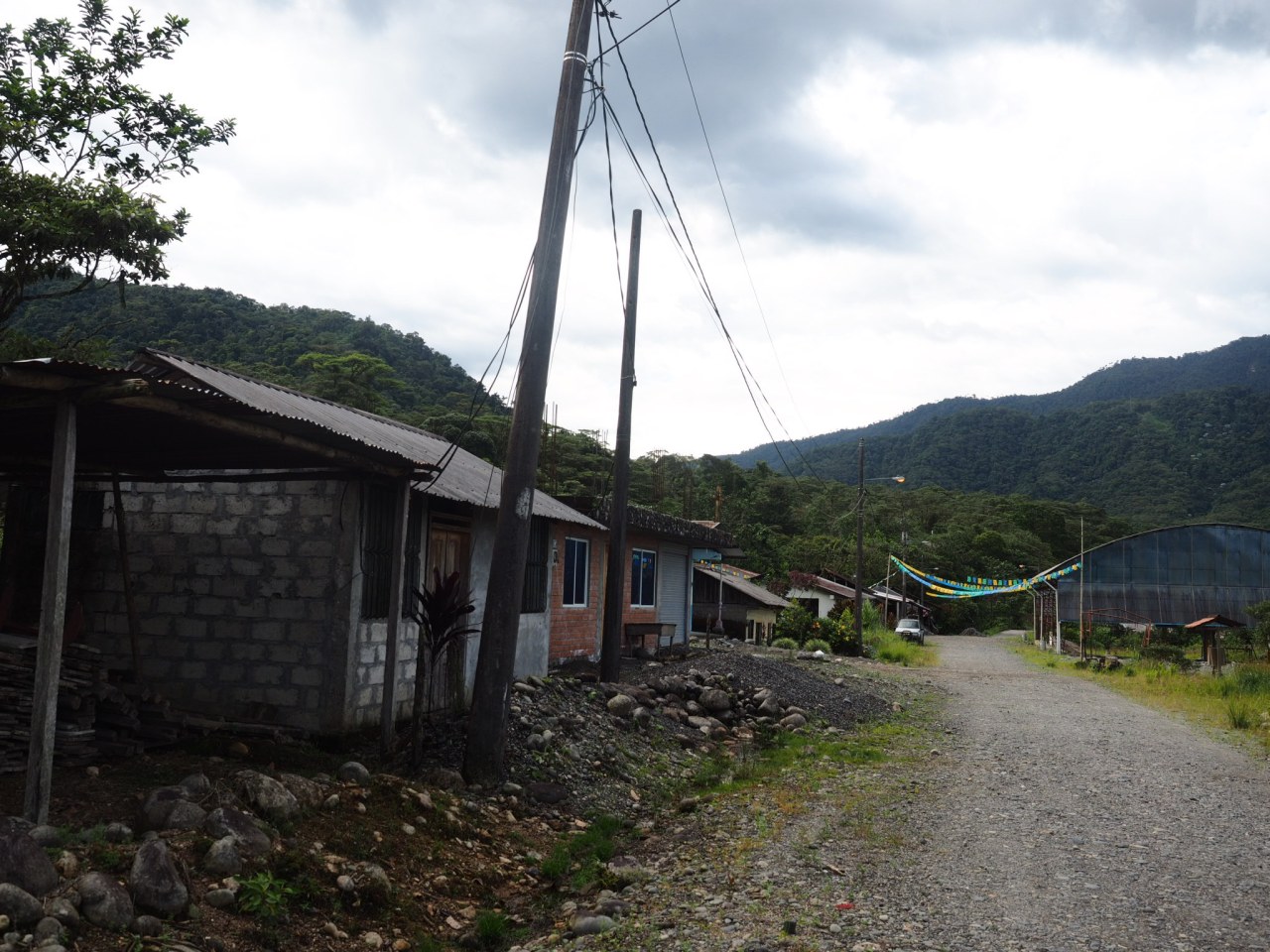 The village of Cayambe. 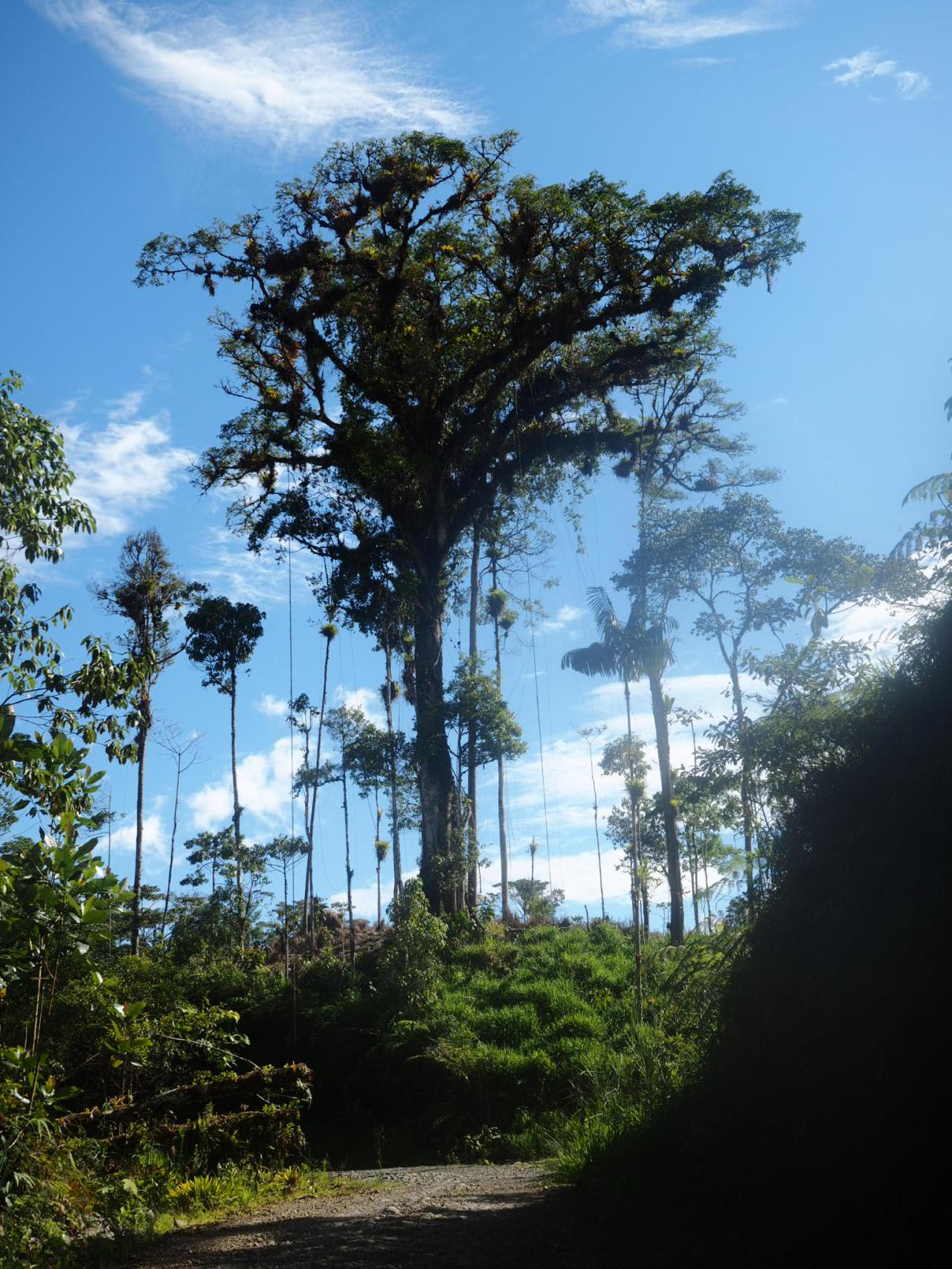 Most homes were perched on stilts to keep the water out.

Leaf-cutter ants were all over the road.

Clear-cuts abound through these parts. Most of the rain forest in this region is second growth.

The Andes beckon in the distance.

The next morning I cruised into Palora for breakfast. Along the way I met a Warmshowers host who was expecting some other bike tourers to show up – it hadn’t even occurred to me to check if there was one in that area, and if I had, I could have pushed on to his place without too much trouble. It was too bad, because his home was right across from a rural park that straddled a river. He told me he was expecting two Americans and two Quebeckers and asked if I’d seen them, but I said it had been a while since I saw any other bike tourers.

From Palora, the road was mostly flat until Arapicos, where I crossed a wide river on an old cable car. It was tricky getting on and off as my bike through the thing off balance, but once steady, I flew across the river, enjoying the views up and down the river – it definitely added character to the route. After that, I continued along dirt roads, past tiny settlements that would consist of little more than a few houses, a soccer field, school and possibly a church. I had lunch in Pablo Sexto, after which the road was either paved, or being paved, until I was back on the main highway that links Puyo to Macas. 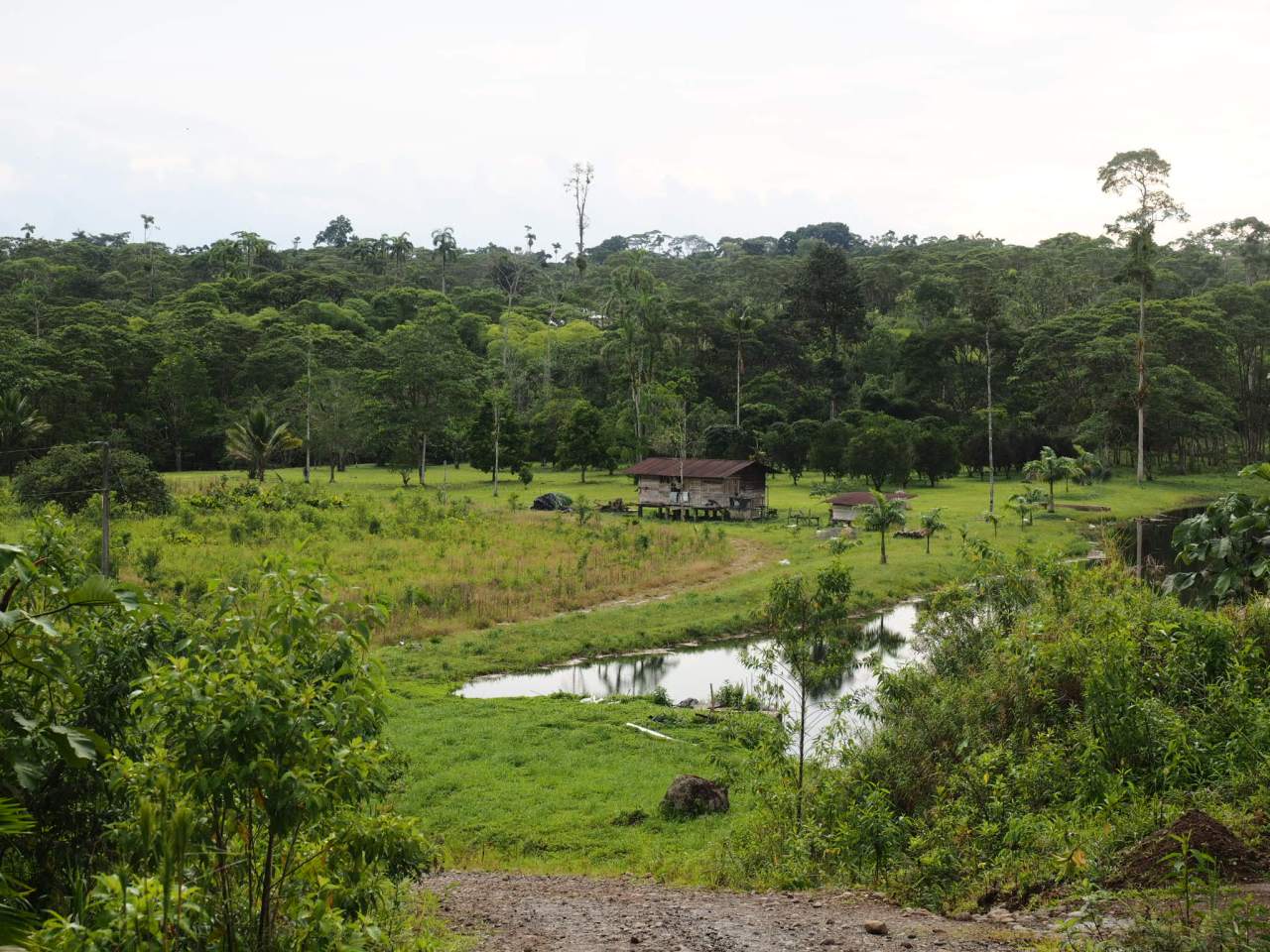 This part of the jungle has been taken over for agriculture.

The pithaya fruit was a common crop along the road.

One big river, but no bridge.

Approaching the other side of the river. 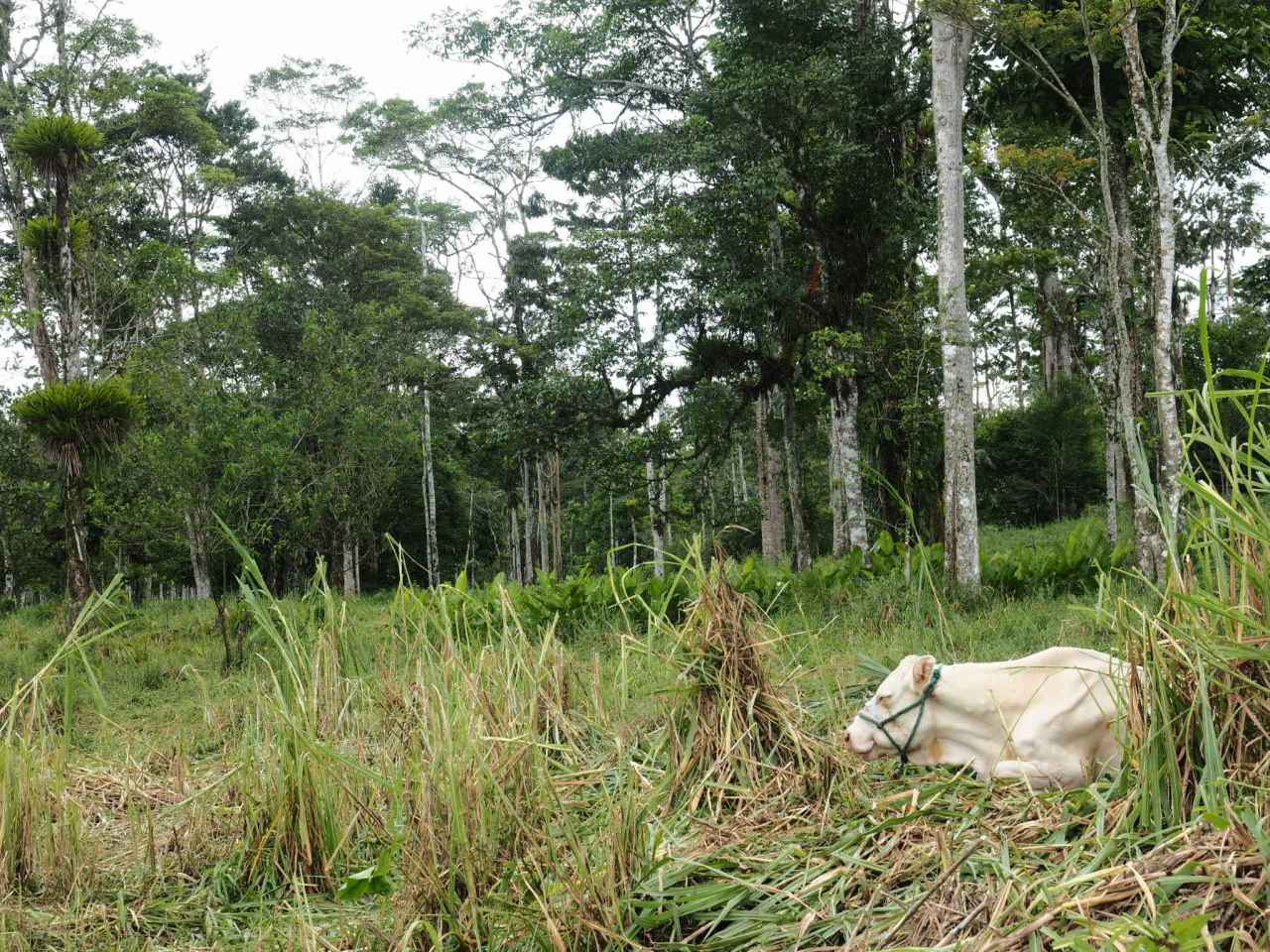 A cow lazes about in the heat. 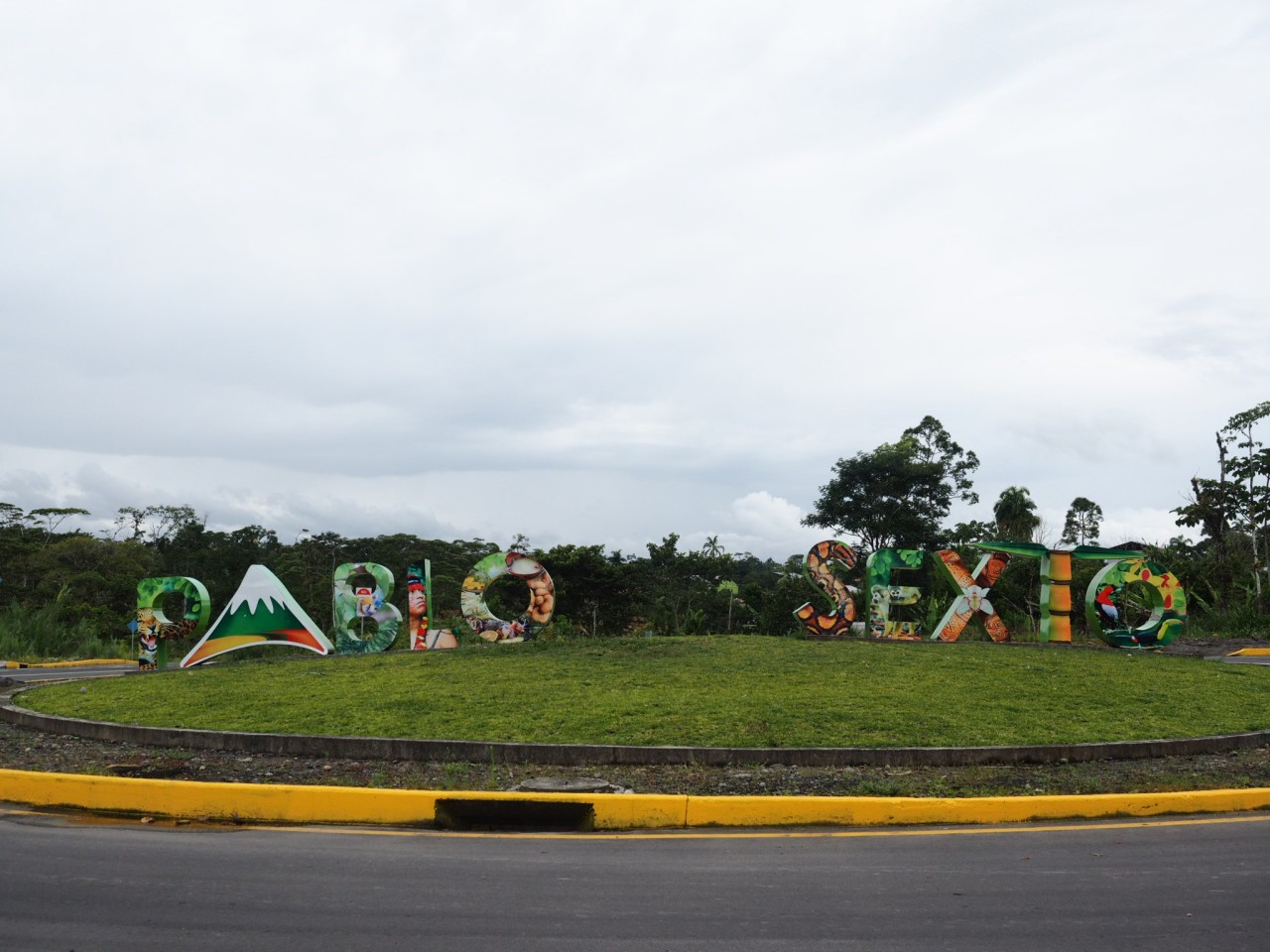 Welcome to Pablo Sexto, my lunch stop for the day.. 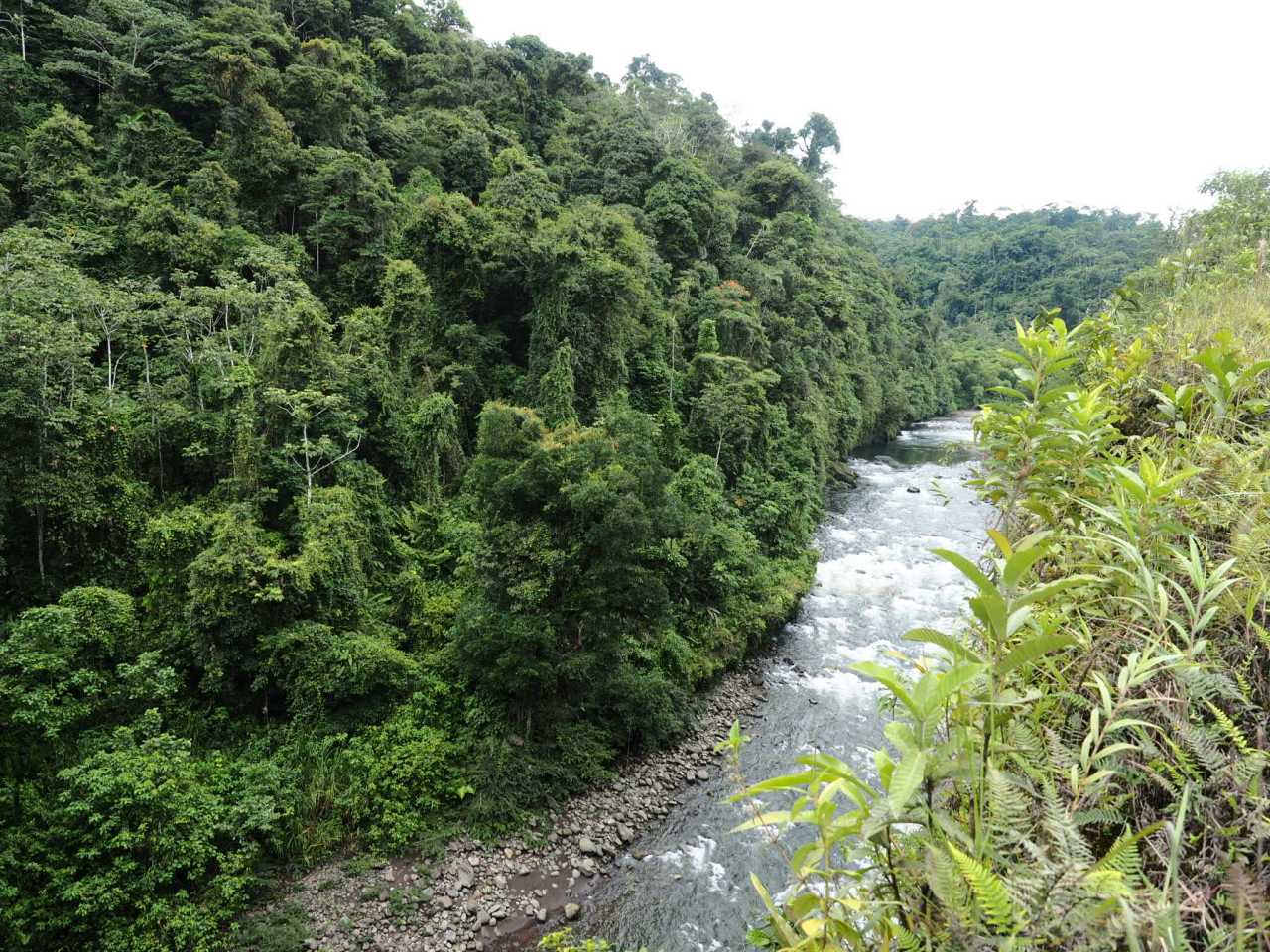 Crossing yet another river, this time by bridge.

I rolled up and down the highway until I turned off it once again, aiming for a spot on the map called Playa San Luis. I envisioned camping at a nice beach along the Upano River; I ended up pitching my tent at the end of spur road next to the river, where a few machete-wielding locals popped by to say hi. And before anyone freaks out, know that machetes are common tools around here and you pass dozens of people carrying them every day. But it still was a little nerve wracking, knowing I was all alone, down a remote dirt road, and I hadn’t told anyone where I was going. 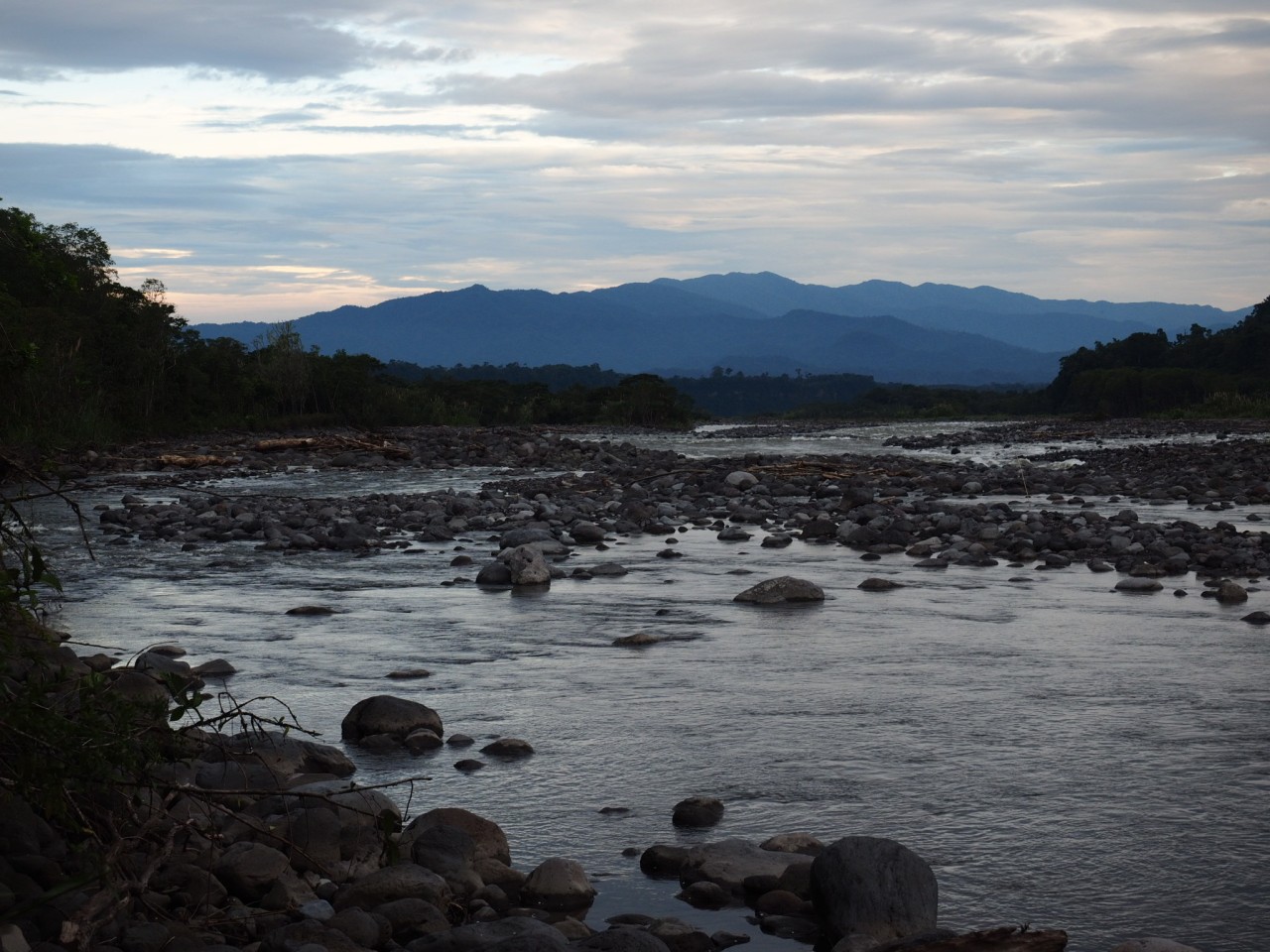 The view from my campsite.

The Upano River cascaded from one pool to another across from my campsite.

The next morning I rode back to the main highway and cruised into Macas, a small city of about 20,000 people perched on a ridge above the river. I had a snack break in a very quaint park with great river views, hit up the local bakeries, and found some free internet so I could send a message to my parents letting them know where I was just in case I ran into some less friendly machete-wielding locals.

The blue sky was a delight after more than a week of grey.

The view from the cathedral steps in Macas.

The view of the Upano River from Macas.

From Macas I pedaled down the highway through Sucua before crossing back over to the east side of the river about halfway to Mendez. There, I was back on dirt and despite being out of the mountains, there was several steep punchy climbs I had to overcome before descending back to the river where I was hoping to camp by the river on a sandy beach I’d read about on the iOverlander app. Along the way I passed through a village where a truck was stuck in the mud, drawing pretty much everyone in the area to either help push it out or watch people try. I stopped to help but instead was swarmed by kids who gleefully asked questions about me and my bike and my journey. I don’t know if I was the first bike tourer they’d seen, but I definitely provided a distraction from the usual village life.

I loved these signs in every town. 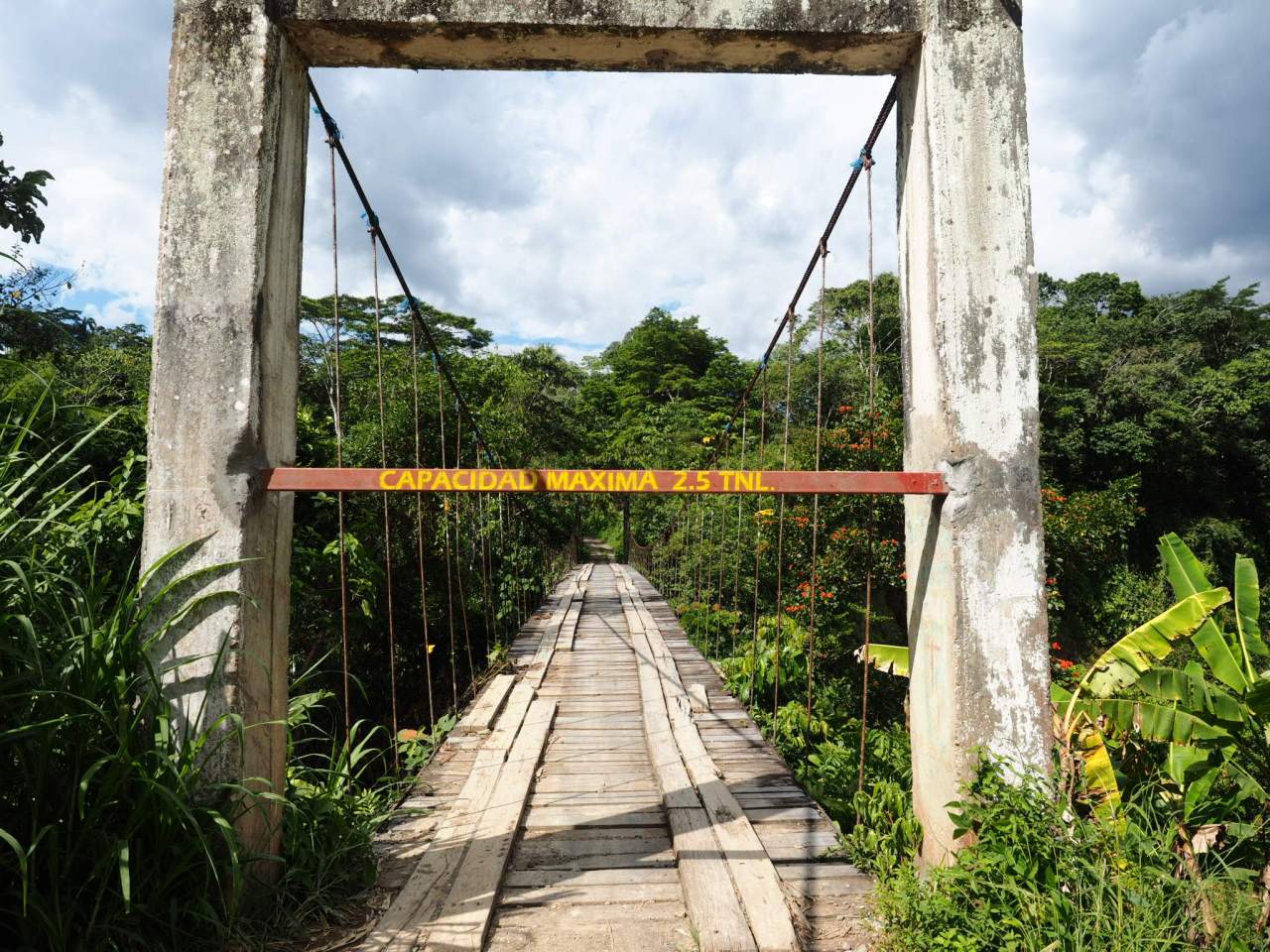 Most of the bridges along this road were like this. Cars and trucks would cross them.

Looking across the river at Logrono and the Andews.

Kids love bikes, but most of them ran away when I took this picture.

I reached my campsite around four. A few local kids had started a fire and were hanging about, but I pushed to another part of the beach and set up camp. I went for a soak in the river and cooked a simple dinner as the sun set. I was reading some articles I had downloaded onto my phone when someone started shining a flashlight at me from across the river. I flashed my headlamp back and that appeared to be that. I stopped seeing their lights and went back to my reading.

An hour or so later, as I was taking some star pictures, they started shining their lights at me again. Then, I saw them walk up to the road and across the bridge separating us. I could tell there was two of them and a dog, but not much else. “Why are they coming over here?” I wondered. The two people walked down the road leading to my camp spot, and then their lights went out. I put my knife in my pocket and walked over to the remains of the fire, thinking I’d grab a stick out of it if I needed a weapon. I called out several times, asking who was there. After a few calls, a response came in the form of a bright beam being pointed in my direction. The holder walked towards me, followed by another figure.

Finally, I could make them out in the light of my much dimmer headlamp. It was a father and son, who said they were out for some night time fishing. (Of course, the father had a machete with him.) We exchanged some small talk and both went on our merry ways – them to the river and me to bed. 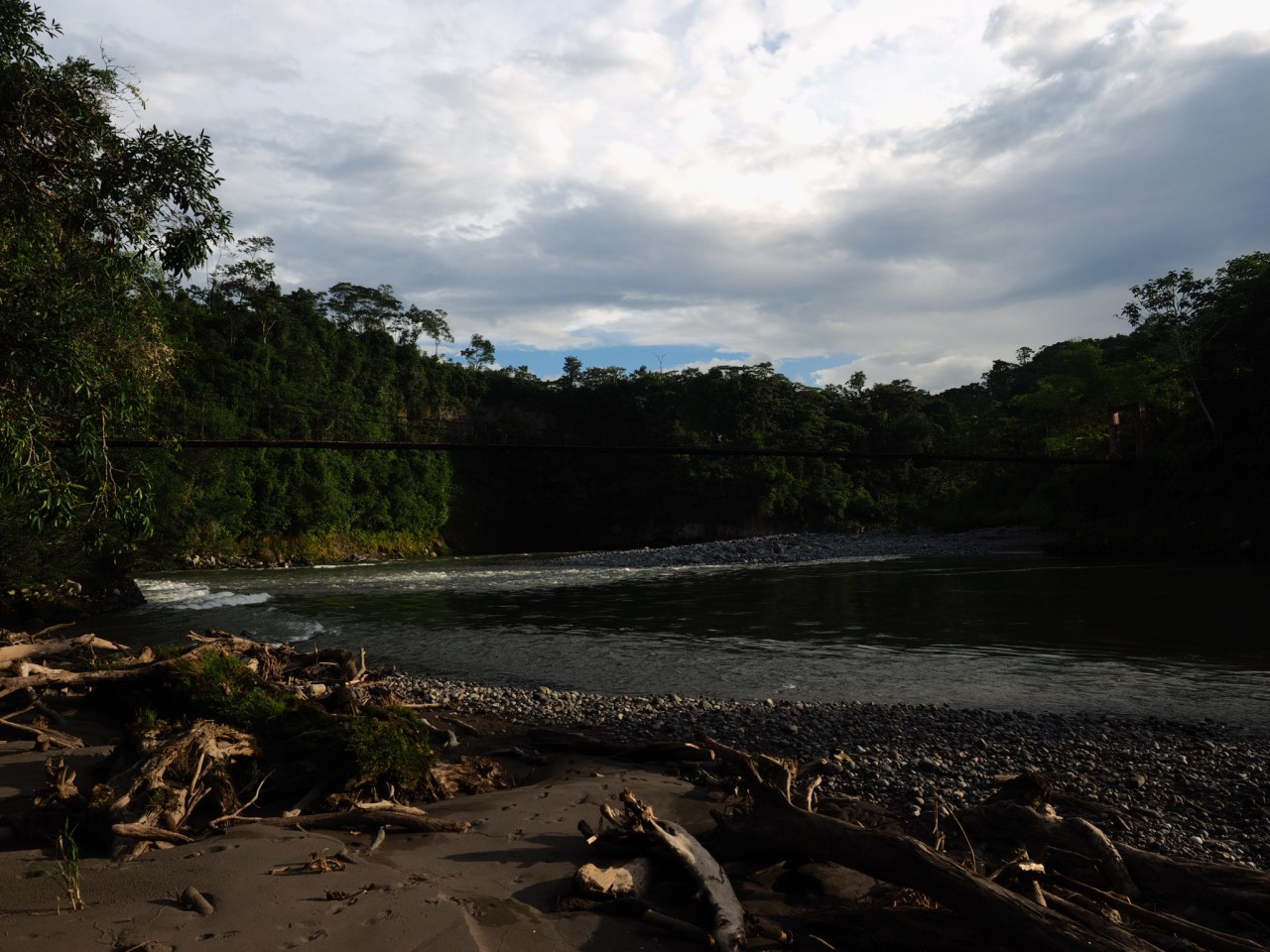 Kids on the bridge. 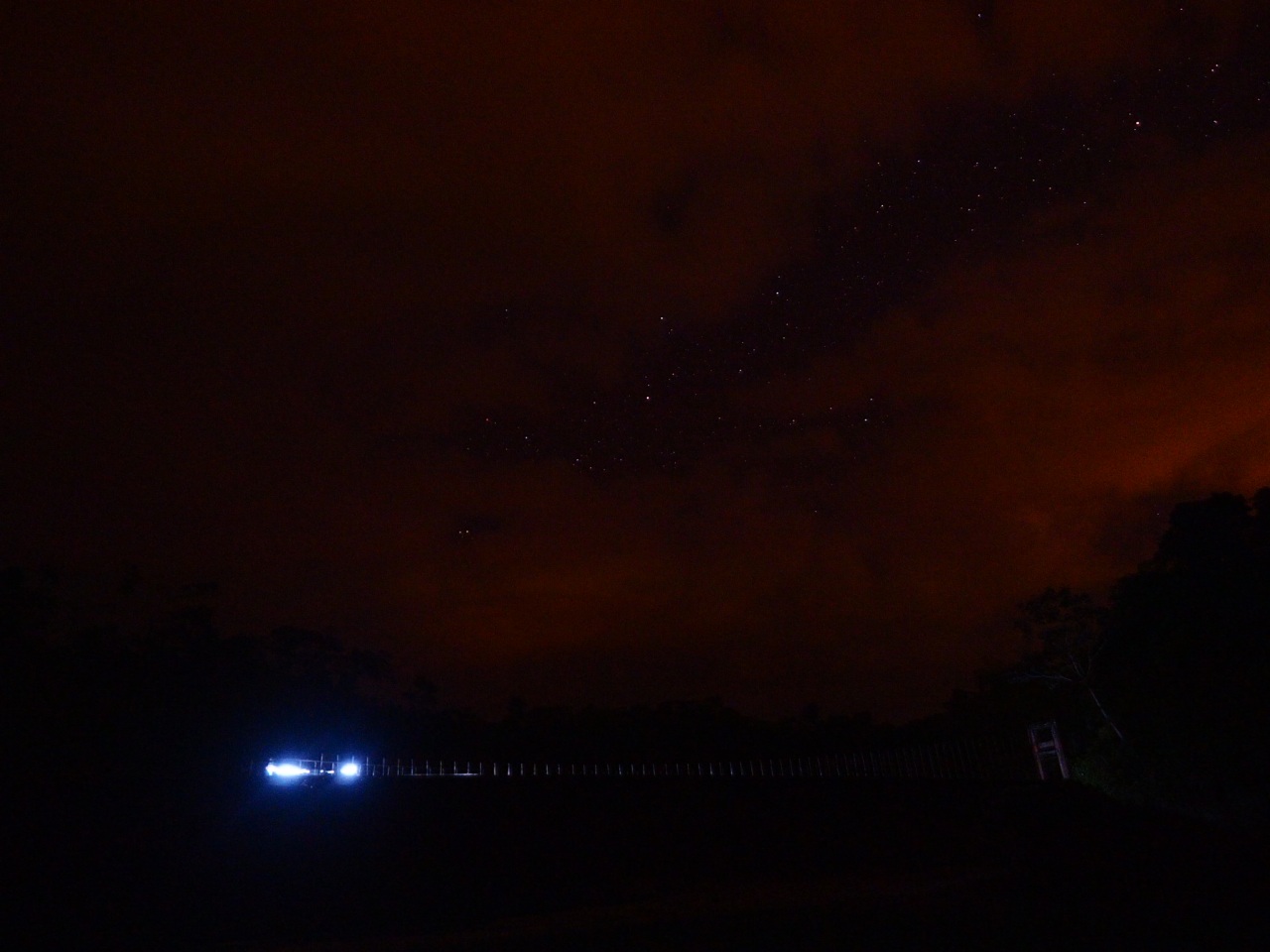 Watching strangers cross the bridge towards me. 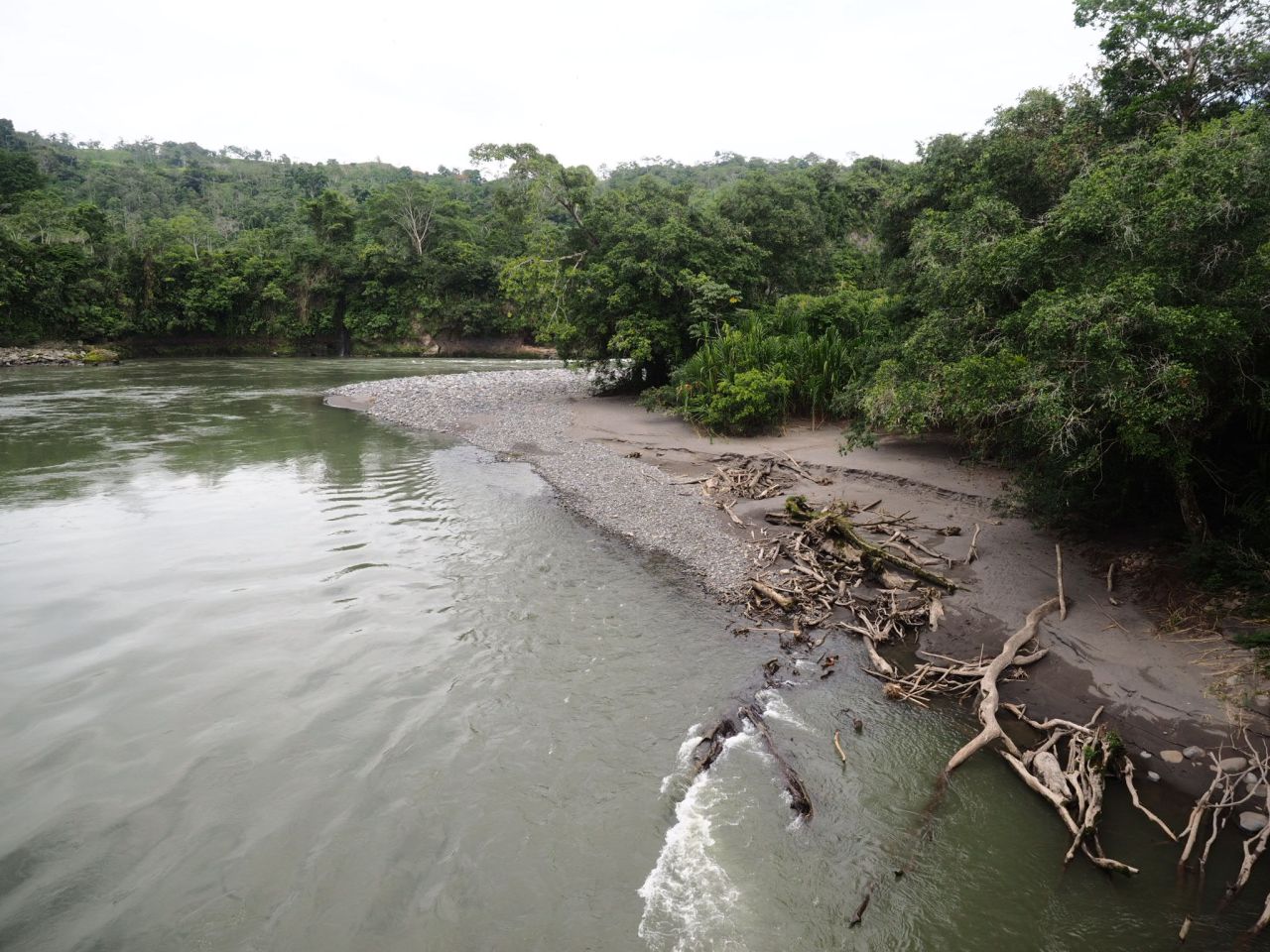 Possibly my best campsite of the trip.

I enjoyed a lazy morning the next day. After a few days of riding in the heat of the jungle, I decided I would take a bus up to Cuenca instead of riding my bike up the 3,000+ metres of climb that lay between me and my destination. I left my campsite at 10 and rode into Mendez, where I ate lunch and hopped on the bus. Mendez seemed like a pleasant small town and I wouldn’t have minded some more time to check it out, but the bus was leaving right after I ate, and I didn’t know how long it would be until the next one.

And thus ended my little jungle excursion. I didn’t see any wild animals, though I did see lots of birds. The area I went through was second growth and mostly disturbed by people. I considered heading down this dead end road into the territory of the Shuar people (who are most famous for their head shrinking) and trying to get a boat to Peru, but that felt like a real long shot. I also really wanted to see Cuenca, which I’d heard many great things about. The bus wound up the mountain road – which would have been one heck of a climb, and one wild descent – and pulled into the terminal just before sunset.

You can view the GPS track for this route here: https://ridewithgps.com/routes/26717086