To the coast with company: Santa Isabel to Mancora

One of the reasons bike touring suits me is I am generally very comfortable with solitude. While I do enjoy social interactions, I also have no issues spending days at a time alone, with little in the way of conversation with other people. I do enjoy my time in cities, staying at hostels and meeting other people, but I also love getting away on my own, slowly pedaling away, listening to a mix of podcasts, audiobooks, music and the sounds of the road.

I’ve always been like this – enjoying the party, but also enjoying being able to leave when I want. I do feel lonely at times, but I also love the freedom I enjoy – probably a little too much. I also don’t have any issues being out on my own. The lack of company has never stopped me from doing anything before – whether it’s going mountain biking, ski touring, hiking, or even a music festival.

On this trip, I’d spent all but 2.5 days cycling by myself. I spent one morning accompanied by a Colombian cyclist named William, and I spent two days riding into Cotopaxi National Park with a Kiwi named Michael before our paths diverged.

That was until I descended out of the mountains southeast of Cuenca, onto Highway E59, heading to the coast of Ecuador and the border with Peru. My plan was to climb back into the mountains and follow a network of dirt roads to Loja, then ride to Mancora from there for Christmas. When I hit the highway, at a lowly 1,300 metres, the heat hit me and I had thoughts of riding straight to Mancora. I knew the road to Loja involved a 2,000 metre climb, whereas heading straight to Mancora would mean 300 kilometres of mostly down or flat riding. I decided to sleep on it.

Then, as I climbed a short hill up near Santa Isabel, I saw a bike tourer stopped at the side of the road. His name was Colin and his friend Tom was just ahead. The third member of their group, Adrian, had pulled into a mechanic’s yard to fix a flat tire and they were waiting for him. I wasn’t sure of the exact situation, but it was getting late and as we started chatting, we agreed to find a place to stay together. A few minutes later the family that owned the shop offered us a place to sleep in their attic. Next thing I knew, we were pulling our bikes into the yard and sharing a bottle of mystery liquor with a group of locals.

The family that hosted us were amazing and friendly. They killed a chicken to make a soup and fed us breakfast the next morning. They were incredibly friendly and gracious hosts and their attic had plenty of room to spread out. They even offered to drive us to the coast, which we politely declined. 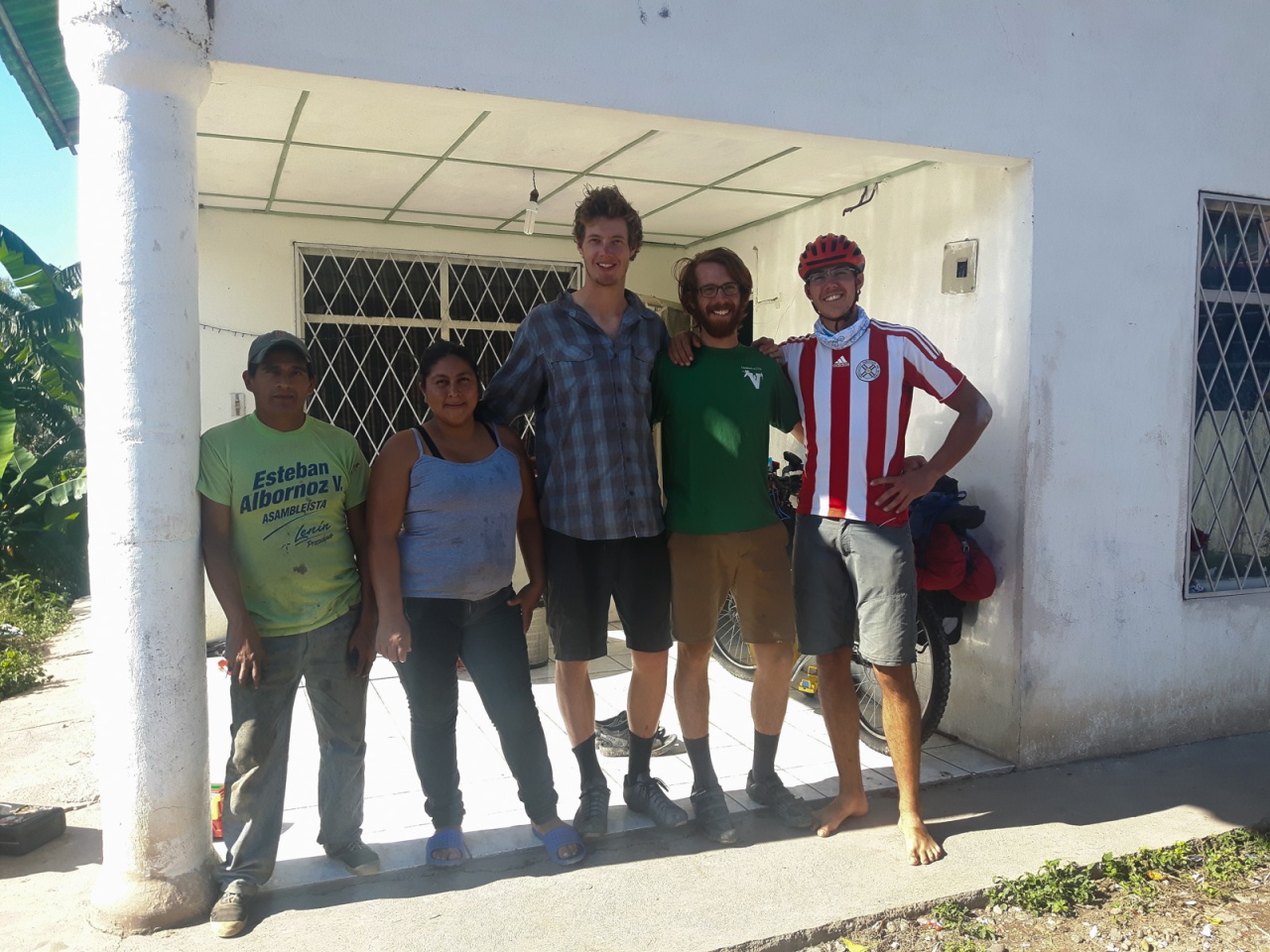 Our hosts, Tom, Colin and Adrian.

As for my route, the thought of having some company on the road was appealing, so I decided to join Adrian, Colin and Tom on the ride to Mancora. They were college friends out for a post-graduation adventure through South America and we hit it off well, trading stories about our various adventures. Turns out they were only a day or two behind me on my little detour to the edge of the Amazon, and Tom had actually been out for a little overnight solo excursion out of Cuenca when he saw my bike parked outside a restaurant the previous day, but didn’t stop.

Riding with other people took some getting used to and the later starts and waits at the side of the road were somewhat annoying. Not to mention the increased likelihood of mechanical issues (or in this case, constantly leaking tires). My routine has generally been to start riding by 8 a.m. and go until 5 p.m., with one good lunch break and lots of short stops to take photos and snack in between. Now, I had to get used to riding with others, dealing with the different nuances in how they ride, and enjoy the journey in a different way. I consider myself fairly lad back, but sometimes I wondered about my ability to just relax and take it easy and be social, rather than just drive to move forward. I’m really in no rush to get anywhere, but at the same time, I do have an urge to keep progressing on my journey.

We left the highway-side mechanic’s shop at almost 10 a.m. and began the long descent down the quiet, smooth highway to the coast – though there was enough climbing and a fierce headwind that kept us honest. The highway carved its way through a dry canyon before reaching more fertile ground as we approached sea level. The descent ended at the city of Pasaje, where we grouped up and decided to push on to Santa Rosa for a 110 kilometre day. Past Pasaje, there was one harrowing stretch of highway with heavy traffic and little shoulder, but soon enough we were on the six-lane Pan-American Highway and flying down the flats into Santa Rosa on a road surrounded by banana plantations. It felt nice to be able to pedal hard and fast for a change, reaching a cruising speed of 30 kilometres per hour. The coastal areas have a poor reputation for safety so that night we settled into a hotel with a pool before going out to eat. 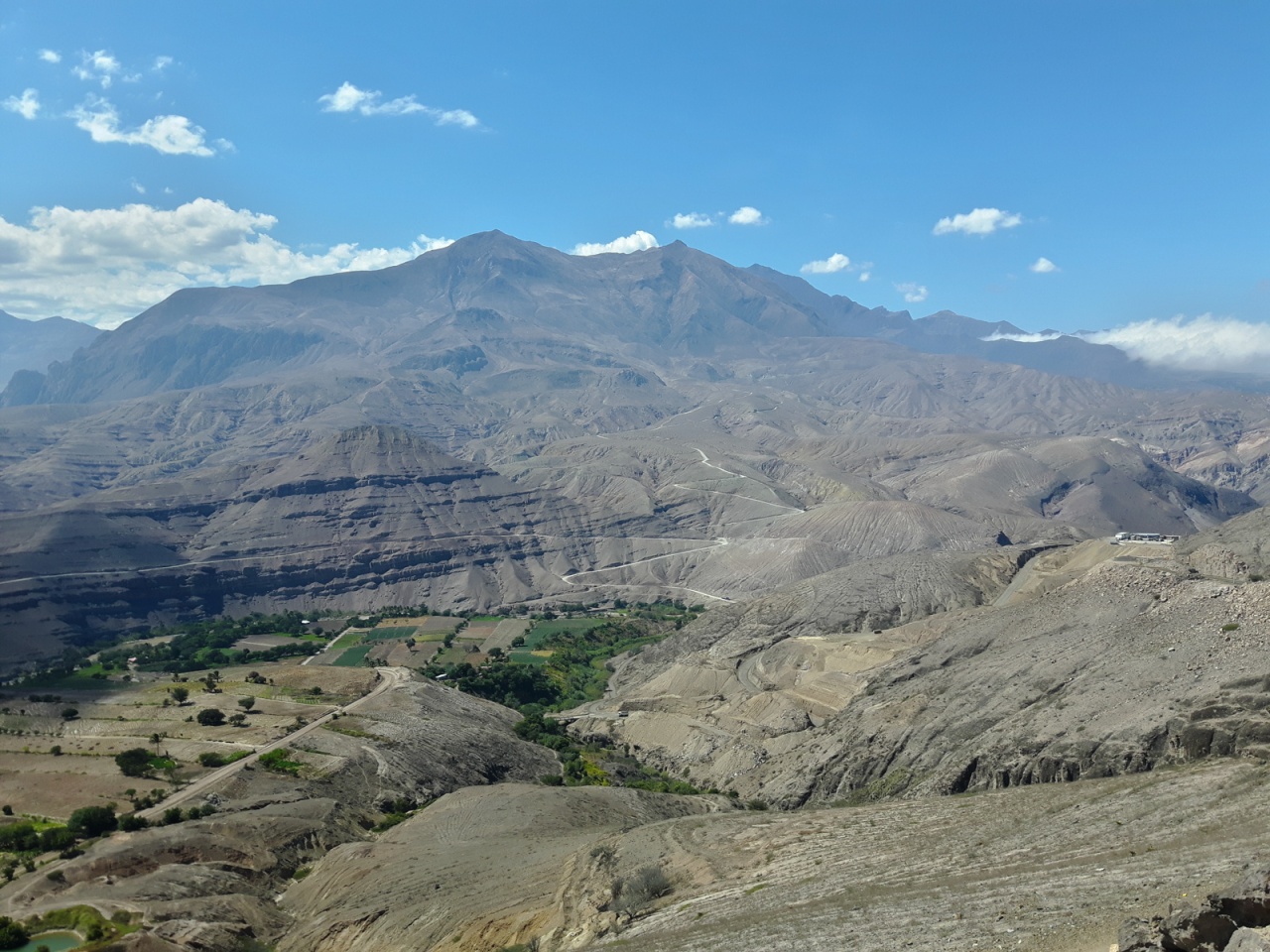 The mountains became much drier as we approached the coast. 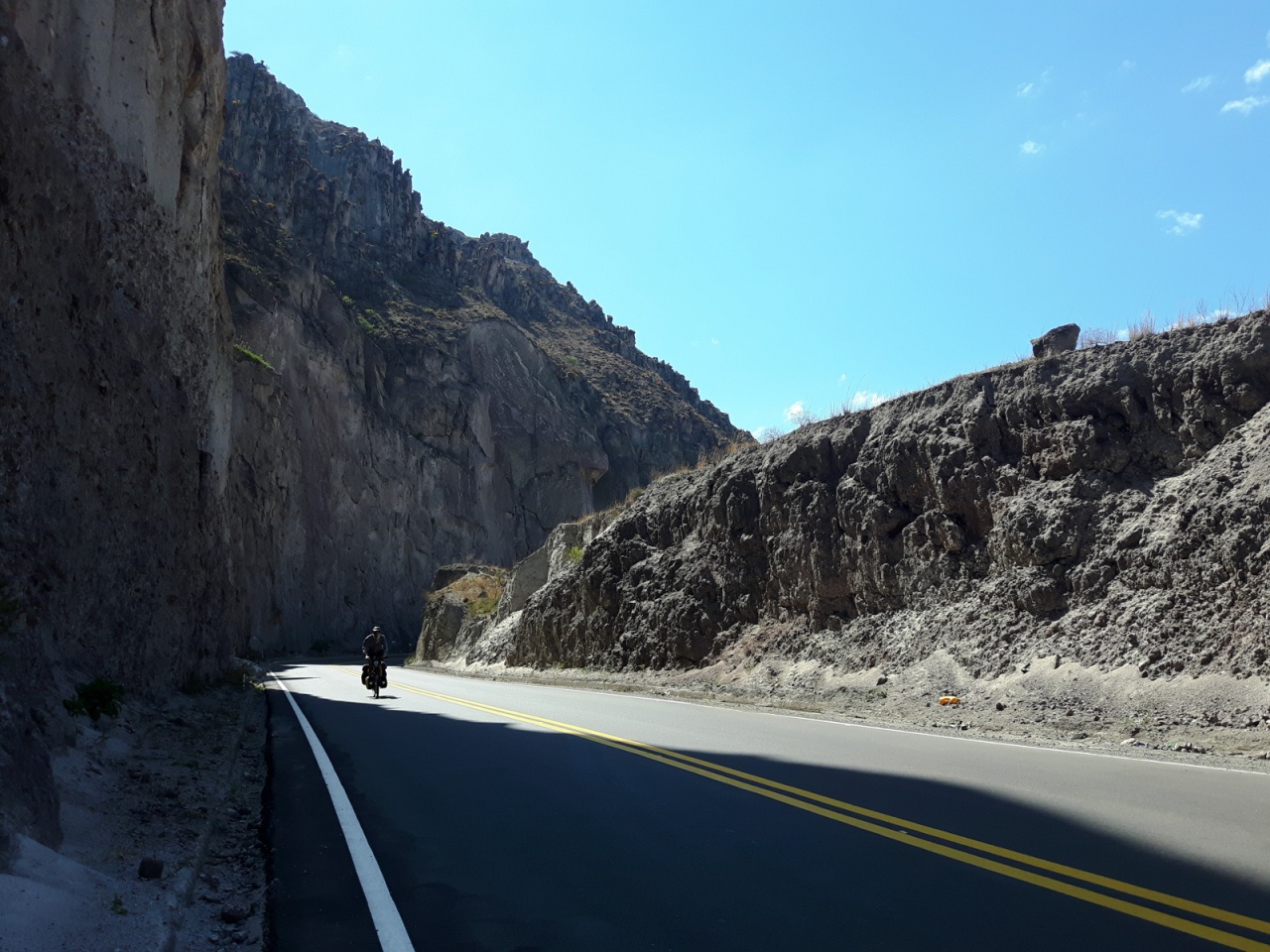 Tom cruises down the highway to the coast. 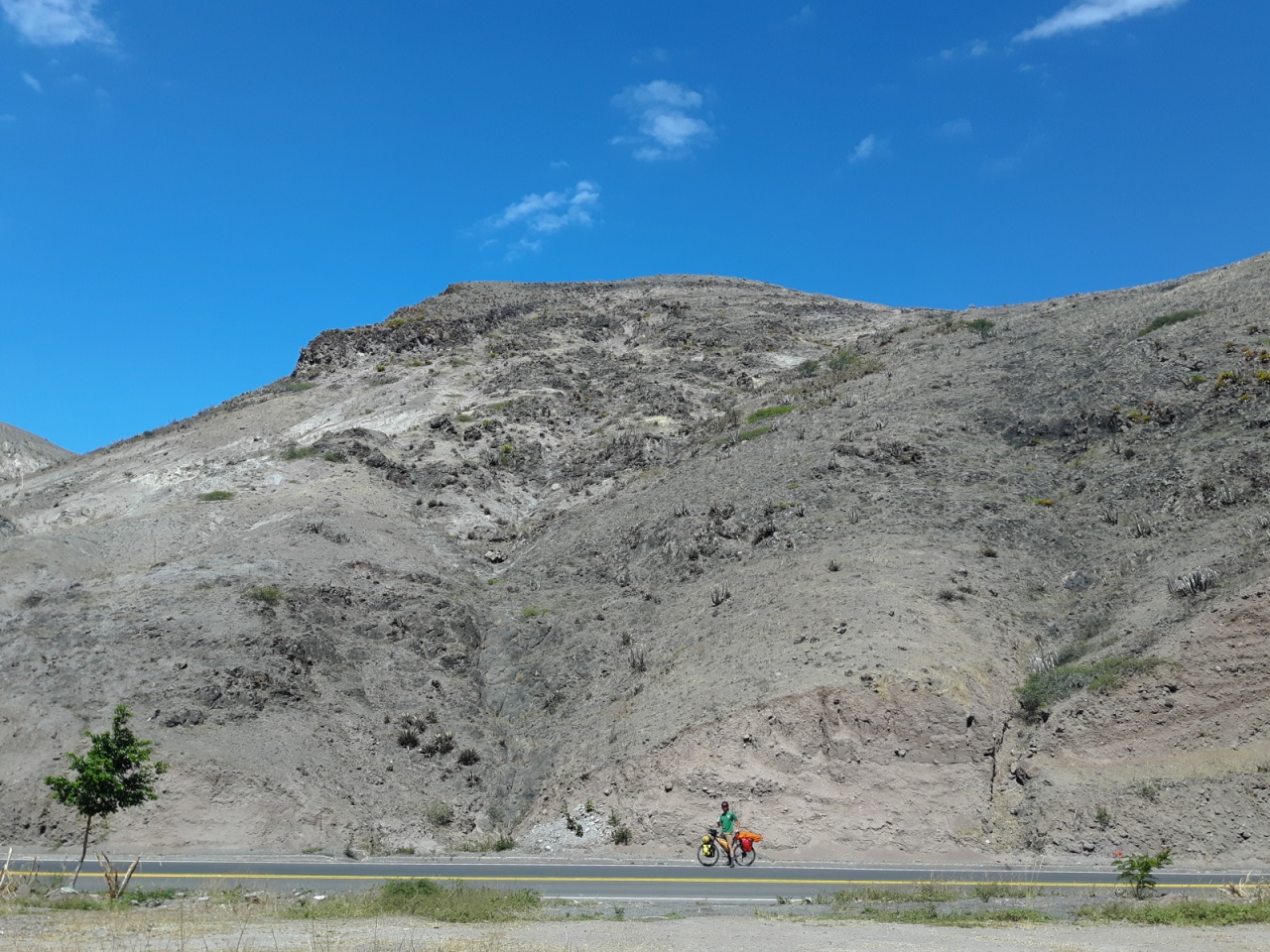 Colin coasts through the barren mountains. 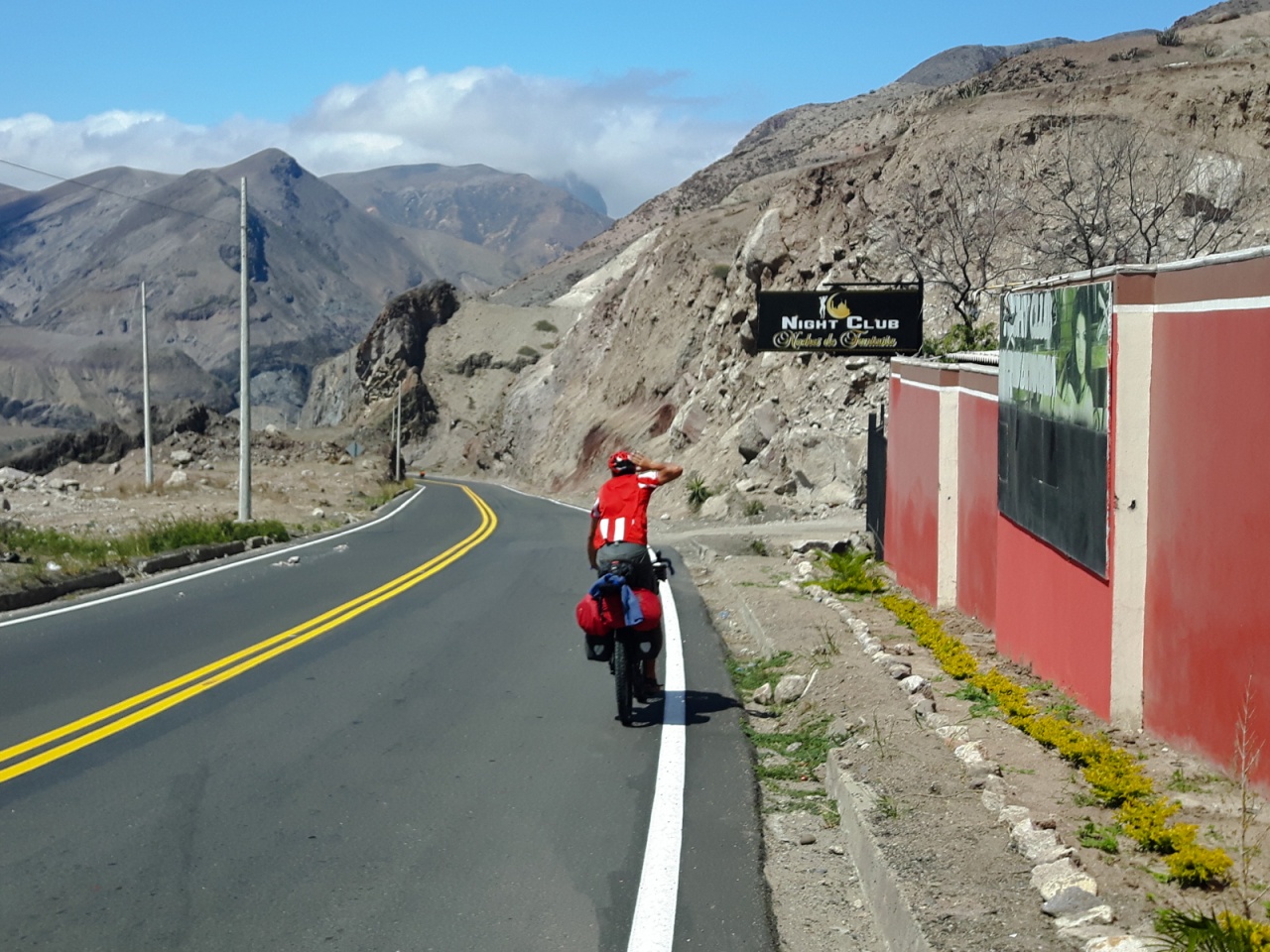 Adrian salutes the men’s night club alongside the highway. 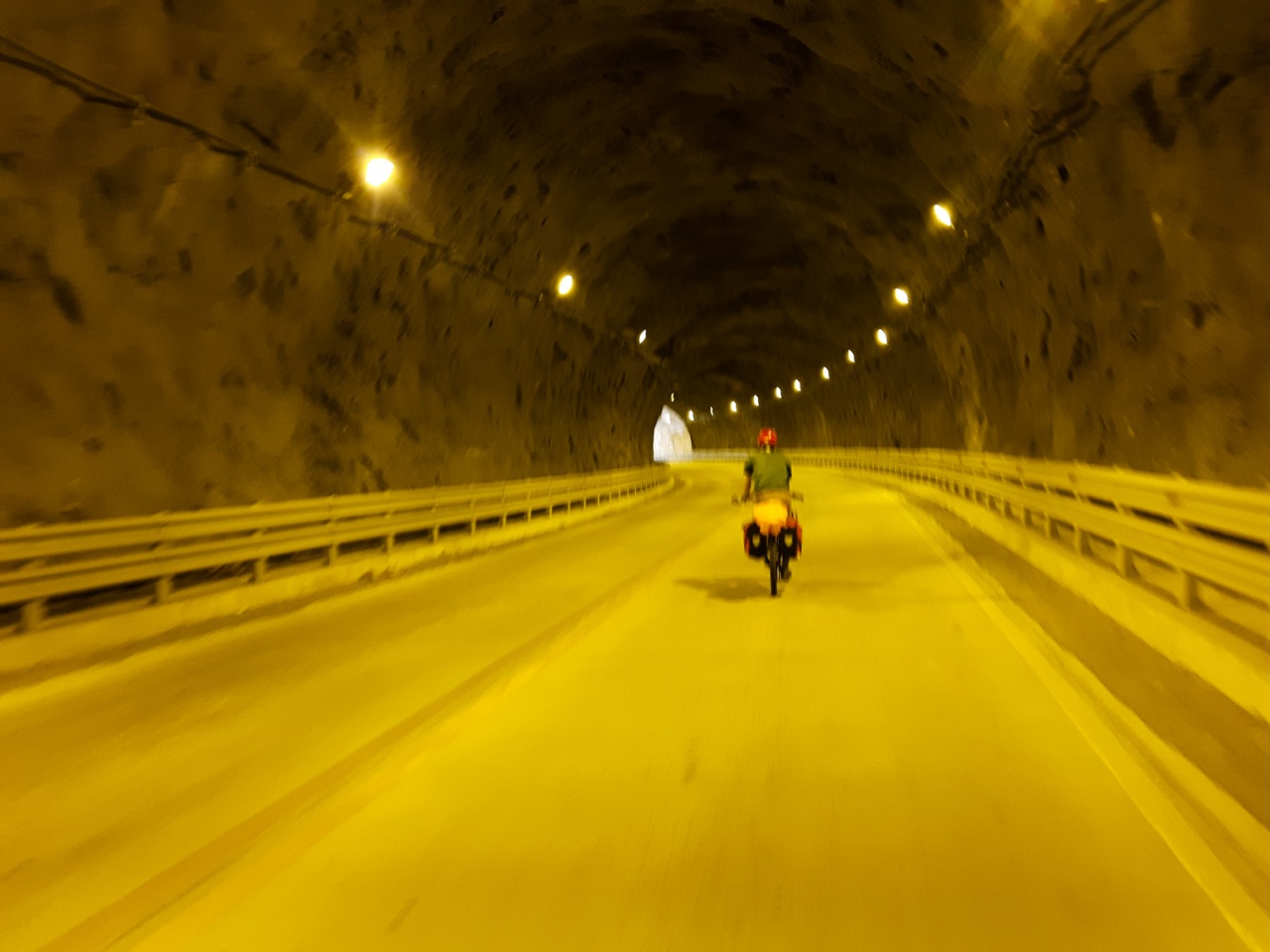 We cruised through several tunnels on our way out of the mountains. 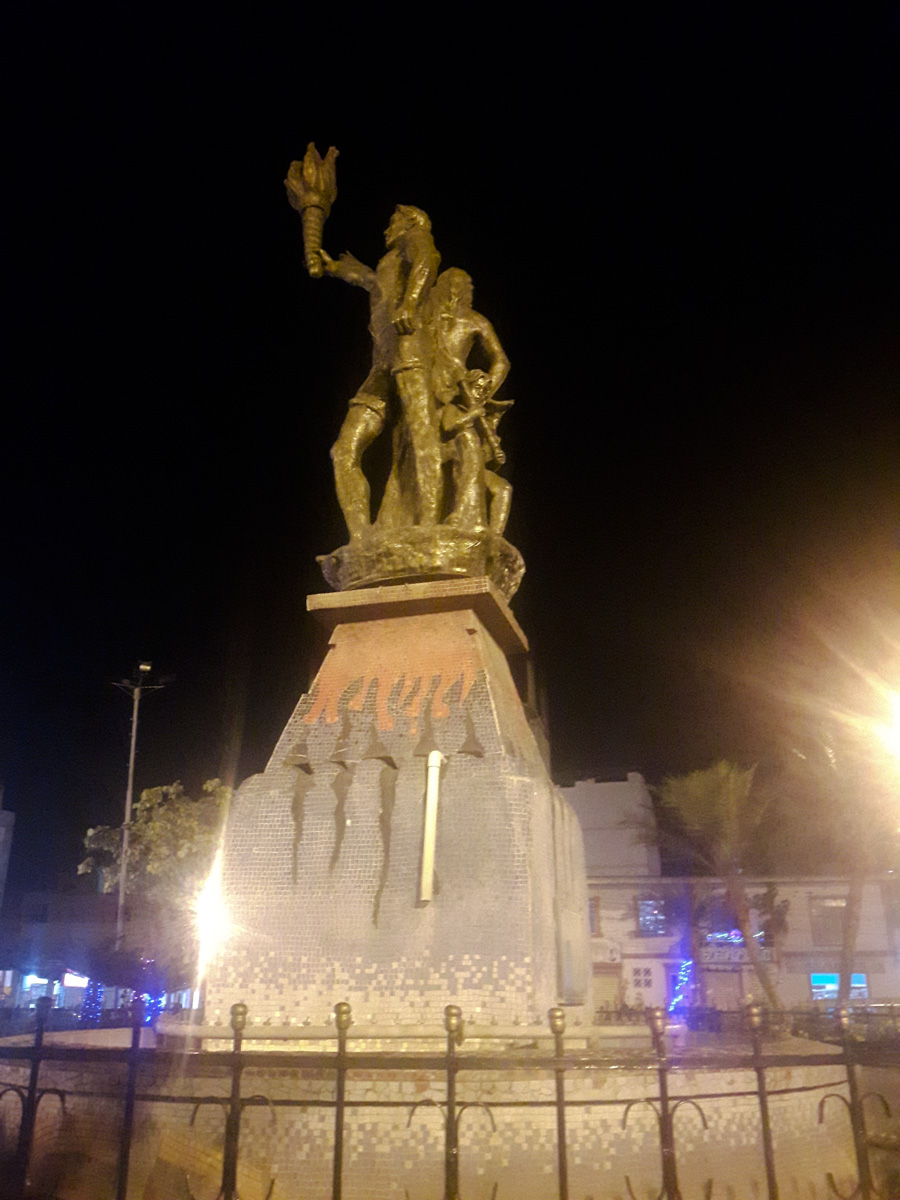 After 100 kilometres, we settled in Santa Rosa for the night.

We set out the next morning for the Peruvian border and enjoyed an easy ride to the Guaquillas for lunch before heading to the border. The wide road was almost devoid of traffic as we crossed the bridge over a dried-up riverbed that divides Ecuador from Peru. We reached customs, only to encounter a huge line of people in front of us – many of whom were Venezuelans fleeing the turmoil in their country and fanning out across South America in search of work. It was a Saturday afternoon at the start of the Christmas holidays it took three hours to get our passports stamped and move on. 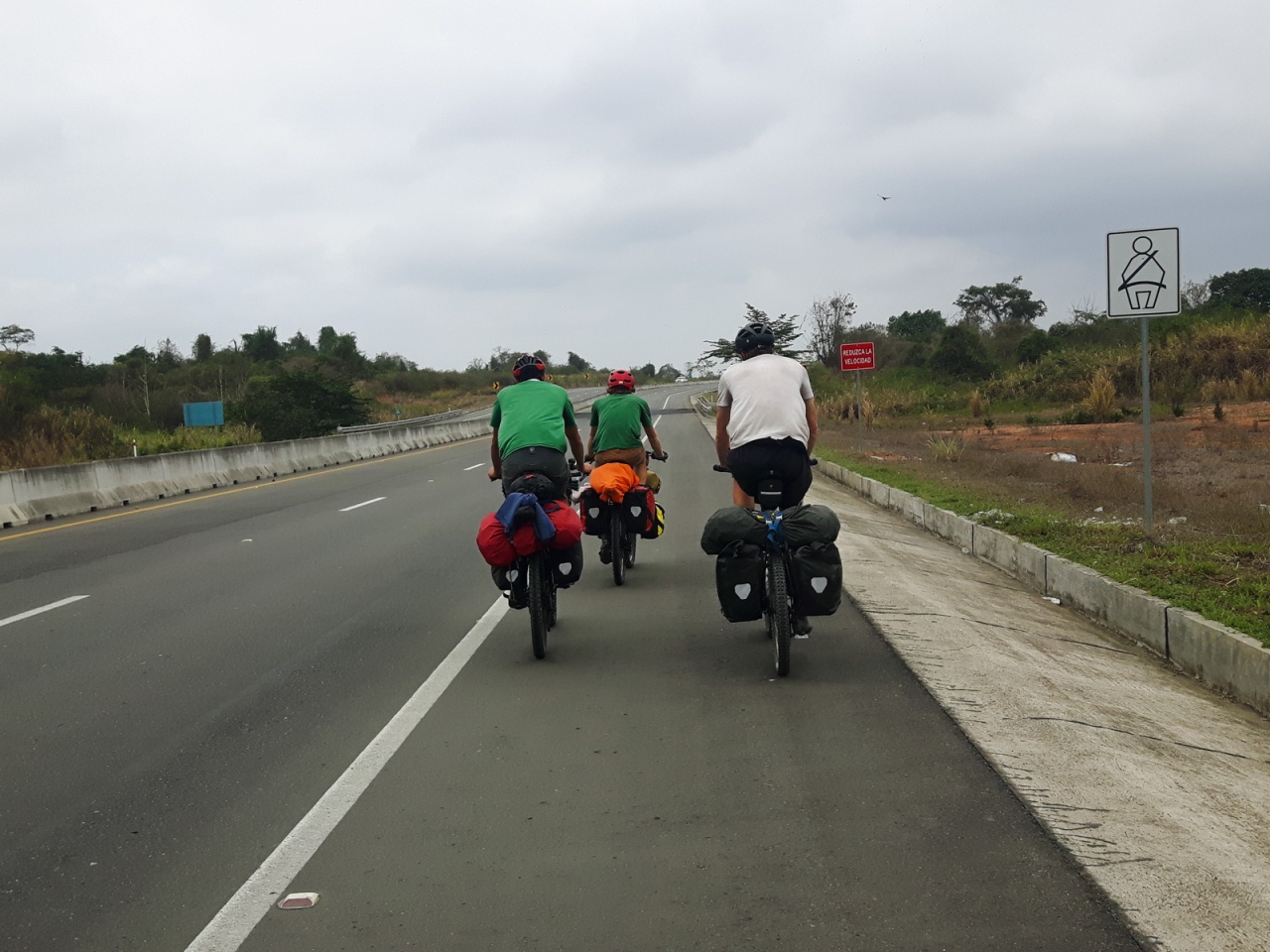 Flying down the Pan-American towards the border. 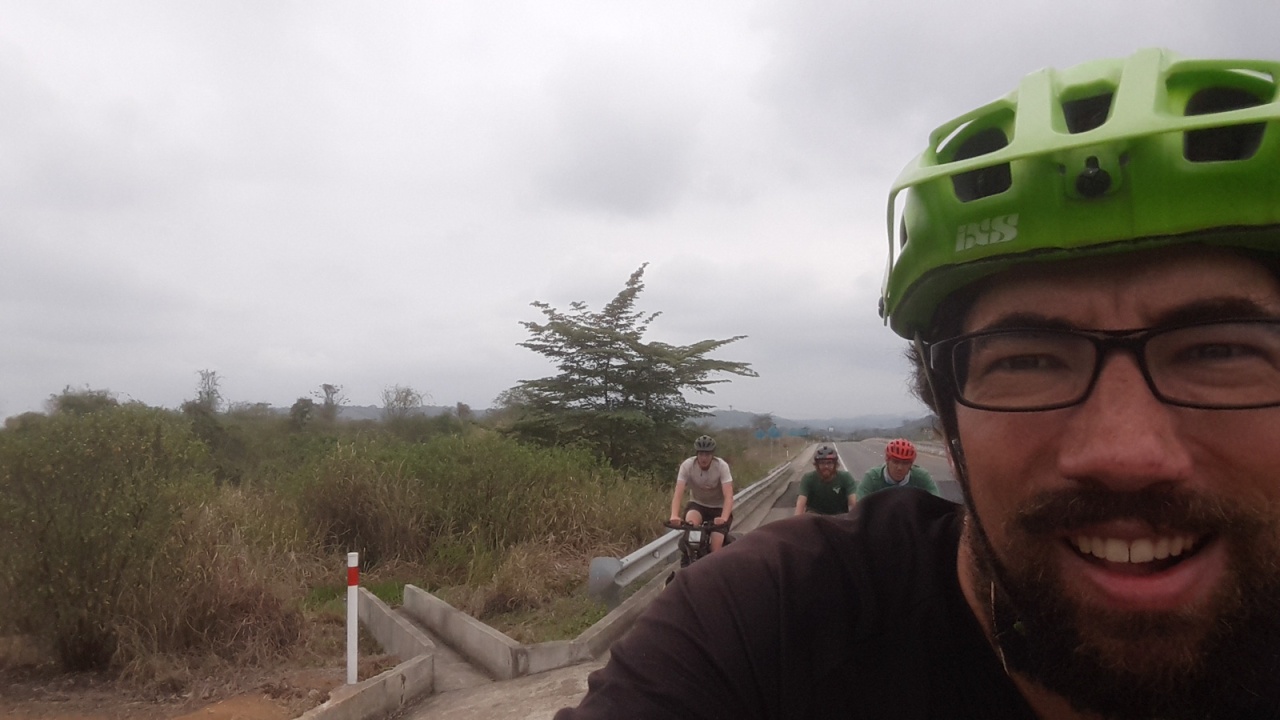 When the road is this flat and straight, you can get away with taking a selfie. 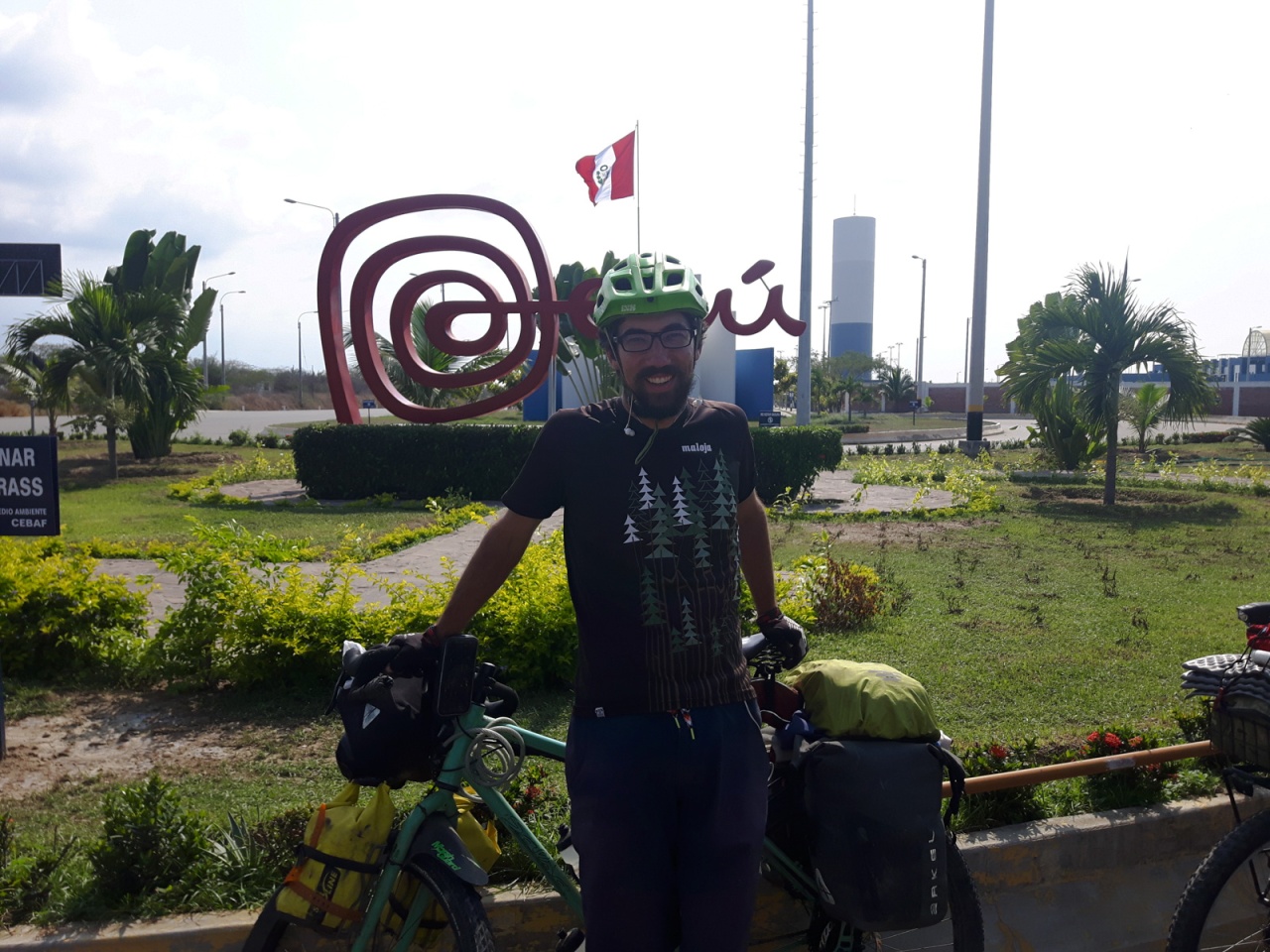 Me, at the border. 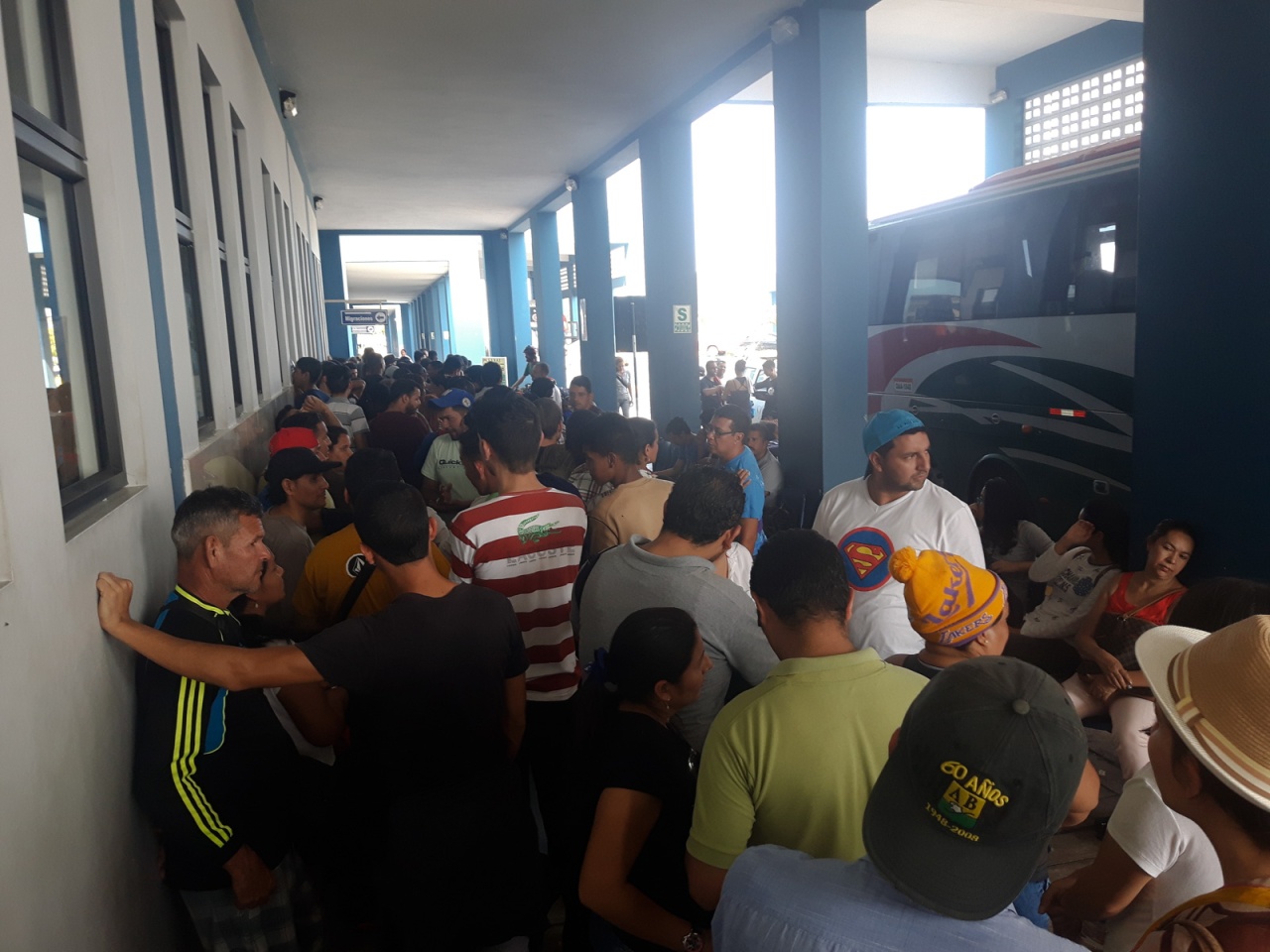 And the reason for the three hour wait.

The delay meant we weren’t through customs until after 5 p.m., which meant we couldn’t make it as far into Peru as we hoped that day. As we waited, we discussed options on where to stay and settled on hitting up the firefighters in Zarumilla, a city only a few kilometres into Peru. The bomberos are well-known in the bike touring community for hosting cyclists but when we reached Zarumilla, there was no one at the station. We checked out a couple of hotels and, fortunately, during our delay, someone showed up at the station and let us in. We were offered beds and a shower and the firefighter on duty – Jose Luis – showed us around to a few restaurants. We started off by sharing a big platter of ceviche and, when that wasn’t enough, we went for burgers. And he was shocked at our appetites when we followed that up by going for ice cream. 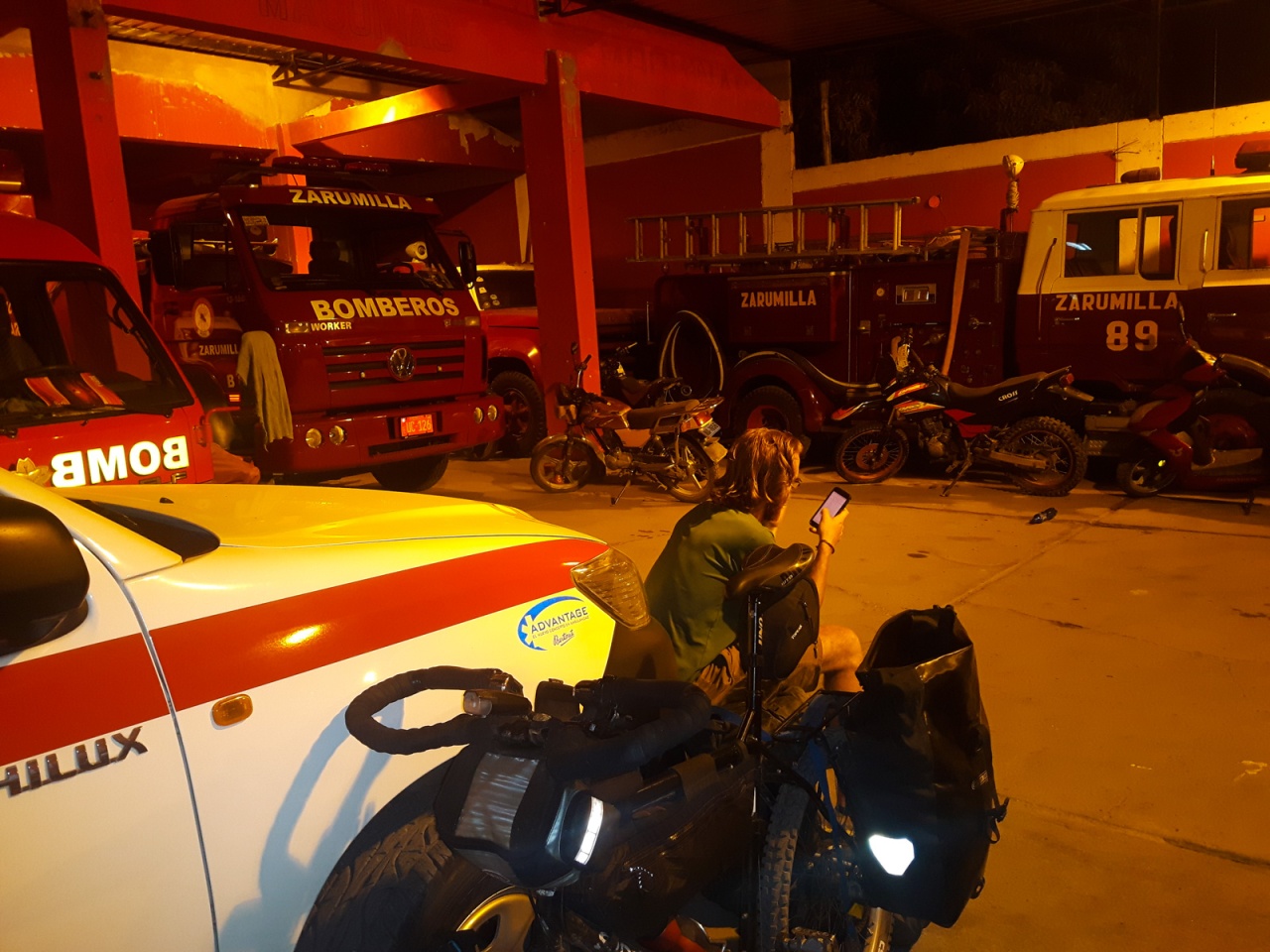 The next morning we had a lazy start and didn’t get going until almost noon. Tom and Colin both had to deal with flat tires, and we knew we couldn’t make it to Mancora in a day, so there was no rush to get going. Riding through Peru was an entirely different experience than Ecuador. We left Ecuador on a six-lane highway surrounded by banana plantations and entered Peru on a two-land road surrounded by dust and garbage. The riding was truly unpleasant – there was lots of traffic, little shoulder and it smelled of a mix of garbage, manure, sea water and dead animals. Our goal was to get to Zorritos, a small beach community that Jose Luis recommended. I charged ahead, eager to get this stretch over with, but that just meant longer waits in what little shade I could find. 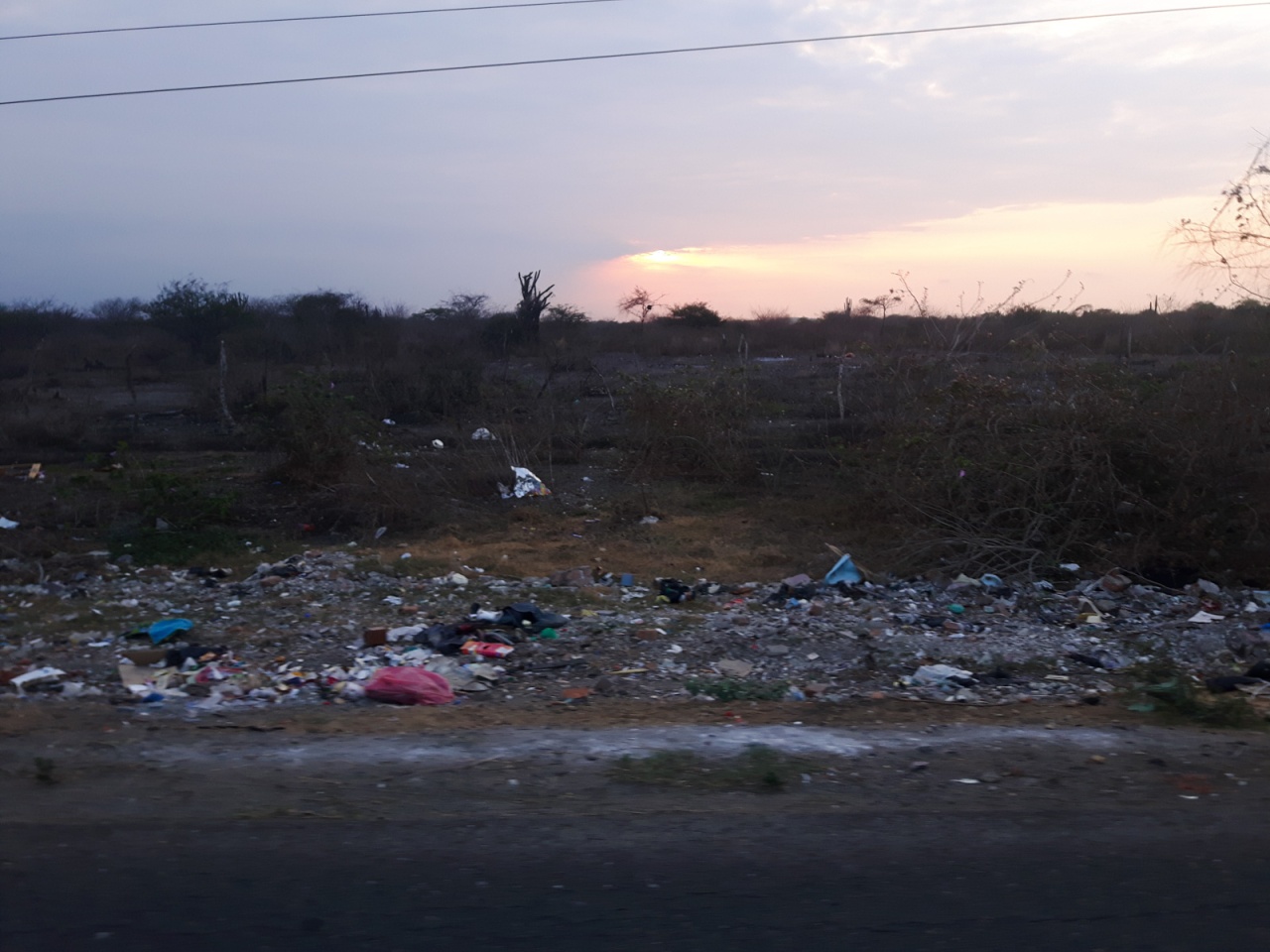 The Pan-American is mostly one giant garbage dump near the border. 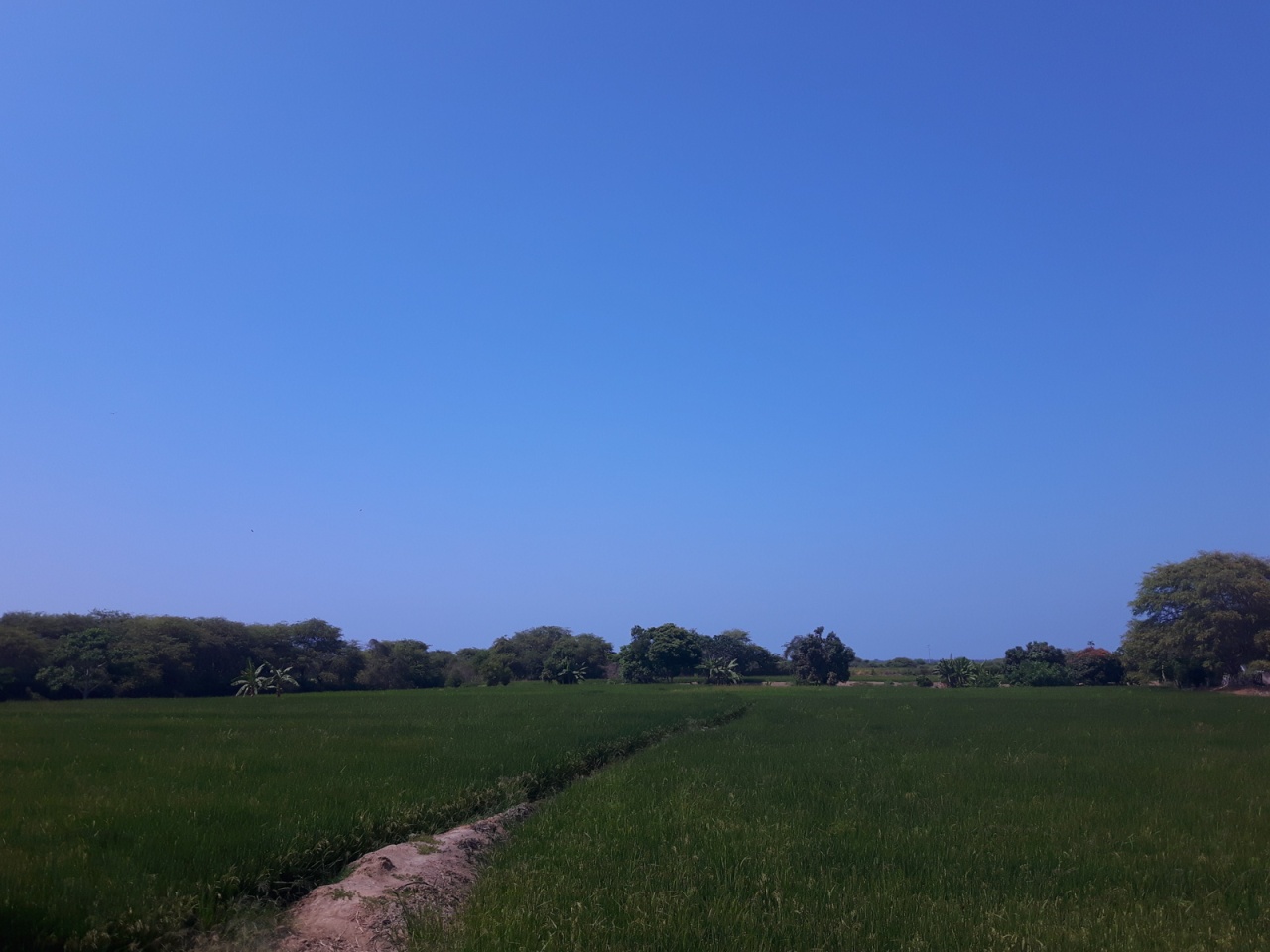 Though there are some nicer spots. 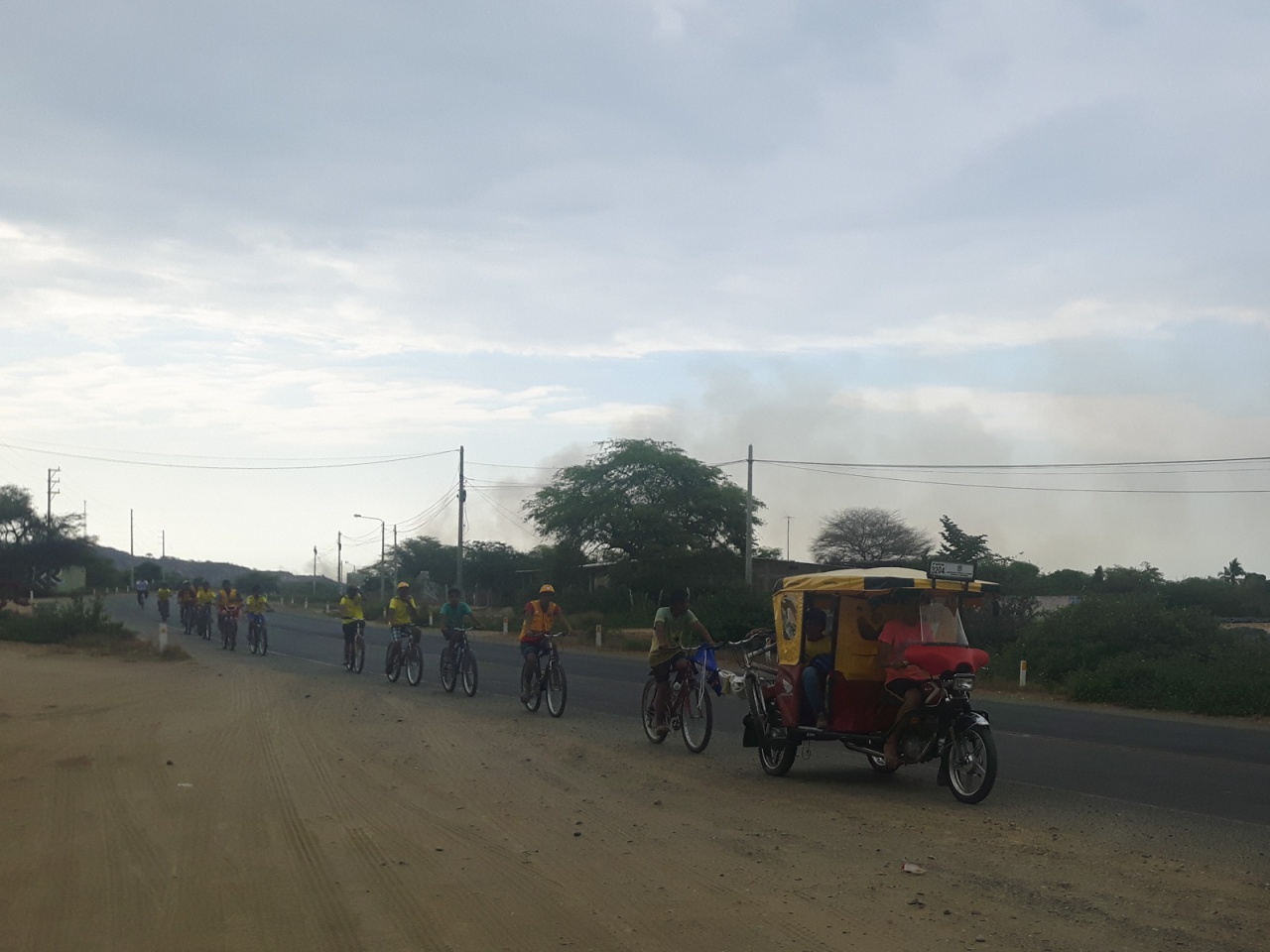 A group of local cyclists ride past during our lunch break.

That night we camped on the beach in Zorritos after being assured it was safe. I set up my tent to keep out the bugs while the others simply laid out their mattresses and sleeping bags on the sand. I was able to wake up the next morning and jump straight in the ocean, before we went for breakfast at the market while Colin dealt with his ongoing flat tire problem – he lacked a spare and his patches were leaking slowly. The ride that day to Mancora was equally unpleasant as the previous one, with a headwind adding to the tedium. I pedaled hard down the highway, pushing the pace as much as I could. We had a late lunch, at which point I said I was going to charge ahead to Mancora so I could jump in the pool at the hostel we had reserved. I was completely shattered to arrive in Mancora and find out the pool was under repair. 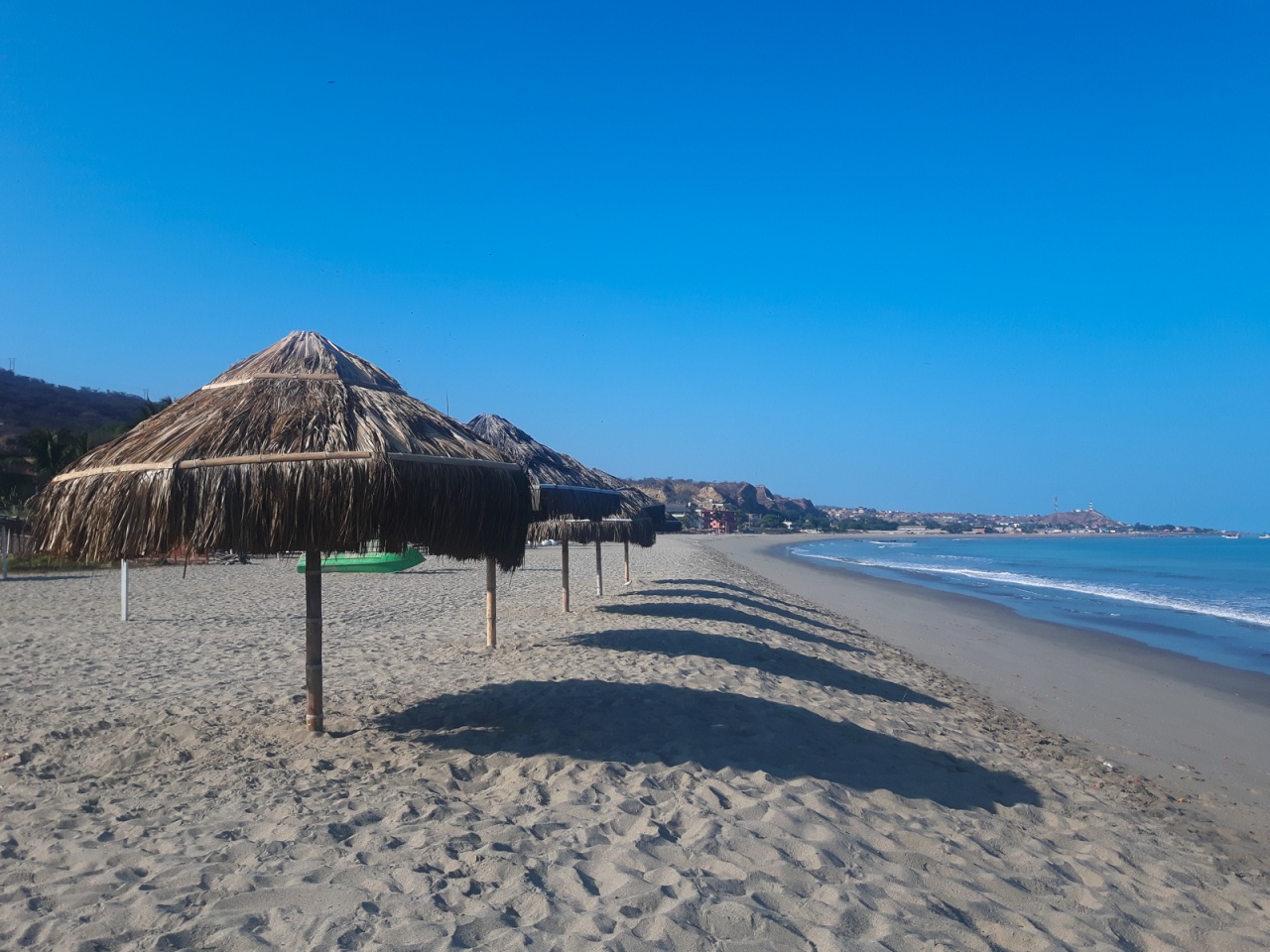 Waking up on the beach in Zorritos. 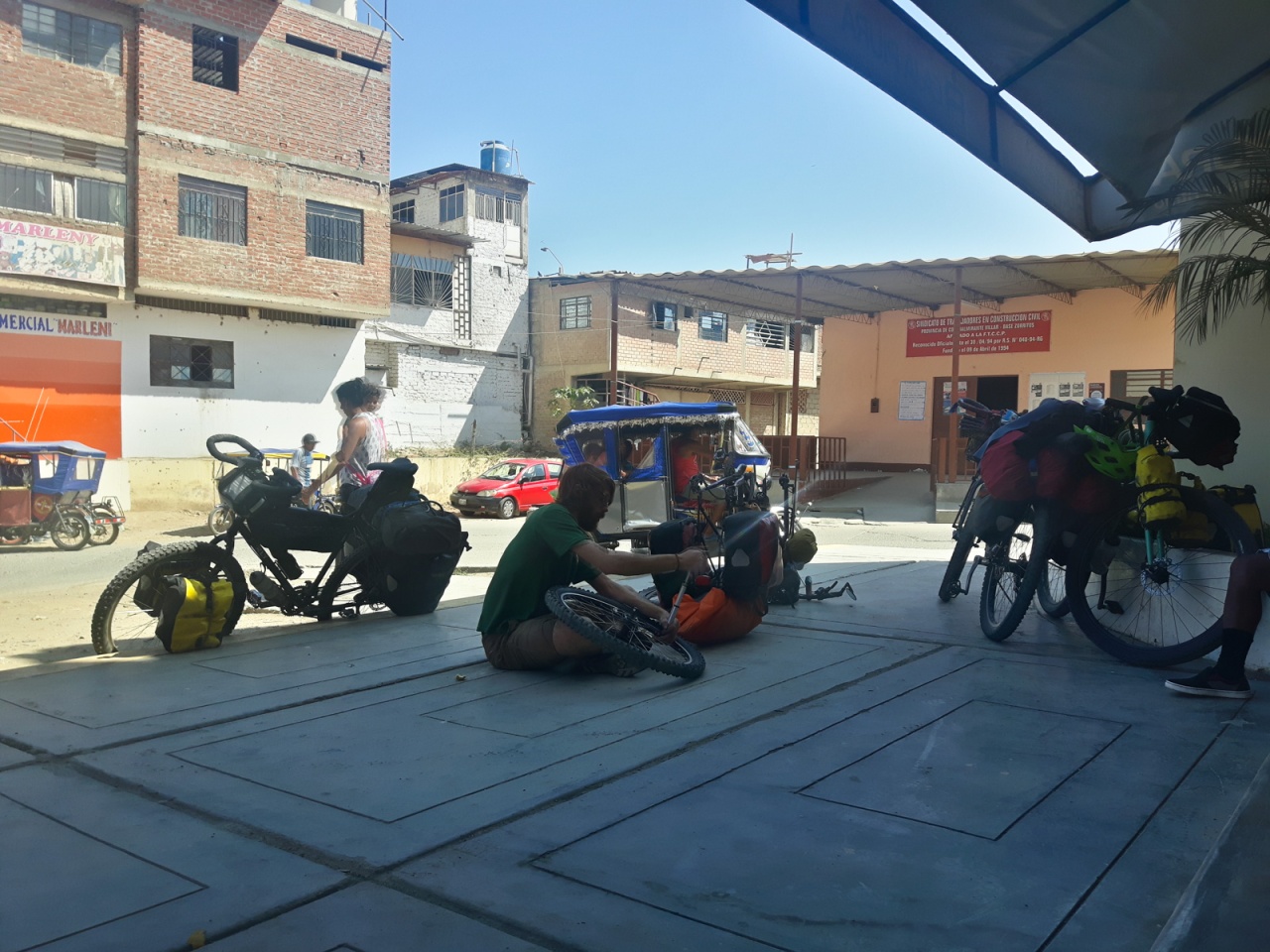 Colin tries to patch up his tube in Zorritos. 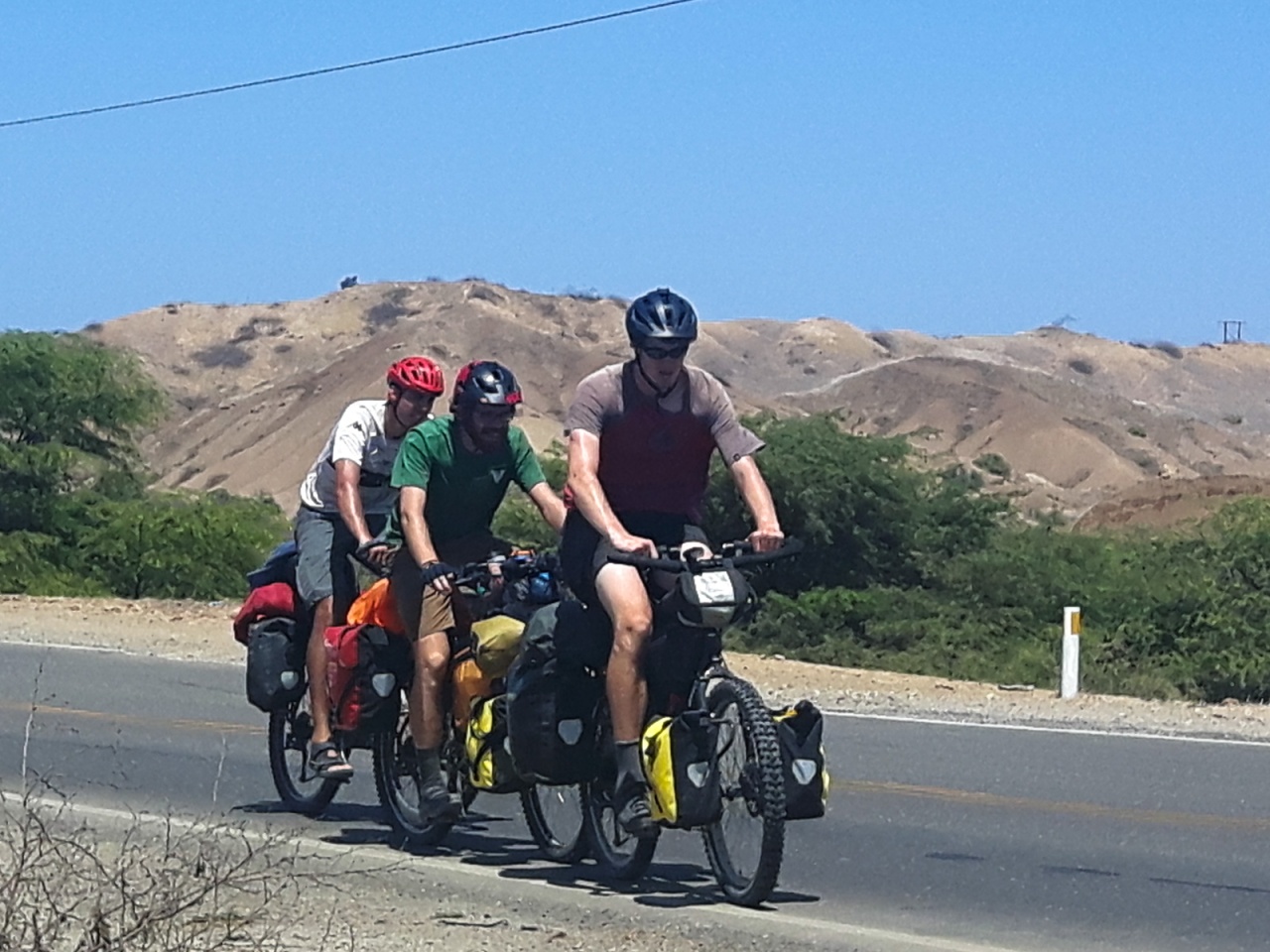 Friends that ride together, stay together. 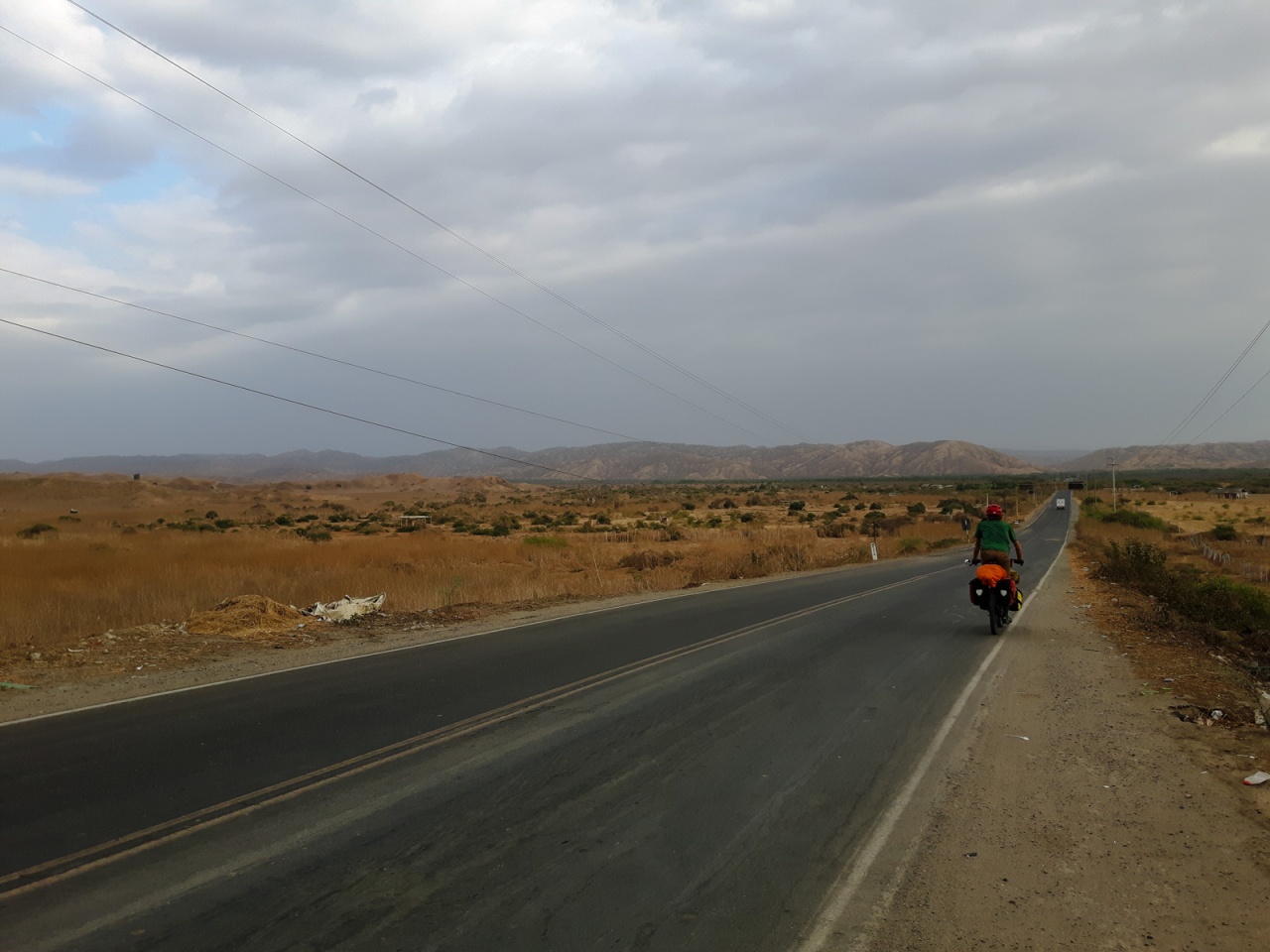 Colin flies through the hills on the final stretch to Mancora.

After six days of riding, it was time for a rest. We moved from our pool-less hostel to Misfits, a backpacker hostel right on the Playa del Amor. It was an incredibly relaxing spot, where days consisted of waking up, having breakfast, playing in the waves, finding a hammock, reading, going for lunch at the market, and then returning to the beach for more relaxation before watching the sunset, cooking dinner, drinking beer and playing games. 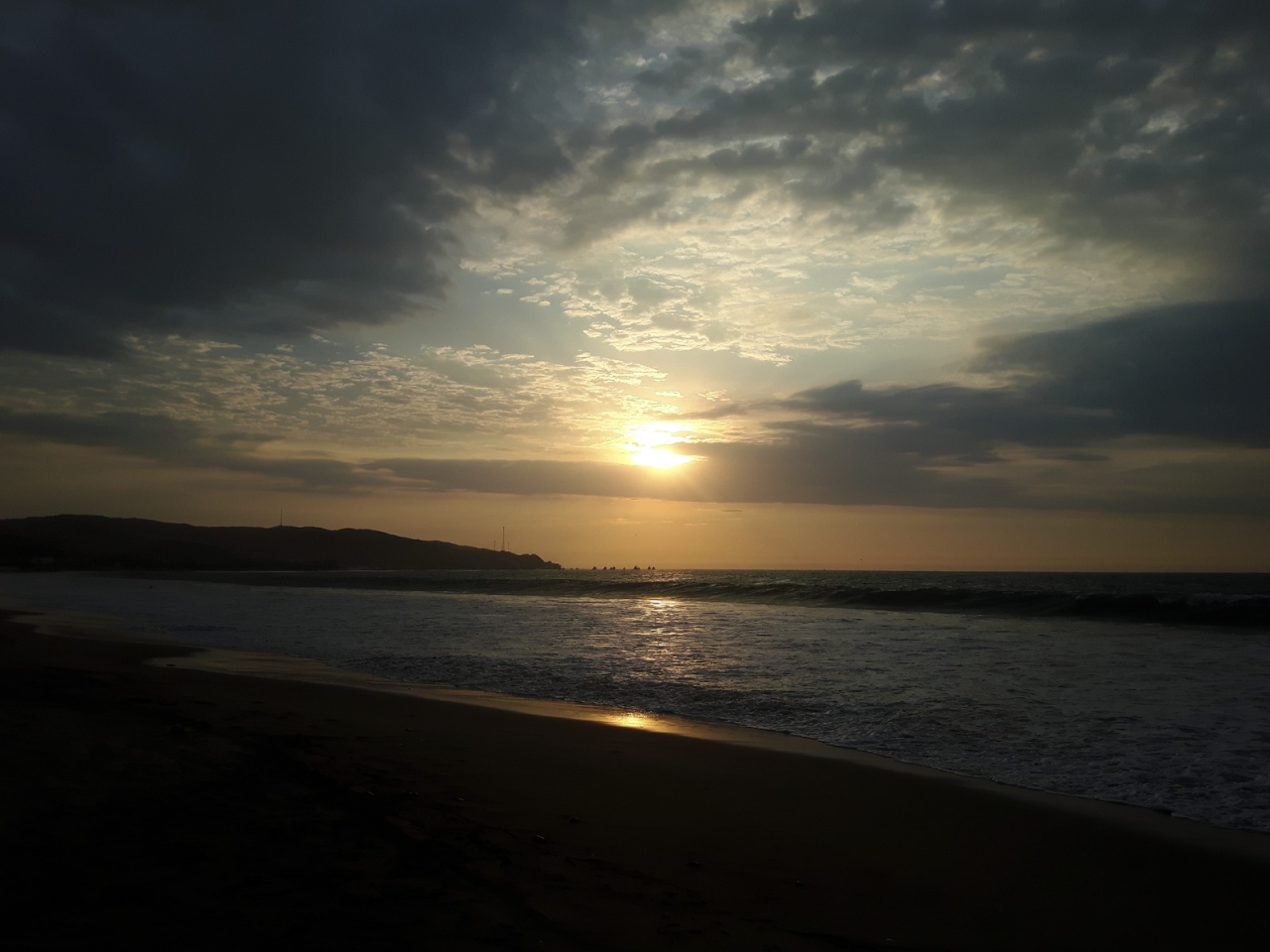 The first sunset in Mancora.

Adrian plays on the slackline at Misfits Hostel. 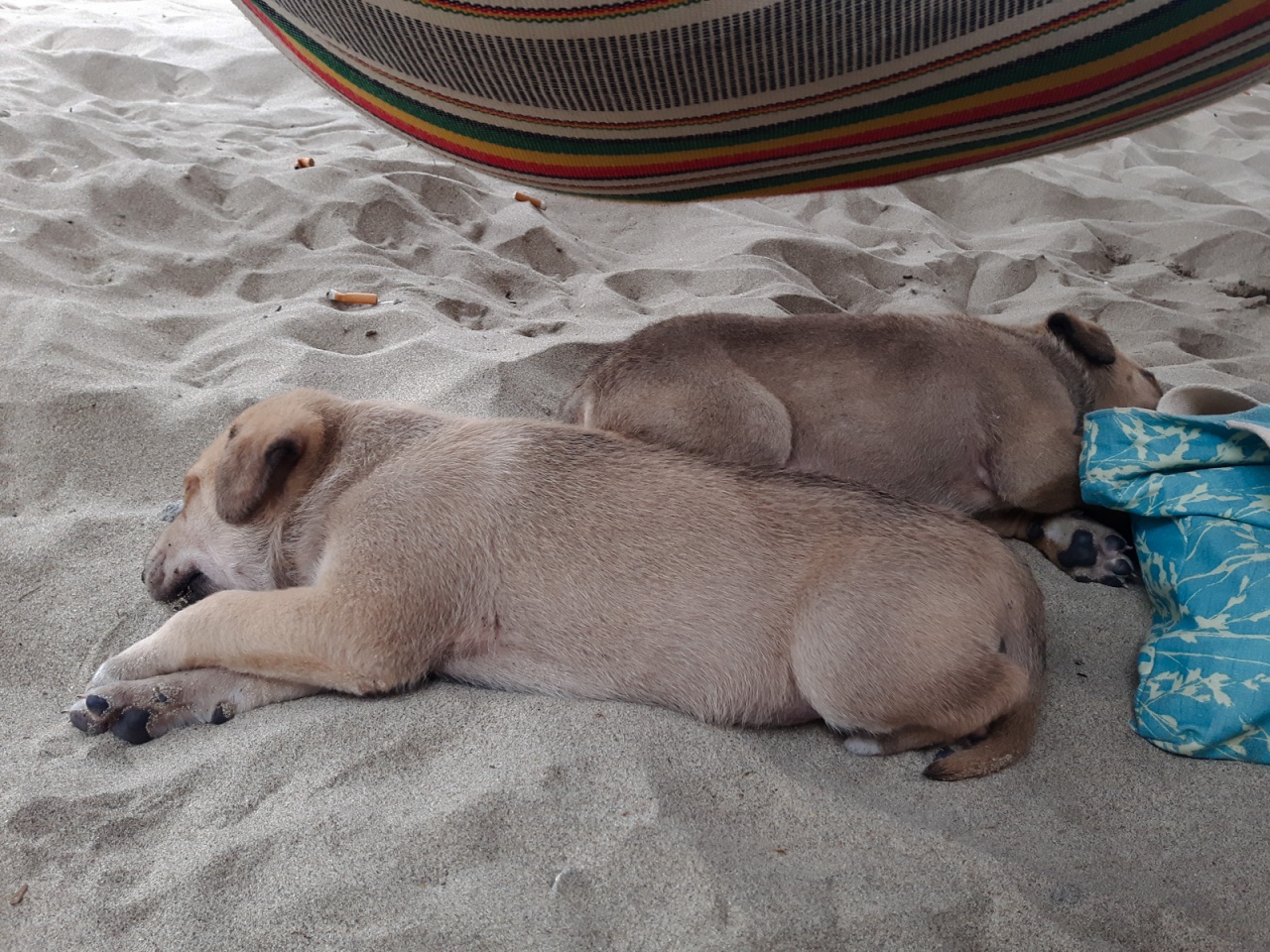 The stars of the hostel were these two puppies. 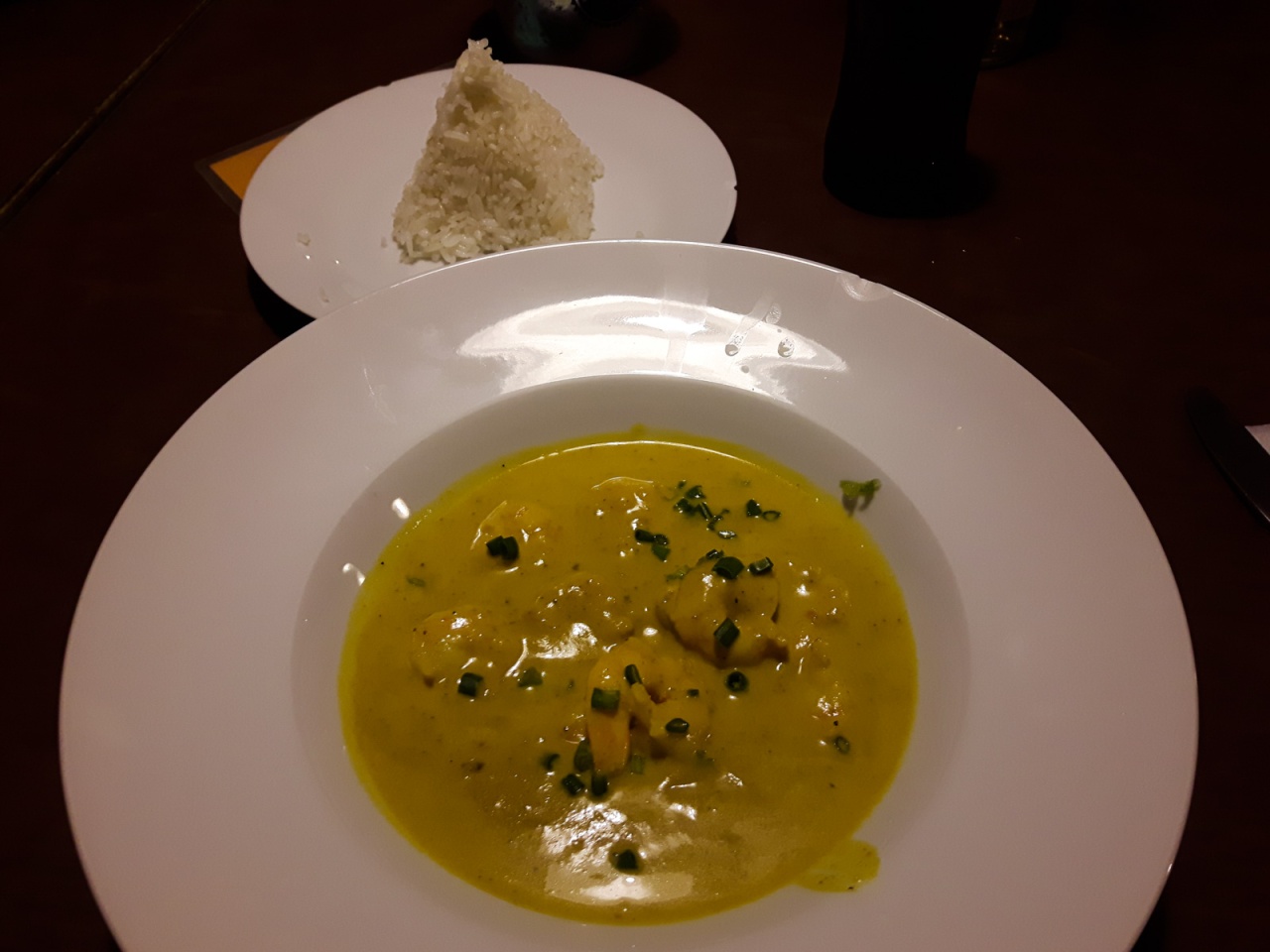 It was Tom’s birthday while we were in Mancora, so we went out for a fancy meal. I had a delicious curry with rice in the shape of a pyramid. 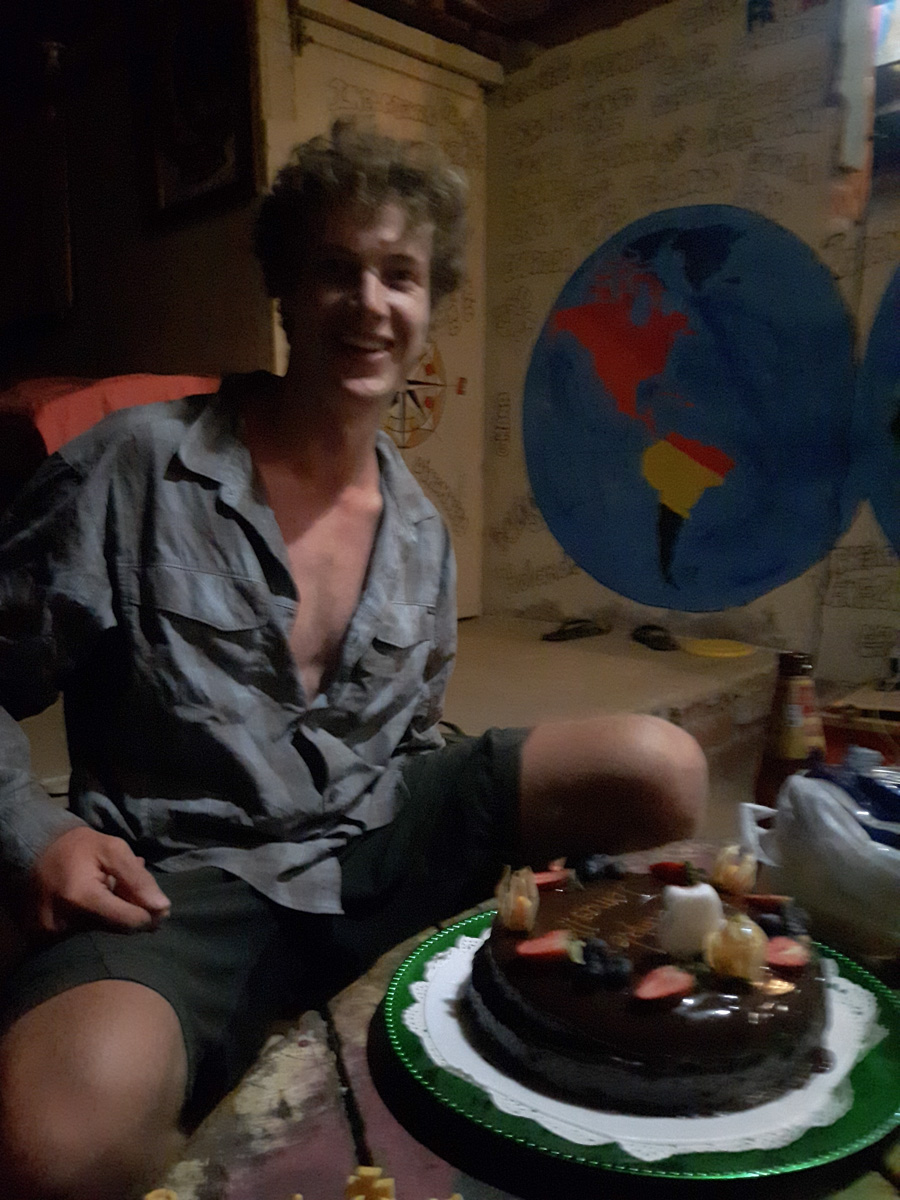 After, we went back to the hostel for cake. 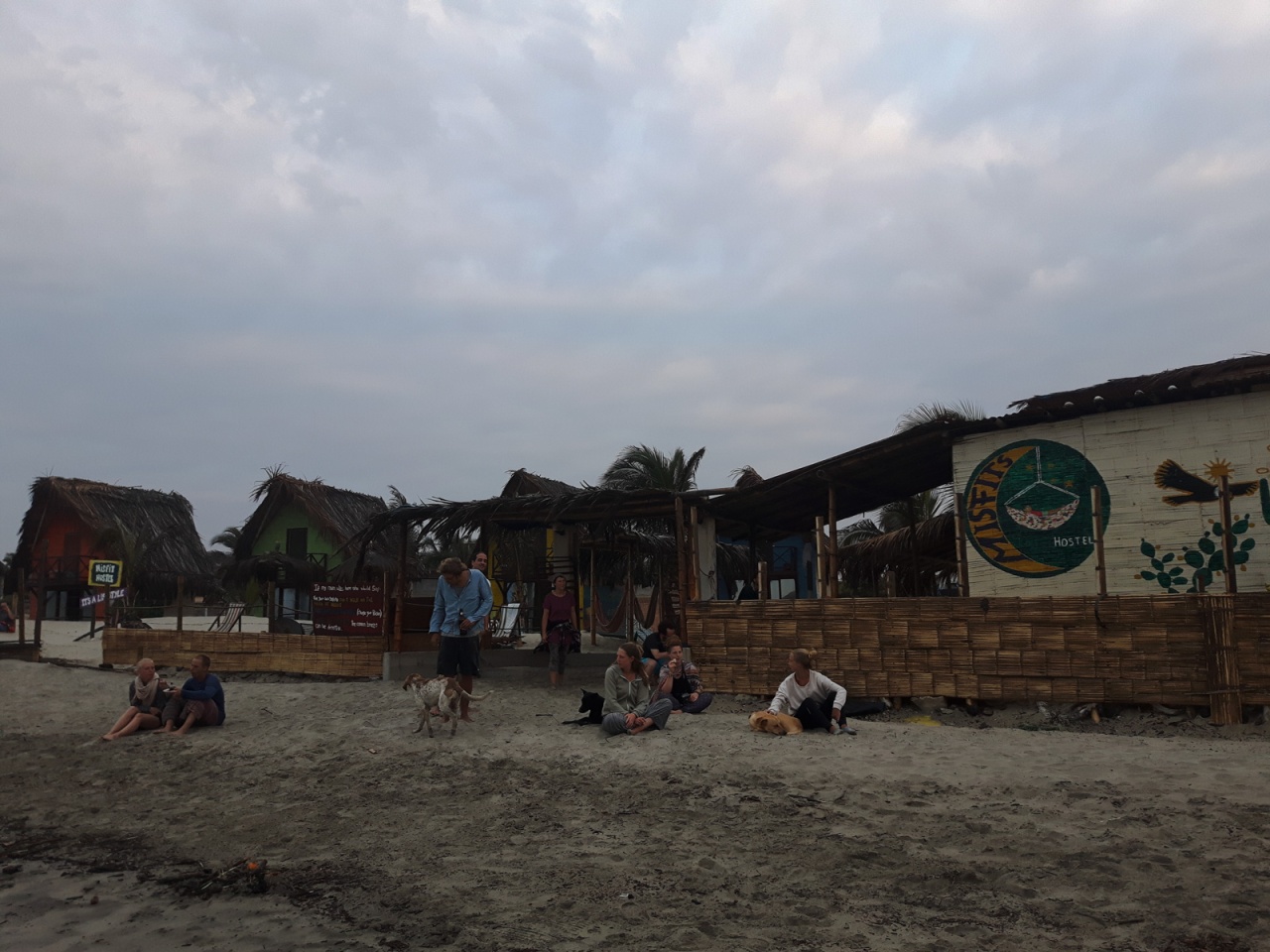 Misfits Hostel is on the beach. 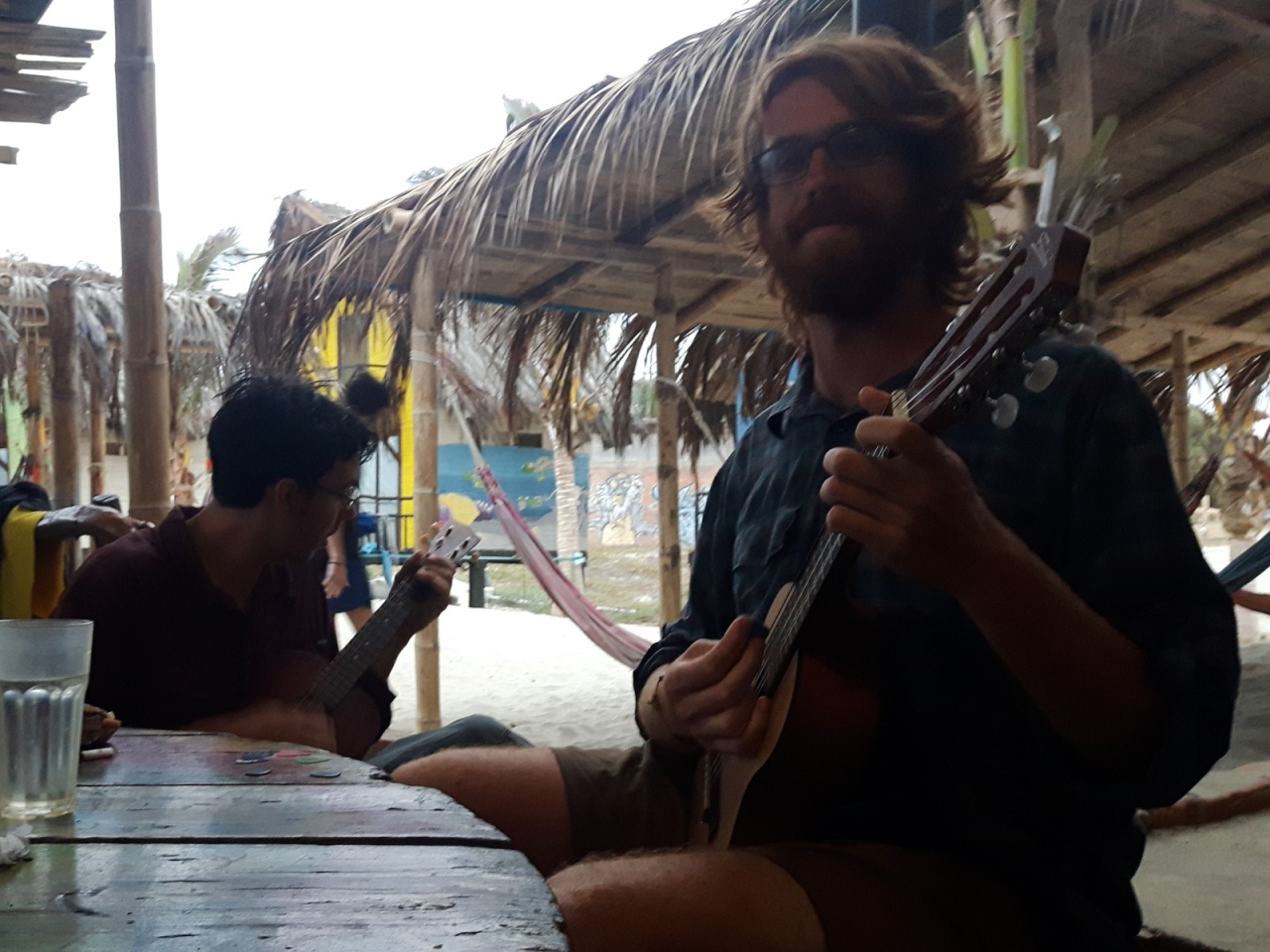 Adrian and Colin were traveling with mini-guitars, and they finally broke them out in Mancora.

One thing I knew is that I didn’t want to stay on the coast – the company was great but the riding was pretty miserable. The question I kept debating was whether to stay in Mancora until Christmas or leave early and make my way to Chachapoyas, where I planned to resume my ride through the mountains. Misfits Hostel was very relaxing, though Mancora itself was pretty ugly and I didn’t feel like I’d get a real Peruvian Christmas experience there, whatever that would be. There was a good crew at the hostel and plans were being made for a Christmas celebration. It would have been easy to stay, but in the end my restlessness got the best of me. After three days on the beach, my bike and I got on a sweltering day bus to Chiclayo and that night I got the last first-class seat on an overnighter to Chachapoyas. I slept as the bus weaved its waved out of the desert and into the Andes.

Once again, I’d be back on the road on my own.

You can view a GPS track of this route here: https://ridewithgps.com/routes/26717103 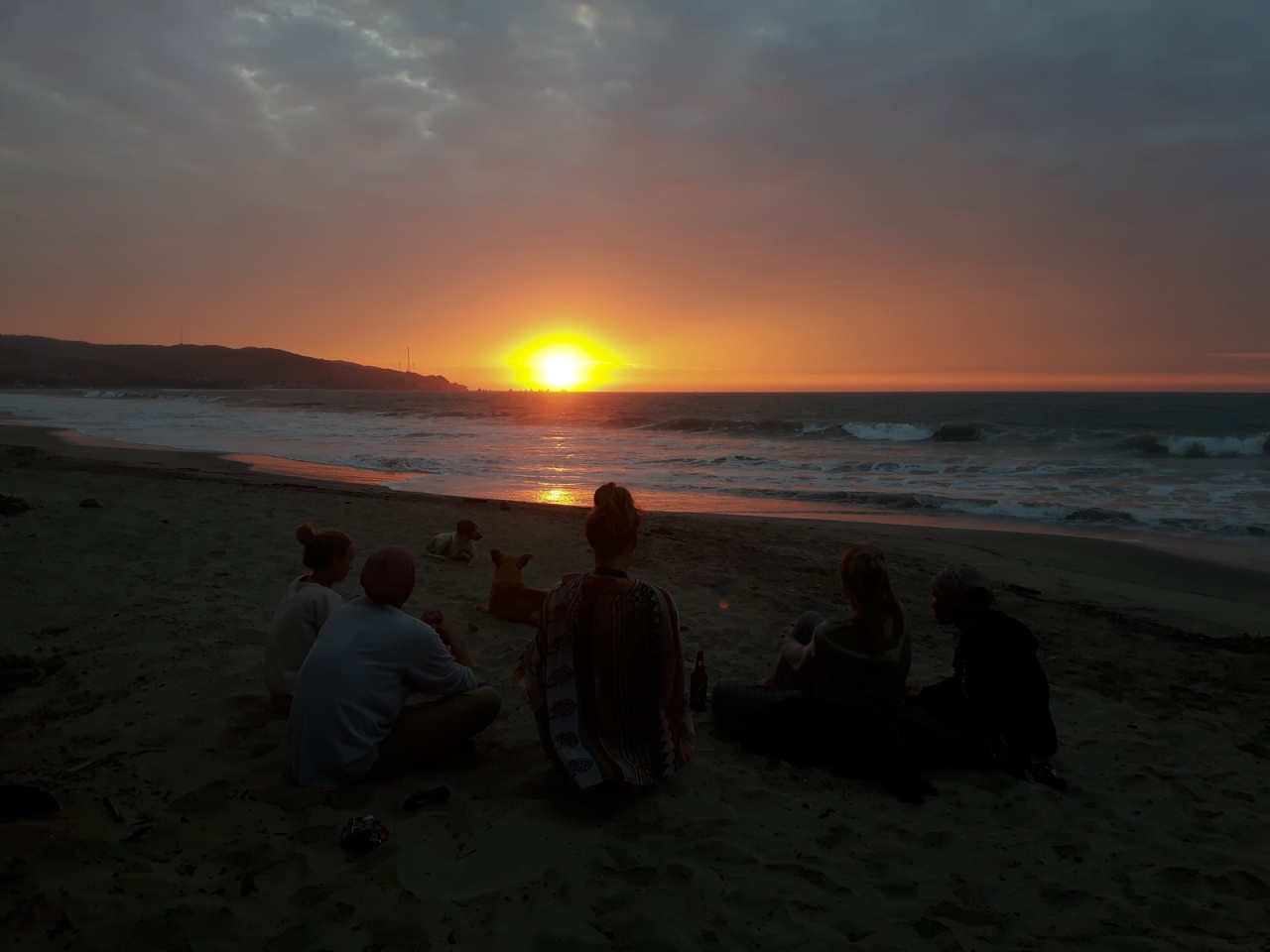